From the Spring/Summer collection of Christian Dior in 1947 there came a tailored suit, which became one of the single most iconic garments ever produced, and launched a broad change in how women dressed, but far more importantly, how they thought of themselves.  That suit was called, simply, Bar. 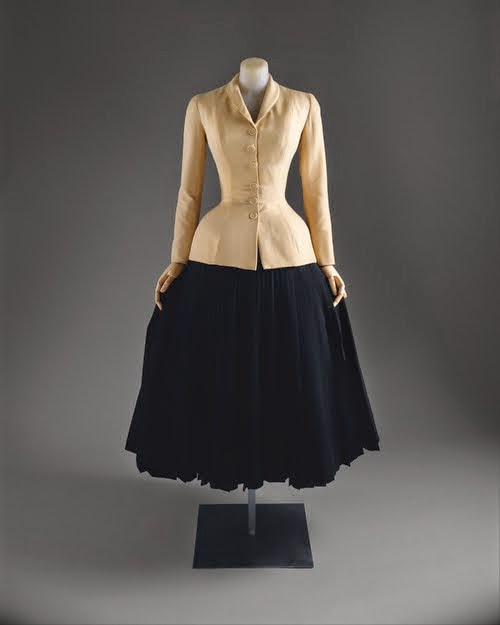 Made with a tightly fitted tussah silk jacket, with a deeply indented waistline and a padded basque that accentuated the hips, paired with a vast pleated black silk skirt that dropped the hemline several inches, Bar was a bald faced shout for change.  As a garment, it was completely different from what women had been wearing the prior decades.  The World War had imposed harsh restrictions, and women had grown used to making do, using less, and having skirts that hung at the knee, but not much lower. They had also grown used to the relative freedom of having had less compression on the waistline in styles for the past 40 years.  Suddenly they were being told that they needed to corset themselves again, and that skirts were about to become more cumbersome. 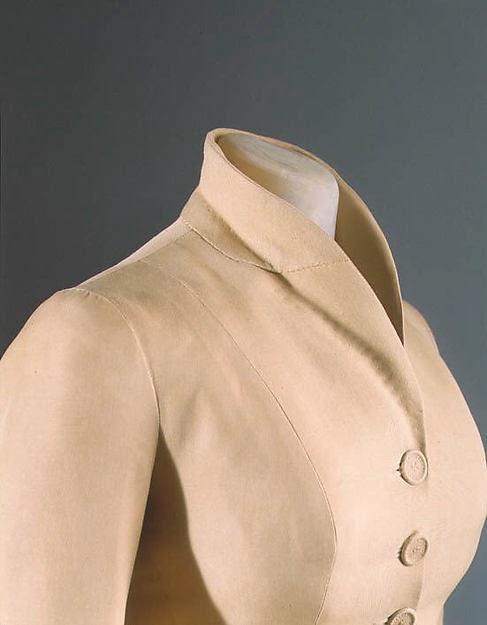 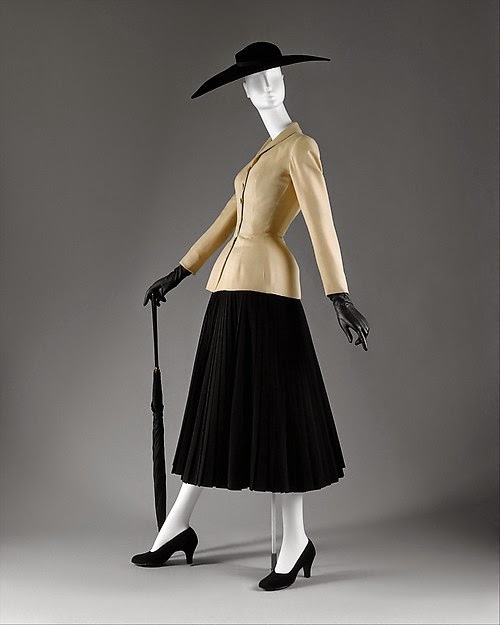 The initial reaction was fiercely divided.  Some women applauded the change as a welcome break with the privations of the past, and rushed to shed the mannish shouldered dresses and suits they had been wearing for 10 years.  They wanted overt femininity again.  They wanted pretty for its own sake, without restrictions.  And so they were ready and willing to clap a copy of Bar onto themselves, and feel all grown up sexy again.
The other reaction, just as pronounced, was staunchly negative.  Particularly in places like England, which were still facing clothing rationing, the extravagant textile use seemed vulgar and wasteful, even unpatriotic.  And furthermore, many women bristled at the idea of stepping backwards to a vision of the female they thought was gone.  After forty years of comparative freedom from corsetry and confinement, the idea of subjecting themselves to it again, rankled.  And psychologically, many women saw it as a method of shooing them back into the kitchen, after a good long time of being out in the world, doing man's work. In the end, the style took hold and the New Look became the dominant style force. More women wanted to divorce themselves from the horrors of the War and the Depression. They wanted to step forward and away from all that, even if it was, in a sense, a step backwards.
Posted by Paul G. Ellis at 8:14 AM