By the end of the 1850s the cage crinoline had reached the physical maximum it could manage; both technologically, and in terms of how well women could navigate a room.  In 1860 that dome d volume began to alter shape.  The transition to the first emergence of the bustle silhouette had begun.
This evening dress by Emile Pingat of Paris is not only a perfect example of that transition of shape, but also of the coming vogue for the "more is better" ideal that flooded the Victorian era. 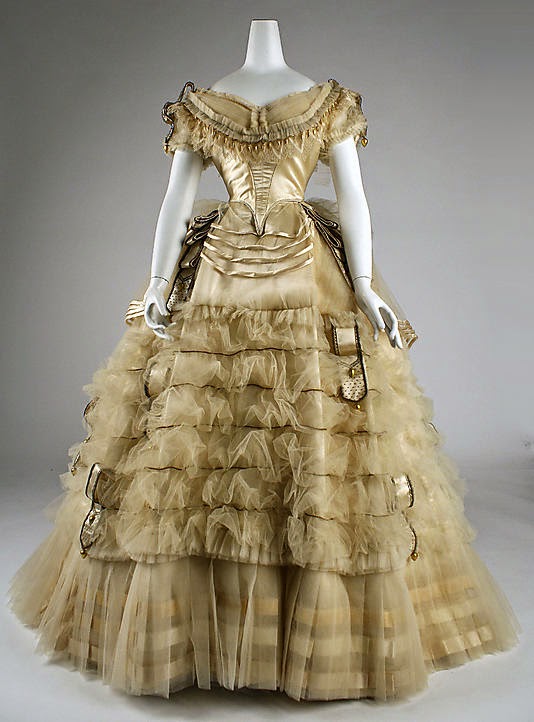 Seen from the front, though the bodice is relatively unchanged from the style in vogue for the prior decade, the skirt is no longer dome shaped, but has become narrower, and conical.  Seen from the side, its obvious that the cone shape is not uniform.  It skews slightly backwards, drawing the majority of the skirt volume behind the wearer. 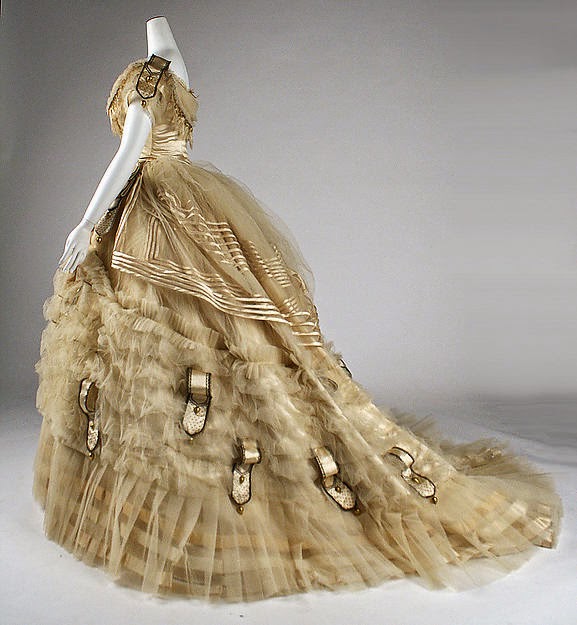 Its also apparent from the recognizable draping in the center back, that will be a defining feature of the bustle, is already making itself known, albeit in silk tulle. In short order this manner of bunching and draping at the base of the back will become a ubiquitous part of women's dress, and be rendered in all manner of textiles. 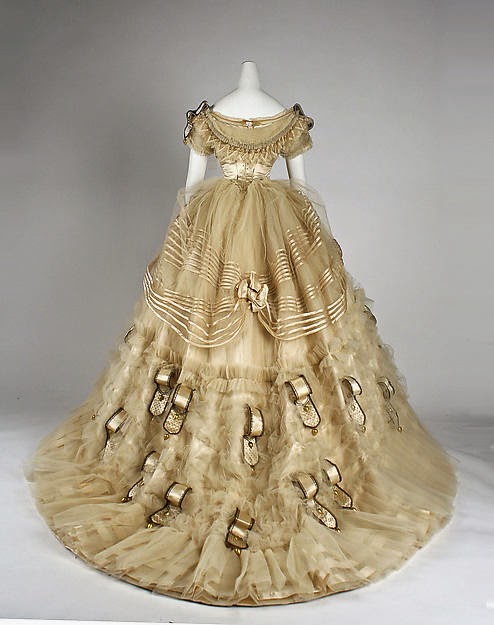 The other significant alteration of style is that "more is better" thing I mentioned. Where the shape of the dress is quite elegant, there are really far too many detail elements in play, including the large, stiff looped tabs scattered on the dress and bodice.  Also, on the skirt alone, the off white silk tulle has been worked in 5 different ways. It has been gathered, ruched, puffed, and pleated in two different manners. 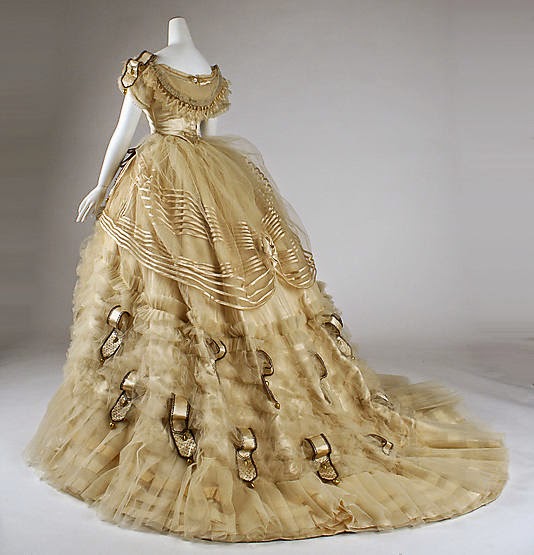 There are, as well, the multiple rows of bias silk banding appliqued onto the tulle over-skirt, the lace, the looping, pendant beadwork on the corsage, the beadwork on the dress tabs, and the alternating colored ribbon bands on the under-skirt.  Its a lot of a lot.  But in the very near future it becomes the very thing. 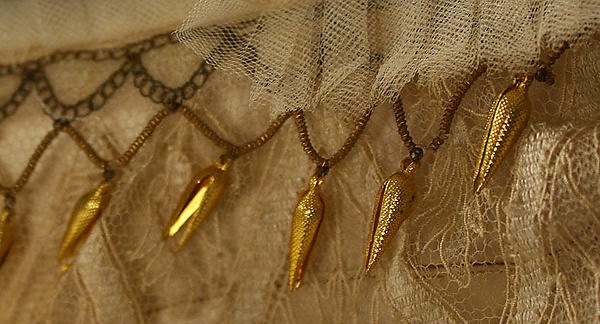 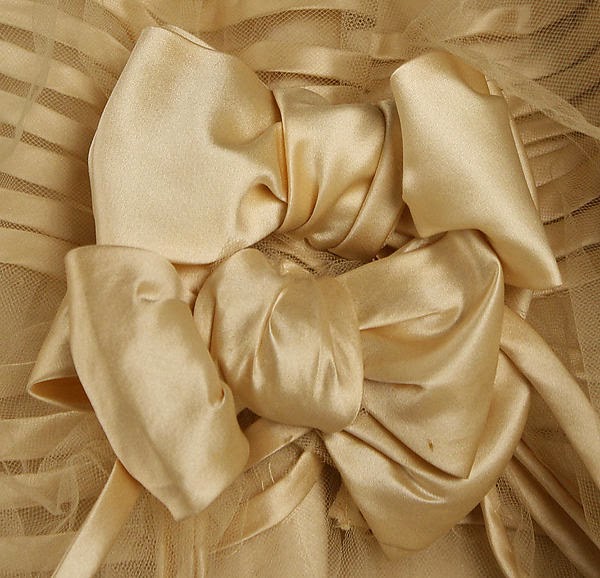 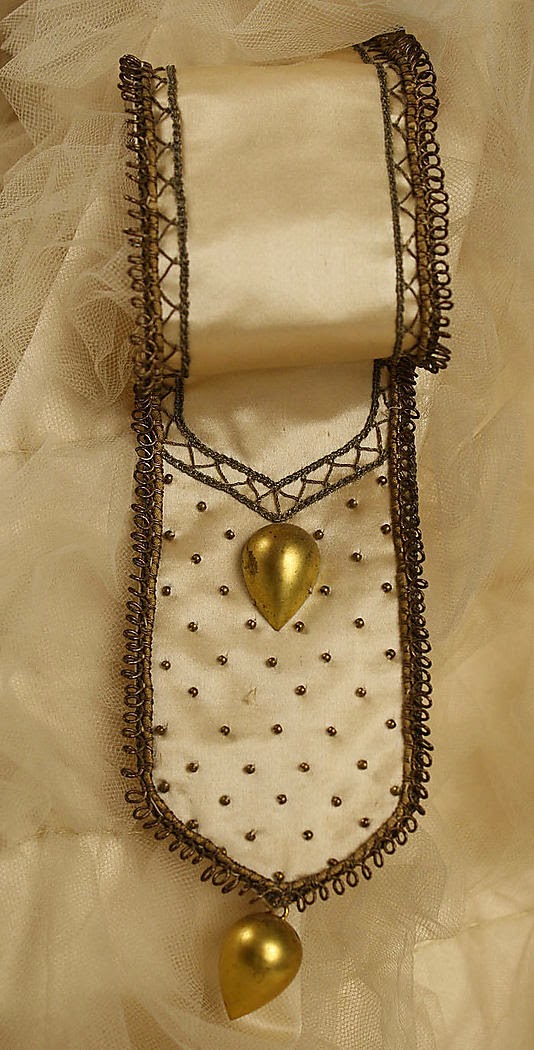 As Mr Elias Howe's sewing device gains more and more users, it becomes needful for a lady of fashion to distinguish herself from the rest of the crowd, not only by good workmanship and fine materials, but by ladling on as many decorative details as possible.  It becomes the go to method for maintaining class distinction, and remains that way for another 50 years.

Grateful thanks to the Metropolitan Museum of New York and its astounding collection for the images of this amazing garment.
Posted by Paul G. Ellis at 3:55 AM