The Psychology Of Decades, Part Five

With the playful slap of the Roaring Twenties, soon came the combined gut punches of the rise of fascism and the Great Depression. To say these two enormous events had an effect on how people felt and thought, would be an embarrassing understatement. Almost overnight the giddy explorations of the 20s were over, the feeling of endless youthfulness was gone, and the mainstay of the culture felt a deep sadness and fear leaching the joy from life.  Even the wealthy were touched by the events that shaped the times, as many of the rich were toppled.  And millions went jobless, hungry, and homeless.  Even Nature itself left us standing alone as the Great Dustbowl ravaged the plains and made Americans for the first time fearful of where the food would be coming from.
There were two primary ways that these feelings of gloom, betrayal, and uneasiness made themselves known in how we looked. 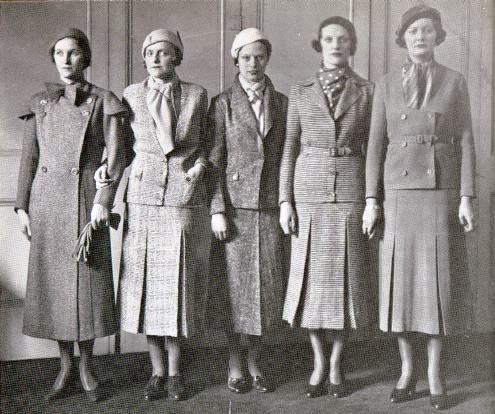 First was a striking, a sudden overarching seriousness that took hold of women's clothing at all levels.  The look for women had aged visually, a good ten years.  The ideal woman was now in her later 30s, possessed of knowing intelligence, and a grace born of experience in the world. 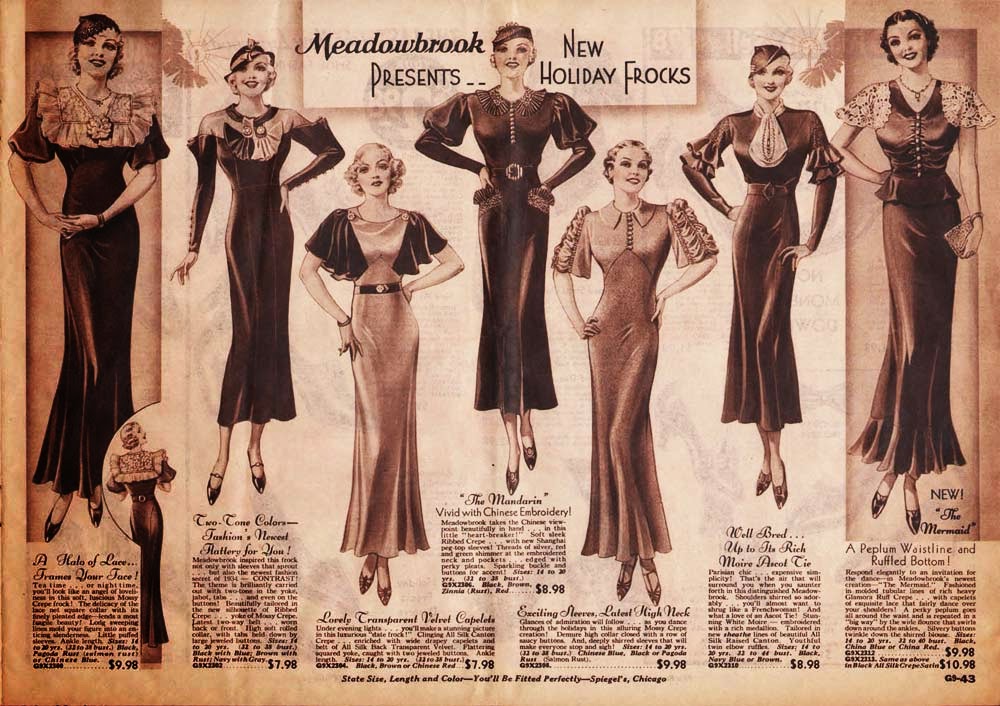 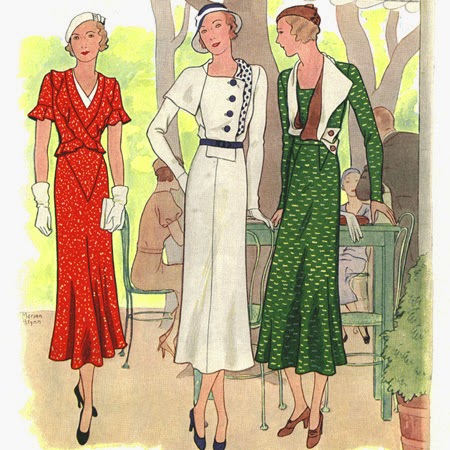 Her clothes were more sober, the lines of them longer, leaner and more overtly grown up looking. Sexy looked different too. All of a sudden the look was frankly provocative, not teasingly girlish, bodies revealed through a single layer of bias satin that glided over the frame like a lover's hand. 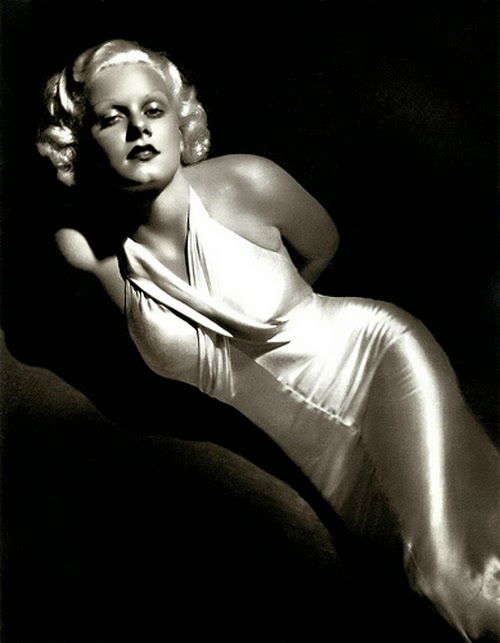 The second major influence on Attire visuals was the Surrealist movement.  There was something that resonated culturally for many people in that movement's often dark and disturbing juxtapositions of unlikely things.  It was a way to both face the uncertainties of the day, and somehow avoid them at the same time. 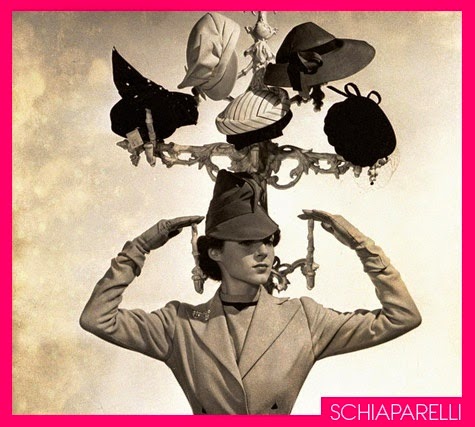 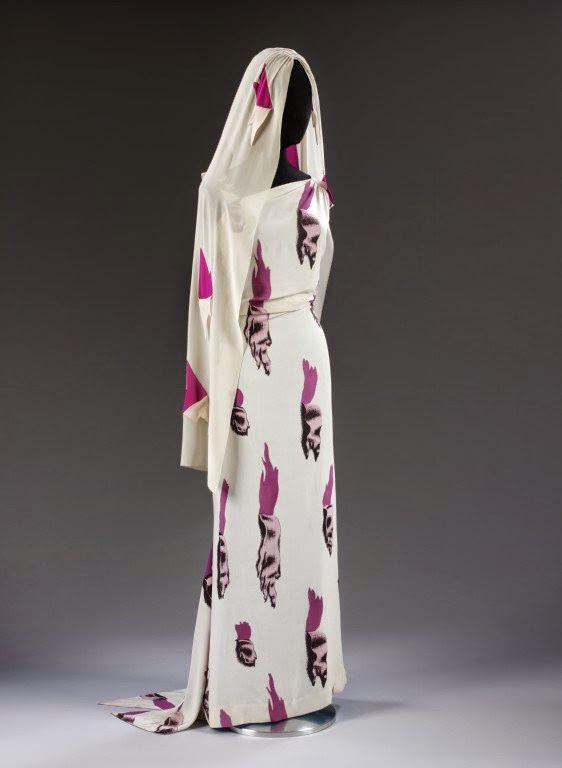 And Hollywood embraced Surrealism fully, promoting the movement in sets and costumes throughout the wide range of films being done, permitting what might have been a small artistic movement to become a greater part of the social consciousness. I find it interesting, as a side note, that in these similarly uncertain times, surrealism has re-emerged as a strong visual force in design and art, though with a much darker spin.
As the problems intensified with the widening depression, and the dark presence of war tapping on our door, manifest apparel became even more refined, and quietly ladylike, rather than jubilantly insouciant.  Colors, in the main, became softer, and the often glaring contrasts present in the fashions of the 20s were replaced by softer combinations, and a greater reliance on texture.
And then the unthinkable happened. War.  A bigger, nastier, more potentially devastating conflict than in all of human history broke out, and involved a greater percentage of us all in its madness than ever before.
As nation after nation committed themselves to fighting the growing aggression, unprecedented amounts of materiel were needed to push that effort forward.  As a consequent, more than one country instituted regulations governing the usage of textiles and the freedom of citizens to purchase clothing.
The serious note that had existed in the 30s extended, with greater intensity, into the 40s.  The attire of women became boxy, simplified and reliant on scraps and snippets for decoration.  A typical dress in the US was allowed only 2 yards of material, no excessive pleats, no ruffles,  no patch pockets,  and no attached hoods or full sleeves were permitted. 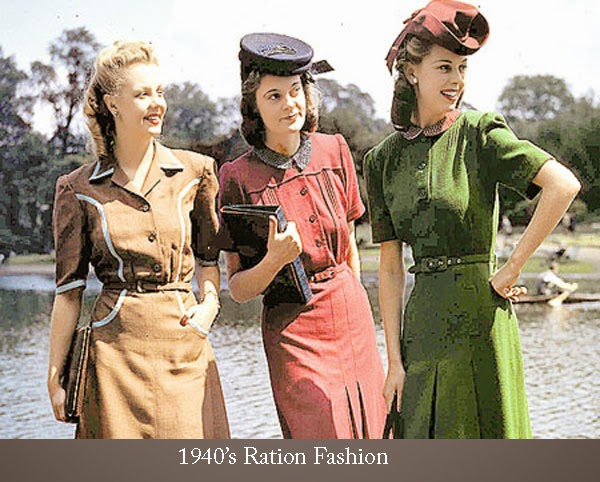 A suit was allowed no more than 3 yards of fabric and the same other restrictions applied.   The physical manifestation of the people's feelings about, and commitment to the war, resulted in that concept known as the Victory suit. 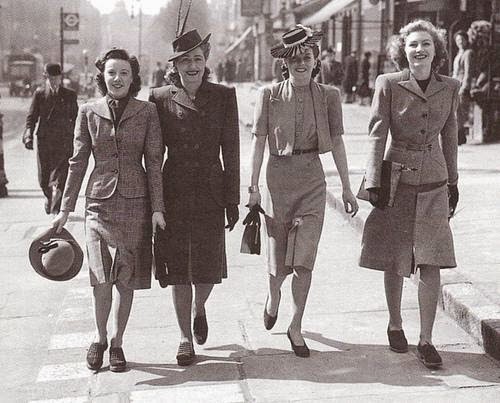 And women everywhere were patching up, altering and otherwise making do with what they had, since clothing manufacture had dropped a stunning 50 percent.
As had happened before, the only place where women could express their originality was hats.  Hats made from tiny scraps, newsprint, wood shavings, anything and everything that wasn't rationed or proscribed got used, and some of the most fantastical chapeaux ever were created. 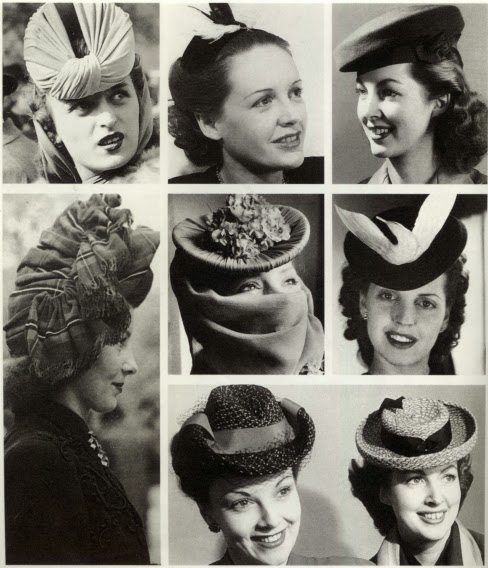 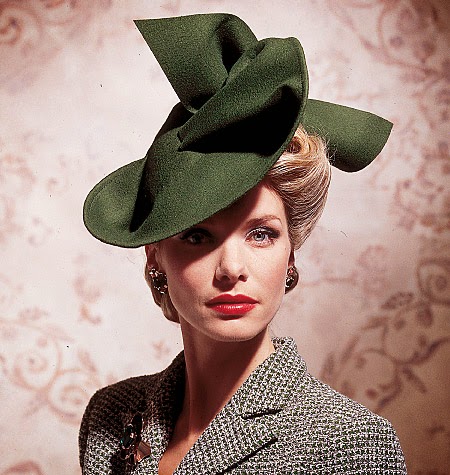 The war ended in 1945, and what happened next?  Well, many people were still under wartime restrictions, but all that holding back had gone on a long time, so the release, when it happened, was quite a sight to behold.
More tomorrow,...
Posted by Paul G. Ellis at 4:28 AM