One Shot-The Robe a la Francaise

Every now and again I come across something so fine, and so exemplary of is time, form and expressive capacity, that it deserves to be looked at in more detail than I can present on the facebook version of Attire's Mind.  So, with that in mind I've decided to start doing what I will call One Shot.  Occasionally I will One Shot a particular type of garment, or one that is just so flat out amazing and beautiful that I really just gotta share it.
For this first go around its going to be the robe a la francaise, which was without question the single most influential garment for women in the 18th century, and which has been referred to again and again since then by many designers; so that, even though its no longer worn in its original state, it still speaks. 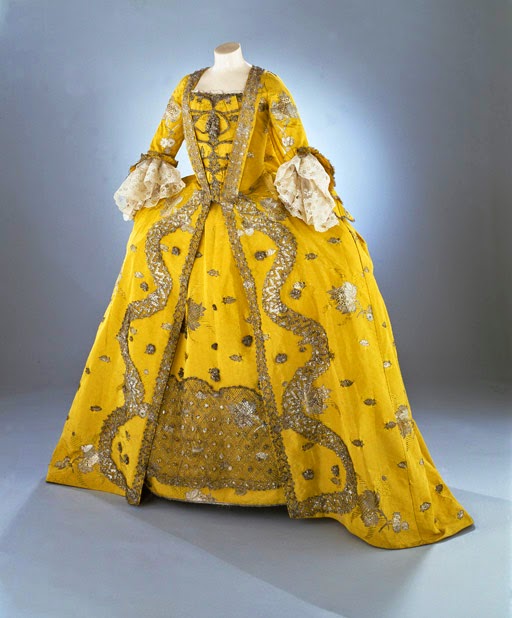 The particular robe We're looking at is of English manufacture from about 1750. The brilliant butter yellow silk is made in Spitalfields, where the majority of the best silk textiles were made in England.  This fabric is a combination plain weave and brocade, where the brocaded portions are worked in silver wrapped silk thread, in a pattern of scattered bouquets, and individual flowers and leaves.  Such a fabric would have been used for only the most formal of occasions, since its obvious cost would make it the perfect thing to use to indicate the wealth and status of the wearer.  Part of what makes this fabric notable is that it bears the mark of typical English restraint. A French or Italian fabric would have been more elaborately brocaded. 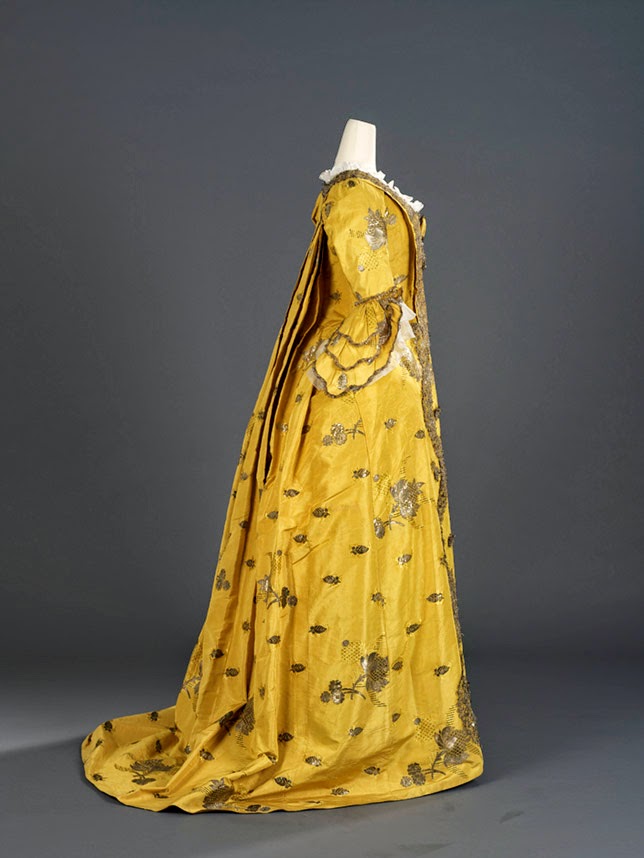 In terms of shape this gown is the epitome of the style.  Everything in both proportion and line conforms to the precise details of the mode.  The width of the panniers are about equal to 1/3 the height of the person, giving a graceful balance to the shape, where in later years that width would commonly expand to ludicrous dimensions.  The falling pleats hanging from the center back are doubled, according to the fashion, and the half length sleeves are ended with a series of three graduated scalloped cuffs. 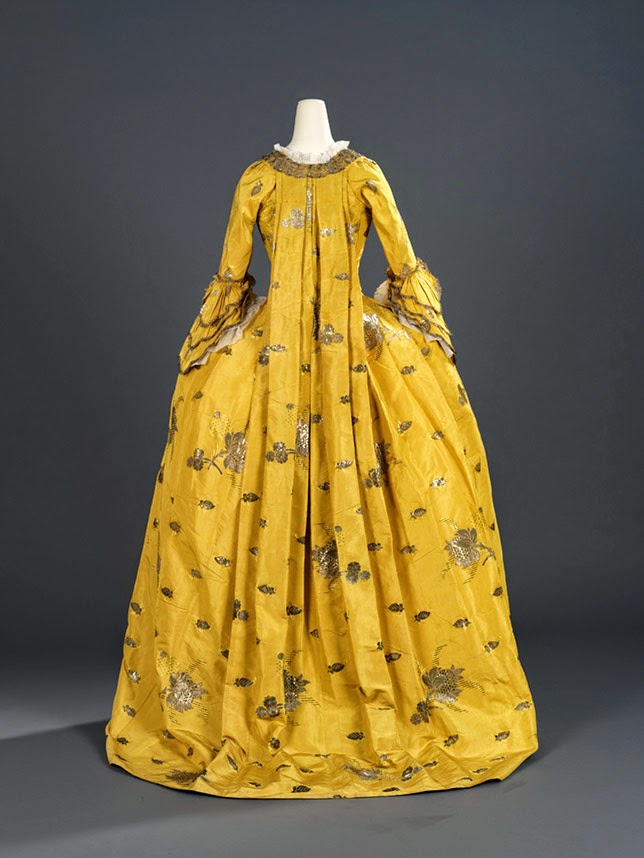 The matching stomacher has the rounded bottom that was en vogue in that period, and it is decorated with a ladder of bows edged with narrow silver lace. 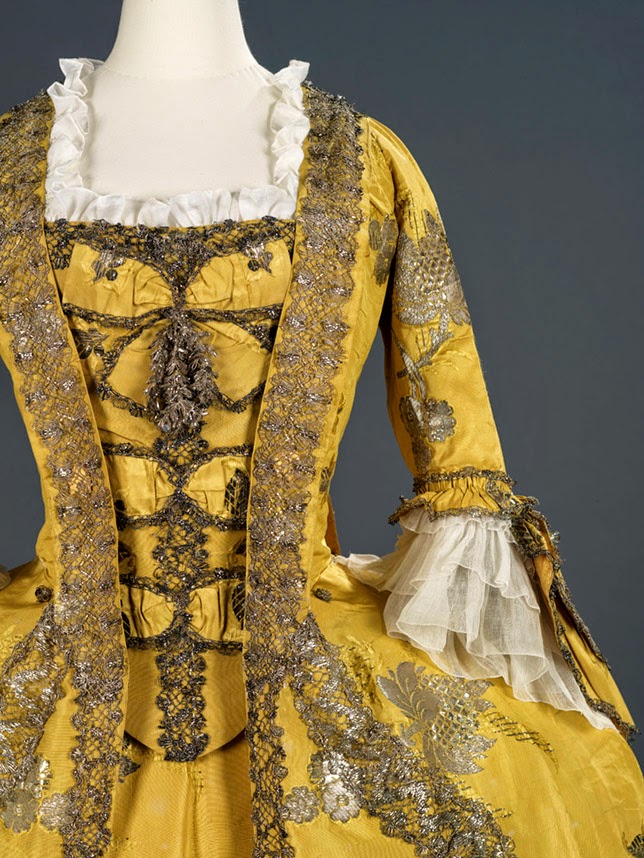 The petticoat is very simply dressed, with only a broad flat panel of silver lace on the lower half.  Very often the petticoat would be very heavily decorated, but I suspect the enormous cost of the silver lace would have made it seem too much to add more embellishments.  Anyone observing this gown would know instantly that the person in view was either vastly wealthy, or vastly in debt, and without question a person of consequence, which was, after all, nearly the entire point.
The gown itself is also decorated with silver lace in a serpentine pattern worked in the flat.  If the woman who ordered this gown had had the money to afford to use the lace ruffled, it would have trumpeted her supreme wealth immediately.  But this lady probably had to content herself with the flat lace because of the crushing expense. Why was it so expensive? the reason was not just the cost of the silver, but the physical nature of silver thread.  Whether its wrapped in silver wire, or silver strip, it makes the lace manufacture process even slower and more painstaking.  Metallic threads are far more likely to kink up, meaning that great care and attention needs to be given to every single action. Plus, the continuous bending of the thread makes the likelihood of the surface wire, or strip, breaking, that much more possible.  End result?  A long and labor intensive process becomes a good deal more so. 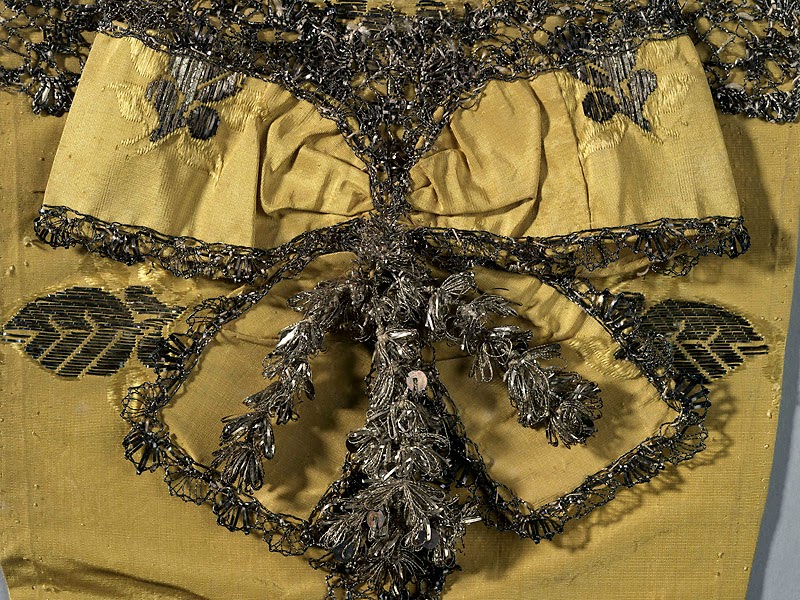 What is not readily apparent though is the lightness of gowns of this sort.  Though the silhouette appears monolithic and stiff, the fabric was quite light and mobile, and with the panniers lifting the skirts away from the body, walking and dancing were really quite easy maneuvers.  All in all, gowns of this sort were meant to convey many things.  Status surely, wealth, of course, but also a good deal of flirtatiousness, and sexual desire.  That broad square bodice opening could be a serious invitation depending on the presence or absence of any ruffle at the opening. 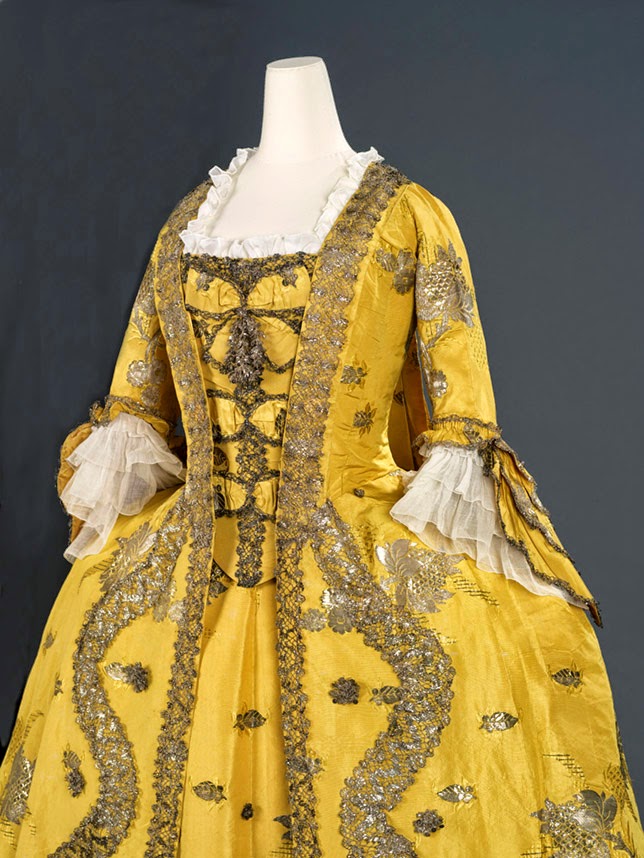 Though it isn't considered sexy now, the exposure of the elbow was considered quite provocative, so the cuffs always fell beyond that point. And finally, the underskirt hem was always just a little higher than the gown, because a gentleman could occasionally get a delicious glimpse of foot and ankle.
Back in the day, being sexy was a very different business.