Scatterday is Saturday!  Here we go, folks. Hang on tight!

Starting us out with a stark blast of glam, that model of a models, Dovima, in Dior, in Paris. This town suit is from the H line, and I love the sharpness, clarity and architecture of it.  She has become modern art in the hands of photographer Irving Penn.  And how about THAT for a winged eye?  She was glam personified in her time.  The suit became one of the go to looks for women. It was trifle less fitted in the waist, so it was more forgiving to the less reed-like among us. 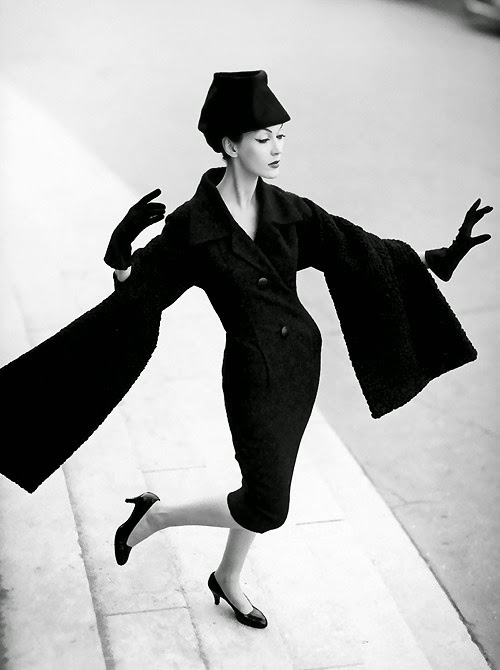 Next out of the gate, these 4 tartan bearing fellas.  Though the tartan plaid began as a signifier of clan affiliation, it has spread world wide.  Its now possible to go to some of the classic kilt makers and get a custom tartan done up for yourself, that will be registered under your name.  Also, there are tartans for cites like New York, Paris, and London, a Gay Pride tartan, and even a tartan for the State of California.  With that in mind, the clan associations are fading fast, though the love of the tartan plaid is with us still. 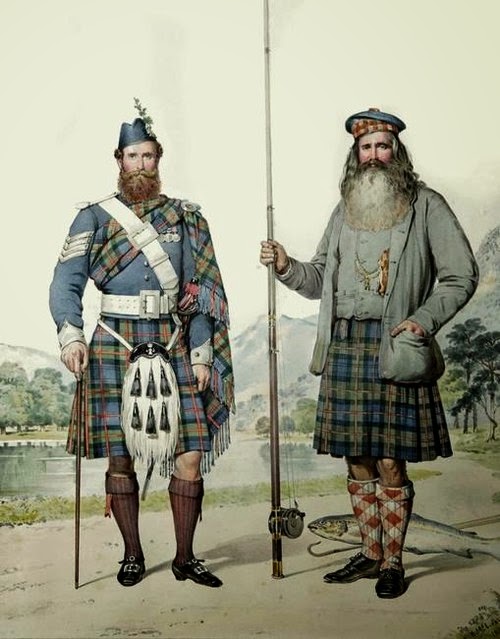 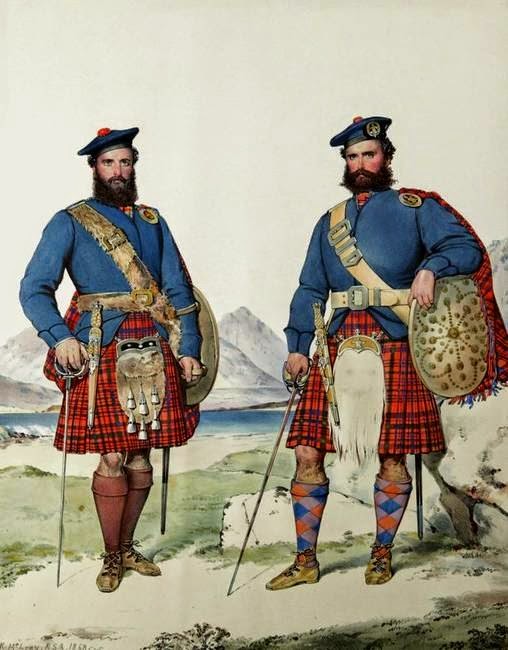 Sometimes politics and Attire mix it up to good effect. This is a robe a la Polonaise which gained favor in the late 1700s with the partition of Poland into three segments.  Now, looking at this dress one might easily wonder how it relates to political border divisions.  Well, the over dress is gathered up on the sides and back into three distinct sections.  It was commonplace, particularly in French fashion to subtly refer to current events in such a manner.  This fashion managed to survive because it was very attractive, and also practical for walking. 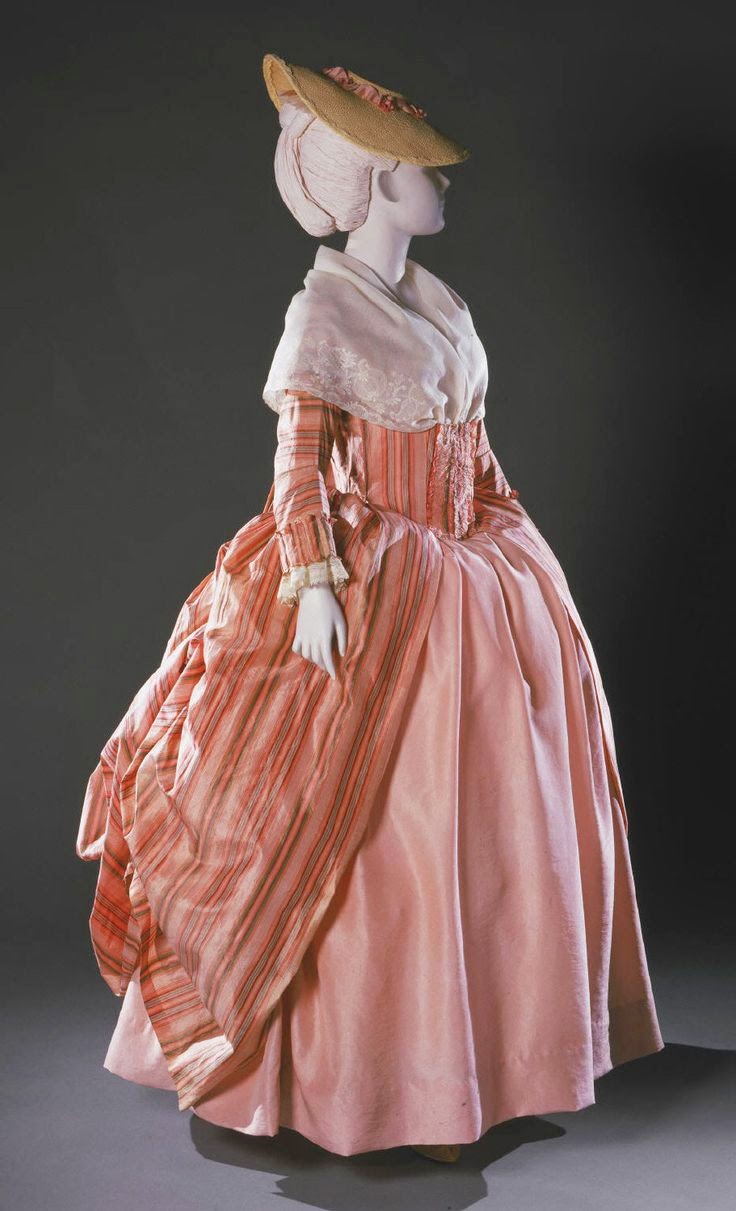 Women are far form being alone is suffering indignities in the name of fashion.  Behold the Kaiser Mustache Trainer. For only 50 cents a gentleman would have the dubious honor of wearing this undoubtedly uncomfortable device to bed in order to train his mustaches into good order.  If you've ever watched the film of Murder on the Orient Express, you've see Albert Finney, as Poirot using one. 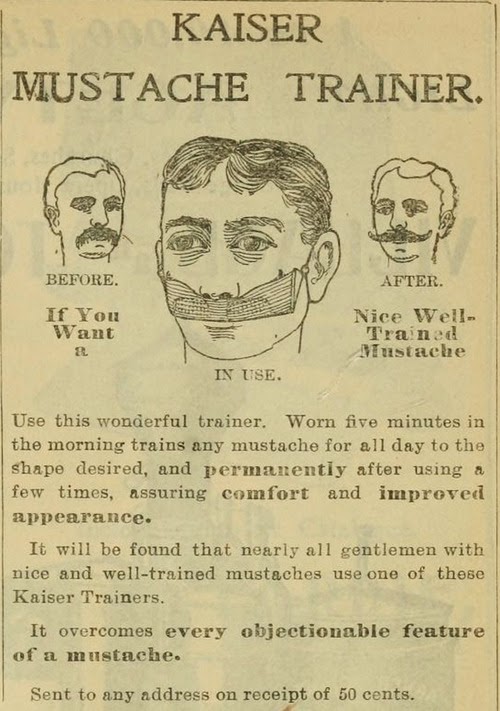 Next, a couple of avant garde pieces that deliberately reference other ages.  The left hand one not only mimics the huge ruff collars of the 16th century, but also the drum farthingale.  The right hand piece is an homage to the riding habits and militarism of the later 18th century, when Marie Antoinette made it fashionable for ladies to wear menswear styled clothes for riding. 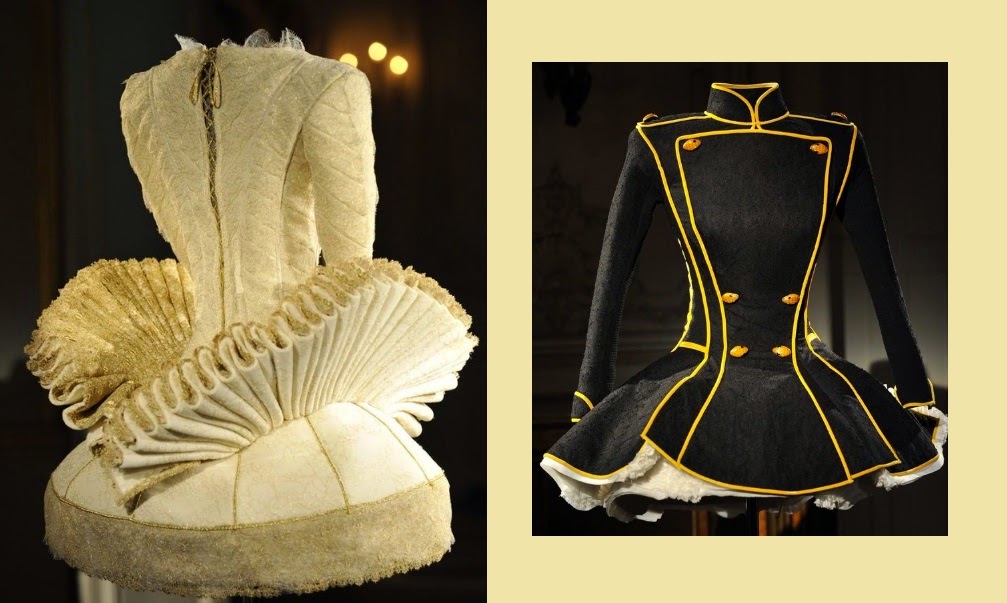 In the 1920s Franklin Price Knott shot this autochrome of a 9 year old Balinese dancing boy.  The boy's air of self-possession and poise are at one with the formality and glittering surface of his apparel.  I love the complex patterns in play here and the perfect visual balance between his headdress and the volume of his costume. Giovanni Jacopo Caraglio created this portrait cameo of the Queen of Poland sometime between 1530 and 1540.  The cameo is mounted in a beautiful, (but sadly damaged) scrollwork frame of gold with red, green, blue and white enamel.  Its enhanced further with a ruby, diamonds and a large pendant baroque pearl.  The use of enamel in jewelry was very popular at this time and reached an extremely high level, only ever surpassed by the House of Faberge'. 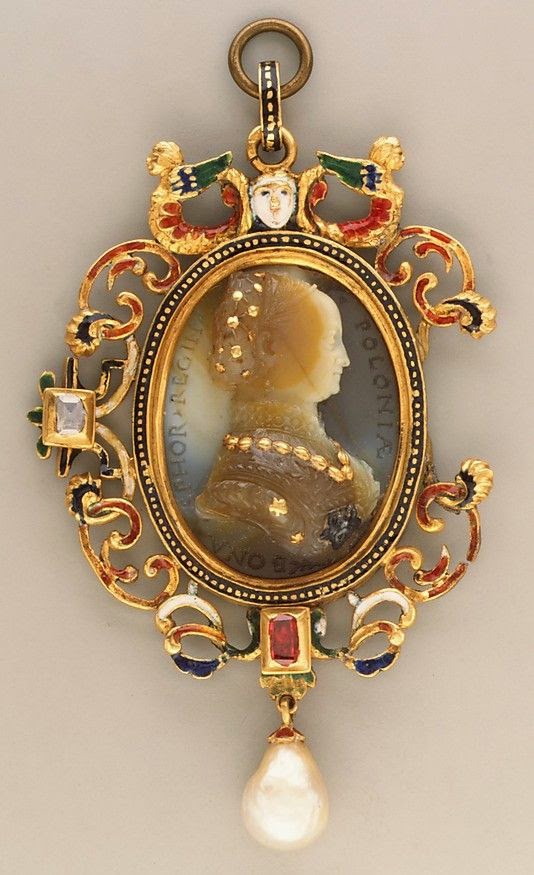 At first glace you might think there isn't much to be said. Just a cute hipster boy.  But the outfit is one that really appeals to me, especially that sweater coat with the points.  It takes the essentially unremarkable other elements and lifts the whole thing.  A well chosen Attire word has power, my friends, to help the mundane speak with more eloquence. 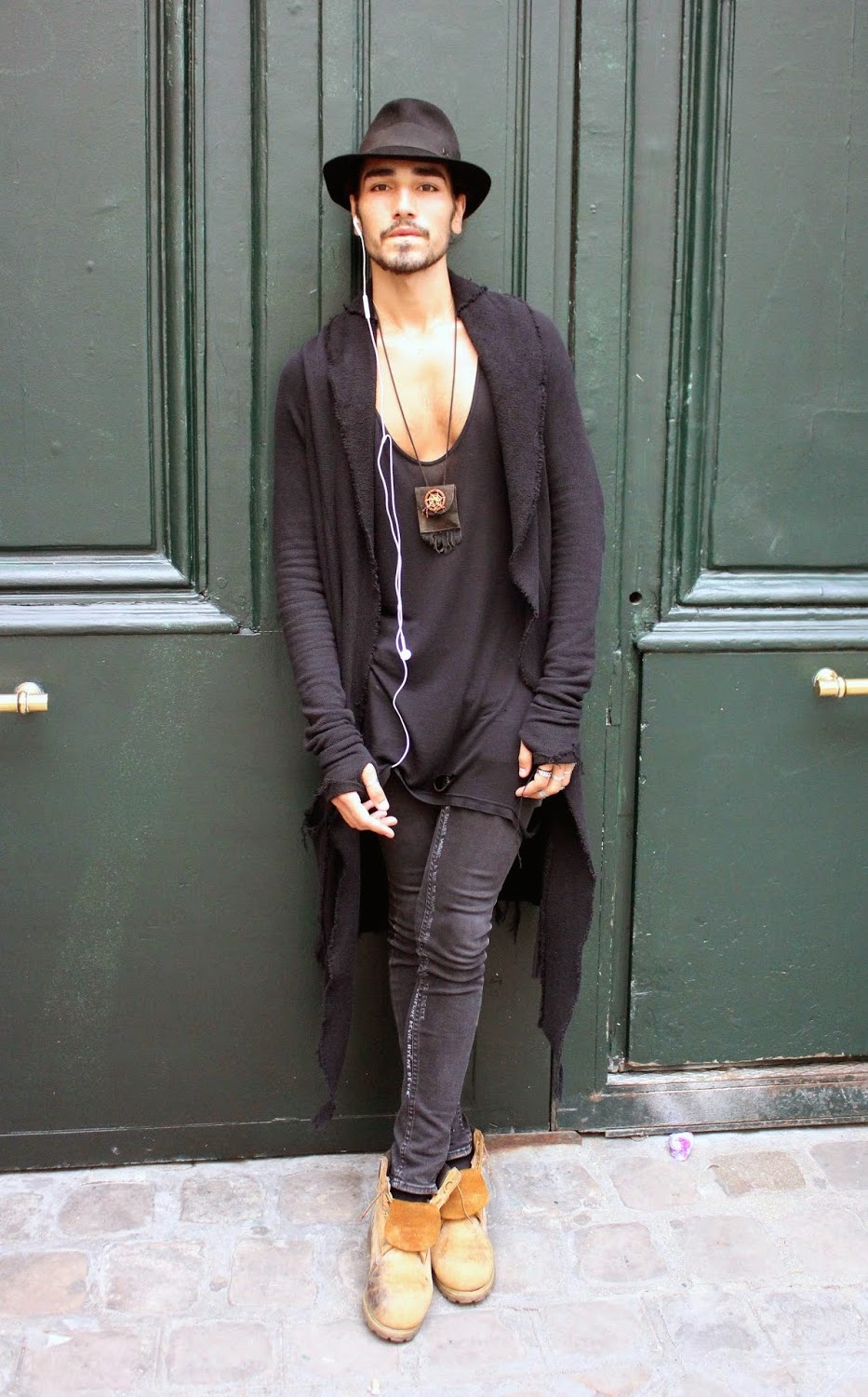 Yes, this really rather silly, overall.  A mite too arch, in fact, but sometimes I love an editorial image, not because it makes me want to run out and try that look but simply for the pleasure of the image. The only thing I could want to see taking off in real world terms is that hat. I think a lot of guys could make this work.  Nothing quite like a broad brimmed topper to frame a face well. 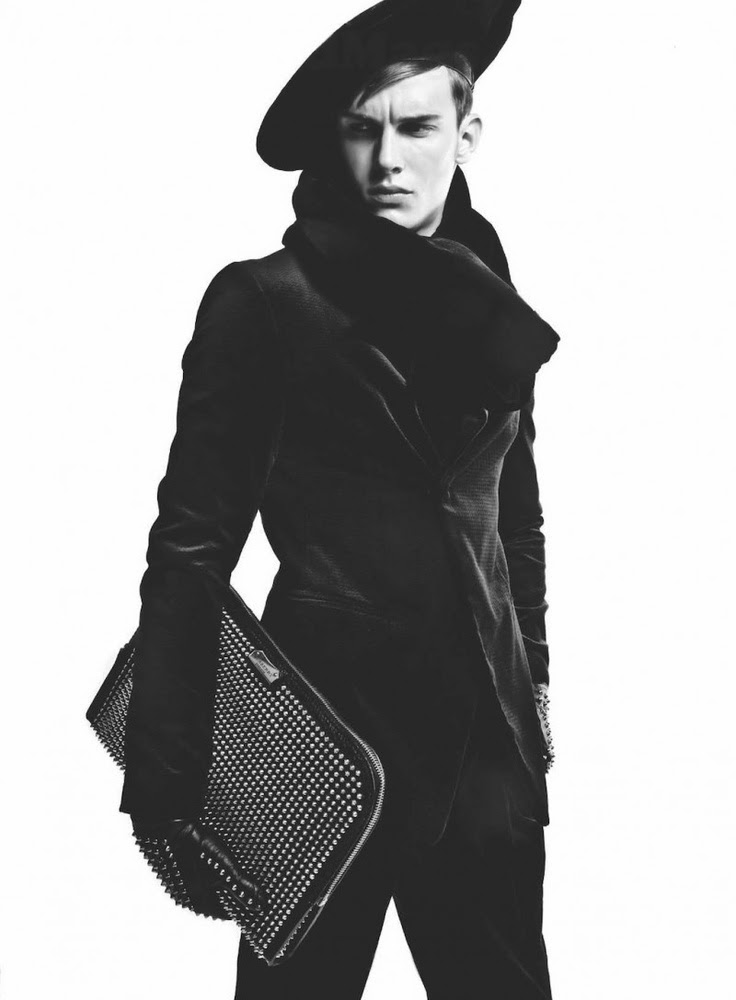 And making a short guest appearance, Greta Garbo costumed by Gilbert Adrian in a promotional still for Mata Hari.  Was she anything like the real deal?  Of course not. Were her clothes in the film referential to either the time or place?  Not one little bit.  But was she an unforgettable image of woman? Yes, undoubtedly.  Her primacy as one of the most beautiful women of her time can now be looked at as a reference to how our notions of beauty alter decade by decade. 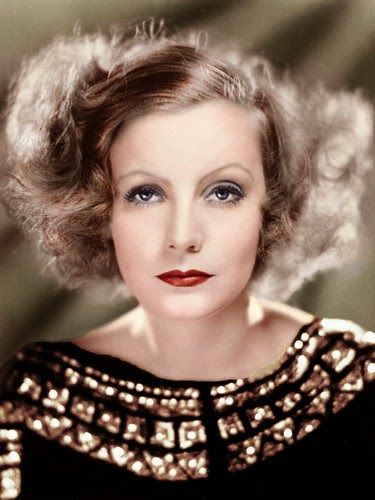 That's it for this week's edition of "Roaming Through Paul's Overcrowded Noggin".
Have a wonderful weekend, everyone!