Happy Saturday, Everyone!
Here comes your scatter for the week.

Photographer Anoush Abrar shot model Annie Kortleve in this intriguing evening dress.  What makes this work for me is not only the strongly Surrealist aspect to it, but the unusual method of emphasizing the Heart embroidery through the sunburst gathers of the chiffon, so that structure itself becomes part of the decorative strength of the piece. Most assuredly this is not for any but the most adventurous of dressers, but the poetry of it is wonderful, and paired with the right person, this garment could help lift them to the level of mobile art. 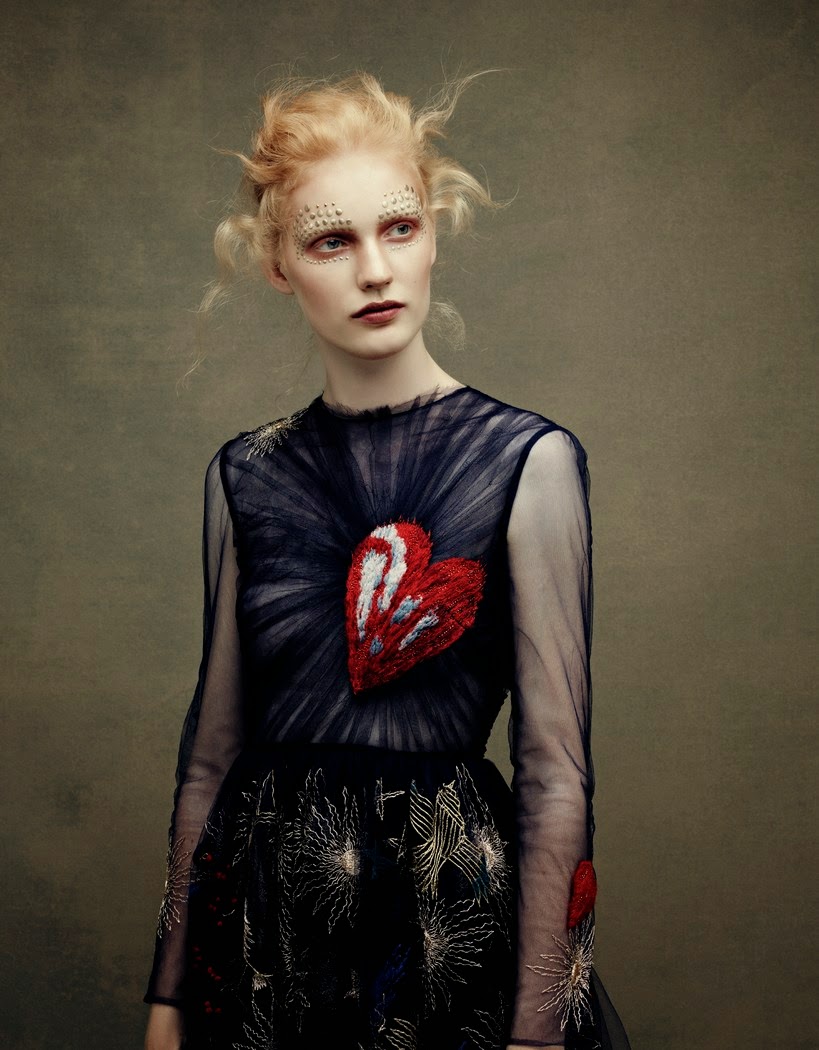 This suit is from the S/S 2015 collection by Joao Paulo Guedes.  I'm posting it because it is both a success and a failure for me.  In that it breaks up the traditional suit to a degree I'm all for, as you know. And the pattern has been admirably well matched across the body and onto the shoulder line. And I even like the broad brimmed hat the outfit has been styled with. There's an almost quaint feel to it that I like.  Where this fails for me is in details of construction.  In men's suiting there is a usage of interfacing, that is basted carefully to the back of the face fabric in the lapel area and the fronts of the coat.  Done properly this is what gives a man's jacket that appealing roll to the lapels.  In this case the interfacing layer is either inadequate or absent, and if there, not done properly.  The lapels turn sharply, where they should arc smoothly.  I know its a quibble for a lot of folk, but it bugs.  What can I say? 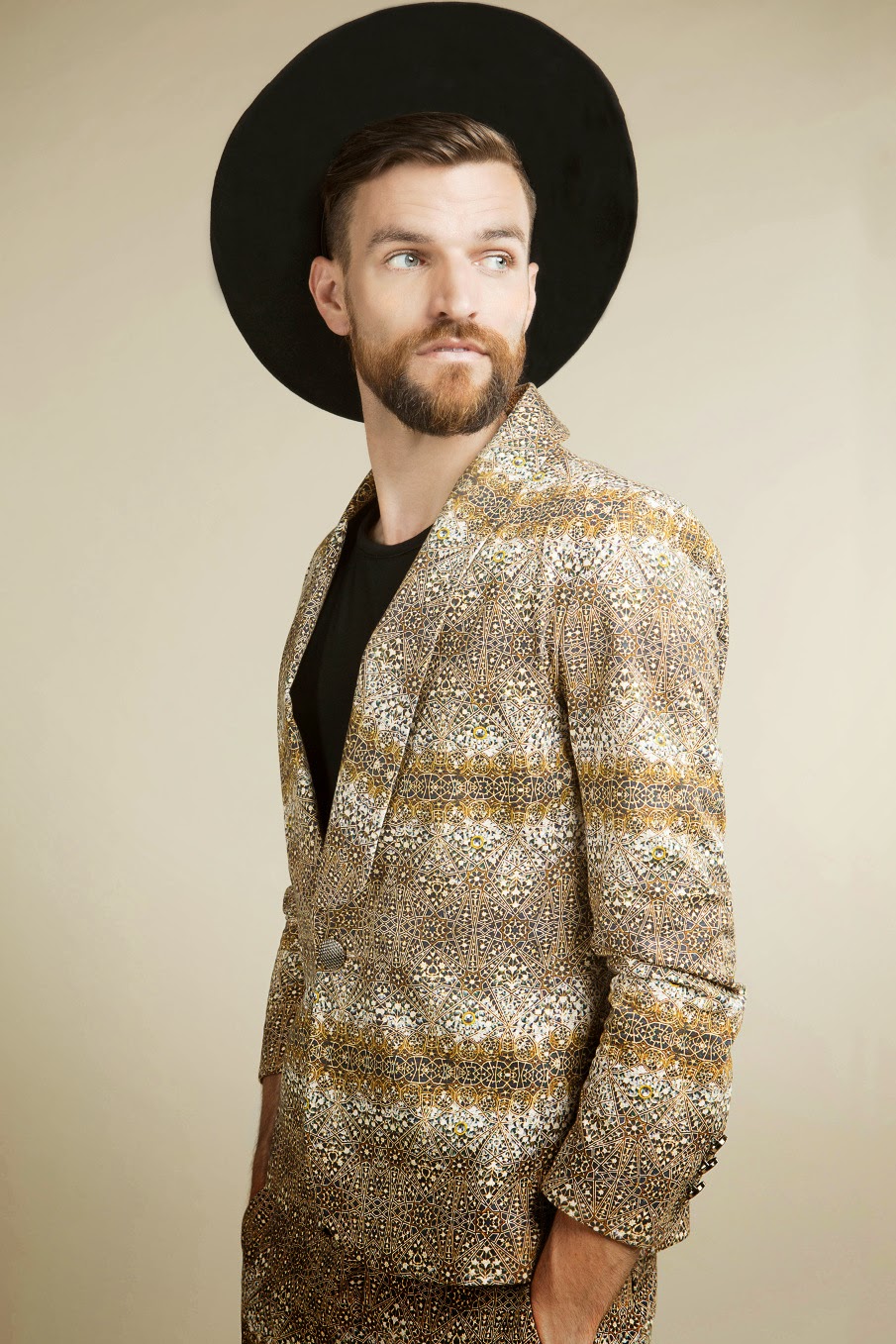 The jeweled choker is an item of jewelry that had enormous popularity during the final decades of the 19th century and into the 20th.  This one is quite amazing looking.  Created from emeralds and diamonds, mounted in platinum and gold its a real fireworks display of luxe.  I don't have an age for this one, though I strongly suspect its from at least the 20s, possibly later.  The design style looks too contemporary for it to be a 19th century artifact.  But as a piece of eye popping bling, its a serious player.  What would you wear it with? 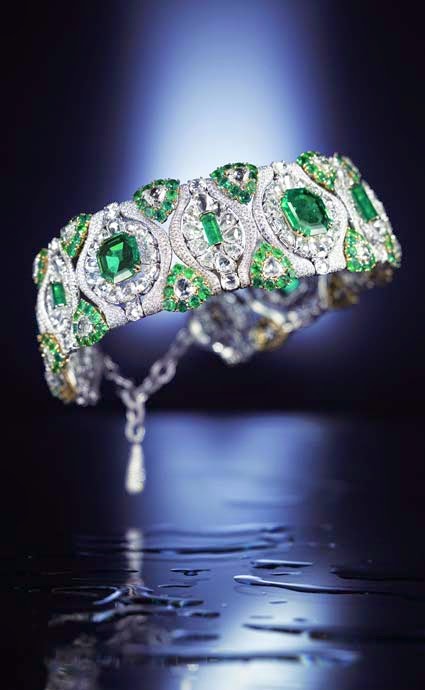 This painting made me literally catch my breath.  As a work of art, of course, but as regards our subject here, its another magnificent example of our desire to adorn ourselves being a vehicle to raise us out of our normative humanity, into a space that is evanescent and sublime.  I can honestly say that I think we would be a stronger, more cohesive world culture if we embraced this aspect of ourselves and gave it leave to speak without constraint.  Looking at this man, he is so at one with how he is dressed that we understand that all of what we are seeing is true to him.  Would that we could all do the same with equal strength. 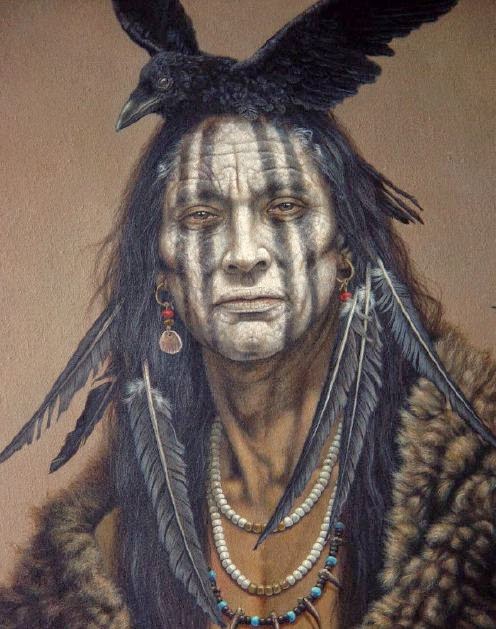 Wannamaker's Department Store was one of the early great success stories in the retail clothing world.  What's important to remember while looking at this detail image is that this was a ready to wear garment, not couture.  There was a time where such attention to detail, and quality of workmanship was far more commonplace than it is now.  What is this?  Its a ladies dressing gown.  madame would've worn this in the morning, possibly over her night clothes while at breakfast with the family, and certainly while preparing to dress for the morning routine. 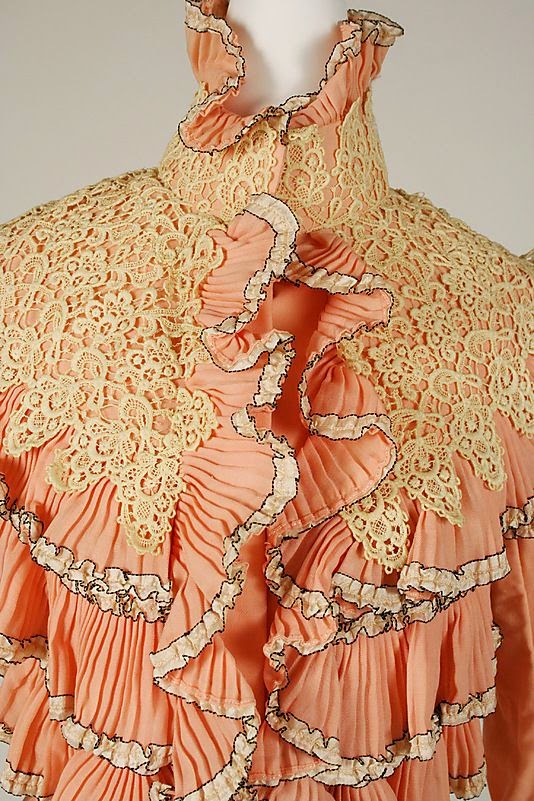 Fringe, we are being told, is a THING for the next season.  When I saw this, apart from laughing out loud as my first response, I decided to put myself to the test and see what I could glean from this besides amusement.  Certainly, as a garment for anyone this is an absurdity.  But as a meditation on the ability of strong texture and line to create an emotional sense its a good example.  The repeating, overlapping verticals seem like feathers to me, and with the way the fringe falls, coupled with the model's pose, it does get an avian quality to it.  Am I opposed to fringe as a garment detail?  Hardly.  Is it likely that we're all going to get mightily bored with it in no time as it shows up on everything? Yep.  Details and techniques of this sort should be used only occasionally for impact, unless its a cultural norm. 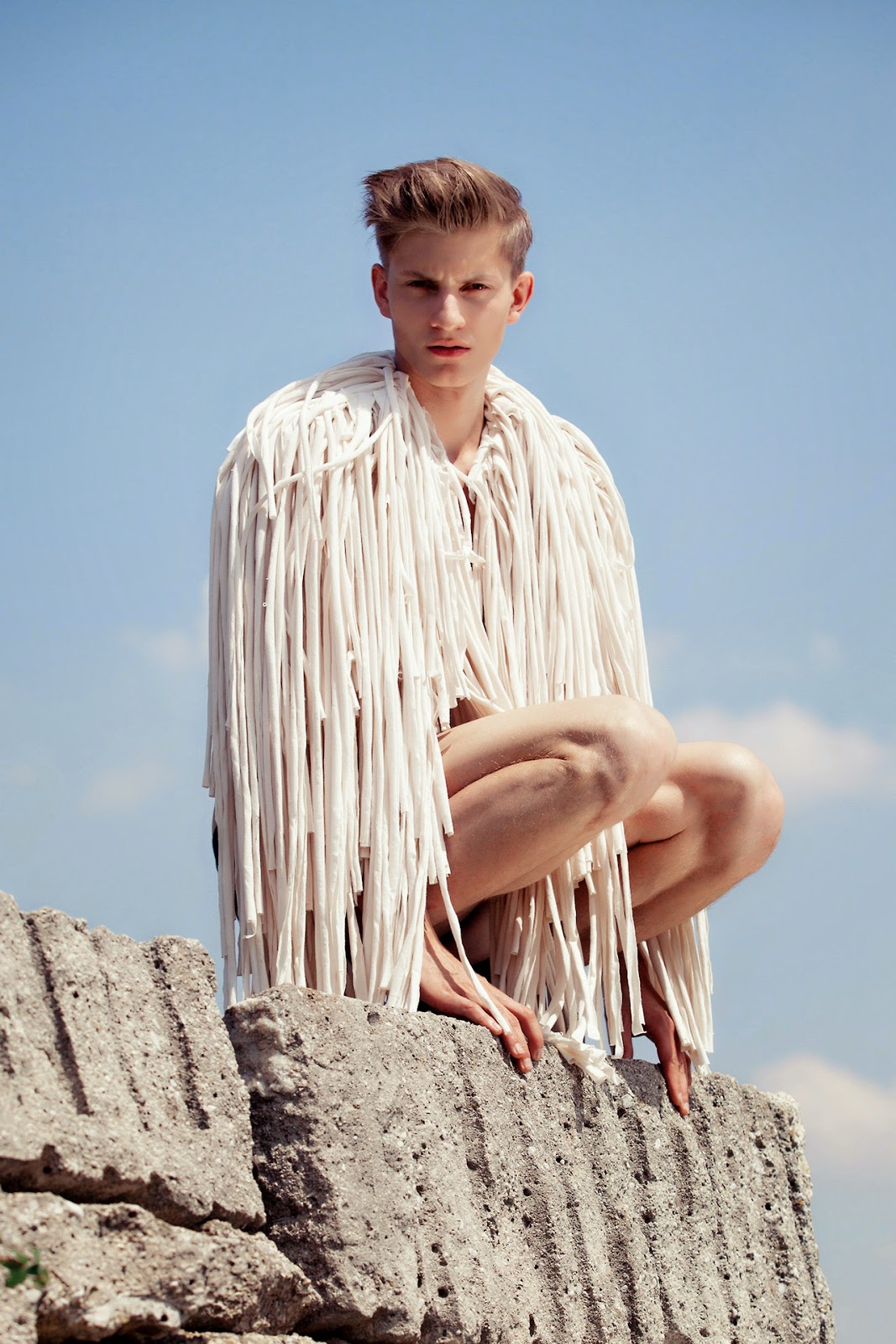 In 1961 L'Officiel printed this image.  What I love about this as part of the Attire conversation is that this evening dress is a great example of how the Couture was trying to cope with the Youthquake of the 60s, while attempting to still dress their more grown up clientele.  This dress, with its extreme severity is trying to bridge that gap.  The model's hair and make up are also leaning in the more youthful direction.  But like most attempts to stay in step while the parade is passing at a greater speed, this doesn't exactly succeed in keeping up.  There is a staid edge to it that divorces it from teh up an coming looks of the 60s. 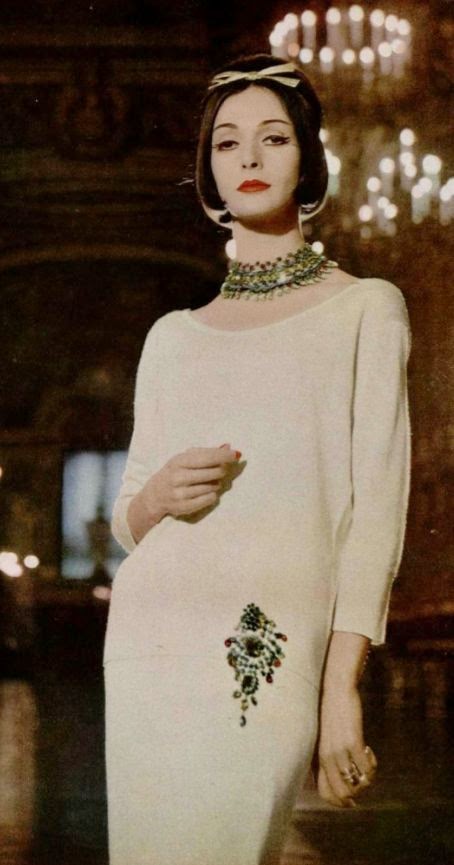 Virginia Elisabetta Luisa Carlotta Antonietta Teresa Maria Oldoini was most often known as the Contesse de Castiglione. She was a mistress of Emperor Napoleon III and was originally form the Tuscany region of Italy.  This extraordinary image was taken of her around 1864 by Pierre Louis Pierson.  Not only is it unusual in its pose, but the relaxed and opened sensual manner of her gaze is amazing for the time.  She was a remarkable lady known for her wildly extravagant dress and her willingness to be just a bit outrageous.  I love this photograph. 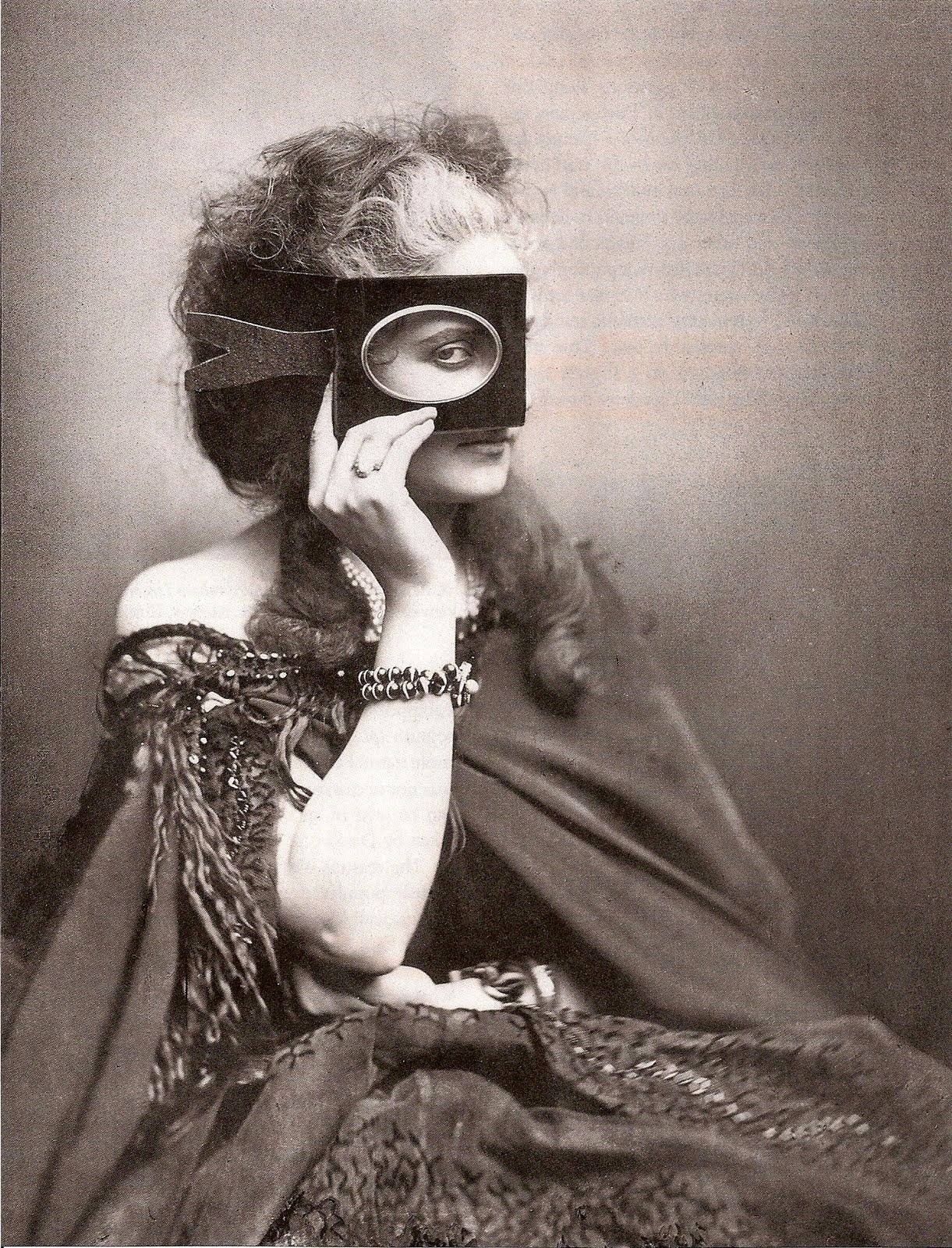 Georges Barbier was one of the premier illustrators of fashion at the beginning of the 20th century, when suddenly, like the couturiers for whom they worked, artists like Barbier were becoming famous in their own right, where previously illustrations were not often given artist attribution at all.  This illustration is of a Lanvin creation from 1922.  It shows the growing stylization of fashion imagery. Its a huge departure from the relentless accuracy of delineating every last fold and ruffle. Also, the woman is shown in a less structured pose; as though caught between moments of movement. Its a glimpse at how much everything was changing. 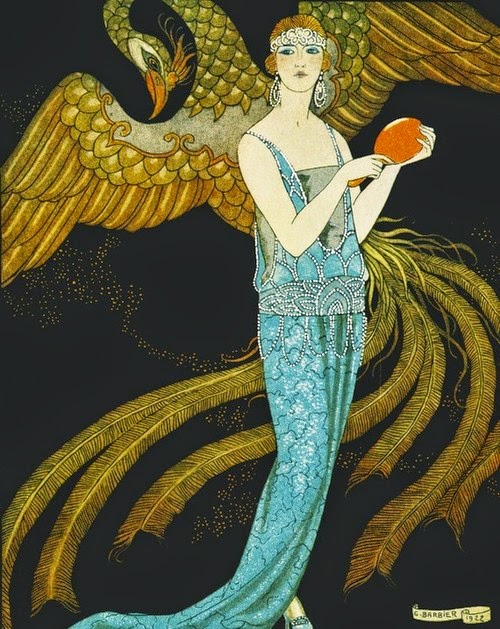 And well, yeah, back to Mr Worth we go.  What more fitting close to this week's scatter. 1885 is the date for this elegant dress. Its officially an afternoon dress, but its composition and decorations would have made this a regular go to frock for the lady who owned it. Its styling would enable it to be suitable for town outings during the day, visiting, entertaining daily callers, and for casual dinners at home.  Its a classic example of the well edited Worth style.  Two textiles do most of the work.  A deep garnet colored silk and an even darker silk velvet. The dress slyly refers to the men's suits of the 18th century with its cutaway jacket, edged with embroidery.  But one of the things I like most is the superbly handled draping of the bustled back. The gentle asymmetry of the velvet and silk looks almost like a gigantic, loosely tied bow.  Its a gorgeous color and whoever she was, she must have loved wearing it. 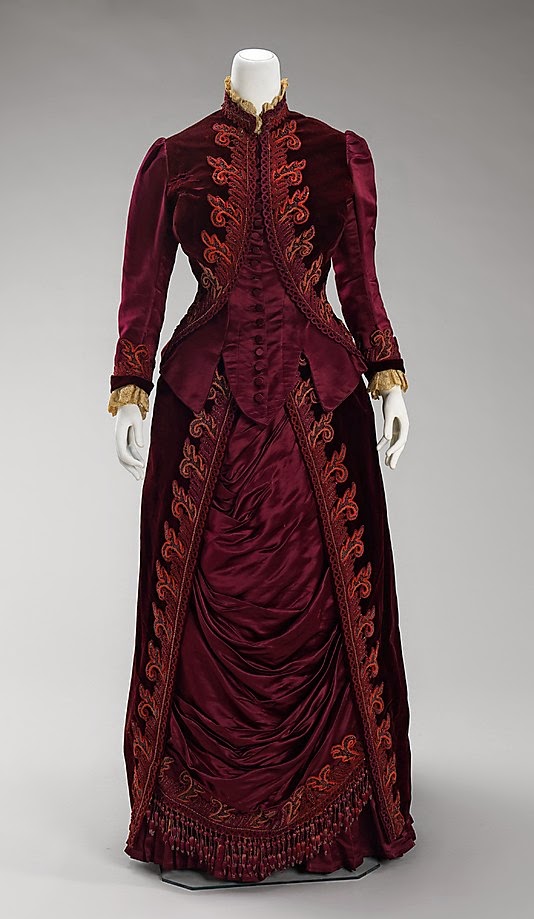 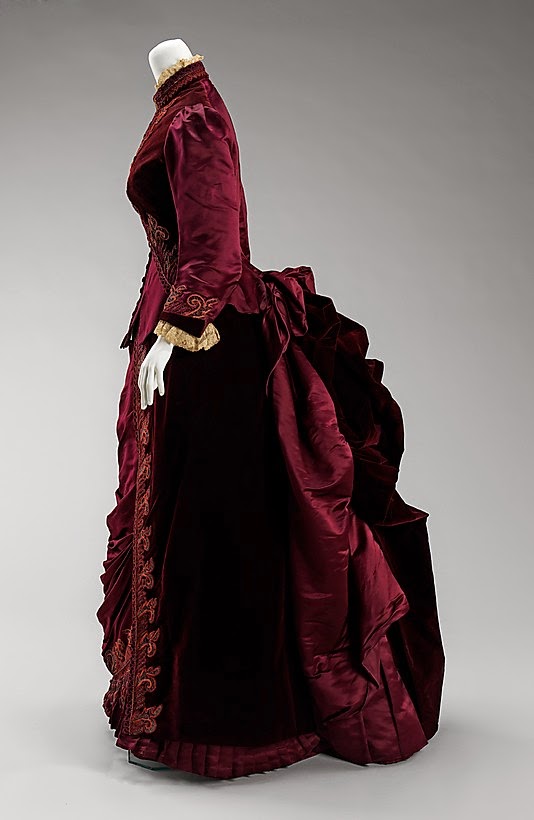 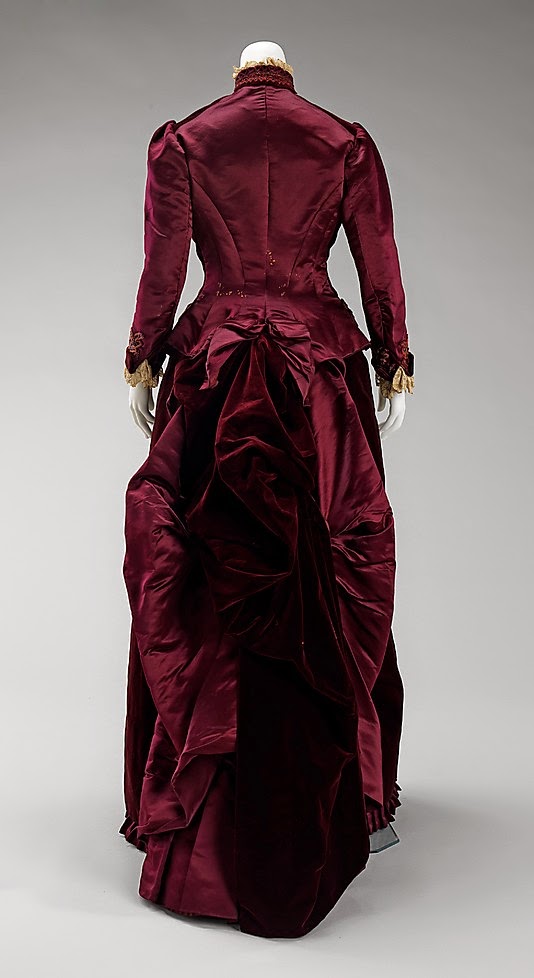 Well, my 25th foray into Scattertown is over. Have a Grand Weekend, all!
Posted by Paul G. Ellis at 4:16 AM