Ahhhhhh, Saturday!  And we all know what that means.  Time again for a stroll through my far too crowded noggin.

This marvelous and perfectly executed work is part of a historical recreation done by Olivier Henry in 2005, and recently used as part of an exhibition of historical clothing in France.  The beadwork and embroidery are simply perfect in every detail, and the subtle balance of colors is both soothing and exciting at once.  Bravo, Monsieur! 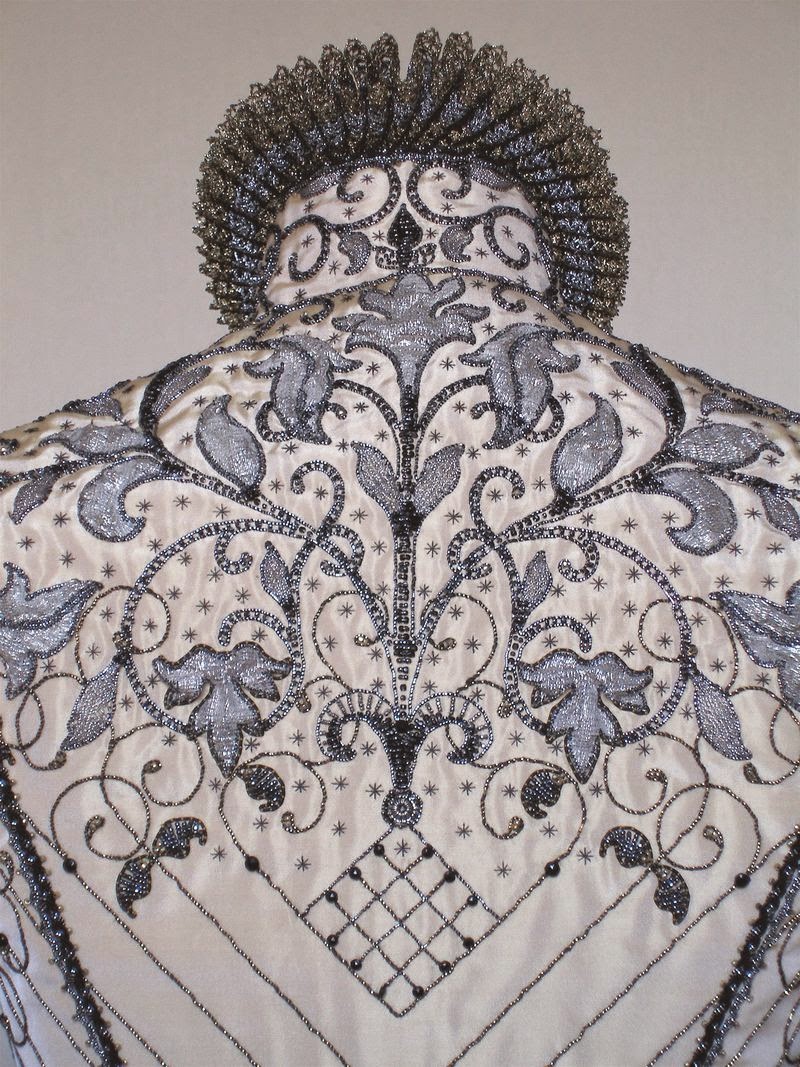 I have written and spoken before about how we started on this long path towards the frightfully complex language we now have to hand. Here is an ideal example of what may be the very earliest kind of human adornment.  Taking the very substance of the land and painting it onto our skin in patterns seems a very logical place for all this to have begun, and its still a powerful method of conveying our needed messages.  What does this pattern say to you, as a modern world person? 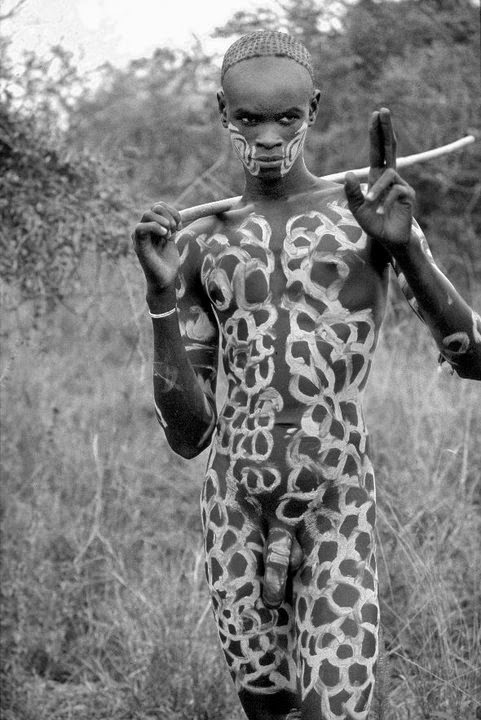 A bit of frightfully dazzling bling next.  This breathtaking brooch is the product of Tiffany & Co. its a 75.47 carat square cut emerald called the Hooker emerald, mounted in platinum, with 108 round cut diamonds.  The raw emerald was first mined in Colombia in the 16th or 17th century. It passed from the Spanish to the ottoman empire then to Paris, where it was eventually bought at auction by Tiffany & Co.  First set by Tiffany in a tiara, it sat, unsold, till it was re-set in the 1950s as a brooch and subsequently purchased by Janet Annenburg Hooker, who eventually gifted it to the Smithsonian. 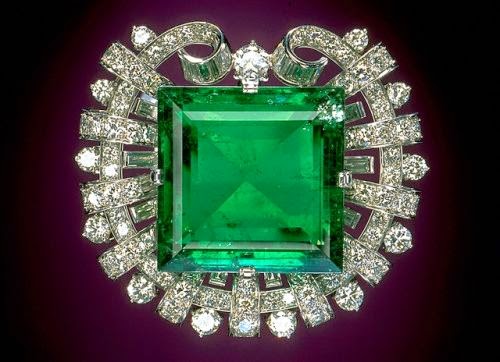 This next is guaranteed to make y'all go WTF?  The work for design company Skingraft is always on the edge, seriously challenging, and often more than a bit disturbing.  This menswear ensemble from their S/S 2015 collection is no less of any of that.  The quilted coat, with its lightened center, makes me think of someone being dissected.  And the fact that its shiny as well only heightens that literally visceral quality in my eyes.  Sometimes, even for me, finding the things within avant garde looks that communicate well is tough. 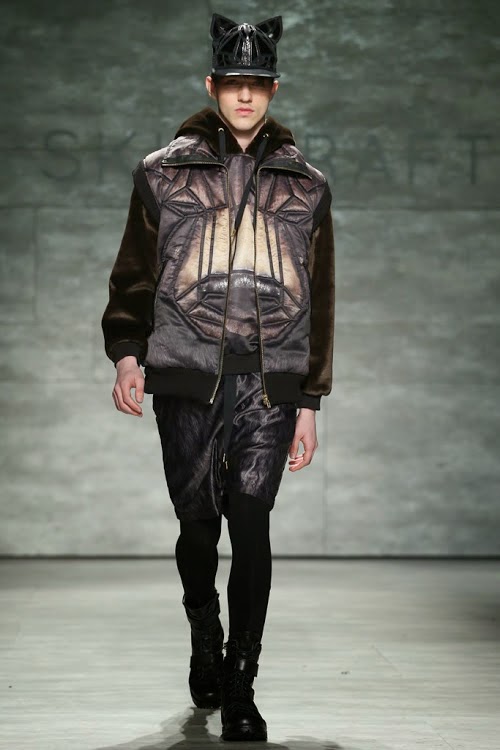 The 1920s was the first decade where pants for women gained enough credibility to leave the realm of the edgy and make the leap into the mainstream  of the Attire dialog.  This at home pajama of lace and lame' is perhaps a rather silly example to our 21st century eyes.  But it was full on fashionable at the time.  And recalls to me as well, a post I did encouraging us all to take better care of our inner selves by dressing up when we relax.  Honor yourself at home, in private. Wear something fabulous. 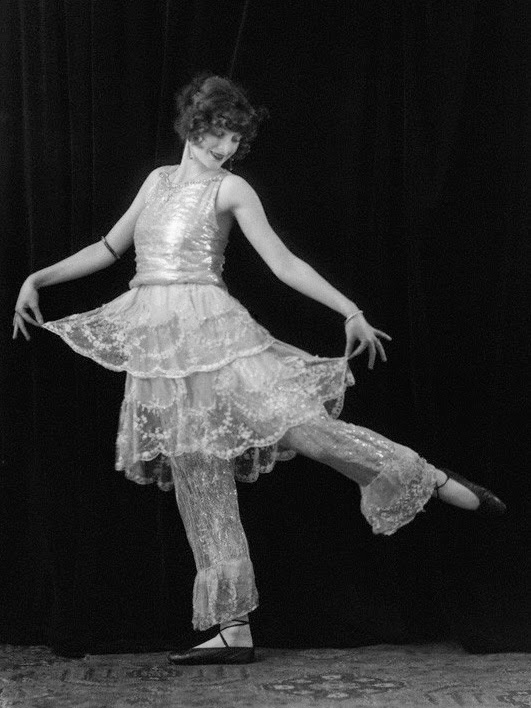 With many thanks to the Leather Archive and Museum, this really rather silly advert for leather pants from the 1970s.  We start out with that classic, yet absurd men's clothing ad pose, the one no man on earth would every do naturally. And then the rather jarring dissonance between the snakeskin boots and leather pants, and the beige sweater vest and necktie above the waist.  I don't remember ever seeing anyone togged out like this. Do you? 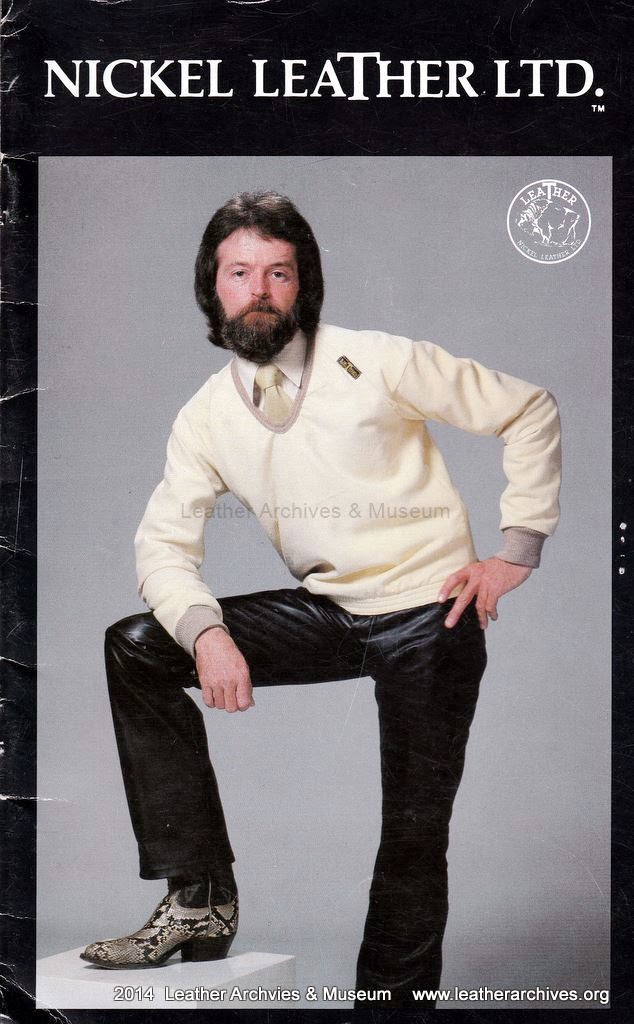 More great human artistry. This is a Venetian carnivale mask.  Our innate need to transmogrify ourselves into people than things outside of the normal has roots as far back as our walking upright.  This fantastical mask allows its wearer to take on, literally, the aspect of some kind of imagined animal.  Dressing up in this way releases something primal in us. It gives us a chance to voice things we normally suppress.  What would you reveal, with this on? 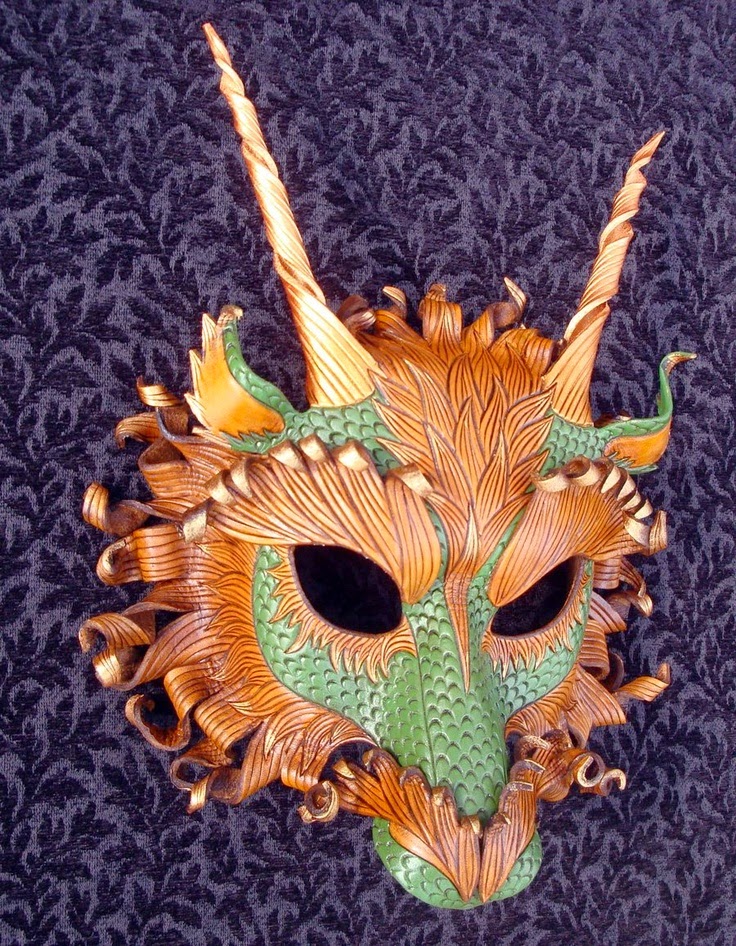 With a very few exceptions for over a century lace has been the exclusive province of women. To my mind the motivator behind that was the changes wrought by the Industrial Revolution.  Men were required to present a far more serious face to the world, and lace was entirely to fragile a thing to be part of that newly grim visage.  As we move more into the 21st, our notions of male and female, and of gender appropriateness in apparel are getting more consistently challenged.  This ensemble by Jean Paul Gaultier is just such a challenge.  Rendered as a tee shirt, the lace becomes a new expression: and paired with leather opera gloves, that statement gains considerable, though in some ways difficult to accept, power. 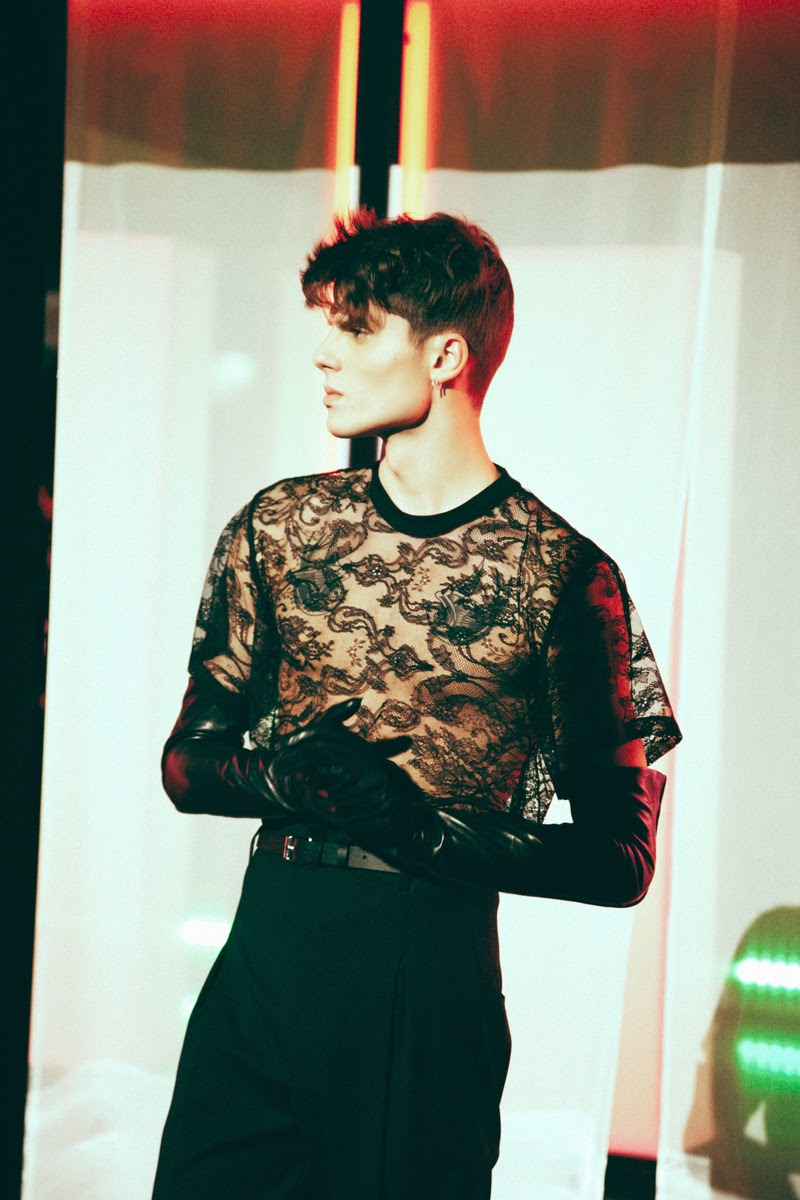 This fashion illustration from 1799 shows one of the truly strange transitional silhouettes to ever unfortunately grace women's bodies.  The 18th century was known for the vast proportions of the skirts, and at the end of the century, in an effort to retain some separation from common dress, while giving a nod to the new mode, this ill-considered thing appeared.  What happened was this: the waistline was rapidly rising to just under the bust. with the concomitant flattening of the skirts into a soft tube.  The court dress allowed the waistline to rise, but kept the huge skirts anyway, establishing a look that made women resemble a tea cozy with arms.  This fashion was mercifully short lived. 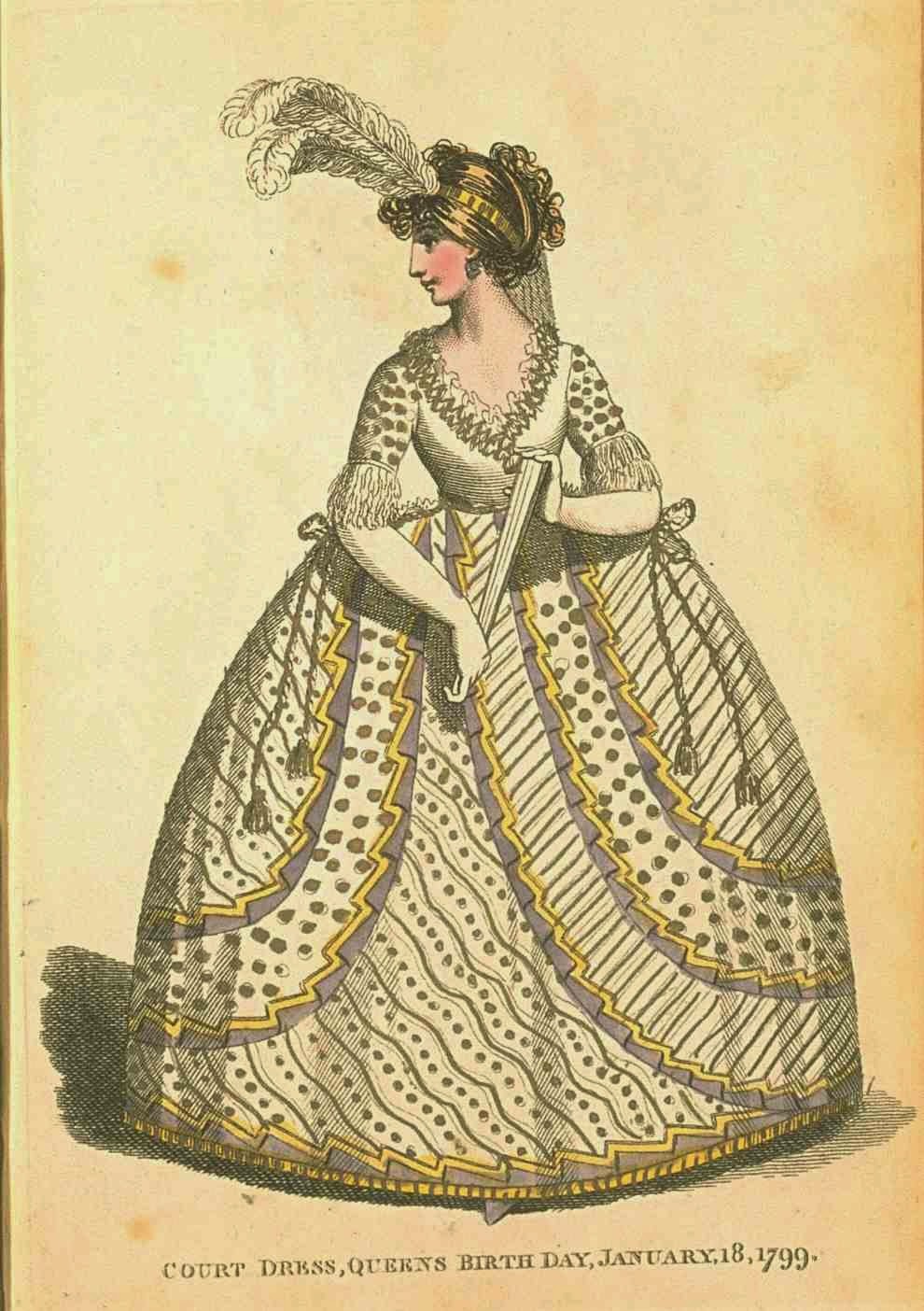 To close out today, this fab looking fella.  Give your inner dandy room to play. Find ways to bring it out to the world.  This marvelous fellow is working his dandy wonderfully.  And doesn't he know it? 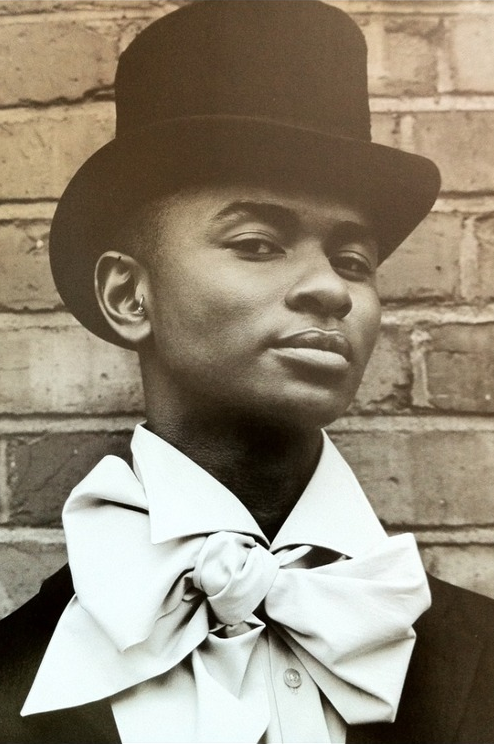 Have a wonderful weekend my friends!