When I was a kid, like most kids I didn't believe a word I heard about how fast time would seem to move as I got older.  I hate it when they're right.  It DOES!  So here's the next edition of Scatter for your delectation and enjoyment.
Our first entry today is this detail shot from a late 19th century dress.  The word frothy jumped into my head on seeing this image. Certainly this is far too fussy for our current tastes, but in its time it was high fashion, and expertly handled.  I love the interaction between the texture of the silk chiffon and the satin, the density of the appliques and the lightness of the bow tie.  Its all a delightful looking combination, rendered in subtle colors that keep it from overwhelming the eye.  Marvelous. 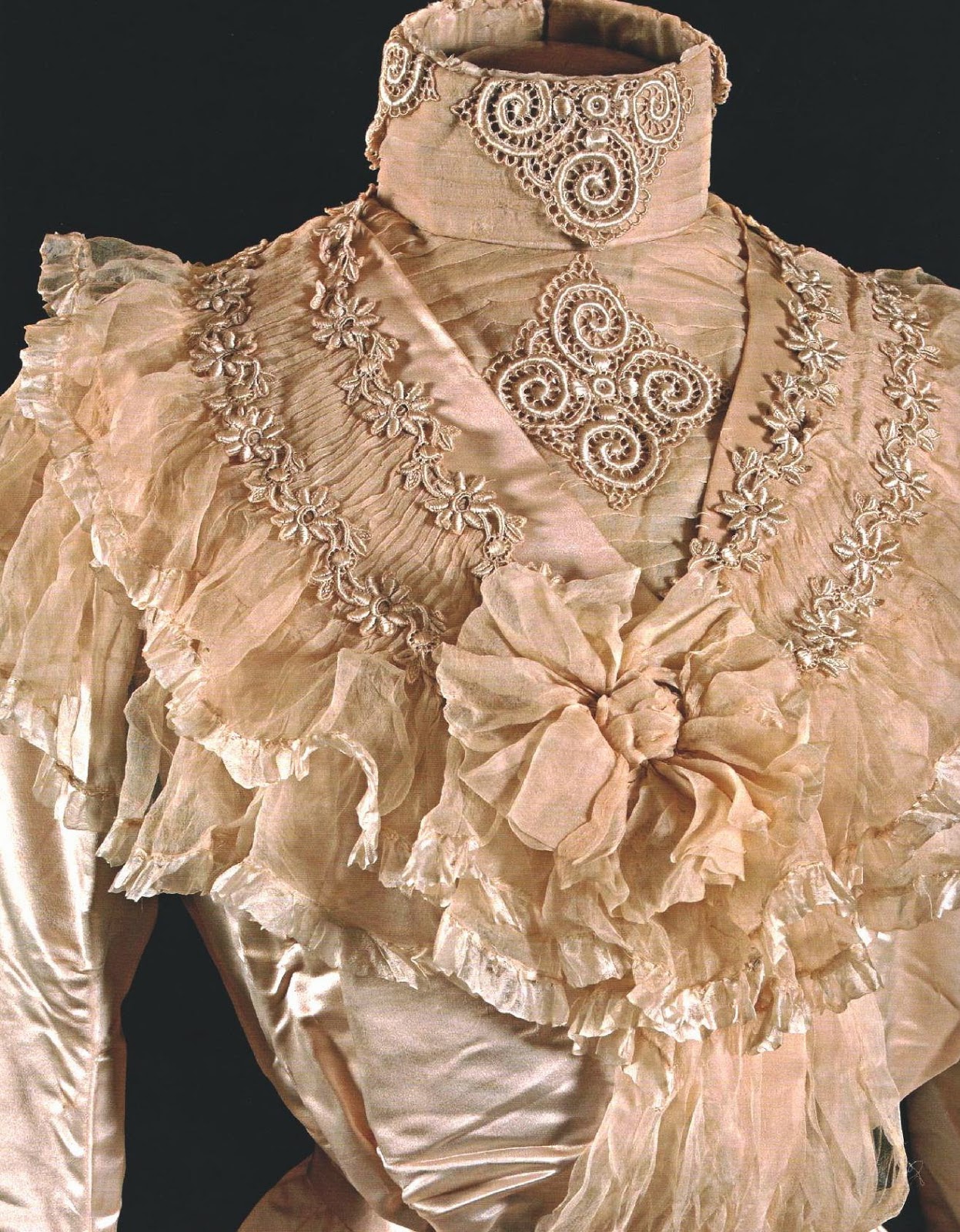 Fake fur can be handled so that its nearly impossible to tell on casual view that it isn't the real deal.  In this case its been worked in a way that makes it quite obvious that its fake.  I don't know if that was the intention of the designer, but how its been treated in assembly diminishes the impact of the finished piece to me.  What does the coat no favors is rolling the fur around the outer edge of the collar and the coat opening.  It only makes its false nature more apparent.  What do you think? 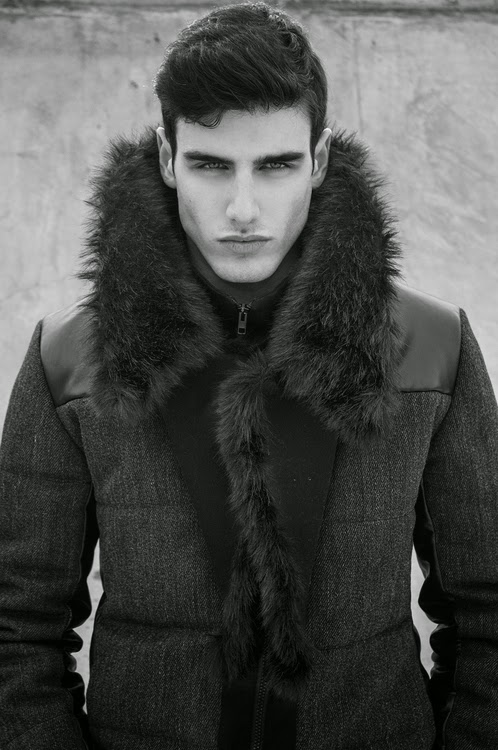 This is a 2014 effort by Indian designer Manish Arora.  I love the update on the classic Indian silhouette and the embellishment work is sheer dazzle from top to bottom. It feeds my inner magpie quite nicely, thank you. 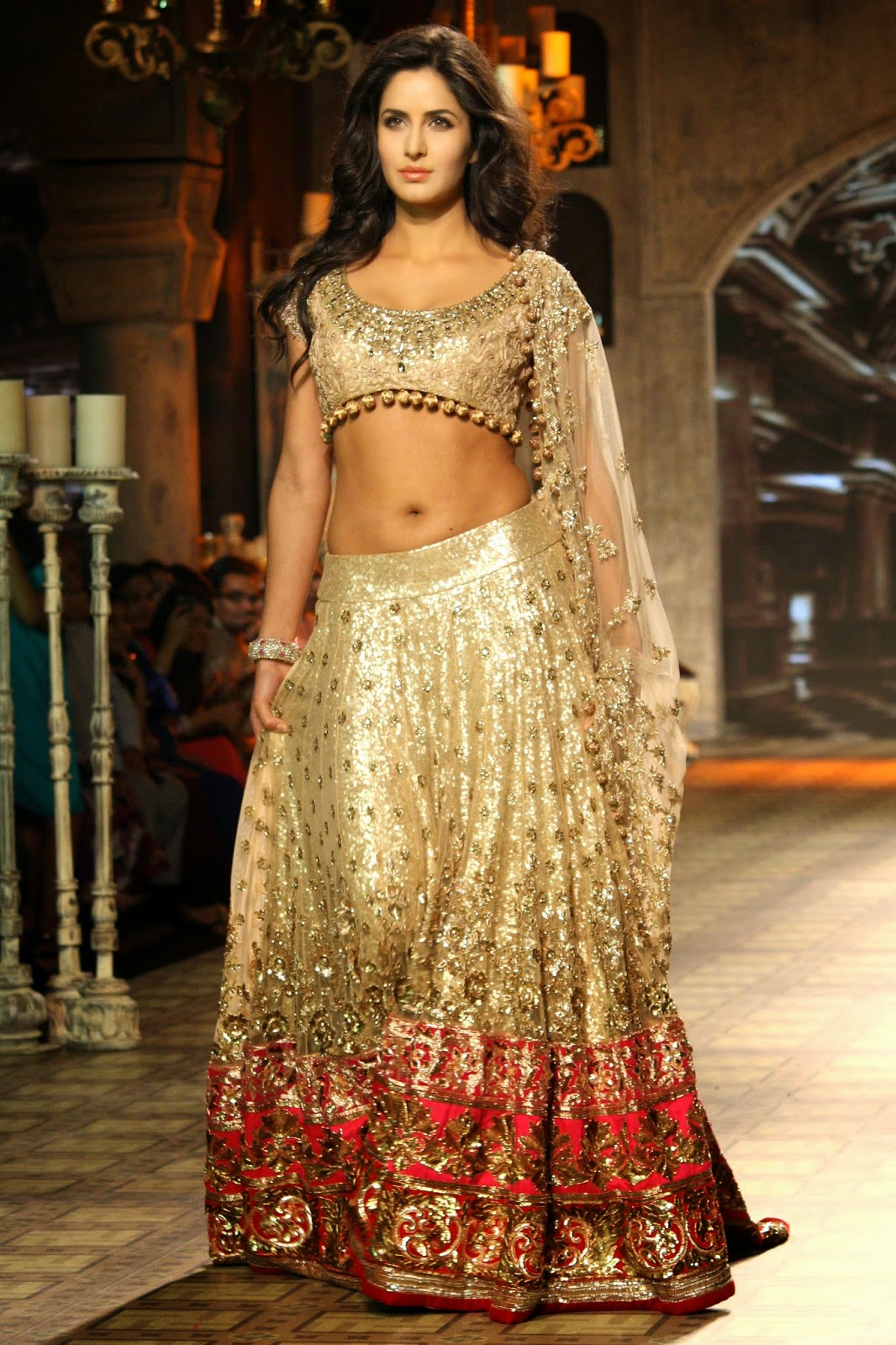 This pendant is by Rene' Lalique.  Its fashioned in gold with a carved glass back panel. The snow laden tree is done in enamel and the light blue stones are sapphires.  Hanging from the bottom is a teardrop shaped natural gray pearl. Its a magnificent expression of the Art Nouveau aesthetic, flawlessly worked. 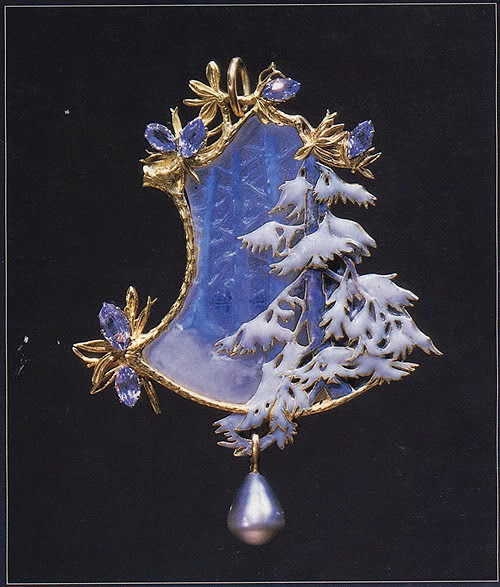 This is something interesting.  This tanktop with its velour strapping is actually a kind of shapewear for men.  Its designed to minimize the waist line and hips while allowing the upper body to be on display.  As a concept it sounds fine. I can't say I'm on board fully with the finished design.  The choice of materials is oddly heavy looking for something that is supposed to be rather body conscious.  Part of it is that the straps aren't fully sewn down across the body, adding to apparent bulk, so it rather defeats its intended purpose.The pants?  Well, its sure a good way to get everyone to look at your crotch.  If that's your intent, then go for it. 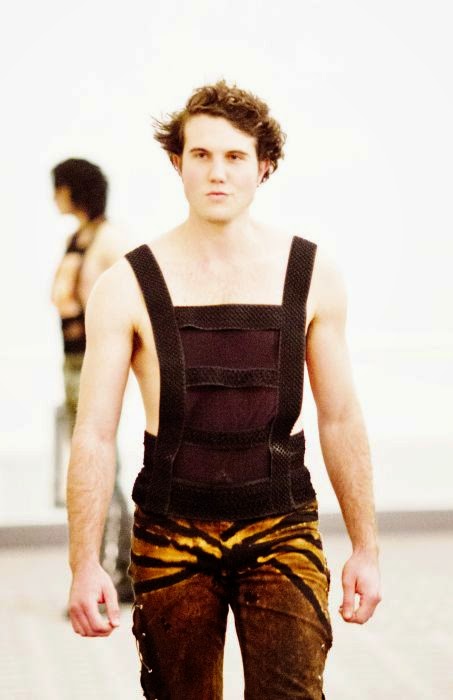 This solid gold pectoral plaque is from Persia, and was done between the 6th and 4th centuries BC.  The two horned Griffins are rendered with wonderful energy and the whole composition is really terrific.  I love the ferocity of their expressions and the way their tails have become round shield-like elements in the design.  Human inventiveness and artistry is nothing new, for sure. 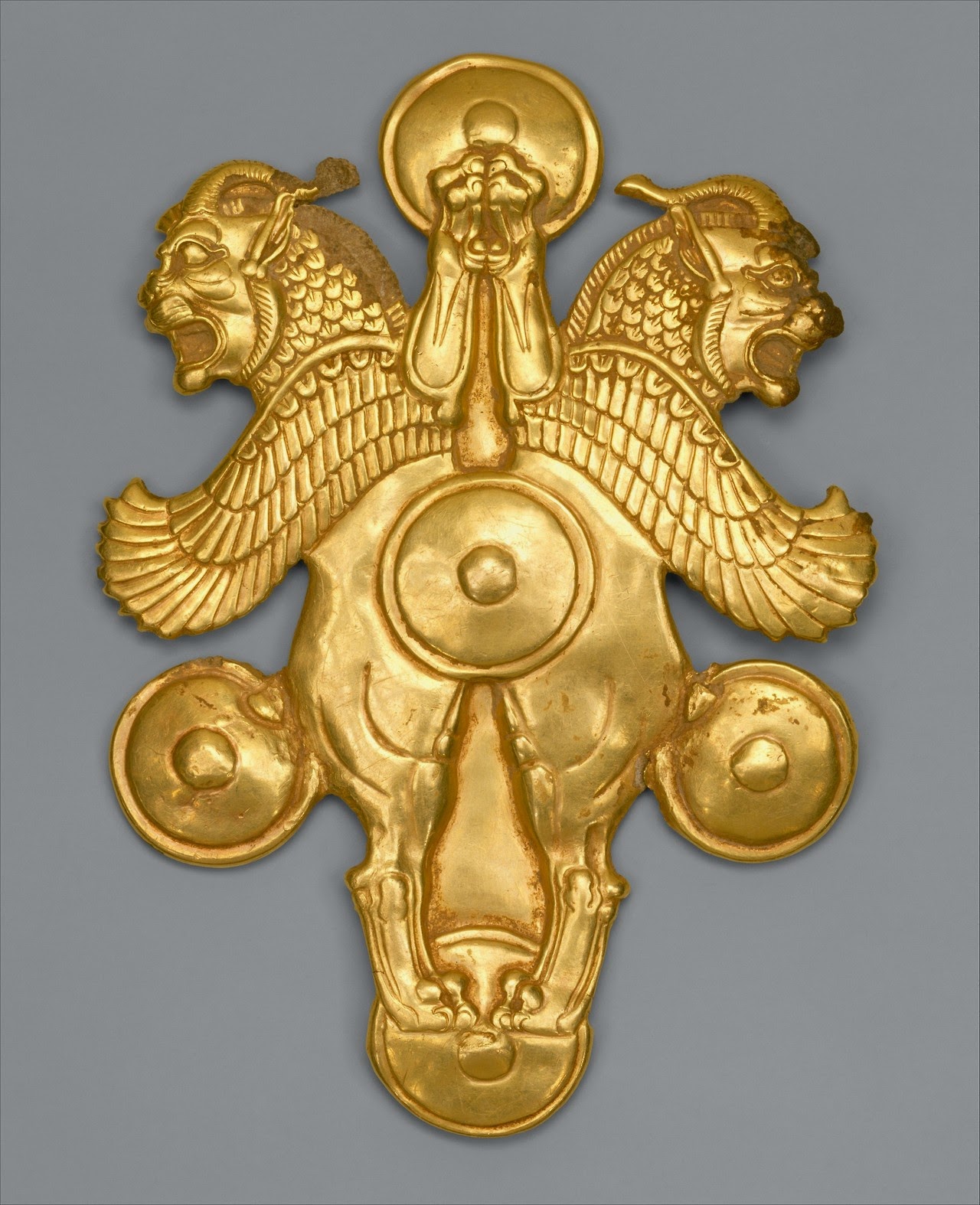 Votage was the name of Iris Van Herpen's most recent collection, which drew on the connection between electricity and the Human body. Utterly unwearable in any real world sense, this piece is a wonderful bit of sculpture that uses the human body as structural armature.  And yeah, its 3D printed, in metal. 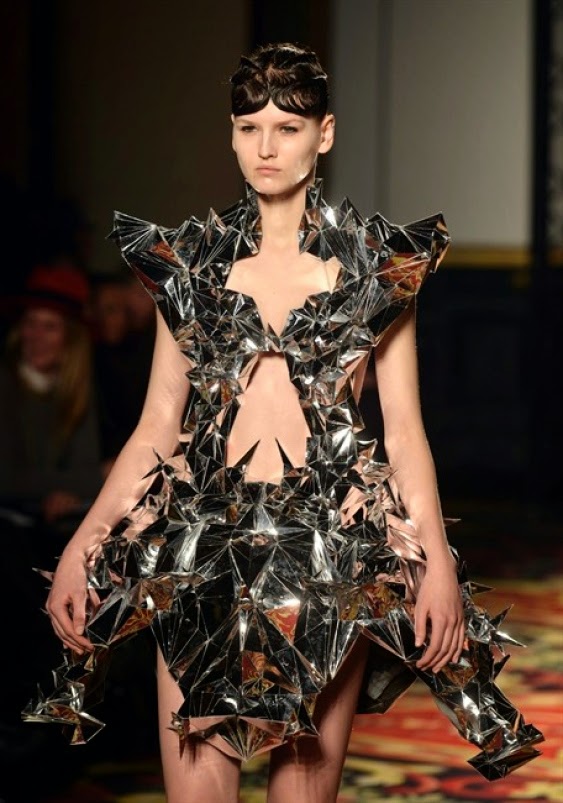 Jean Paul Gaultier is one of those designers I'd love to have over to dinner. I bet he's a blast to hang out with.  Its long been part of his process to present both men's and women's clothes together in his Couture shows. And his work is always a challenge to get around.  Its cheeky, bold, sexy, and often a bit dark, but always interesting to see.  For me, I'll take the whole left hand outfit, and the coat on the right.  What about you? 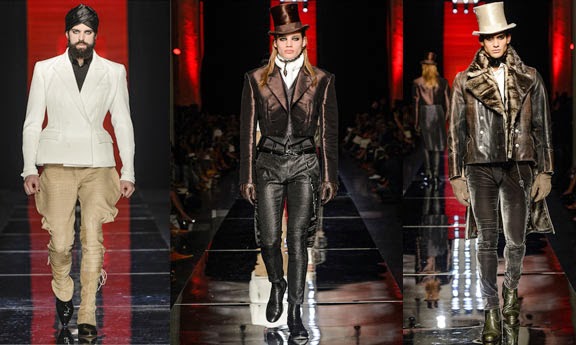 Earlier in the week I did a post about cultural appropriation.  This dress, which lives in the V&A's permanent collection is by Leonard Joseph, from 1968, and it couldn't exist without the bold references to classical Egypt.  It merges the space age ideals of the 60s with the shape of Egyptian dress into something entirely new looking. 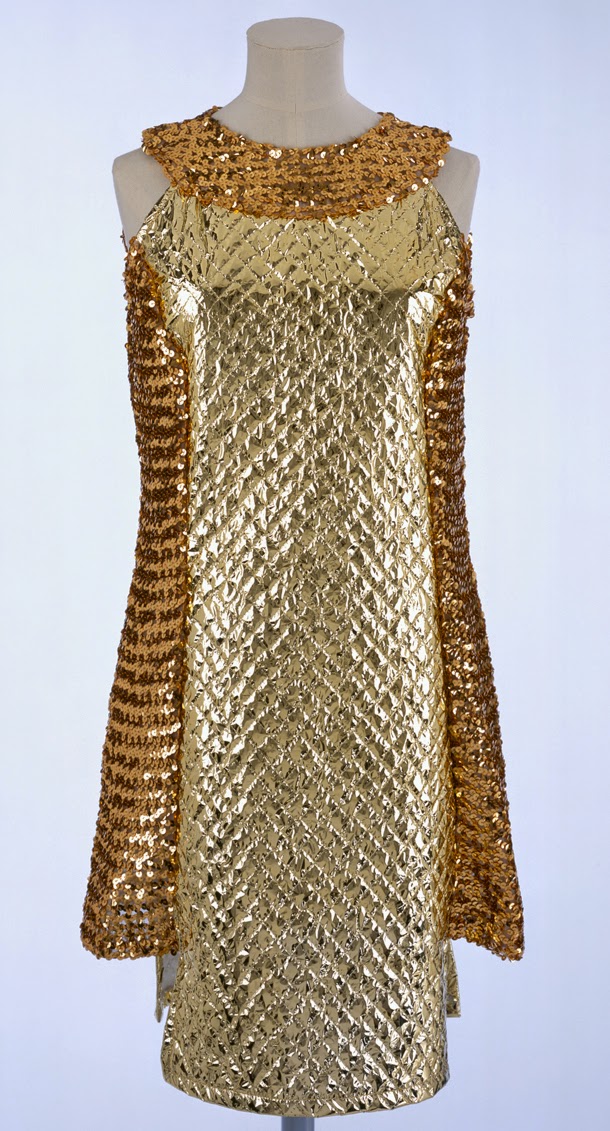 And for our final entry these two examples of jewelry from Uzbekistan. First is a pair of gold and enamel amulets with turquoise and carnelian.  The other is a gold necklace with small turquoise stones inset.  What's intriguing to me here, is that in just these two pieces an observer can already begin to assemble a picture of the overall artistic mindset of the people. That they are all beautiful, and wonderfully made is apparent. What makes them more interesting still is the window into a people that they provide. 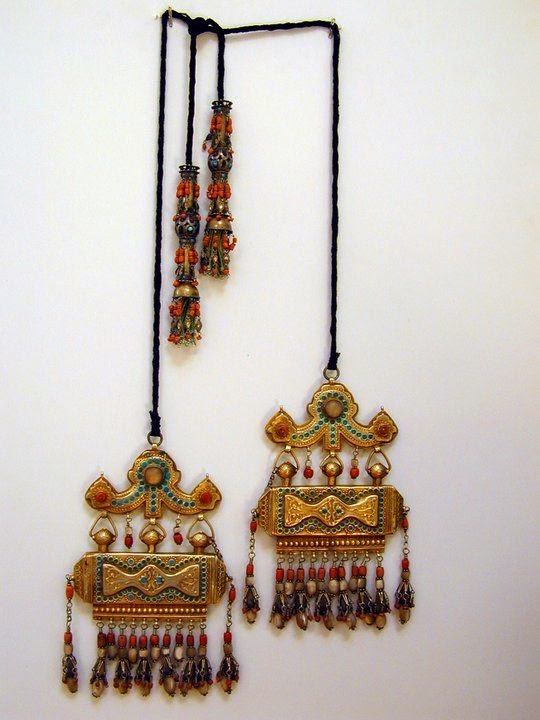 Have a splendid weekend, All!
Posted by Paul G. Ellis at 3:34 AM