Its been the requisite seven days, so its time to delve into my storehouse of stuff and nonsense.

The first thing to show you is this marvelously detailed and beautifully constructed recreation of a court gown from 1750. It was created by the obviously talented hands of Olivier Henry in 2011 and was recently used in a French museum exhibition of period garments and how they are constructed.  The entire bodice is worked with metallic appliques and bullion work, and the cool gray tone of the grandly scaled skirt fabric makes a great counterpoint.  I love this. 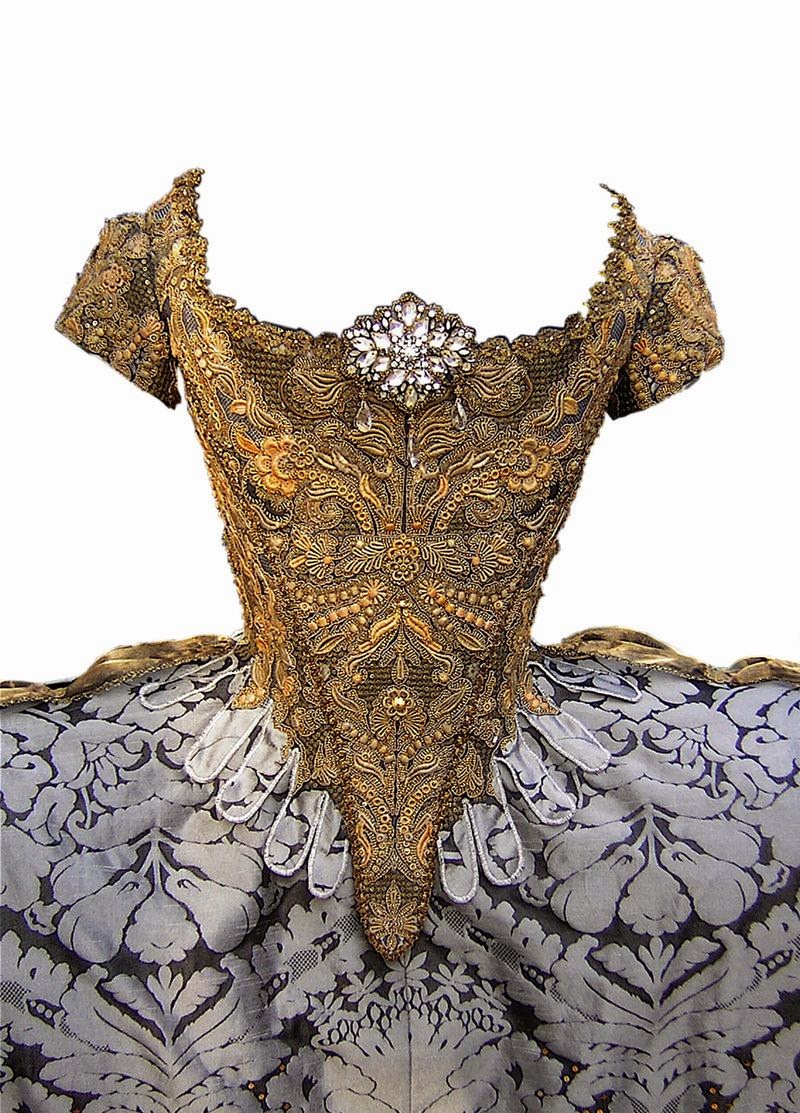 Balmain menswear collection, F/W 2014.  I was taken by this interesting variation on a biker jacket. The over scaled leopard print takes it somewhere new, and creates from a known Attire word, a new one.  In fact it amps up the subtext of danger to a new level.  I admit I'm rarely gone for animal prints, but this really works for me. 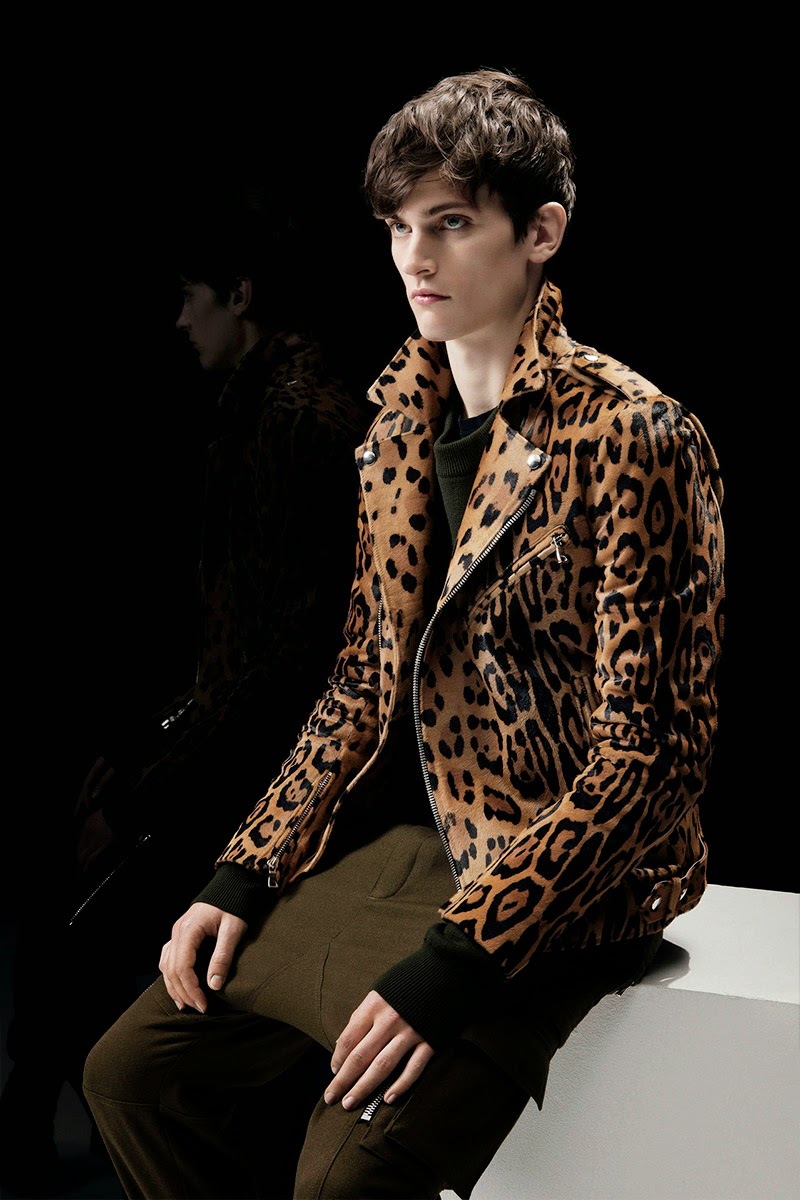 In the 1860s, it didn't matter if it was 98 degrees, a lady still wore the hoops and petticoats and a long dress.  All that was different was what those things were made up with.  The petticoats would be lighter and the dress, as with this charming example could be as light as a cloud.  This dress is made of three textiles, the dominant one is a cotton gauze with a tiny print. The second is a blue cross hatched cotton and the third is a ribbon floral cotton.  This is the sort of thing a lady of fashion would have worn to a dinner or to a summer dance.  Its full on delightful looking.  She must have still been dying of heat prostration by evenings end. 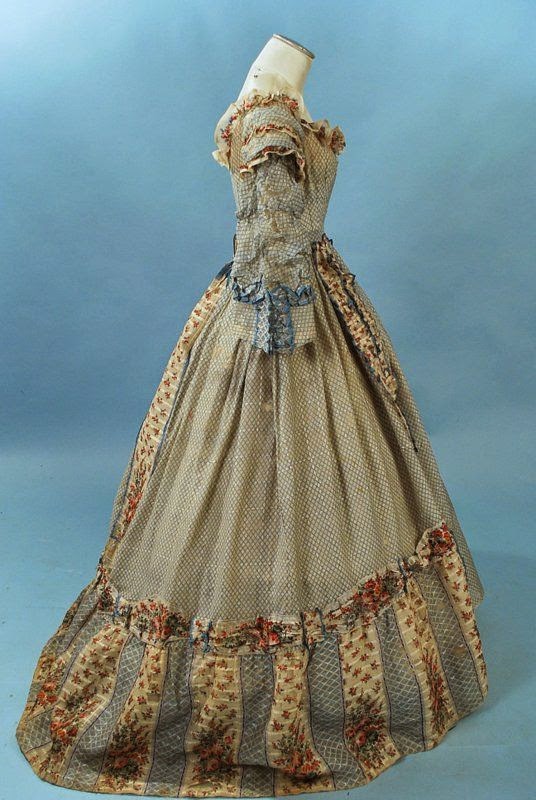 Richard Burton and Elizabeth Taylor did a turn in 1967 in The Taming of the Shrew.  The Franco Zeffirelli film was notable for the lavishness of the costume work, and these costumes in especial are worthy of note.  Taylor has been costumed to maximize her beauty, and also to imply the compliant stance she will later adopt in the text of the play. Burton is tricked out pretty much precisely as Shakespeare described Petruchio in the wedding scene.  Its too long to quote here, but trust me that every particular of this outlandish outfit is set forth by Shakespeare.  And if you've never seen the film, its one of the few times the full physicality of the characters contesting relationship is given free rein. 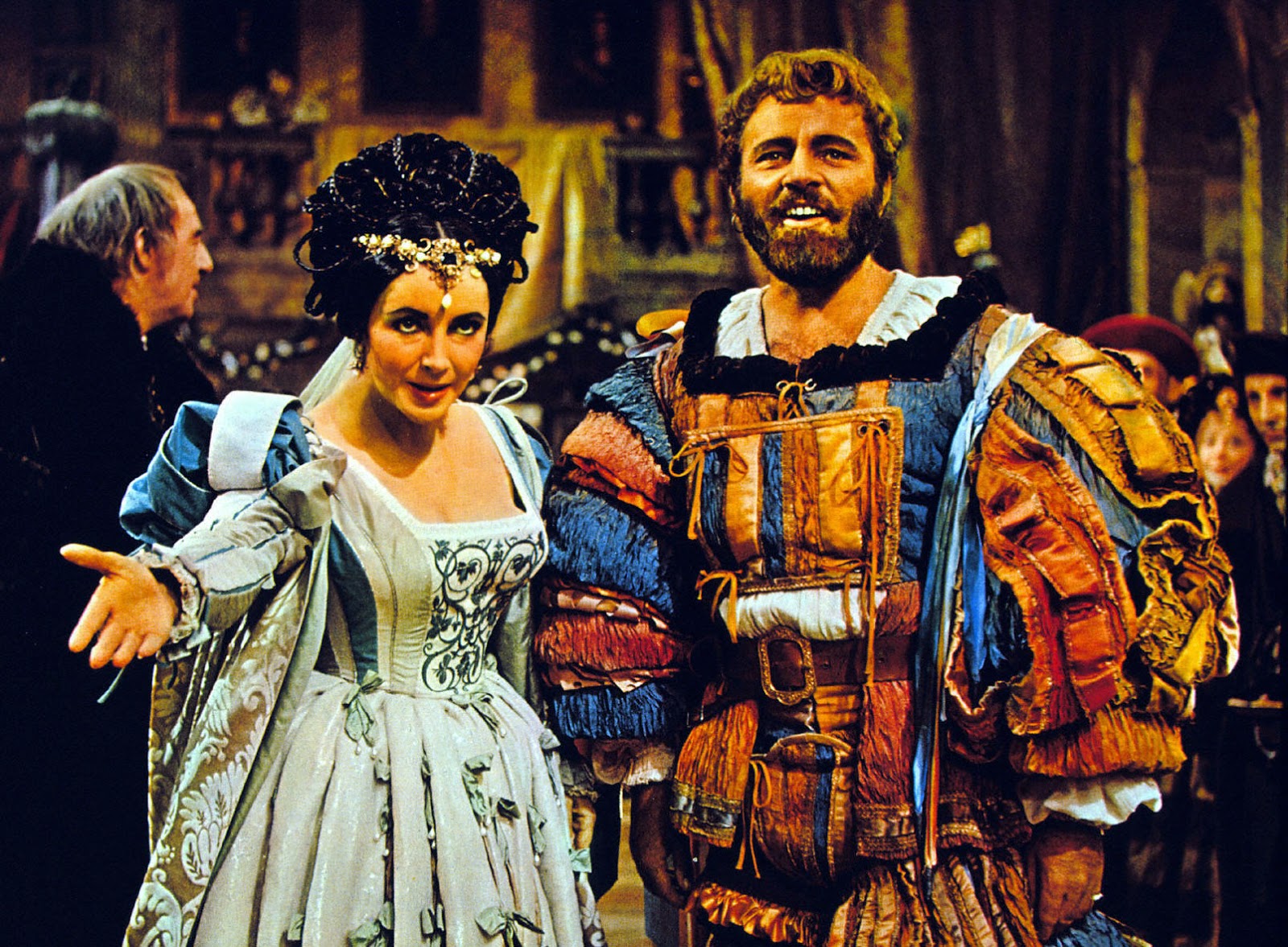 One of the most unique collections in Yves St Laurent's career was his famous African inspired collection.  I had the great good fortune to see many of the dresses from this collection up close when the De Young mounted a YSL retrospective some years back.  The key element that brought all of it together was the amazing embroidery work done by Lesage.  Every piece was an amazing almalgam of wood, glass and stone beads, often, as in this outfit, creating a beadwork mesh over tunic.  Its still dazzling stuff. 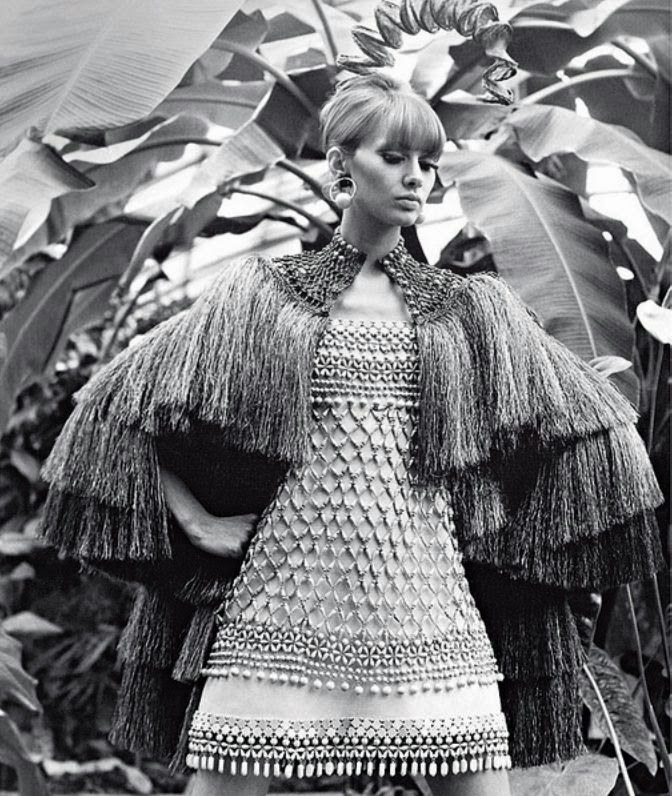 There is something I find poetic and appealing about this look. Perhaps its the counterbalance between the big wide legged pleated trousers and the black chiffon shirt with the flower details.  I'm not entirely sure, but I find this look interesting, and I think about its relevance in the Attire vocabulary. I think this could play a role. 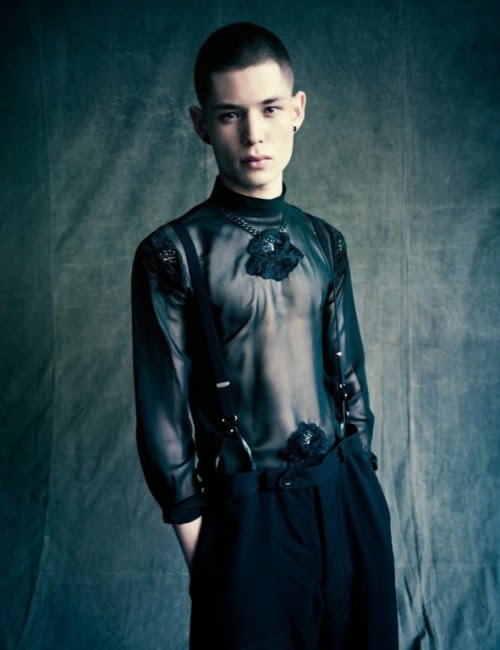 This promenade dress is by Emile Pingat and was made in 1888. It has a clear reference to the men's suits of the late 18th century, since the upper half of the dress is a direct steal from the men's court suits of the late 1700s.  The entire costume is in deep olive green silk velvet, with a loden green waistcoat and under ruffle.  Its a marvelously unified look that could have gone very wrong in less skilled hands.  The perfect balance has been struck between the ruffles of the skirt and the rigid structure of the coat and waistcoat.  Bravo, Mr Pingat! 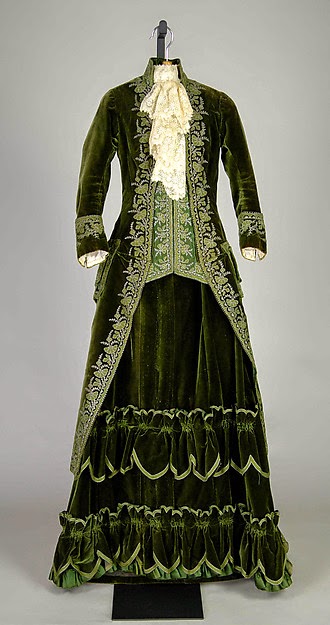 A headdress of this sort must weigh a good deal. This is a Tibetan piece, from the early 20th century. The entire surface is covered with semi-precious stones in simple tumbled form.  I just found it arresting looking and couldn't resist posting it. 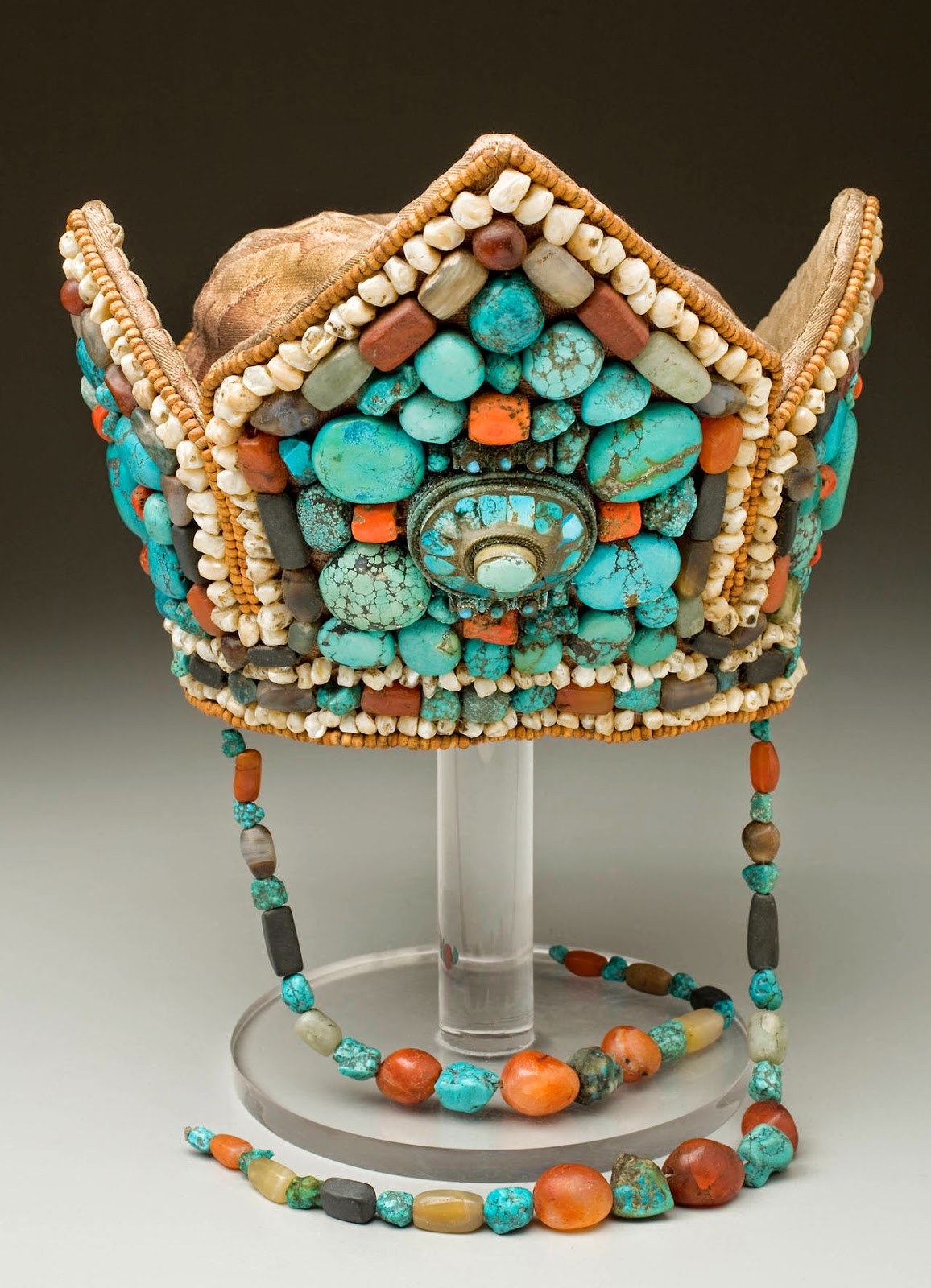 This is a Yupik Eskimo hunting visor from 1870.  Its a wonderful look at sympathetic magic and our desire to garner onto ourselves the qualities of the animals we stalk.  These bone pieces confer a power to the wearer, aiding in the hunting process, while also proclaiming to the viewer what a skilled and powerful hunter this person is.  And its also just plain beautiful. 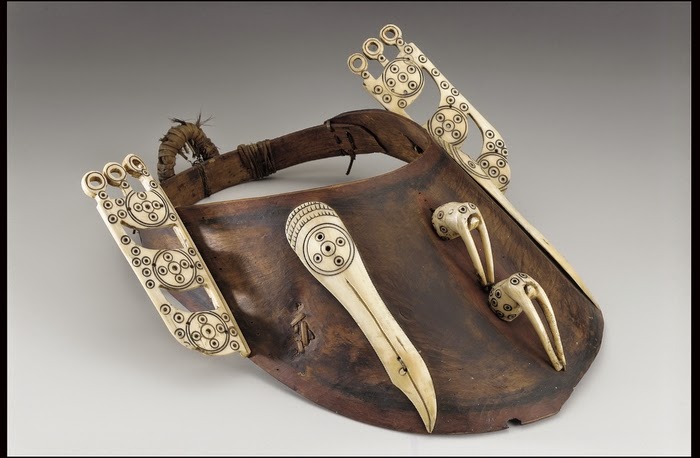 Final note today is a Comme De Garcons wedding dress from the 2012 Spring RTW collection.  Its unusual for Comme De Garcons in that its actually a believable piece, that styled differently I could actually see some bride wearing proudly.  Sure, it still pushes boundaries, but with a less insane bit of headgear, I think we'd be onto something. 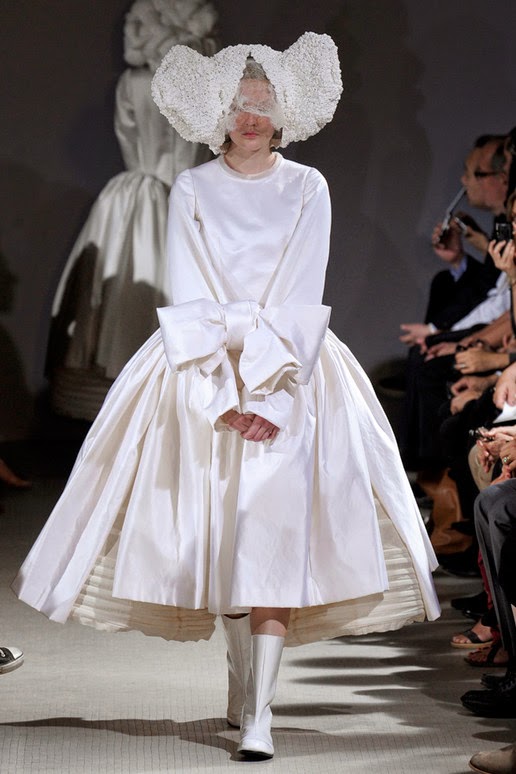