Film, television, and literature have again and again tried to predict what the future will hold for us all with regard to what we will wear.  They have inevitably failed every time.  But why?  Well, in my estimation its because there is no way to accurately predict enough of the social shifts that drive the Attire language to be able to get a clear picture.
That continual failure doesn't mean though that these attempts aren't worth review.  So herewith you'll find a number of images from various sources with my comments about the good and bad points of each.

This first image is from a series of drawing done in 1893 that predicted how fashions would look in the 20th century.  Though the clothes are absurdly costumey to our eyes, and largely unwearable to boot, the one thing that does resonate as accurate is the eclecticism of the outfits. 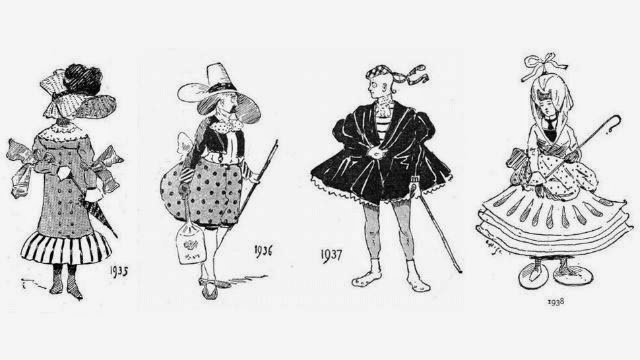 The next image is from a 1930s film of fashion predictions of the 21st century.  The transparency is dead on the money for current runway trend, but the hair and makeup are pure 1935.  The second in this series is from the same film. Here's where the major fail occurs. We are supposed to believe that the man of the 21st is wearing a loose fitting coverall with multiple attachments for all his tech needs. The only success here is the beard.  Spot on hipster wear. 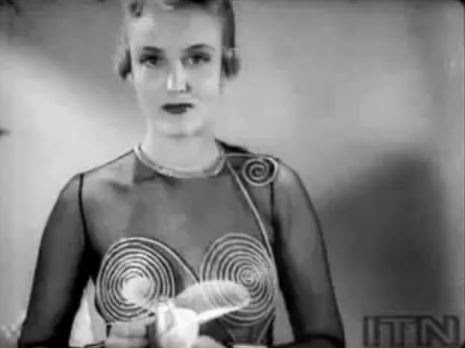 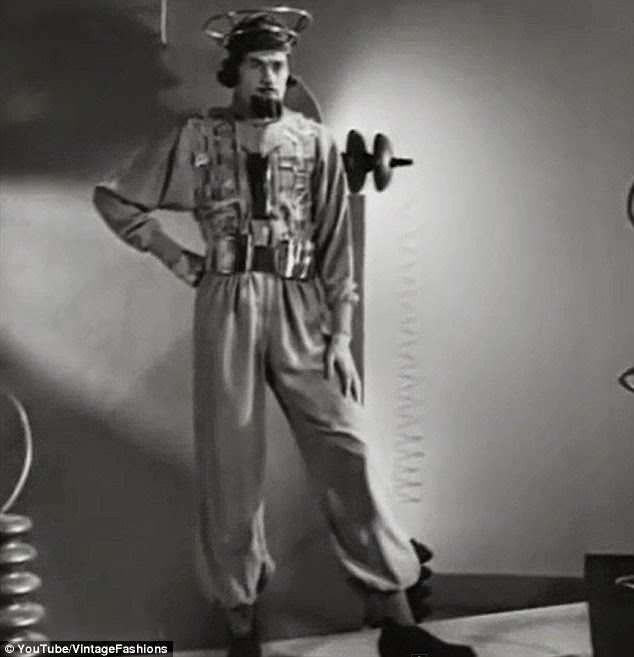 This image from the 1960s Italian film La Decima Vittima was designed by Courreges.  As a prediction, its a fail on every level. Ursula Andress' knee length dress could come from nearly any time past 1950. The soldier's uniforms are laughable, both as costume and as predictions of things to come. 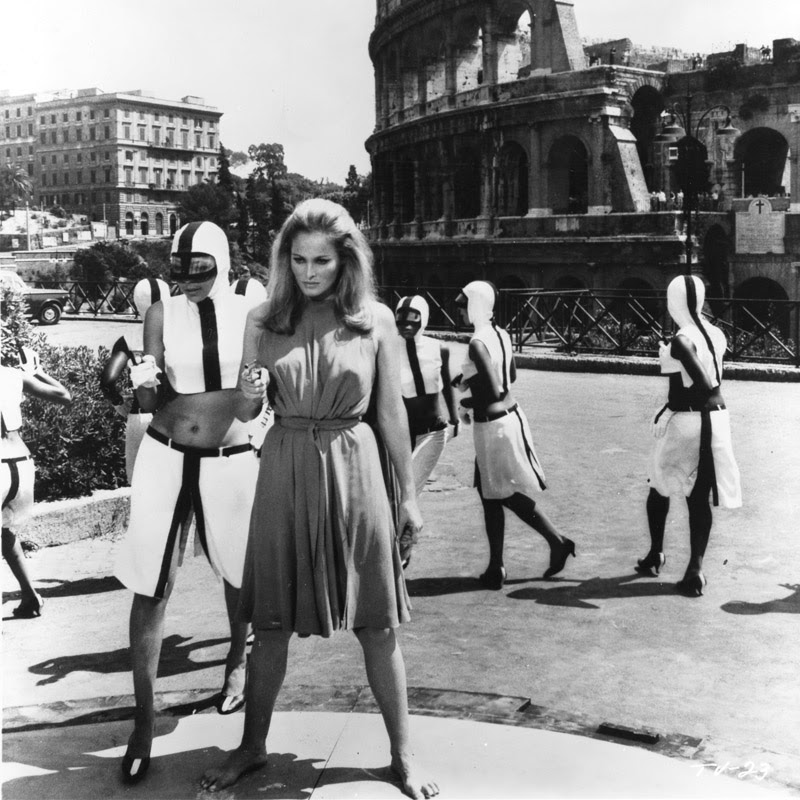 The original Start Trek.  On one level this isn't fair, since the time this is set has not yet occurred.  The reason to look at this though, is the way the designer, William Ware Theiss, took the hippie movement and morphed it into something else.  What does speak to us is the bareness, the pattern mixing, and a certain level of gender blurring.  Not a complete fail, but not a win. 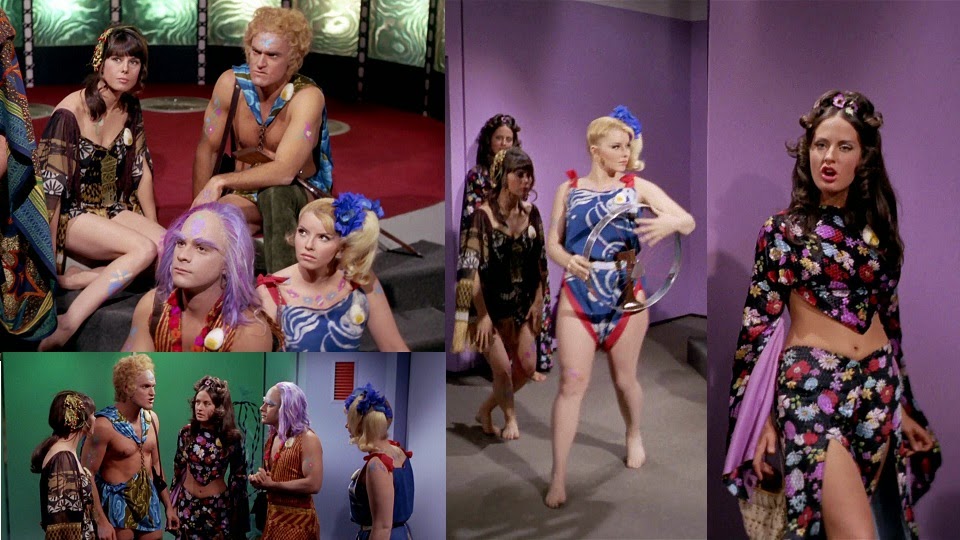 Space 1999. Now, admittedly, these are intended to be uniforms, but there are things here to see.  Hairstyles are completely contemporary to the later 1970s.  The polyester outfits designed by Rudi Gernreich don't really express what happened in the real 1999 at all.  The intent was to create a clean lined and forward thinking look, that expressed modernity. What resulted was a look that stamped 1977 all over every inch. 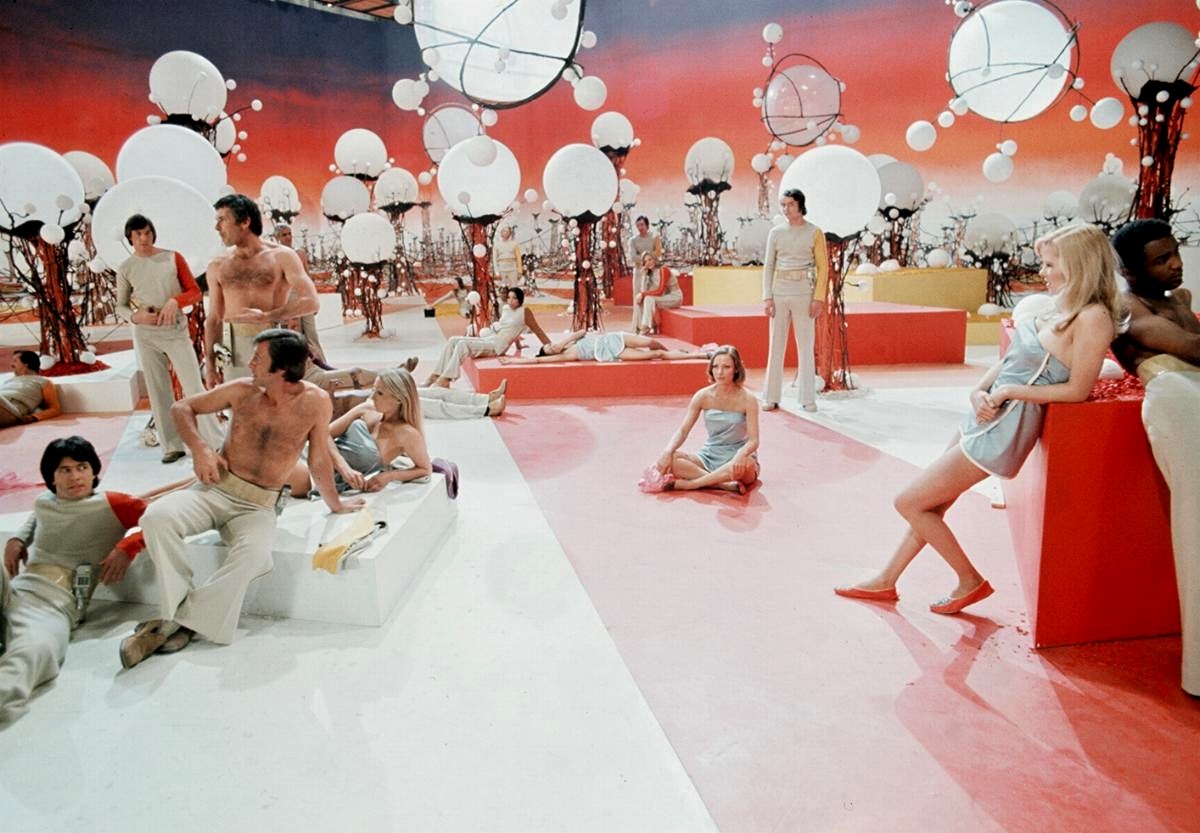 1982, Ridley Scott, Blade Runner.  In my mind its one of the few times that future prediction gets anywhere near cultural reality.   The biggest reason for my feelings about this are based on the design of the film showing a massively polyglot culture, where references are smashed together creating entirely new Attire phrases. 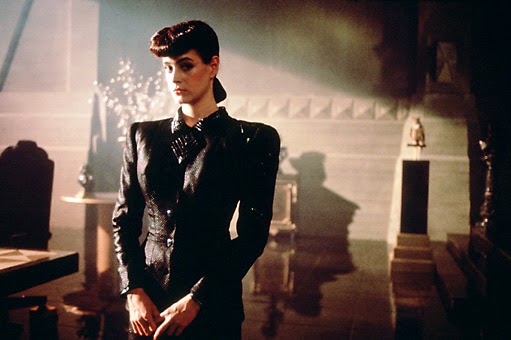 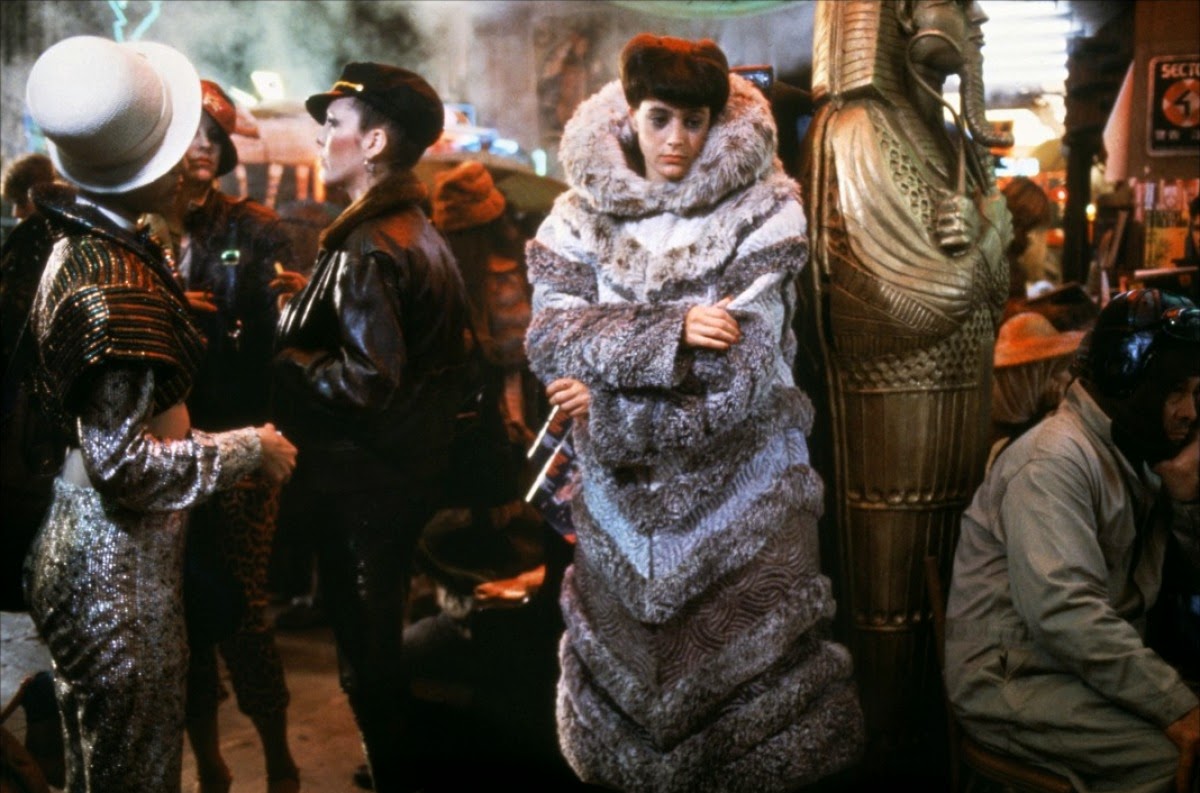 Meanwhile, back at Star Trek.  The Next Generation broke no new ground with women's fashion, but the boys got pushed a round a good deal.  Now, neither of these pictured looks is part of the vocabulary of fashion as yet.  But that mini-dress/tunic sure has walked down more than one runway for men of late. 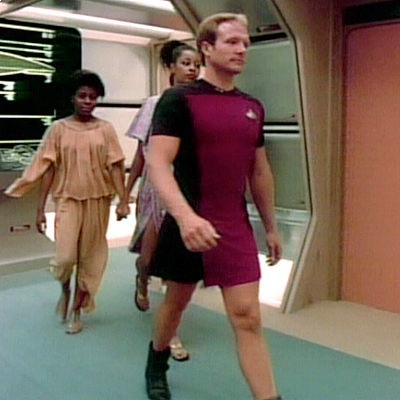 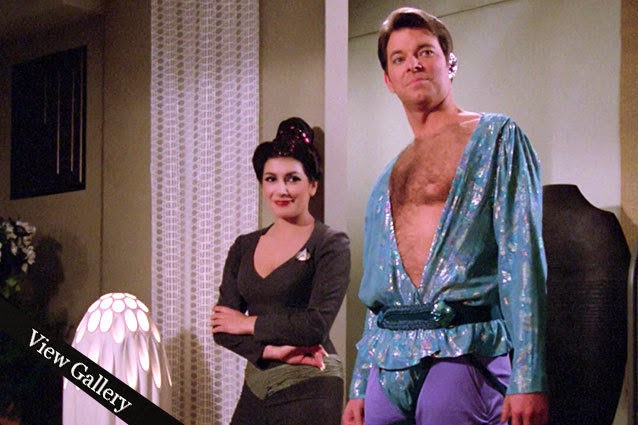 Oh, Chris Tucker, you scamp, you.  The 5th Element, designed by Jean Paul Gaultier was a pretty successful evocation of another time.  And he clearly had a ball doing it.  The amount of cross cultural, cross sexual, cross everything, really things he produced speak quite well to our increasingly global culture.  Was it a full on success?  No, it wasn't really meant to be more than a cartoon, but certain aspects of it are fully contemporary to the  21st century. 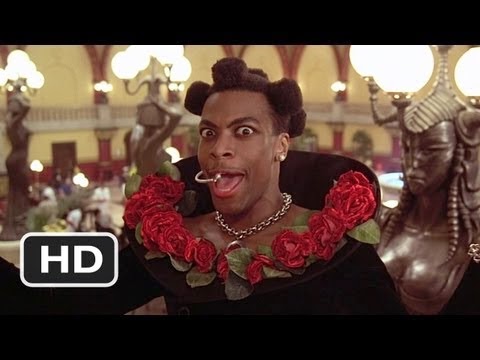 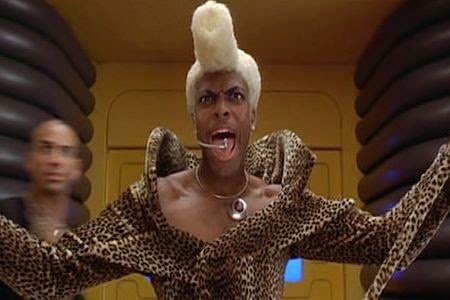 And lastly, the Hunger Games films have taken that cultural melange notion and run with it.  Is this edgy, far forward fashion?  Nope.  Pretty much anything you see here can and has walked a current runway, but as a subtle presentation of a near future time. I think this works admirably.  Its a matter of waiting to see it if is as spot on as it feels. 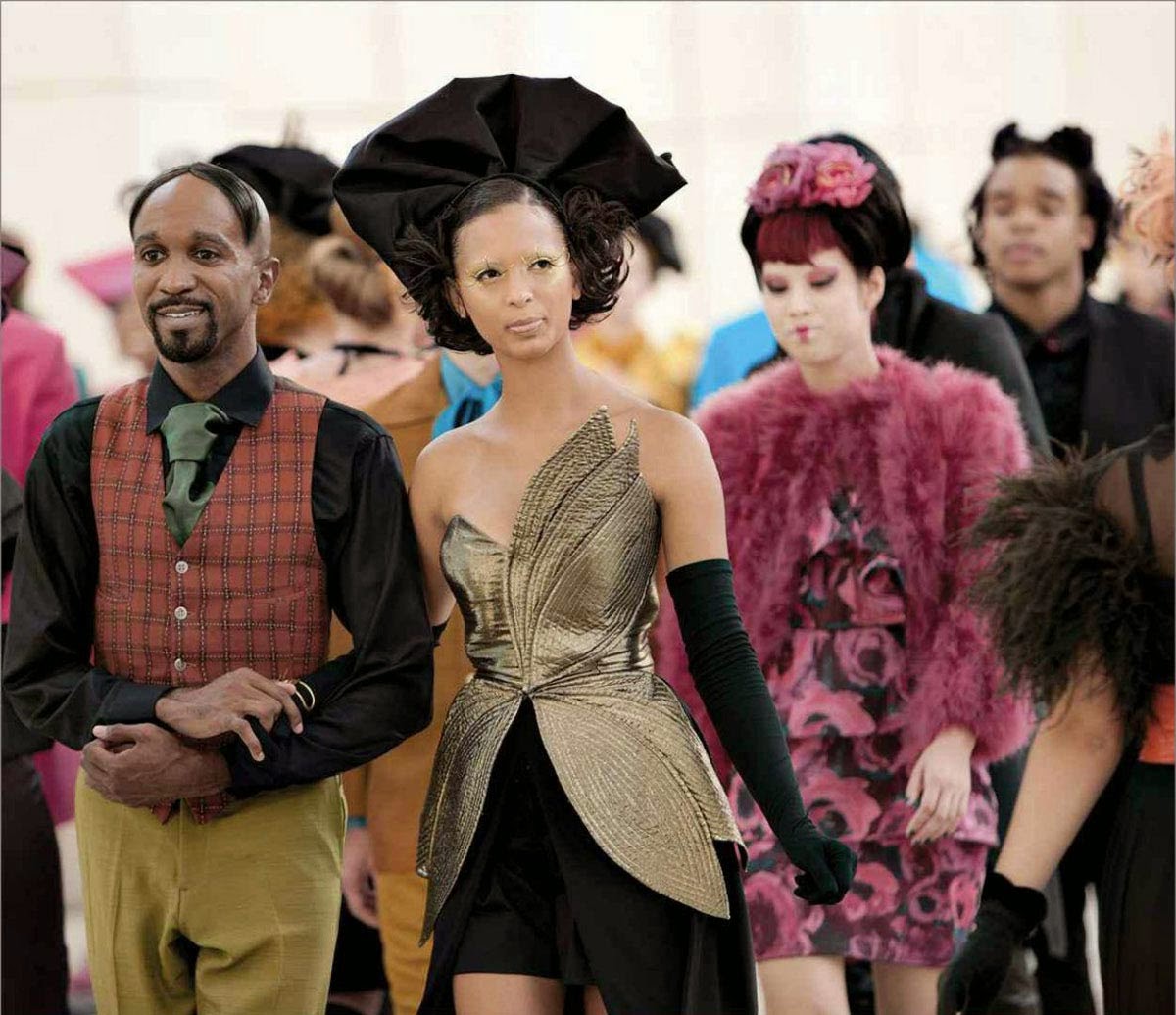 So in each case, there are parts that succeed, and parts that don't, but that's ultimately because the language of Attire is far to complex and facile a thing to ever predict accurately.
Posted by Paul G. Ellis at 7:21 AM