In this period of the year where so many celebrate the notion of abundance, I am made mindful of how much we accomplish with quite little.  Of course when I say that, I'm speaking about the Attire language and how we all use it.  Its not always about having tweaked every accessory perfectly, having the most expensive of clothing, or even perfection of fit.
Sometimes its about the one thing that creates a singular expression by its uniqueness.  A single characteristic, like drape, volume, color, or texture can take a simple declarative sentence like, "I am not at work", and turn it into a far more complex telling of your day's story.
But the idea of making simplicity work in a manner that tells a multi-layered story can also involve finding that one seemingly uncluttered thing, but having its physical perfection of form, volume and texture do the majority of the storytelling.
Or it can be form and pattern that tell the tale, even though the initial pieces involved are few, and of utter clearness.
Below here I am presenting images, and my own take on what I think makes them sing out in a special way, through plain clarity. 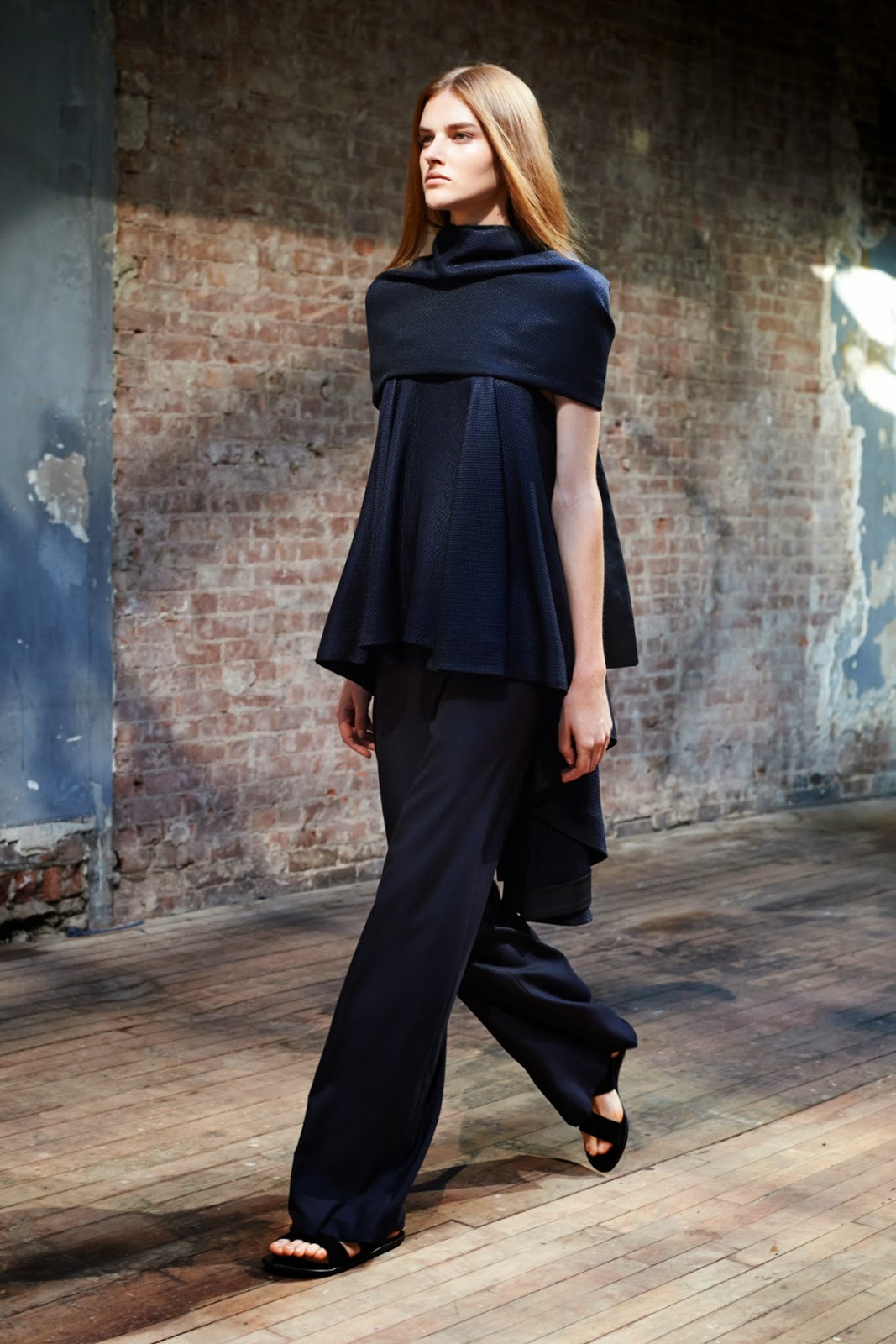 1: Without the tight shoulder wrap here, this would be an unremarkable pants and tunic. With it, it becomes an ensemble that has a somewhat dark undertone to it, a sense of being confined. 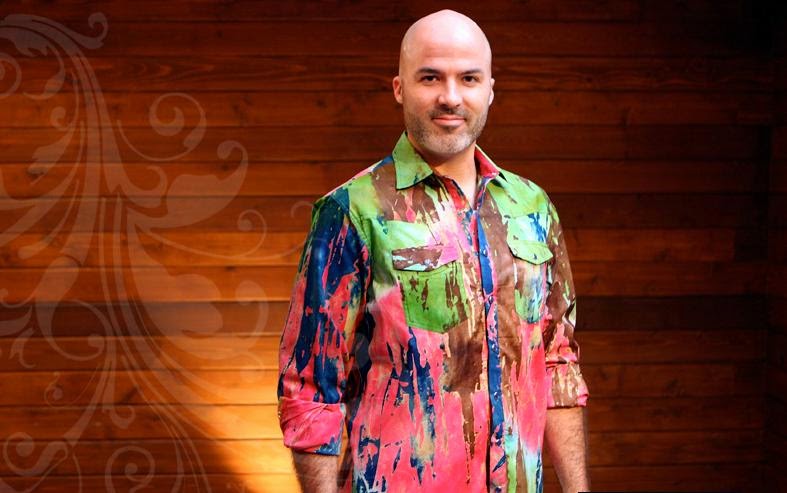 2: This one is obvious.  The alteration of this basic denim shirt by coating it with fabric paints in brilliant colors makes this a shout of individualism.  The wearer is no shy, retiring person, and probably has a good deal to say. 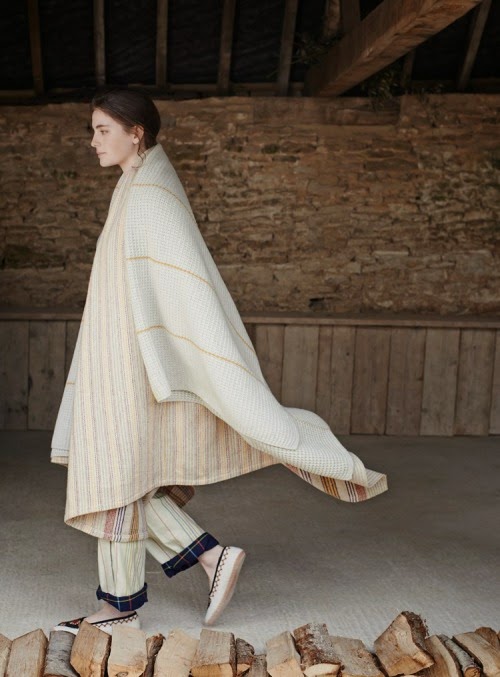 3: Texture, volume, and drape are the motivators here that take this plainly spoken set of words and makes the visual statement, quiet, but irresistible. 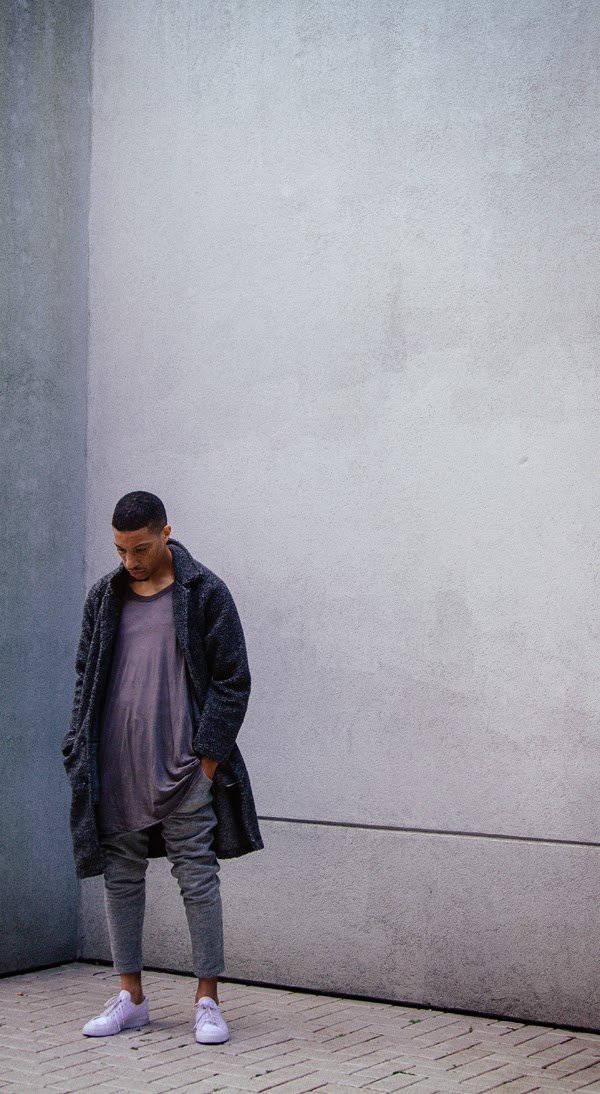 4: Like the previous example, this is about volume and drape.  But here, proportion is playing a larger role in the perceived sartorial sentence. And here we can see to that, apart from each other, the individual words in use are unremarkable.  Together, they sing. 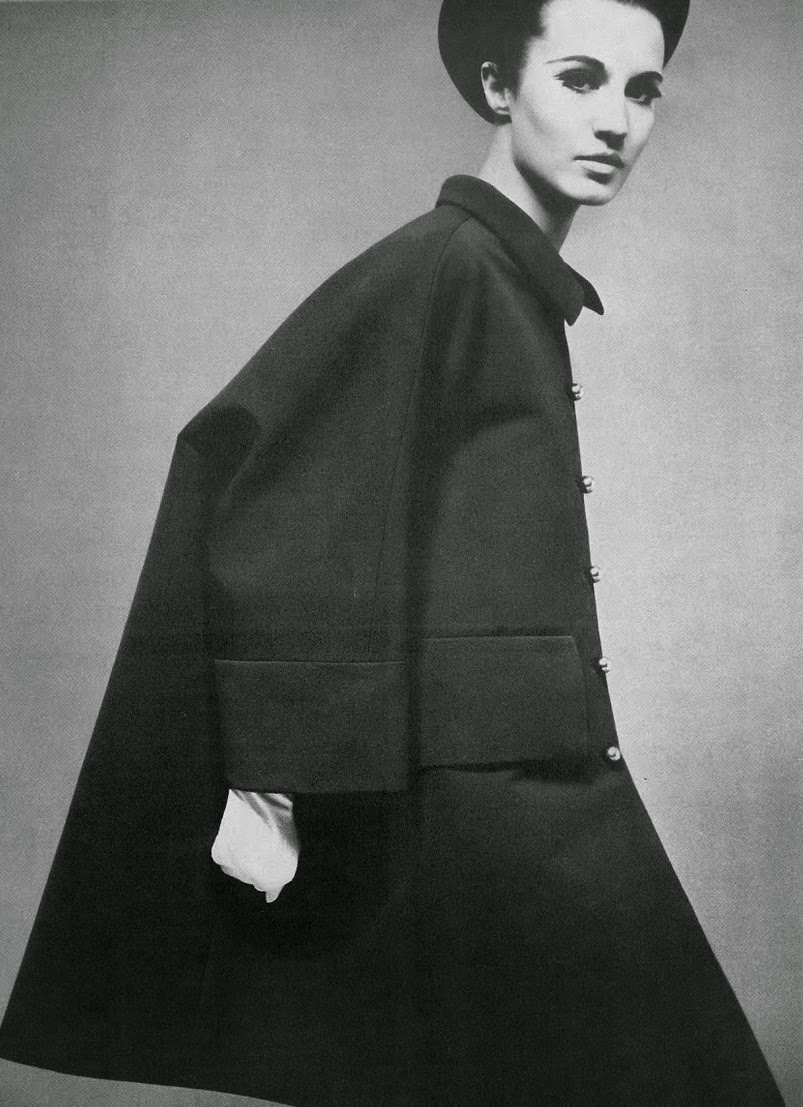 5: Sheer physical, structural perfection.  The coat is without flaw; and operates nearly as an inescapably sculptural sentence all its own. The wearer of such a coat would not need much to complete whatever they had to say. 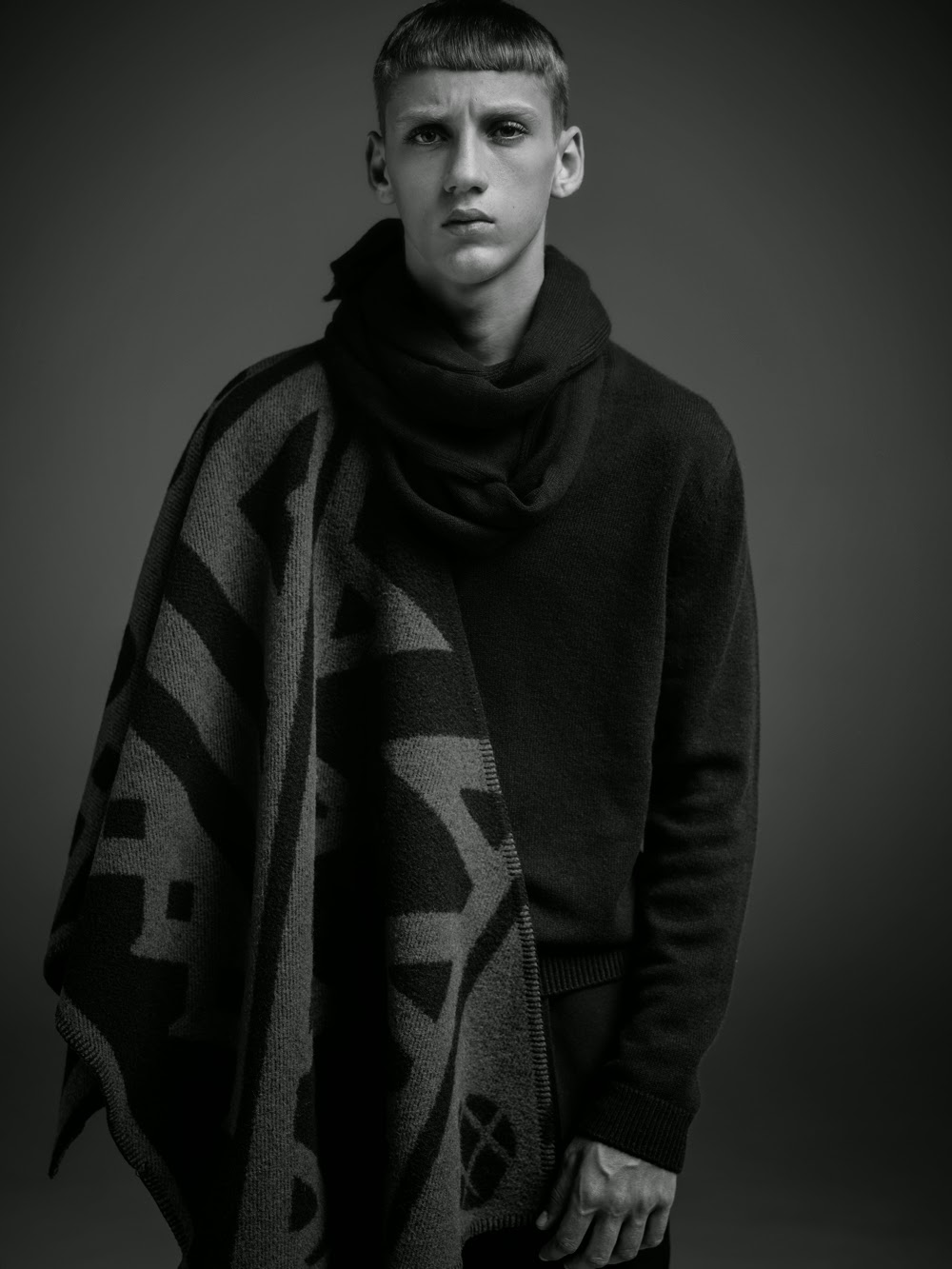 6: One large scaled pattern in a thrown scarf, and what was nearly mute becomes far more expressive. 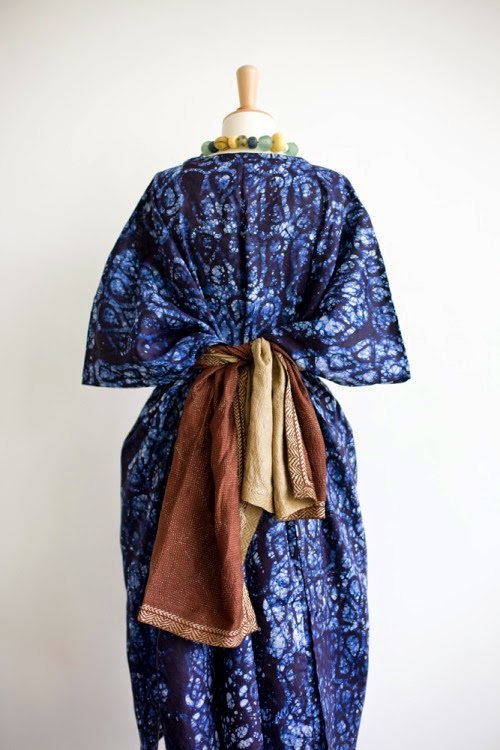 7: An essentially un-shaped rectangle of fabric becomes something poetic and romantic because of pattern, color, and the use of the easily knotted sash.  Only two elements here, and yet, the result is deeply suggestive of personal story. 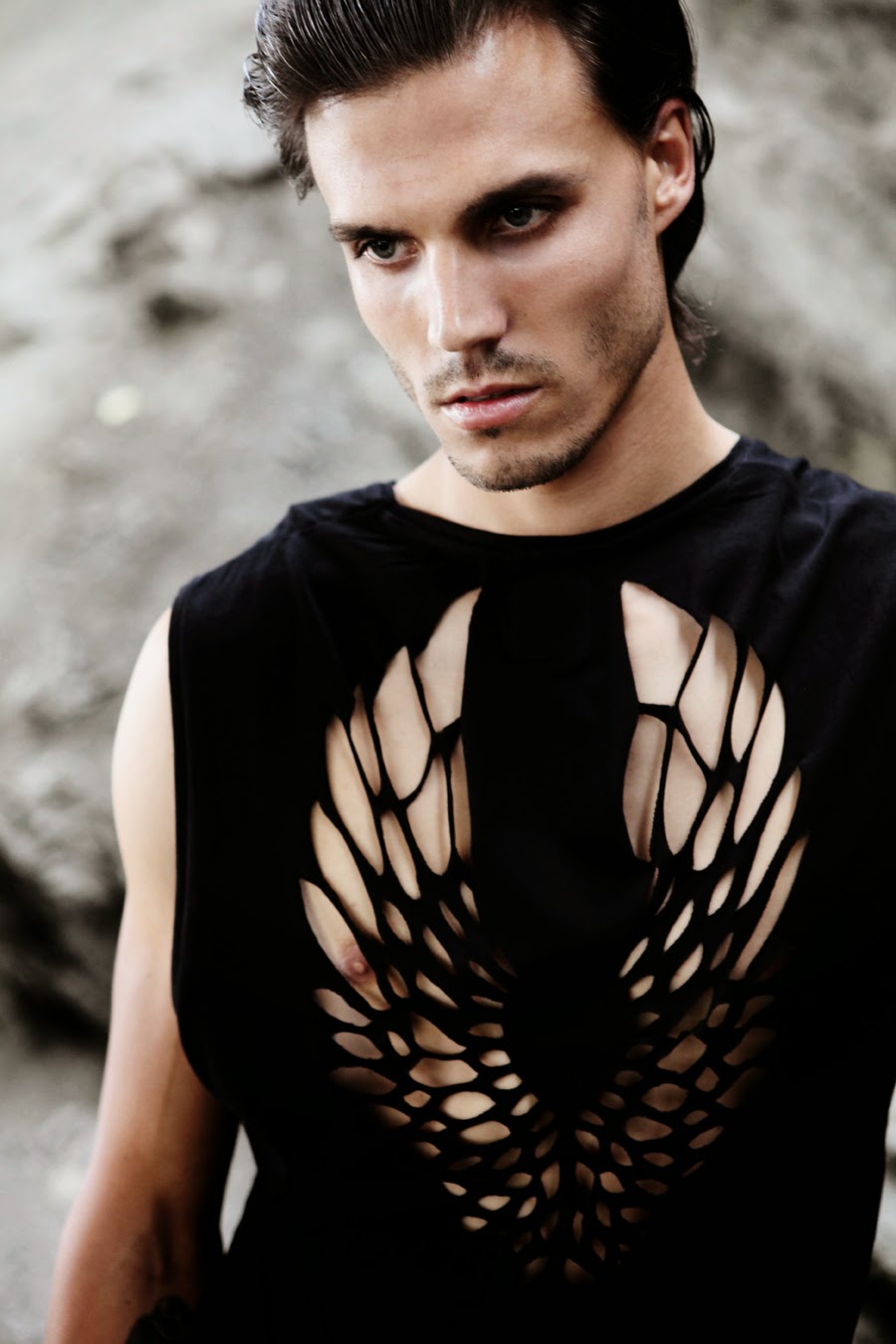 8: Another example of a single detail making all the difference.  Without the lyrical cutting of this plain black tee, this would be a near cypher of an image, from an apparel standpoint.  Change that one thing and story emerges. 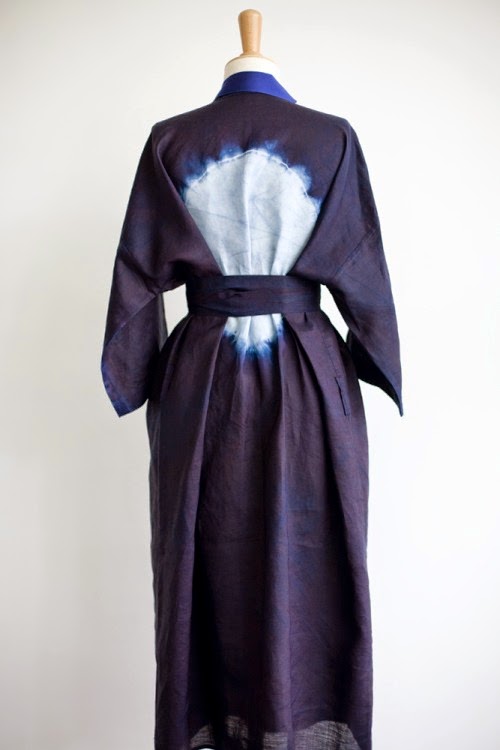 9: I saved this for last because this image made me gasp when I first saw it. This is the essence of what I am talking about here.  A magnificently edited visual statement, that, though devoid of any fripperies and extraneous detail, is potently dramatic, and implies a dense, intriguing life novel in the wearer.
Any of us can bring notions like these into our clothing conversation.  They needn't be expensive or perfect; only carefully considered, and used with thoughtfulness.