The weeks roll on, I'm gathering things together for my annual Xmas Day Open House.  And work just gets nuttier as we approach C Day.   But, I remain undaunted.  I will not fail you, nope, not me.
So here's your Scatter to help you through the weekend. 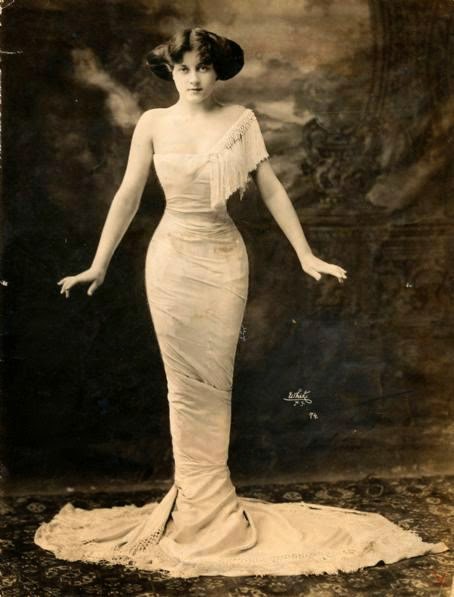 Every design aesthetic has its unique vision.  And the Belle Epoch had its own to be sure.  We've all seen endless images that reference that shape, but rarely are we given an opportunity to see that shape in its essential form, virtually devoid of decoration.  This image distills the notion of the female ideal to its base line.  Rounded shoulders, long neck, vast bosom, trim waist and accentuated hips tapering down virtually to a point.  All this is topped off with a doll-like extravagance of hair.  The ideal of female beauty, of course, shifts time, and time again, just as it does for men.  And each time we return to a look like this, the emphasis is slightly altered.  We don't go fully back to any prior look.  We may dally close by an older notion of perfection, but we won't recreate it entirely. 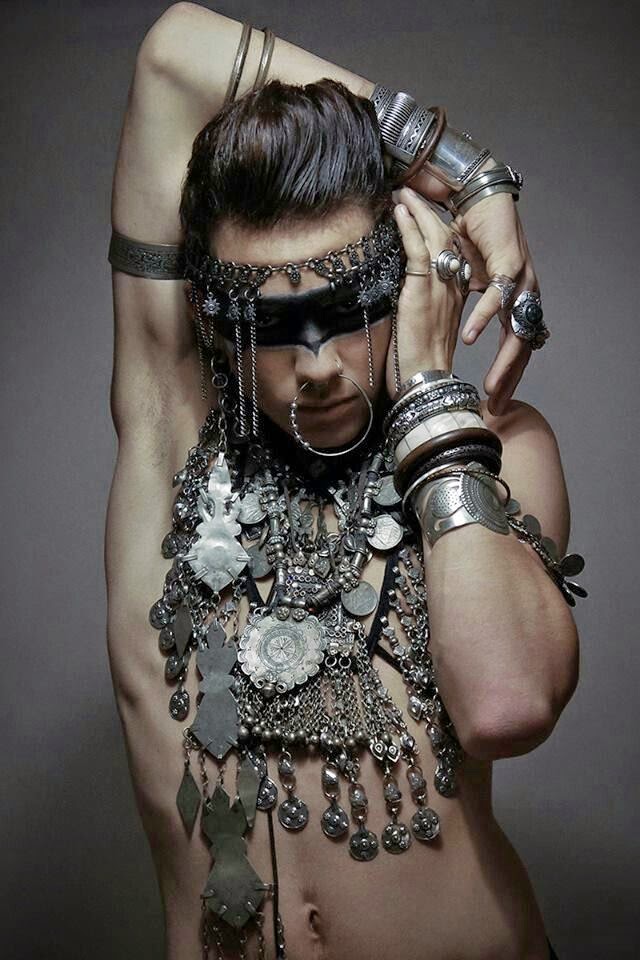 Sometimes an image is so potent, so commanding that I have to share it.  This is just such a thing for me.  Pronounced in its sexuality, but deeply divided in the series of messages conveyed, this young man, smothered in jewelry, is telling a complex tale.  While the mass of the jewelry speaks about wealth; the mask, and the large nose hoop, imply servitude, or even slavery.  So what place does this person occupy?  Some kind of concubine?  A temple dancer?  I find it interesting to pry images like this apart for all the tiny cues within its boundaries. 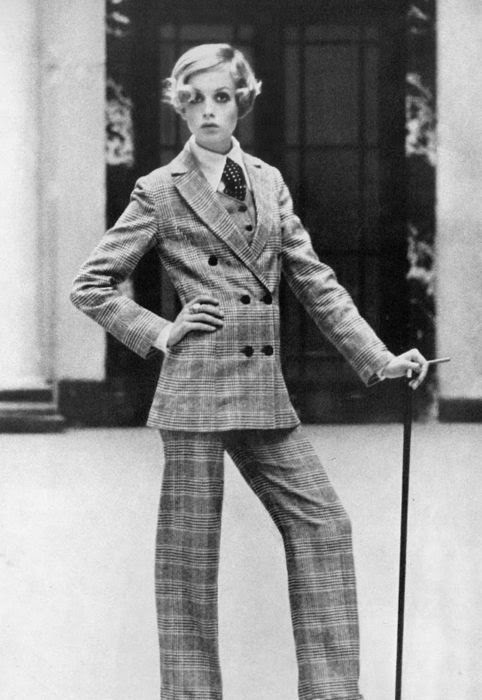 Menswear dressing for women has a pretty short history, when you consider how long this Attire thing has been going on.  This image of Twiggy in a plaid wool tweed suit with matching waistcoat is virtually a poster child image of menswear dressing in the 20th century. When this photograph was taken in the 60s, women rarely wore pants and certainly not in suit form. This would've been a very edgy look for its day.  And even today, we rarely see women dressed in such a complete menswear look. 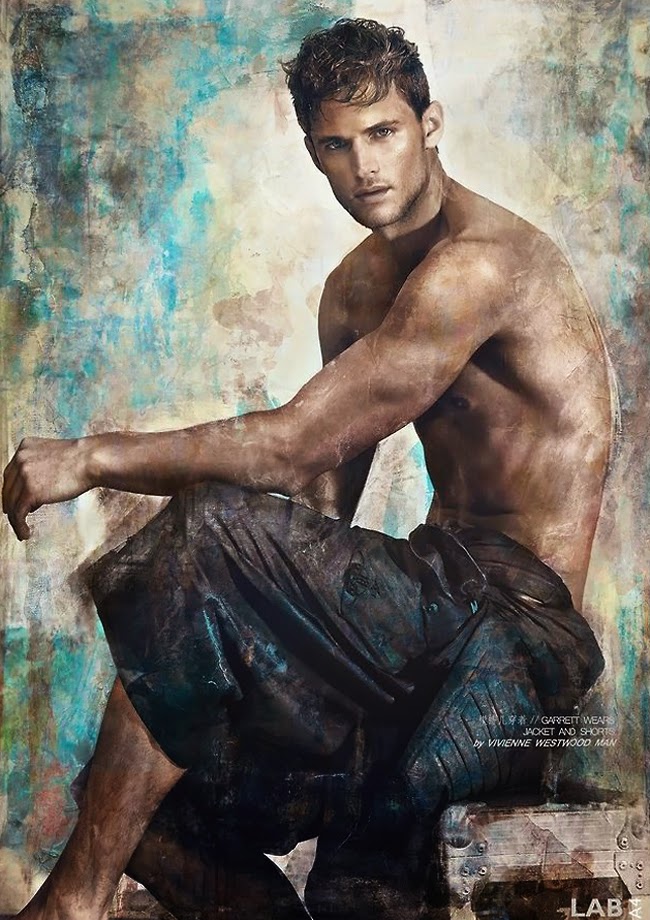 I've posted before about how annoyed I get when a fashion shoot image fails in all its essential requirements.  Here we have a Vivienne Westwood jacket and shorts  that has been styled so hard, and processed so much that you no longer really understand the texture, weight or fit of the shorts. And since the jacket has been tied round the model's hips, we can't make out anything of it at all, beyond the padded elbow patches.  Sure, the model is a hottie, but if the idea is to market clothing, then FAIL. 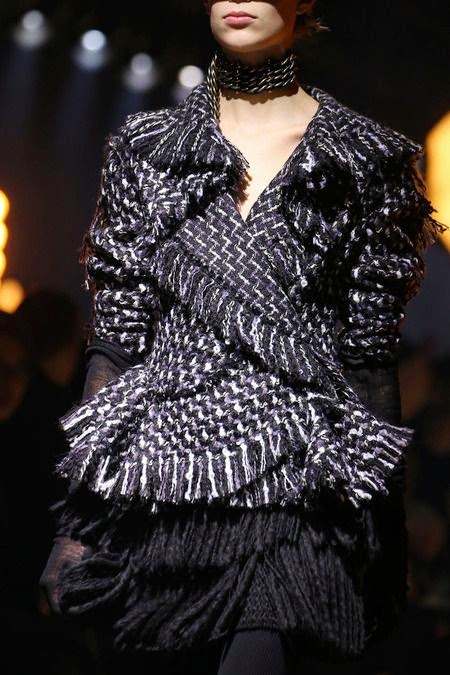 One of the things I appreciate in couture is when they take a thing and blow up the proportions to an extraordinary degree.  In the case here, we're seeing a tweed fabric made on such a huge scale that it nearly qualifies as de-constructivist work.  We can see the individual yarns of the warp and weft and determine exactly how they fit together to create the weave.  Wonderful work.  Plus the rough hewn quality takes the country aspect associated with tweedy fabrics and amps it up to operatic levels. 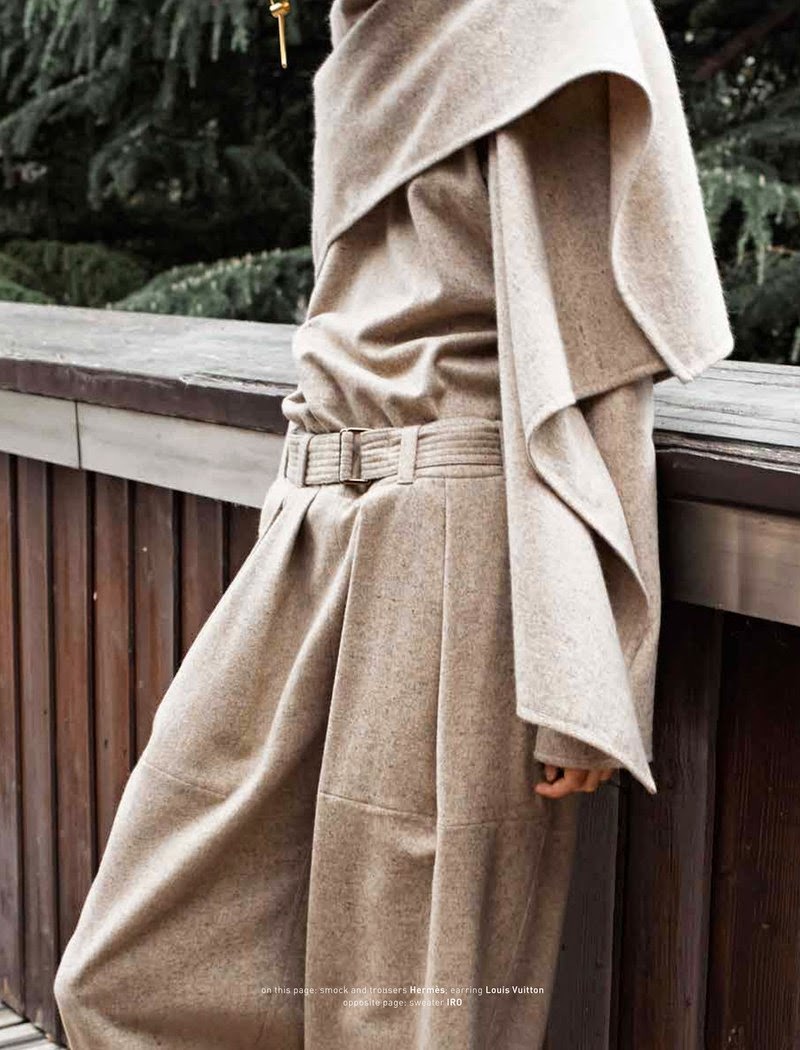 What strikes me most about this ensemble by Hermes is that it is utterly without sexual identity. We have gotten quite used to being able to instantly identify garments as being applicable to a particular gender identity, but this pair of loosely fitted pants, with the smock top and scarf could be for anyone, anywhere.  I find this sort of Sex ID Free dressing quite compelling. The only visual cue in the image that this is a woman is the dangling earring in the upper margin.  Fabulously undefined.  And I'd wear this in a hot second. 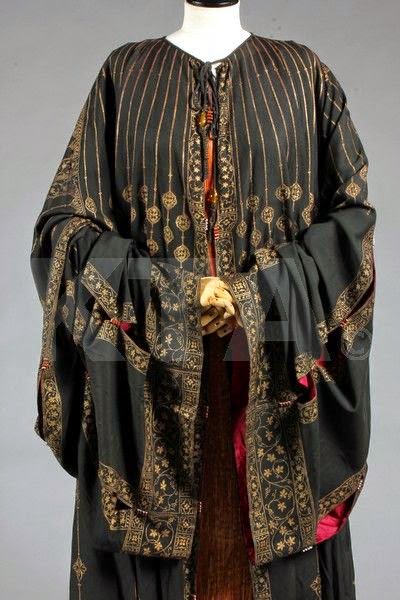 This spectacular black silk evening coat is from the mind and hand of Mariano Fortuny.  Made in 1915, this coat is liberally stamp printed in gold in a unique nearly Byzantine pattern.  The full sleeves are split down their length, allowing the brilliant red lining to show through.  An utterly magnificent garment, that defies time.  Its combination of drama, and easiness make it unbeatable. 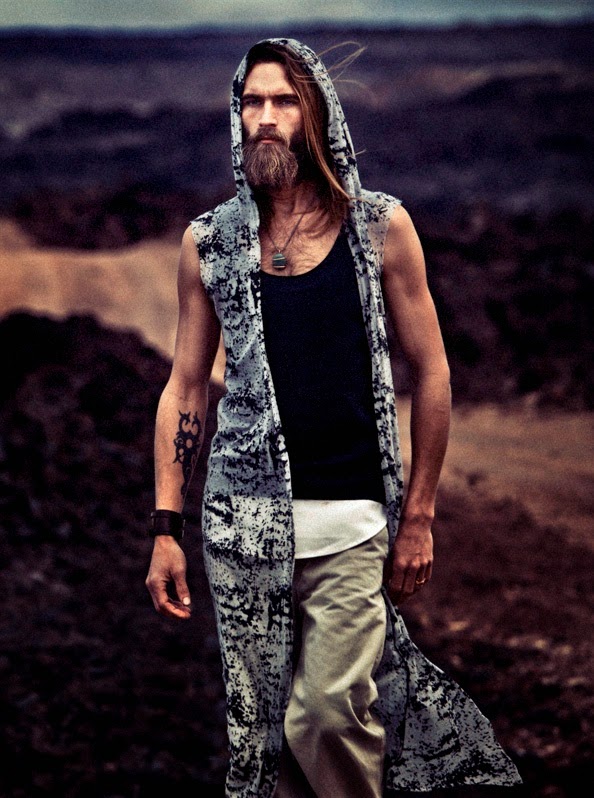 This is Mr Anders Lindstrom.  He's wearing an interesting and potentially widely useable new Attire word.  The long sleeveless hoodie vest.  Now in this iteration its really just a pretty accessory with little functionality, since its in such a sheer material.  But I could easily imagine such a long vest being put into play on a daily basis, made up in something sturdier.  I could see this, of course in a heavier cotton knit, like you'd make a standard hoodie out of.  I could also see this in a tweed, or a denim, or even in leather.  It could be wildly adaptable and easy to use for many.  I may just have to experiment with making one. (grinning) 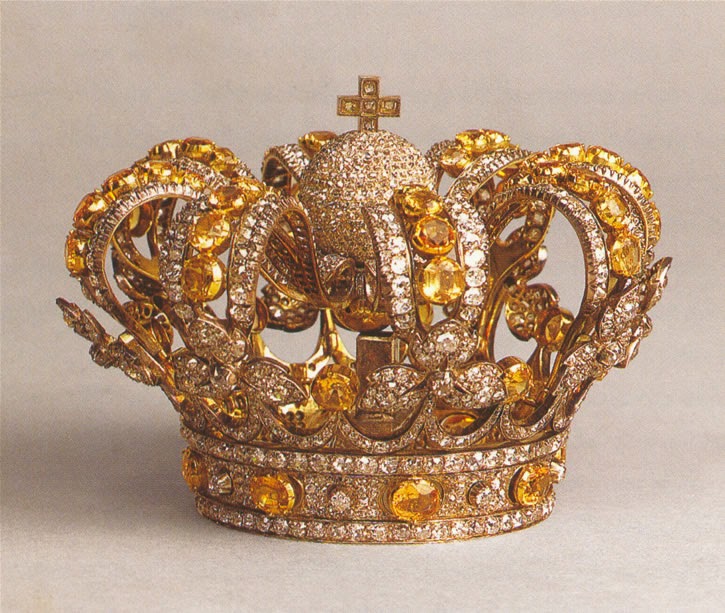 Now Here's a dose of serious bling to warm the cockles of your dazzle starved hearts.  Queen Isabella II of Spain wore this insanely bedecked crown.  Most royal crown jewels actualy do leave a bit of the base metal visible now and then. This crown of diamonds and massive topaz stones mounted in gold, leaves nothing whatever of the base structure in view.  This smaller scaled crown was devised for her after Victoria of England began donning a smaller crown that was easier to wear for her many appearances. 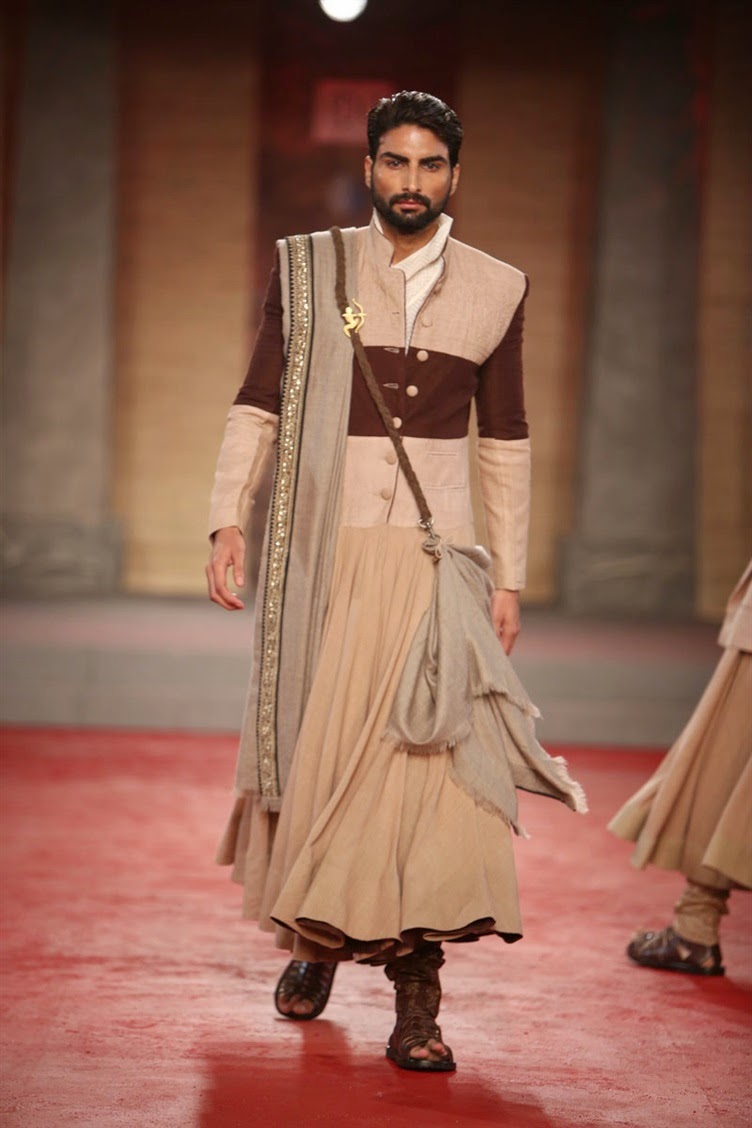 Anju Modi is one of the most popular and respected of Indian fashion designers, designing for both women and men. This image of from his Draupadi Menswear collection of 2013.  Here again I'm giving you a skirted menswear look to ponder.  The proportions and balance here are tremendous, and the functionality is really high.  Sure the skirt is quite long and full, but I can tell you from experience that it doesn't impede your ability to move.  And I love it paired with that color blocked jacket and the long scarf.  Its another way designers are prepping us guy folk for the continued emergence of the man skirt.

And with that swirl of skirts I release you all into your weekend. Have Fun!