Ho-Kay
So, its Christmas week, I have untold hordes arriving at my door Xmas day. I'm less than well prepared, consequently, I'm giving you another Scatter.  Its funny.  These posts aren't actually easier for me to do. Sometimes they are tougher in the end, but I don't have to do a long pull focus on a single topic, so in a sense I can bonce around and give you substance, but in little mouthfuls. So, somehow it feels easier to me, even if it isn't really. 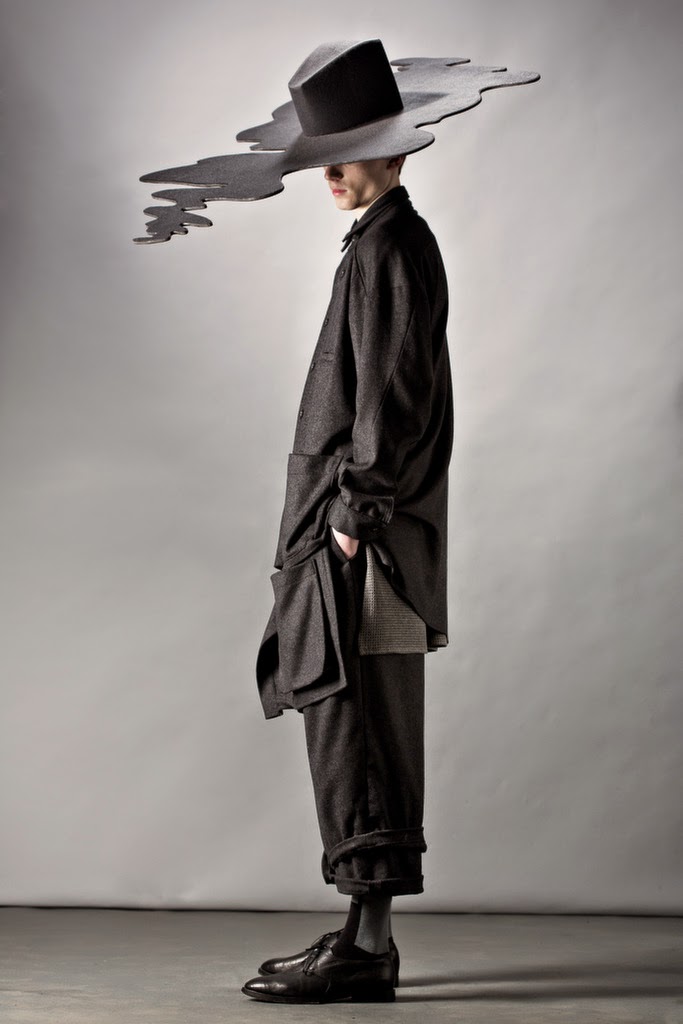 Post Gender Fashion.  I really love the idea of clothing that is not at base line defined by gender roles, or the desire to garner a potential mate.  We are all of us so much more than that simple process.  David Tennant did a series of photos that worked on this theme. This is one of them.  Sure, the hat is not a real world item; but the clothing, devoid of gender specificity, is wonderfully workable, especially in this quickly changing sexual ID landscape.  Everything on view here could, and may be worn by any gender person with equal aplomb and grace.  Its a notion that I suspect is going to continue to gain momentum, as the current, and newer generations, further their challenge to long held ideas of normative sexual roles, and imagery.  Applause. 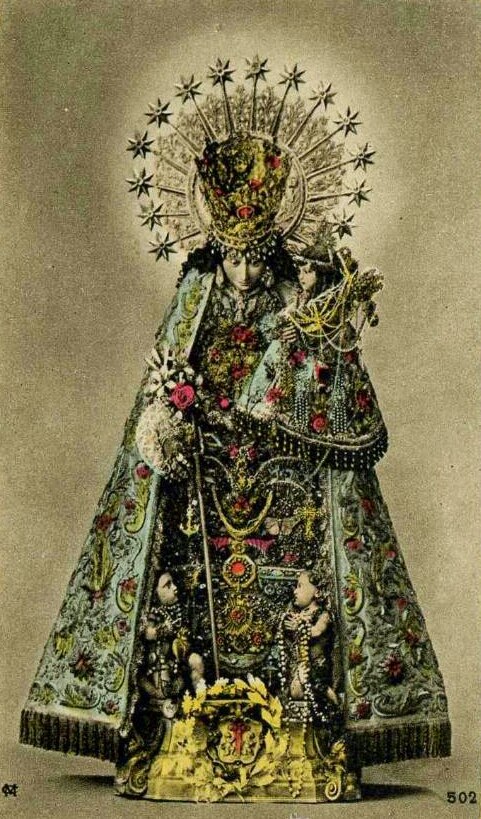 I suppose on one level this is not a part of the Attire language, and so isn't germane here because this isn't a real human person.  On another level though, it is.  This is how we ultimately express our veneration for, and objectification of women; and in particular, mothers.  Literally on a pedestal, garbed in fantastically opulent clothing, that oddly enough is a dead ringer for the garb of male priests in the Catholic clergy; this Virgin figure is at the apex of what we consider as female.  We may balk at the notion, and well we should.  This is woman as endless source of consolation, and repose; progenitrix of human life, and inexhaustibly patient care giver.  This is not all of woman, or even half of woman, but it is the image we have been treated with for centuries.  Its so powerful a notion that it invests our daily apparel from time to time with its shapes and imagery. So, I think its important for us to look at such things, and think about where, and how these images and tropes inform and affect our lives. 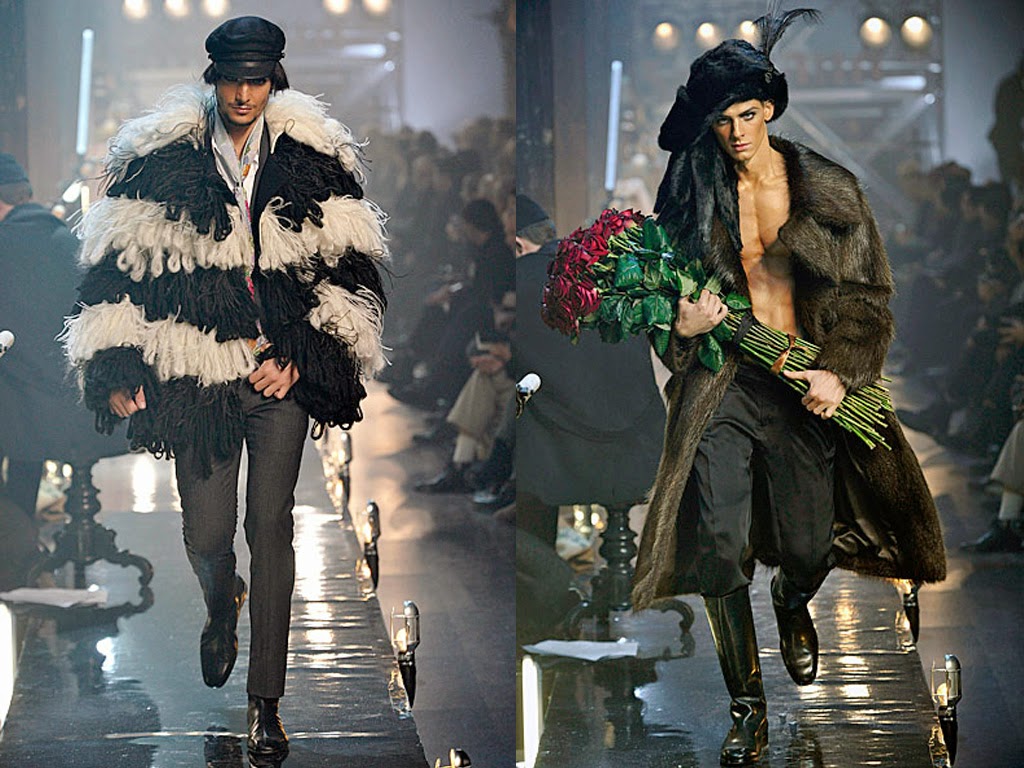 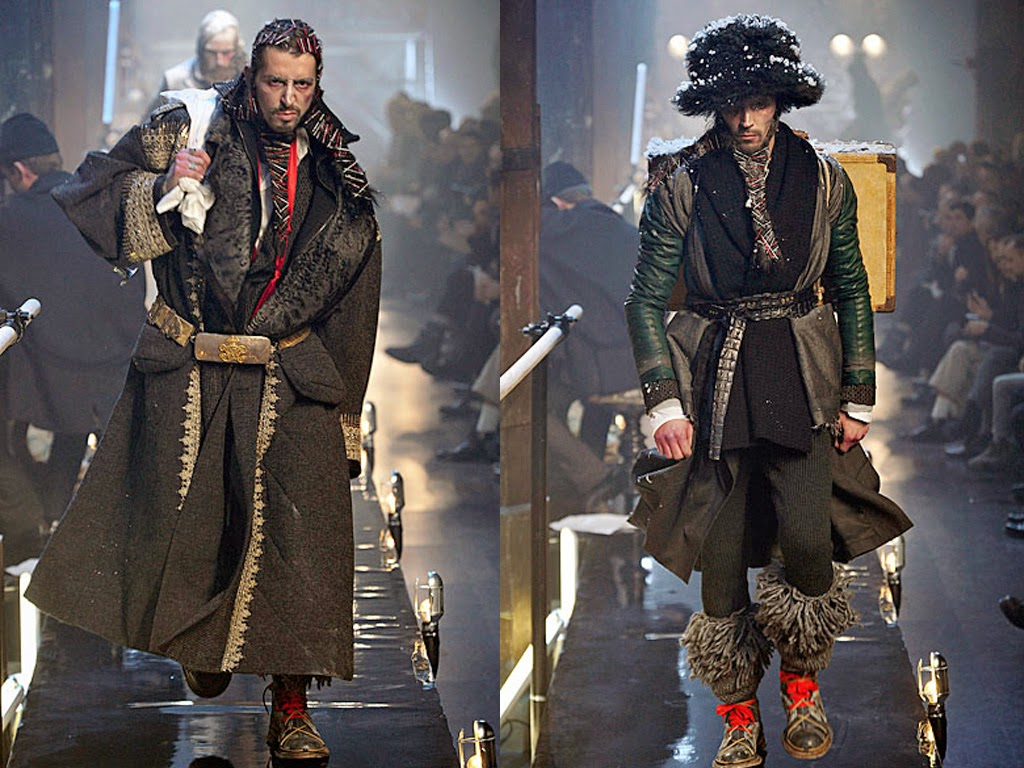 One thing you can say about the bad boys, they challenge us.  Bad boy designer John Galliano, who till recently was head designer for Dior, continually challenged us, in particular with his menswear collections.  Outrageous, frankly sexual, and more than a little dissipated, his view of men is dangerously sexual, powerful, and completely unconcerned with convention.  These images from one of his final shows before his "fall from grace"  tells that tale of masculine irreverence, and disdain for commonality to a fine degree. The sartorial statements here are about lack of scruple, moral ambiguity, and a potent lust.  Whatever you may think of the work in terms of its usability in real world terms, it cannot be denied that this is powerful stuff, and supports the idea of Attire as a symbolic language beautifully.

Monkey fur.  Okay, lets just get this out of the way. Yeah, that's monkey fur.  We can't take it back. We did this. Wealthy women desired it, wore it, and no one thought anything of it. (except that they envied them)  Today, with our greater knowledge, we understand how horrific it is.  We wouldn't, couldn't do this any longer; and with the rise of the technology available, fakes are so good there is really no need anyway.  But it must be said that we did, and in some places still do, hunt animals to extinction for their feathers, fur, and other valued attributes.  Now I know I'm going to piss some folks off here, but I'm going to be truthful.  Do I have an issue with animals farmed for use for their flesh, hide and other parts?  Nope. As a life long omnivore I would be the ultimate hypocrite if I did.  Do I have a problem with endangered animals being forced to extinction for Vanity's sake? Sure do.
Want to farm minks and make coats?  Fine, but use the rest of them, please.  Want to push rhinos to the edge of oblivion for their horns just cause you think it'll make your dick hard?  Think again laddie buck.  I have one word, Viagra.  No need to kill them. 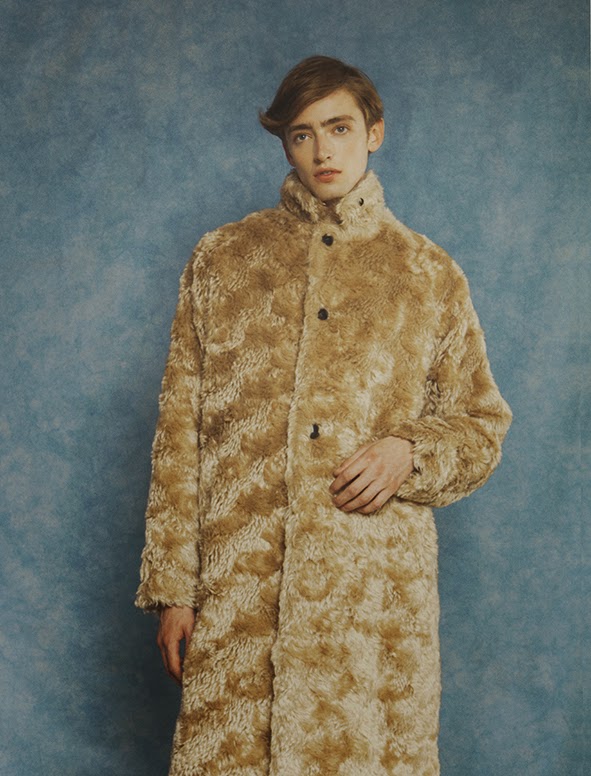 Speaking of fur.  What do you fellas and ladies think of this fake fur coat?  To be honest, I don't think he's the right model to really sell this look.  That said, its a great coat, and on the right person could look smashing.  No need for stripping the hide off animals for this, and its WARM too. 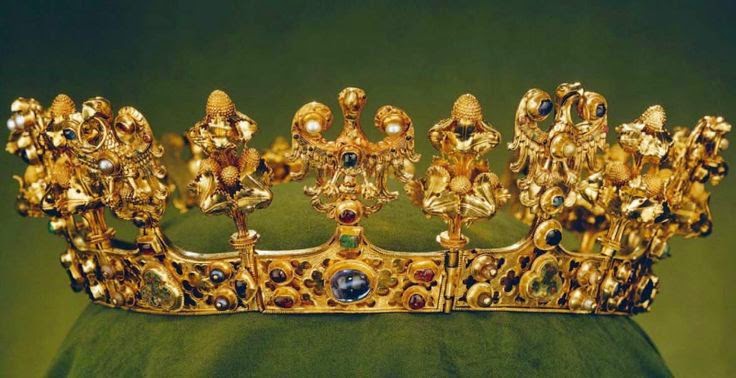 Now for a piece of historic bling. this crown of alternating eagles and trifoliate forms was worn by Blance de Valois, queen consort to the Holy Roman Emperor Charles IV in the 1330s.  At this time, as the European nations were finally beginning to emerge from the Dark Ages, workmanship was still at a lower level than it attained in only 100 more years.  The crown here is a rather rudely made structure in comparison to work from the 1400s and later.  Plus the influence of the byzantine is still in evidence with the pronounced barbarism of the design.  its an interesting piece of history in solid form. Its a way to see how a culture viewed itself, and what it thought itself capable of achieving. 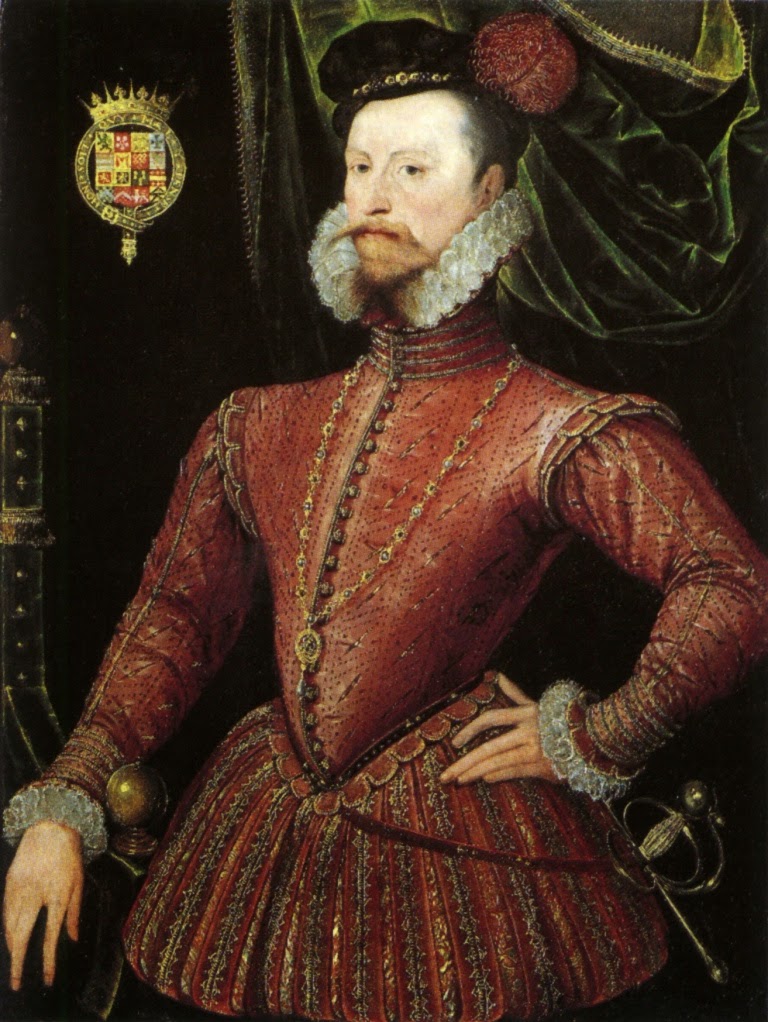 This ravishingly dandified gent is none other than Sir Robert Dudley, Ist Earl of Leicester, and one of the many close companions of Queen Elizabeth the Ist.  He was noted for his concern for his appearance, and this portrait tells that tale fully.  He is accoutred in a modish peascod bellied doublet, covered with pinking cuts (cuts through the fabric of a garment, using specialized scissors or metal punches to create textural patterns, and to allow the lining to be on view), double crenelated wings at his shoulders, acres of silver lace on his narrowly tabbed trunk hose, and an extreme angled collar with a double turned ruff.  This is the ne plus ultra of men's dressing at the time.  Oh, and you can just barely see his codpiece peeking out from between the canions (the part above the knee) of his trunk hose.  It was at that time out of fashion, but, well, Dudley liked people to know how much of a man he was.  And I suspect he wanted to remind Liz, too.

This gold velvet and lace coat came to my attention from Augusta Auctions, a well regarded purveyor of antique garments and textiles.  Its from 1915.  Its made up in gold silk panne' velvet, with netting, blonde Battenburg lace, embroidered motifs and a pair of huge tassels of silk twist thread. Such a coat would have been worn at home, for tea with visitors, or possibly at an informal evening dinner at home.  It would have only been suitable for outdoor use at an afternoon gathering like a lawn party.  As a word in the Attire language, it is now essentially unspoken, a dead word. 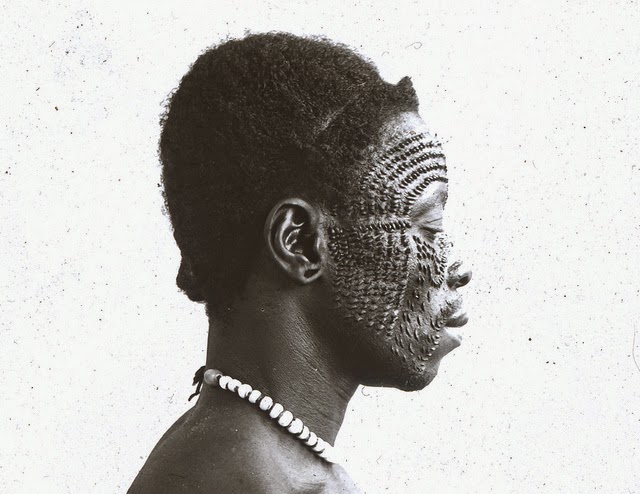 The limits of what we will do to adorn, alter, and otherwise distinguish ourselves from our fellow humans knows no limits.  At least, I haven't seen any as yet.  What we are willing to endure, the pain, suffering, and permanent change we are willing to encompass is beyond my comprehension.   This image speaks that idea out loud.  This young woman has for reasons of culture and personal individualism ritually scarred and patterned her face.  An extreme and impressive example of the Attire language in operation.  The image, the presentation is so important, so vital to self understanding and position in society, that no amount of personal discomfort is deemed too much.  But what of it?  We do similar things now, having the fat vacuumed from our thighs, and having synthol and collagen inserted under our skin.  We are not so far from this young woman as we might think. 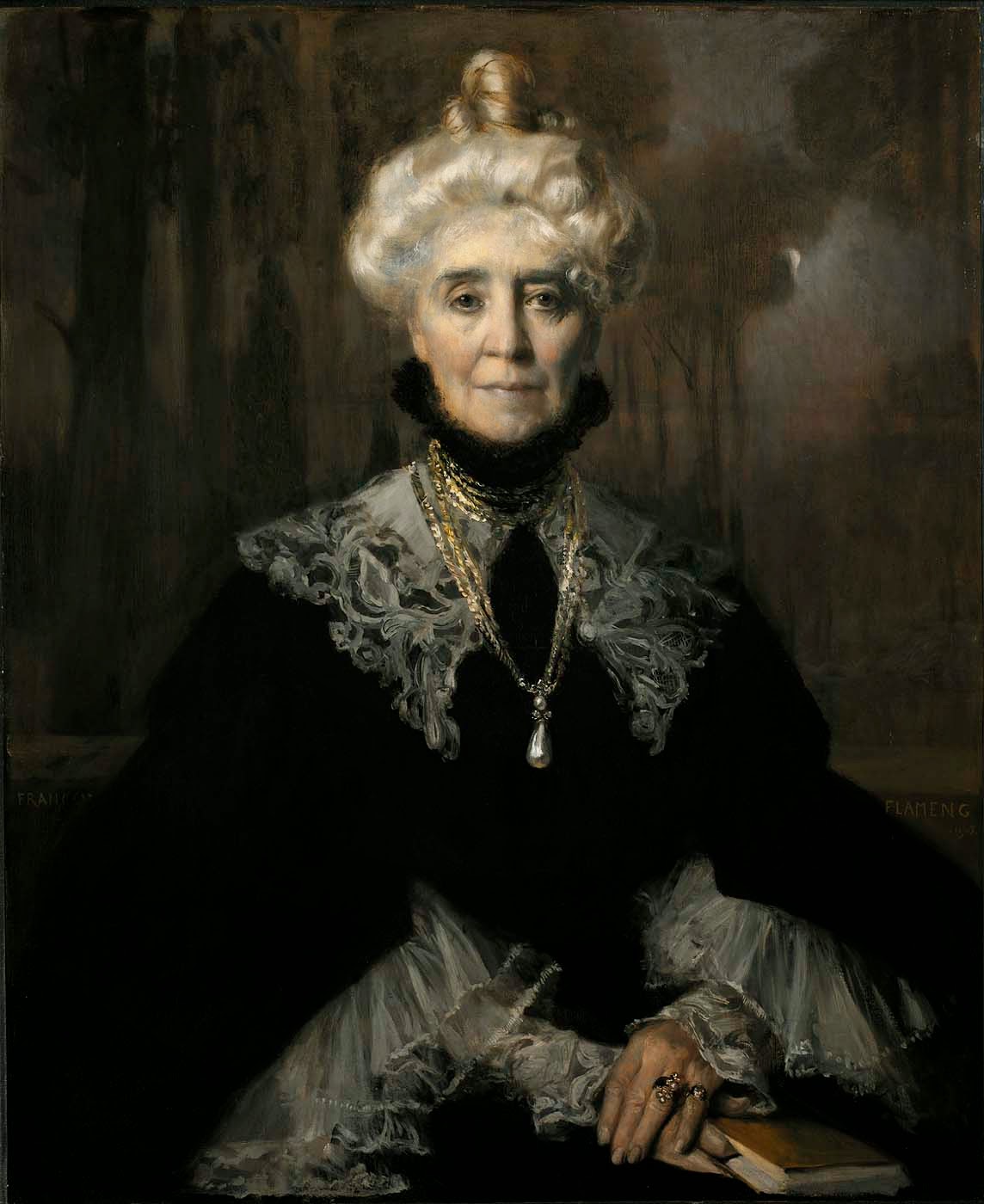 As a final note, something easier to handle, I suspect. This portrait is by Francois Leopold Flameng. Its a painting of Mrs Adeline M Noble, and it was painted in 1902.  Mrs Noble is painted wearing a remarkably stylish ensemble, considering her age and station.  She is also wearing her hair in a pronounced top knot, which was very fashionable at the time.  Apart from the stylishness and serenity of her image, I'm just so struck by this painting as a whole, that regardless of how much it is or isn't useful here, I had to include it.  So there.