We like to say, in fact we've done so for centuries, that women's clothing is overly fussy, too complicated, and that men's clothing is easy to get into and out of, easy to wear, and comfortable.  Lies. All lies.
For the vast portion of human recorded history, (and who knows what we were getting up to and into before that?) men's clothing has been at least as complex in structure, and number of pieces, as women's clothing.  Its really only in the past century that that reality shifted somewhat.  But where womens' clothing became generally simpler and simpler in structure and finish over time; men's clothing remained, and still does remain, levelly placed in a morass of traditions and physical details of construction.  Building a suit 3 piece suit for a man is a massively different, and more complicated process than doing the same thing for a woman.  The requirements of construction are more rigorous, and require a totally different set of technical skills to do effectively.  All you have to do is watch one episode of Project Runway where the designers are required to make menswear, and watch their consternation and fear surface, to know its true.
Anyone who sews can tell you, sewing menswear is a much more difficult task than womenswear.
But lets just take a quick look here at the back story, through some imagery, of how complicated and labor intensive it was to make men's clothes, and ultimately, to wear them. 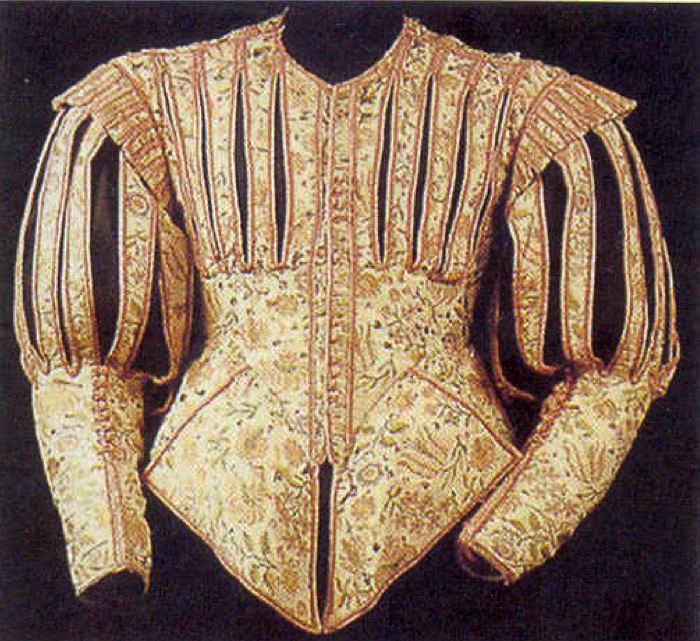 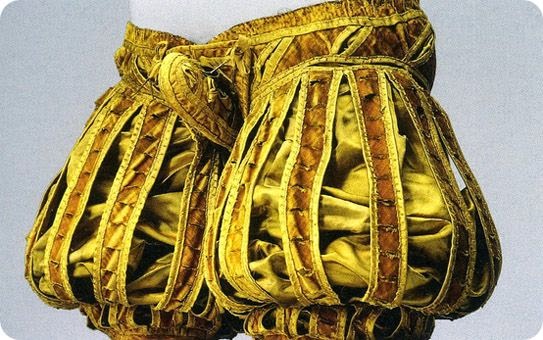 For a very long time, hundreds of years in fact, men wore stockings that went to the waist.  At first there was a center front piece that was separate and has to be tied on to the hose, which were, by the way, tied onto the waist of the doublet so they wouldn't fall down, or held up with tied garters.  That center piece eventually became the codpiece, jutting out so famously in many a 16th century portrait.  But it wasn't only the hose that tied in place.  The upper hose, or trunk hose as sometimes they were called were also tied to the doublet waist. Sleeves were separate items too, requiring ties to hold them on.  The shirt had ties at the wrist and neck.  The shoes had ties or buckles. The gentleman might wear a coif under his hat, which also had ties, and then of course gloves, belt, sword belt, hat, pomander, purse, and cloak, coat or cape.  All in all a great deal of stuff to face up to each morning.  So, did women have it rougher, sartorially? 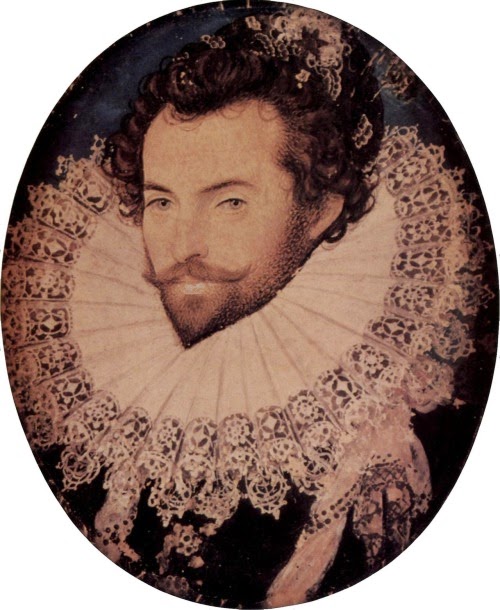 Only in two areas really. Sheer mass of material, and the inability to breathe correctly due to very likely improper corseting.
Sure, things changed, as inevitably they do. 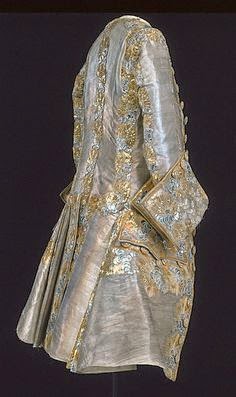 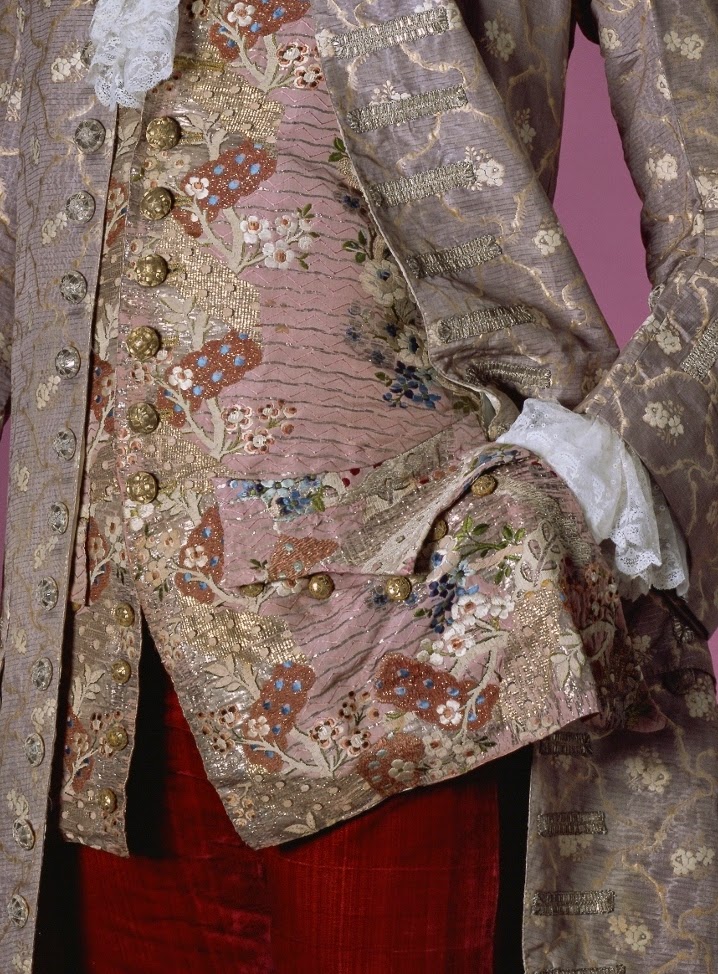 Men's clothing seemed to become easier, though when you look at the cut of 18th century suits, how a man could move his arms is an astonishment.  It wasn't till the 1800s that menswear began to change in a substantive way, at least, superficially. 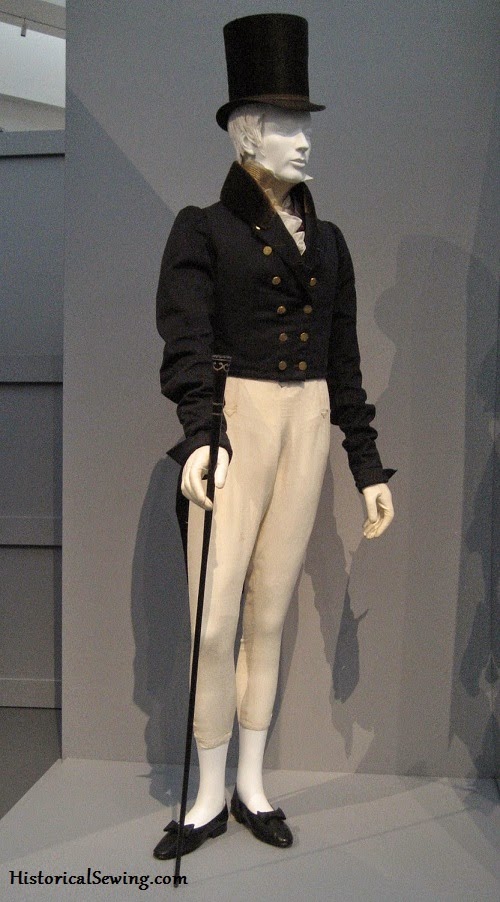 Menswear lost a great deal of the excess baggage, but the attention to detail turned inward.  By the end of the 1800s the level of skill required to produce a top level man's suit of clothes after the fashions of the day, required many years of apprenticeship.  In my library at home I have a text by Jason Maclochlainn called "The Victorian Tailor". Its currently in print, and chronicles in extensive detail the techniques and methods used in classic men's tailoring.  As someone who has been sewing for decades, I can tell you I'd approach this sort of thing with the greatest trepidation. 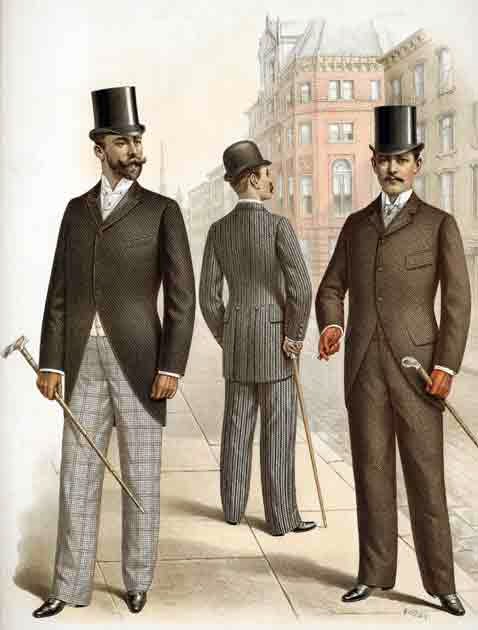 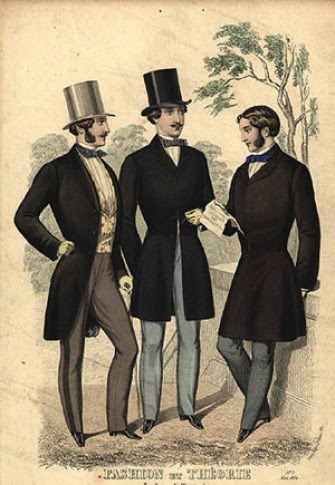 But, my point, as it was at the beginning here, is, women are getting off easy in the structure and complexity end of things. And do I think that's a really good thing?  Well, its double edged.  Are women getting to move more freely and experience the world more fully because their clothes are less hampering?  Sure they are.  Are they having to suffer with shoddy, ill-made clothing that hasn't the requisite under-structure to last long. Sure they are.  Unless a woman is buying clothing at the pret-a-porter level or above, her clothes will wear out faster than a man's will.  Still the same old inequities, carried to an internal structural level.
Posted by Paul G. Ellis at 4:17 AM