I know I just did a Scatter post two days ago, but frankly, I have had such a wealth of imagery worthy of discussion come to me I thought I'd give you another round.  Think of it as an early Holiday gift. 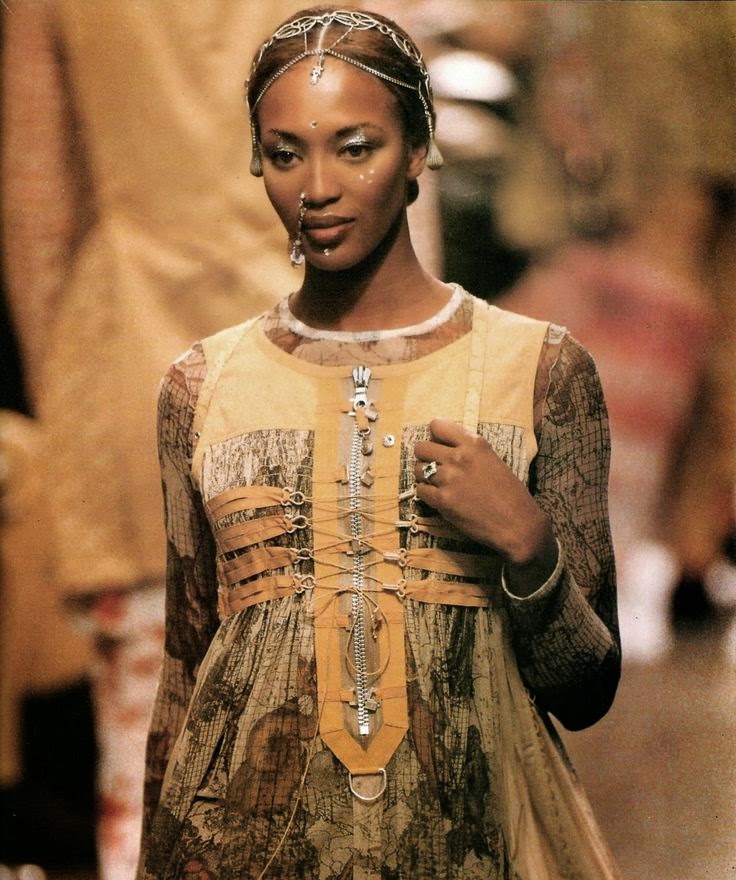 I found this runway image instantly beguiling.  The combination of deconstructivism and polished finishing of that printed chiffon for the dress is a wonderful dramatic tension.  Its a kind of visual dissonance that manages to at the same time create harmony.  As well, its a kind of combination becoming increasingly common as we explore the growing reality of our global community.  That we have here a dress made of silk chiffon, printed like an antique map, closed with shiny and obvious hardware; and then that subtle harness bound around with cord through ove-rsized hooks and eyes. And finishing it off with things gleaned form other cultures and from imagination with the jewelry and make up.  This becomes a paean to global community.  This woman could be from anywhere, and going anywhere. 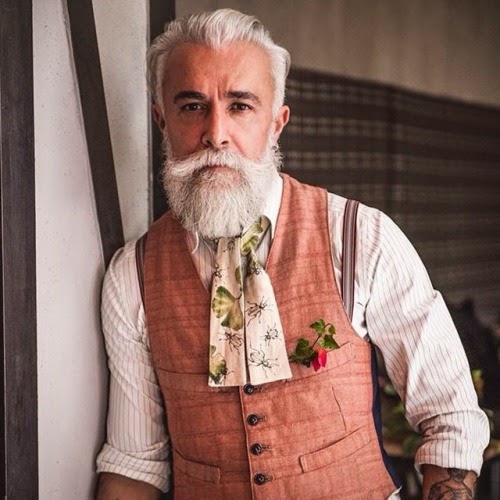 Occasionally it is one small, casually rendered detail within the complete Attire sentence that takes it away from being a bald statement, and makes it something far more.  If this fellow were not wearing that bow tie, just loosely thrown over itself, or not wearing it at all, this set of apparel words would speak far less eloquently than they do with it.  Its the presence of that tie, in that print of gingko leaves and insects, that makes the whole thing poetic looking; and takes it also, a step or two away from being straight up hipster gear.  Its a simple thing, that makes all the difference in the world to what is communicated to us. 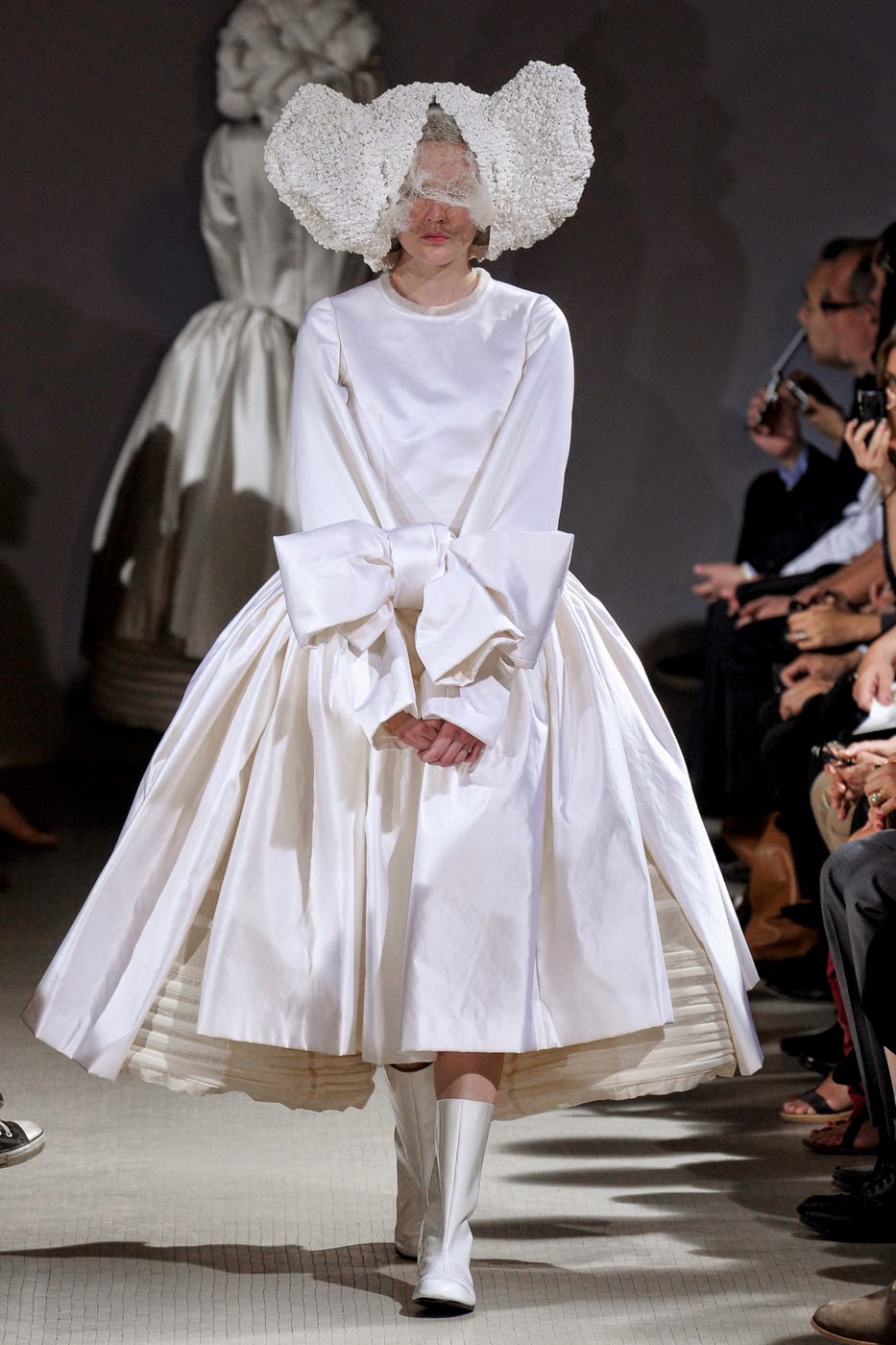 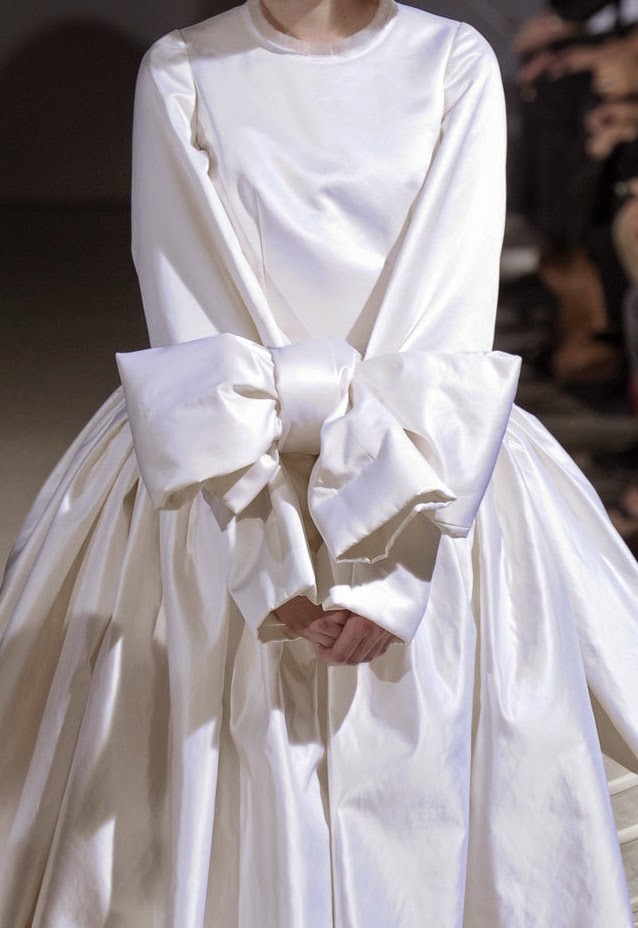 Comme des Garcons, Spring/Summer 2012 collection.  Though it might look like it was the collections requisite wedding dress, in fact it was an all white collection, and many of the looks had this same feel.  One of the things I've always appreciated about the house is that they continually play with scale.  Often the human is diminished in importance by the volume and apparent mass of the clothing.  Sometimes the body proportions have been wildly skewed.  But always in a really interesting way.
In this dress, the skewing of proportion is overall, which is more readily apparent when you look at the detail shot.  Its as though either the dress is growing larger slowly, or the model inside it is shrinking.  So the final result is very subtly disturbing, even though we're being presented with something that could seem overly sweet and girlish. 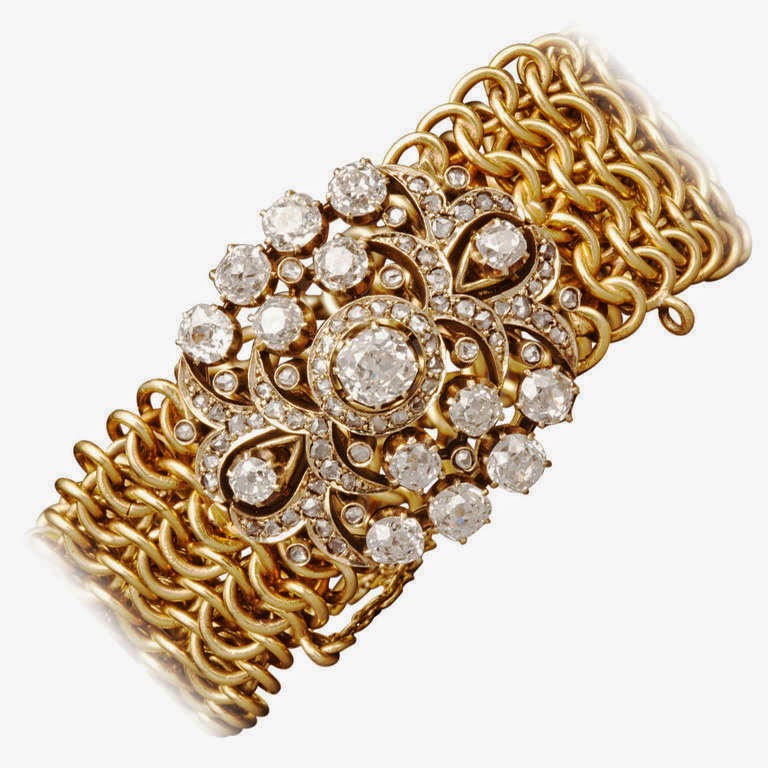 Next in line today, this Russian bracelet from 1840.  Its made entirely in rose gold, with a central motif in diamonds that has a floral feel to it.  An interesting juxtaposition between that, and the chain mail form of the bracelet body.  Even in something seemingly so direct, there can be subtext and hidden meaning.  All you have to do is look. 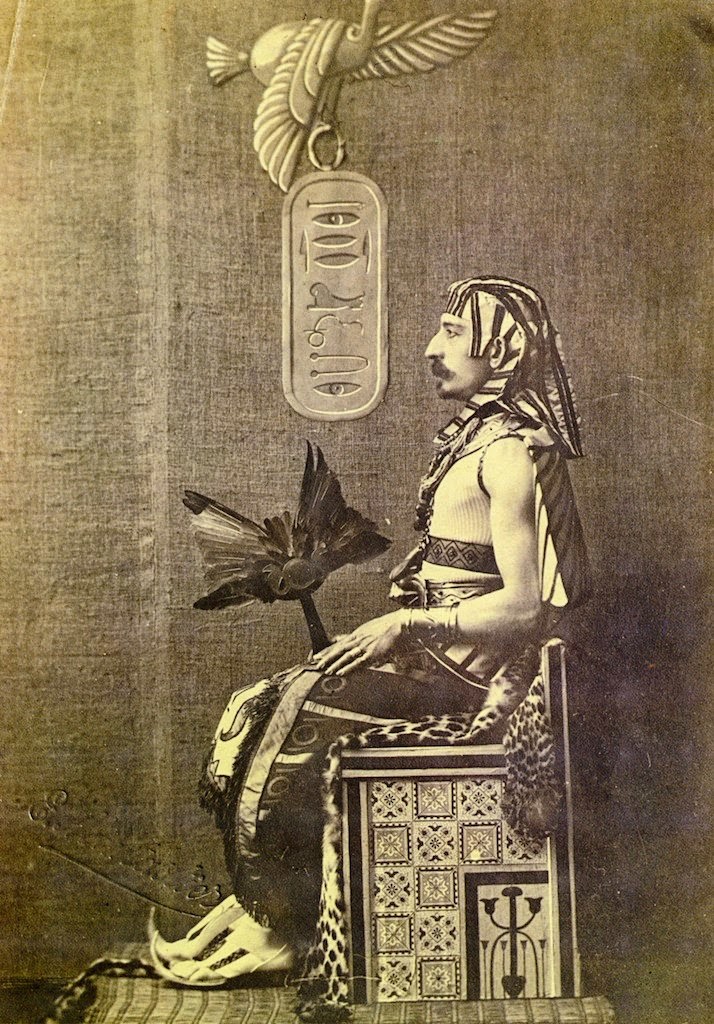 This is French novelist, and naval officer Pierre Loti.  He was a highly decorated officer, and a prolific writer. This image of him tricked out as Osiris for a costume ball.  What strikes me here is how surprisingly accurate his costume is considering the times.  Really, only the upturned shoes and his moustache and imperial are the mistakes. No doubt the textiles are wrong, but the overall impression is very good indeed.  He clearly had it custom done by someone with a great deal of skill, and a critical eye or details.   I miss costume balls.  Lets make them really come back! 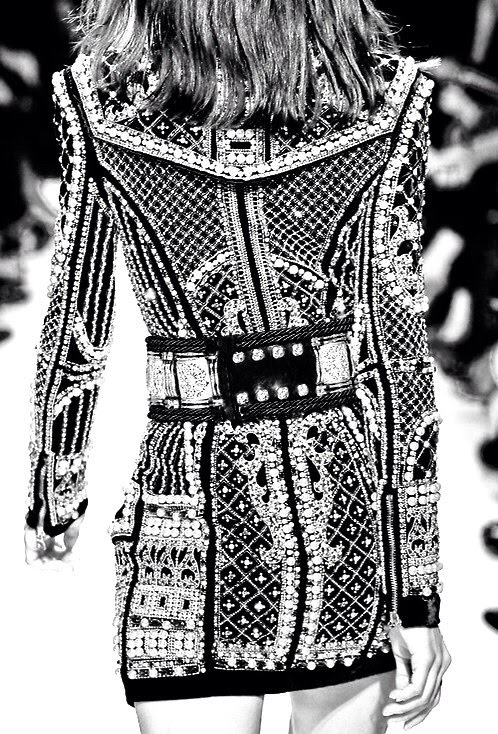 I could wish this image wasn't so crazily Hi-Rez, but I'll forgive it since the detail of this amazing piece of bead craft leaps out at you.  As a garment with wearability, it has an extremely narrow focus, and potential lifespan.  But as an achievement in the craft of bead embellishment, its a serious winner.
The beadwork for most of this was likely done lunette style, with the beads pre-strung and chain stitched into place for speed of work.  The lower back portion, where you'd sit, would have been done le main style, with each bead being sewn in individually, so it would have greater structural integrity, and be able to bear the stress of being sat on.  What that means in terms of production is that the lower back section could've taken as long to do as the entire rest of the piece. 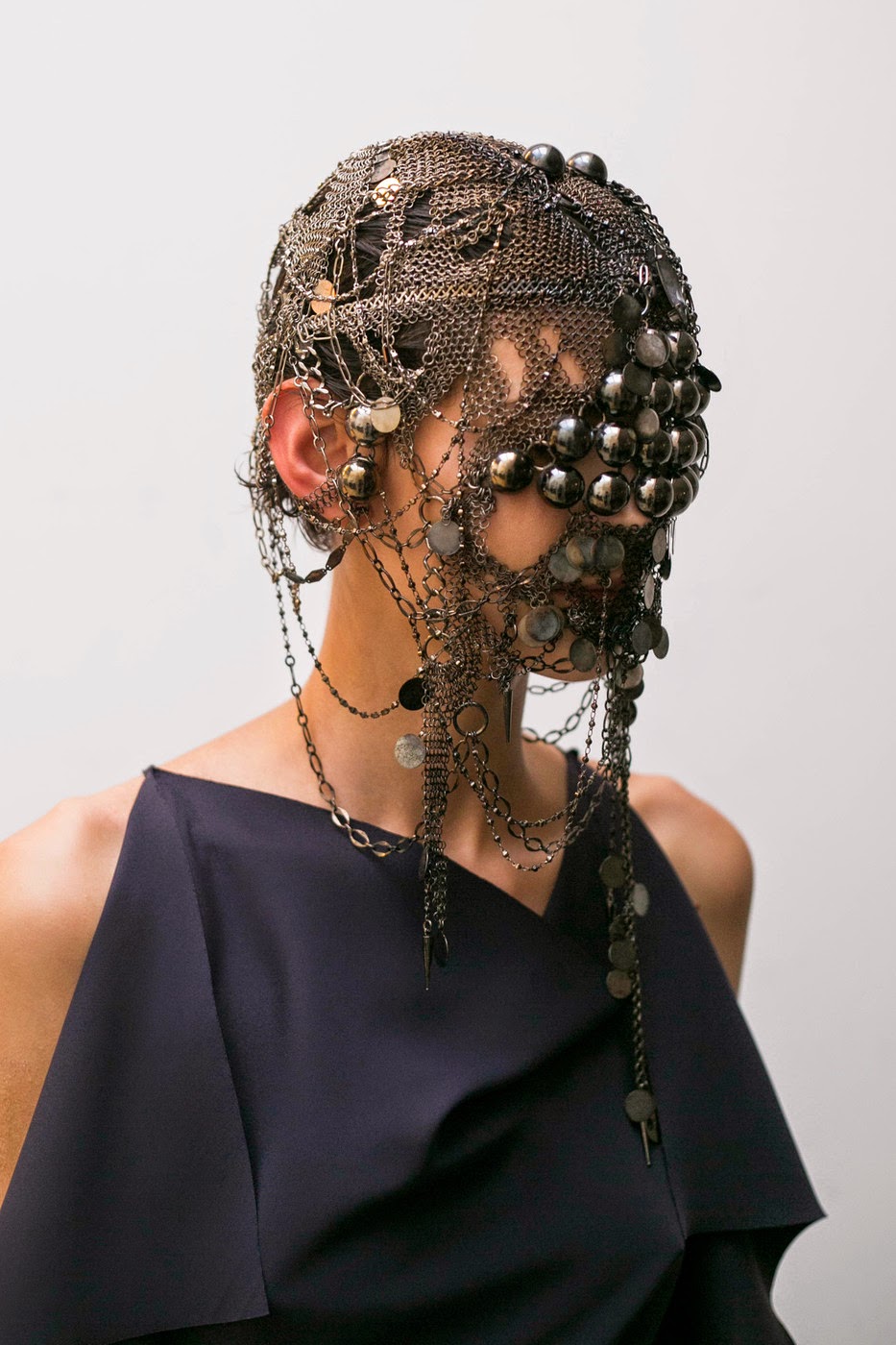 Sometimes runway styling puzzles me exceedingly. And sometimes, though I realize its not meant to be something for the real world, its so interesting looking that I have to appreciate it anyway, no matter how out there.  This strange, rather fetishy chainmail hood/mask was used by A F Vandervorst for the S/S 2014 collection show. Its such a number of things all at once its hard to suss them all out.  Chainmail says war craft and aggression, but the rows of discs over the mouth, and the swags of chains recall various cultures se of such things as badges of ownership of women.  Then there are those half dome pieces covering the eyes, which give the whole thing a vaguely insectile look and feel.  As I said, a fascinating, complicated piece of business.  Do you see more than I do? 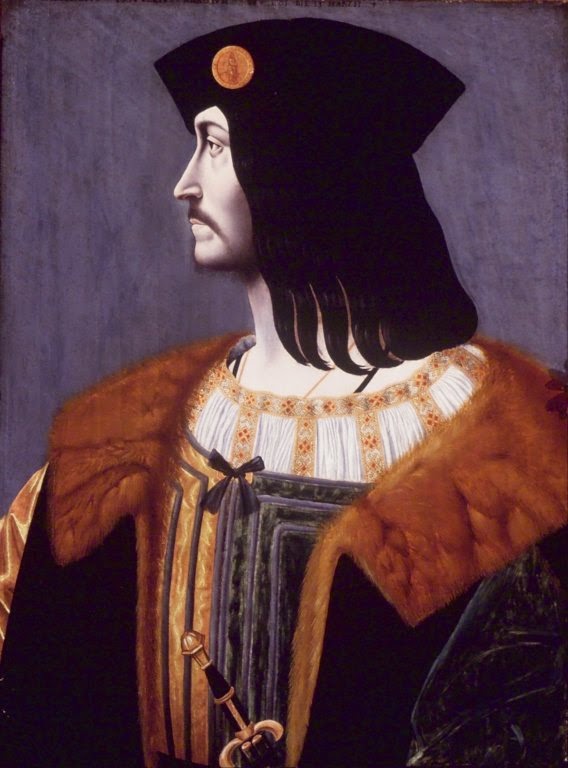 I've mentioned many times how much I appreciate those bridge points between two significant styles.  This portrait by Bernardino de Conti of Catellano Trivulio was painted in 1505. What brought it to my attention is the intersection of two looks.  First we have the Renaissance fashion for parti-coloring, where one side of a garment would be a different color from the other. It was the apparel version of heraldry, allowing people to proclaim their connections to family or a great house by so doing. Here, Trivulio is painted wearing a parti-colored doublet, but his hat and coat are of the newer fashions which will soon morph into that menswear style we associate with Henry VIII. 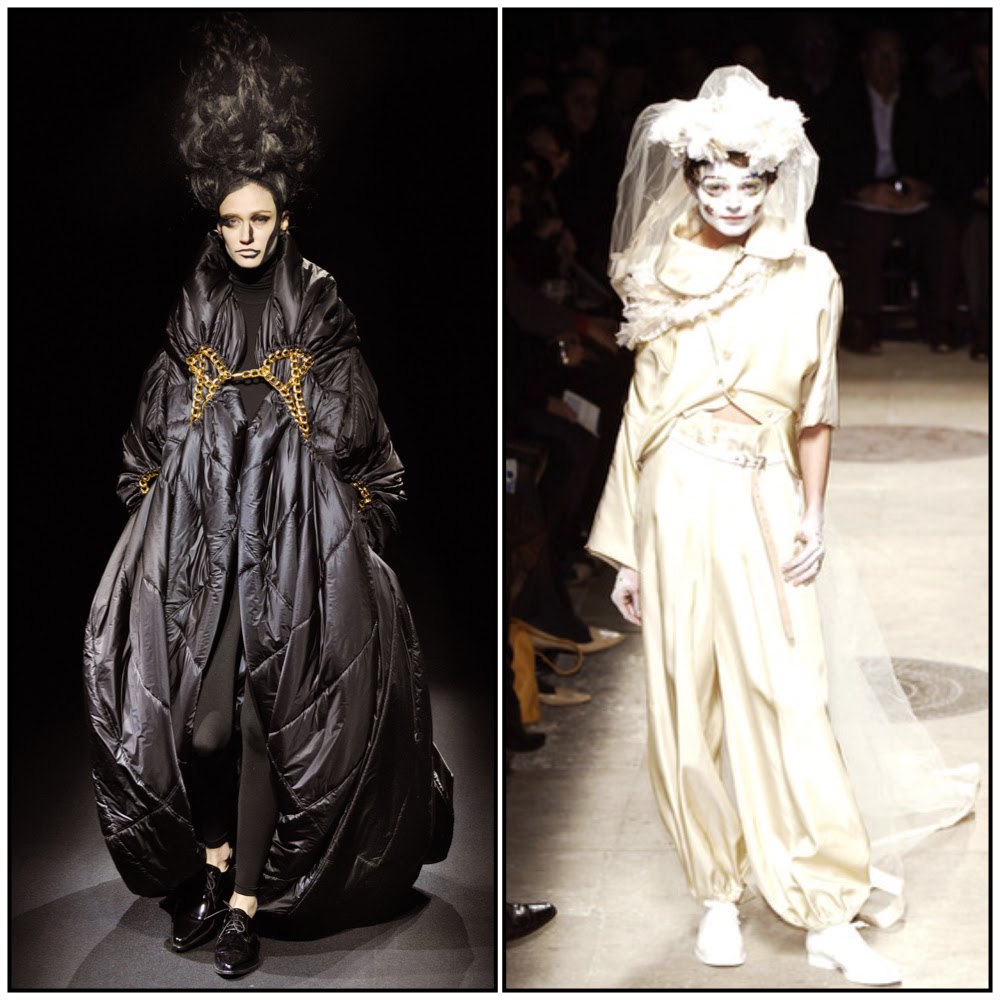 Meanwhile, back at Comme des Garcons,...
These two looks are deliberate in the frightening aspect. They fully intend to shock, and slap us in the face.  These two runway looks are meant to be nothing other than a flat out challenge to all our conventions. As such I applaud them both.  And I actually really love the black one. The shape and proportions I find very appealing. There is something murky and romantic about it that grabs me. 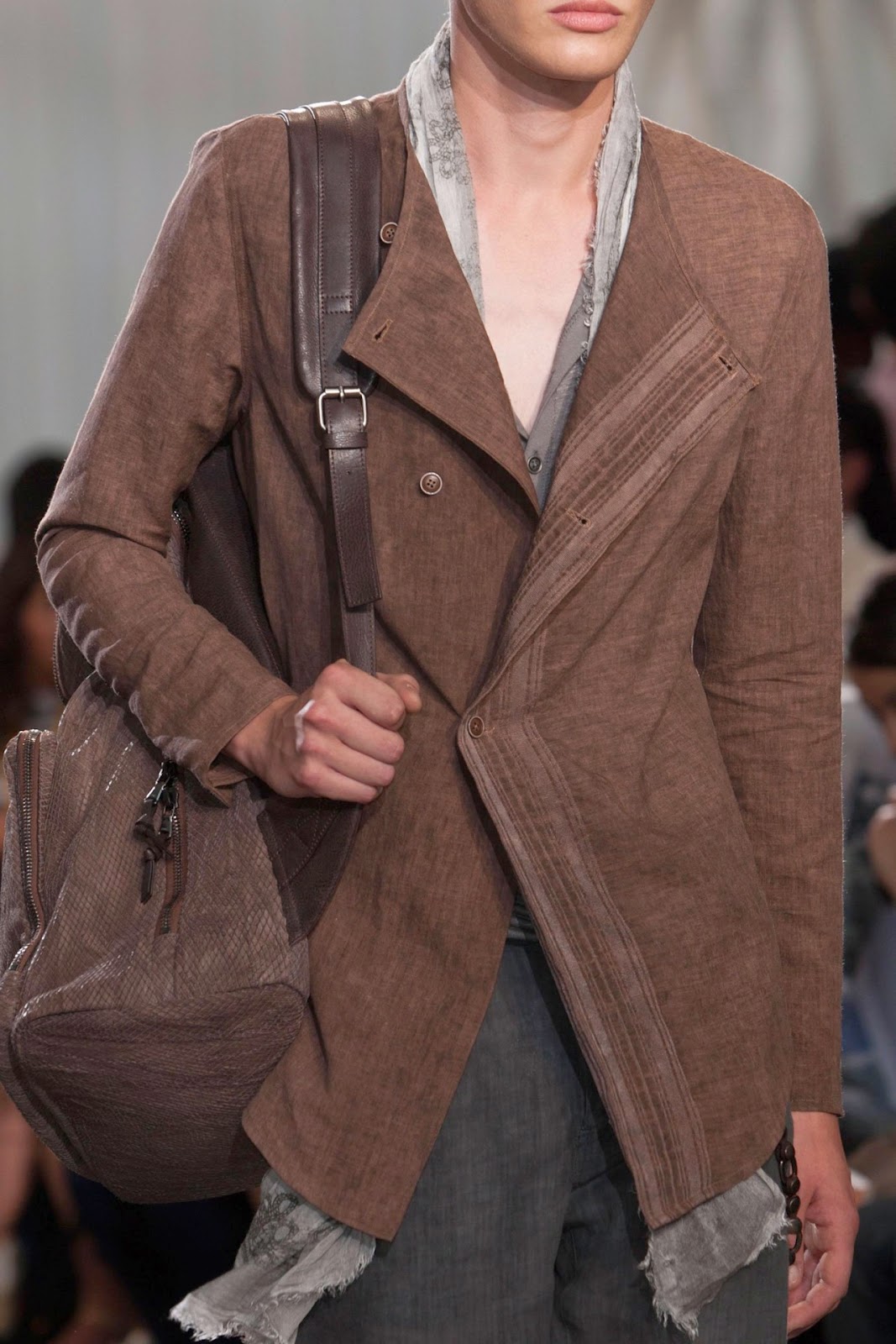 This detail shot is of a John Varvatos menswear look from his S/S2014 Milan collection.  I've written before about the slow, steady erosion of menswear traditions. How more and more designers are breaking away from established rules of fabric, color, tailoring and shape to create new Attire words that will allow modern men to express themselves more effectively.  I really like the softer structure of this jacket, and the subtle but very effective detail on the one lapel.  Its an easier, more relaxed concept of a suiting jacket.  Me likey. And I think it speaks to how more and more men are choosing to live and work. 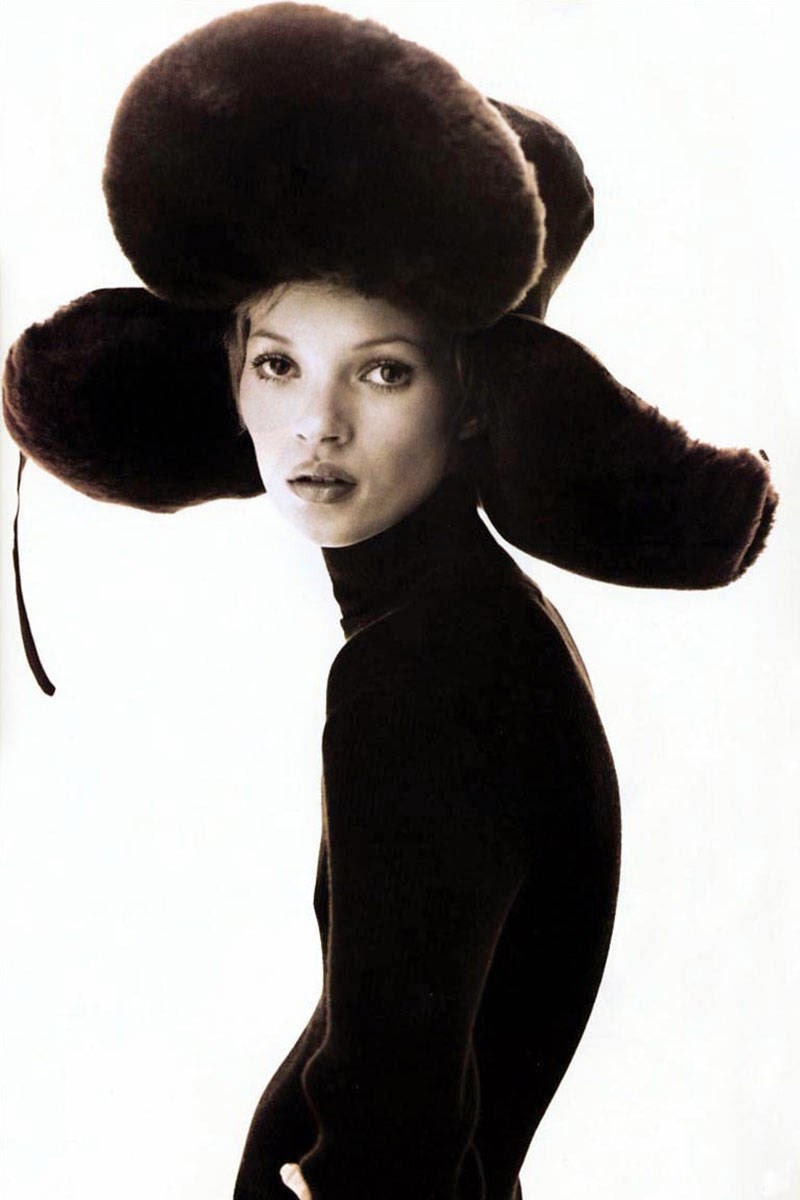 As a final note for this extra Scatter, this crazy hat.  We've all seen, and many of us have worn, those winter hats with the ear flaps and the front flap that turns up.  They became quite popular again recently.  But here, the concept has been filled with so much helium its about to float away.  Scale can and does help define how we respond to a garment, and in this case the alteration of scale is so great that it literally becomes something else entirely.  Sure, we see its beginning point, but what we end up with relates more to a modern sculpture you'd see in a garden or public space, than to a hunting cap.  There is also a comic aspect that is intentional and sly.  Which I love.

So, I hope you enjoyed your extra dollop of Scatter-ness today.
Have a Grand Day!
Posted by Paul G. Ellis at 4:55 AM