Coming up fast on the big blow out known as Christmas.  I hope those of you who involve yourselves are staying sane and happy through all the potential stresses.  Me?  Doing fine here, getting things together for my annual open house.
But, enough of that, its Scattertime Kiddies! 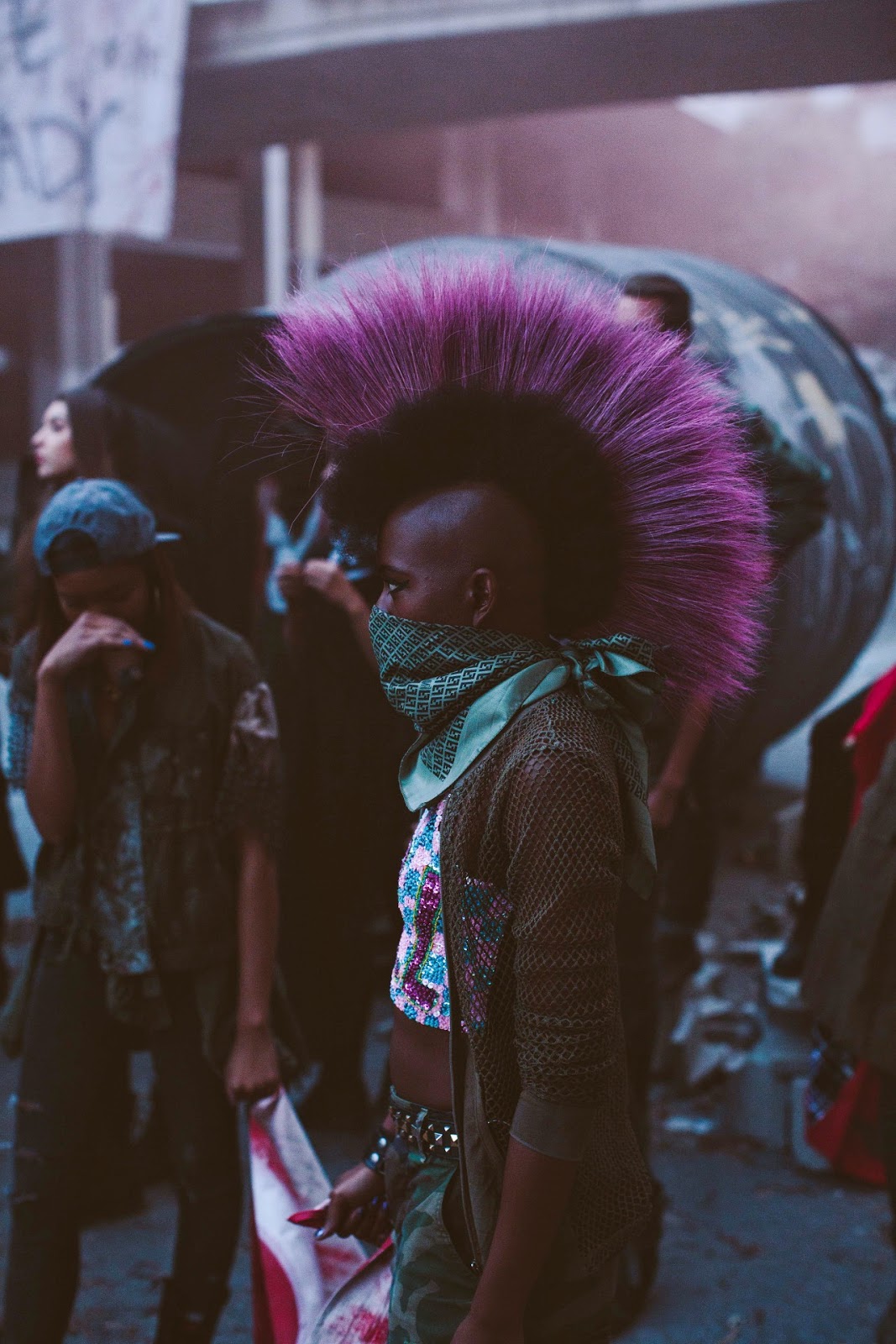 I just couldn't stop looking at this image.  The colors, proportions, the variance of texture, and shape. All of it contributes to a statement that is arresting looking, and demands our attention, even though we are being told in many ways to keep our distance.  The violently orchid colored mohawk and the bandana over the face both say stay away.  Meanwhile the bared midriff is strangely provocative.  So we get a hint of encouragement along with the dismissal.  Its a look with a great deal on its mind to express.  I love it. 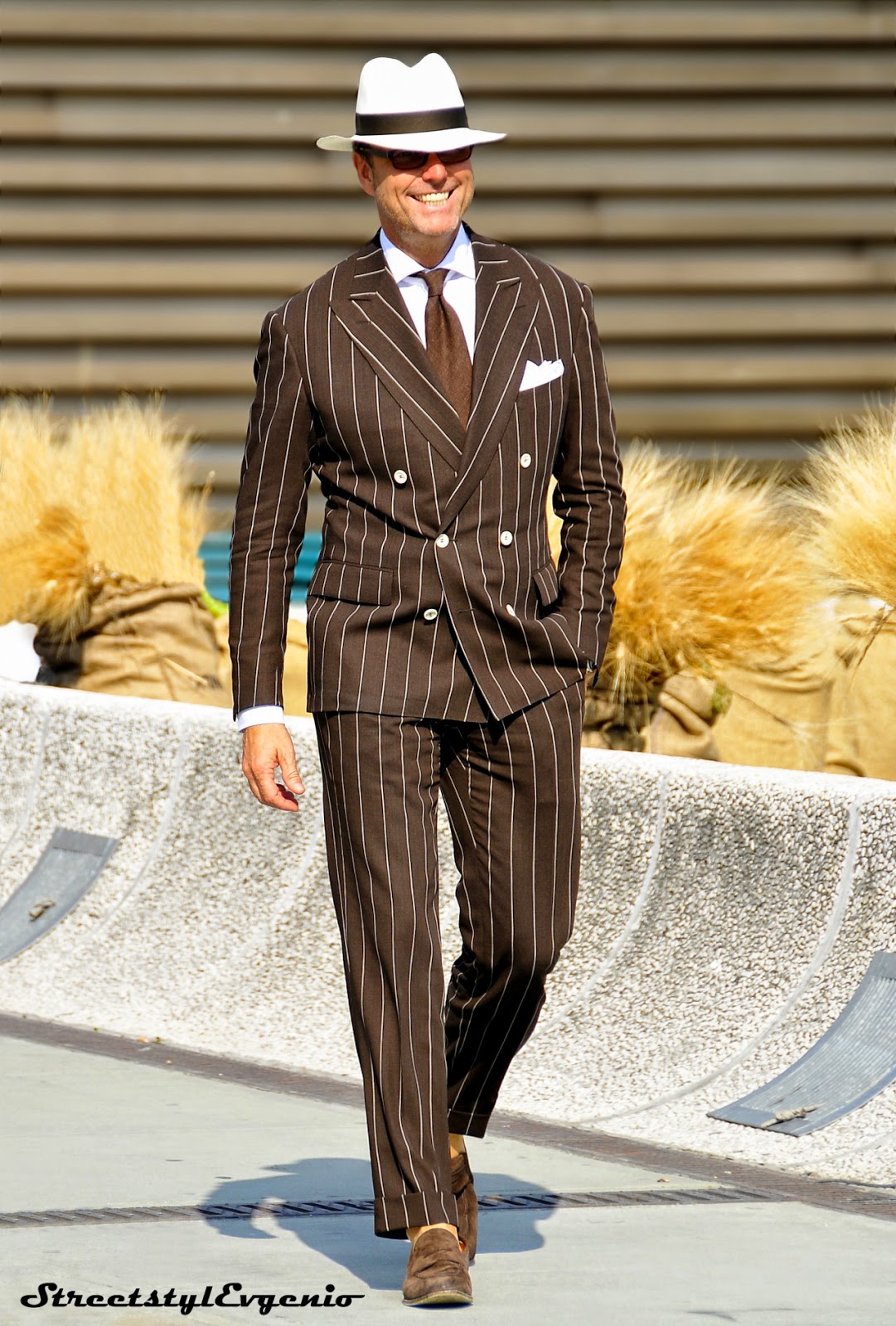 30s Hollywood gangster, updated beautifully.  This broad spaced pinstripe suit is a terrific look, and he's accessorized it very well.  Sure, there are a few fit problems, but unless you can afford custom tailoring, there always will be.  Over all, I think its a marvelous re-do of a classic cinema trope.  Bravo, mister. 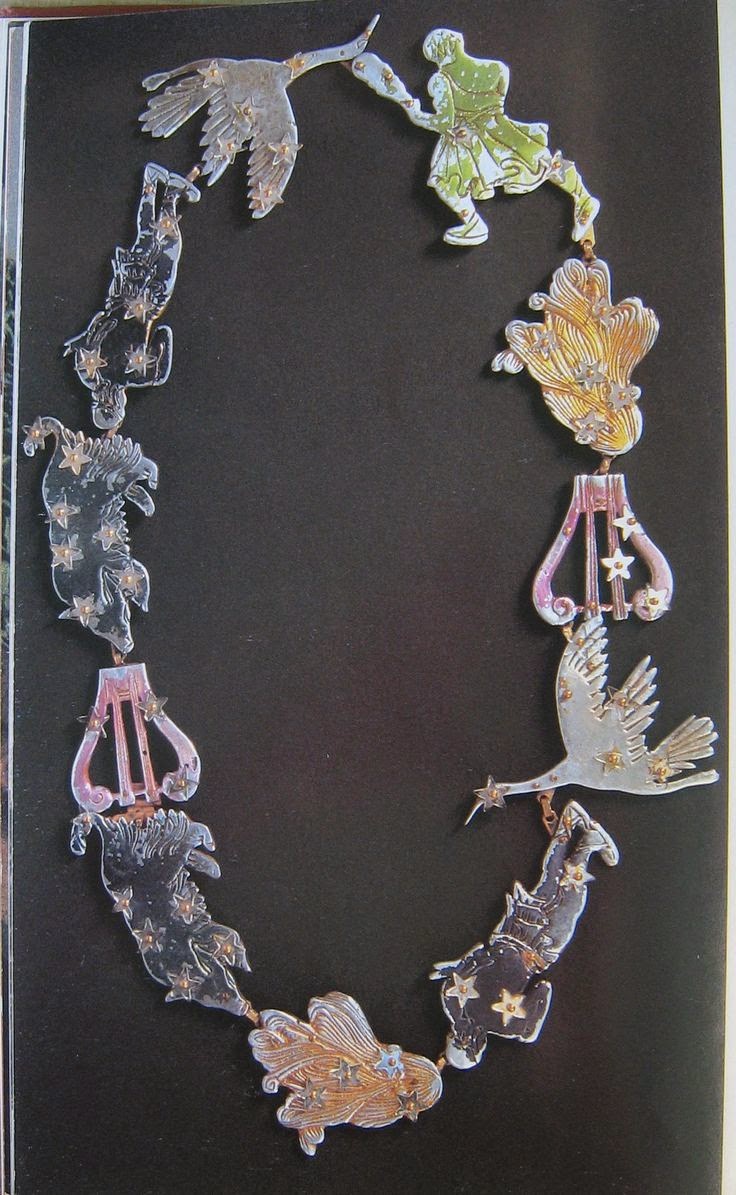 In 1938, Else Schaiparelli produced one of her most remembered collection, her Zodiac collection.  This bakelite necklace is from that collection.  It bears the touch of humor and lyricism that is seldom absent from her work, and the design of the individual pieces was done in collaboration with Jean Cocteau, with whom she worked many times.  It can't be terribly comfortable to wear, with all those rigid irregular shapes, but sometimes one must suffer for one's art, mustn't one? 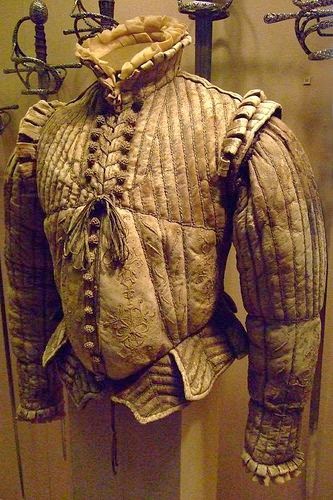 This man's doublet is from France and was made in 1580.  Its unique in multiple respects. One is that its entirely of suede that has been embroidered. The second point of interest is that its heavily padded all over. Third is the attached suede neck ruff. And finally, the garment's purpose is of note. This doublet was meant to be worn while fencing.  That explains the padding, the textile, and the attached ruff.  Plus, this thing is just damned beautiful.  Oh, and they even included the very stylish peascod belly front to this doublet, so whoever was fencing with this fellow would know just how on point he was.  Sorry, couldn't help myself. 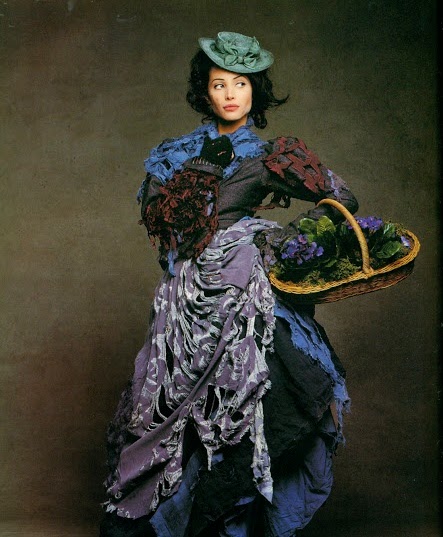 Sometimes fashion photography draws from theater and literature for its inspirations.  This image from Vogue UK in 1992 features Christy Turlington as shot by Patrick Demarchelier, clearly taking its point from Eliza Dolittle in My Fair Lady.  An image of this sort is meant far less to display clothing being suggested for wear than it is meant to set a mood and establish a set of fantasies.  In this case the Pygmalion notion of a person's ability to be transformed.  All that said, I love this image for its subtle cheekiness. 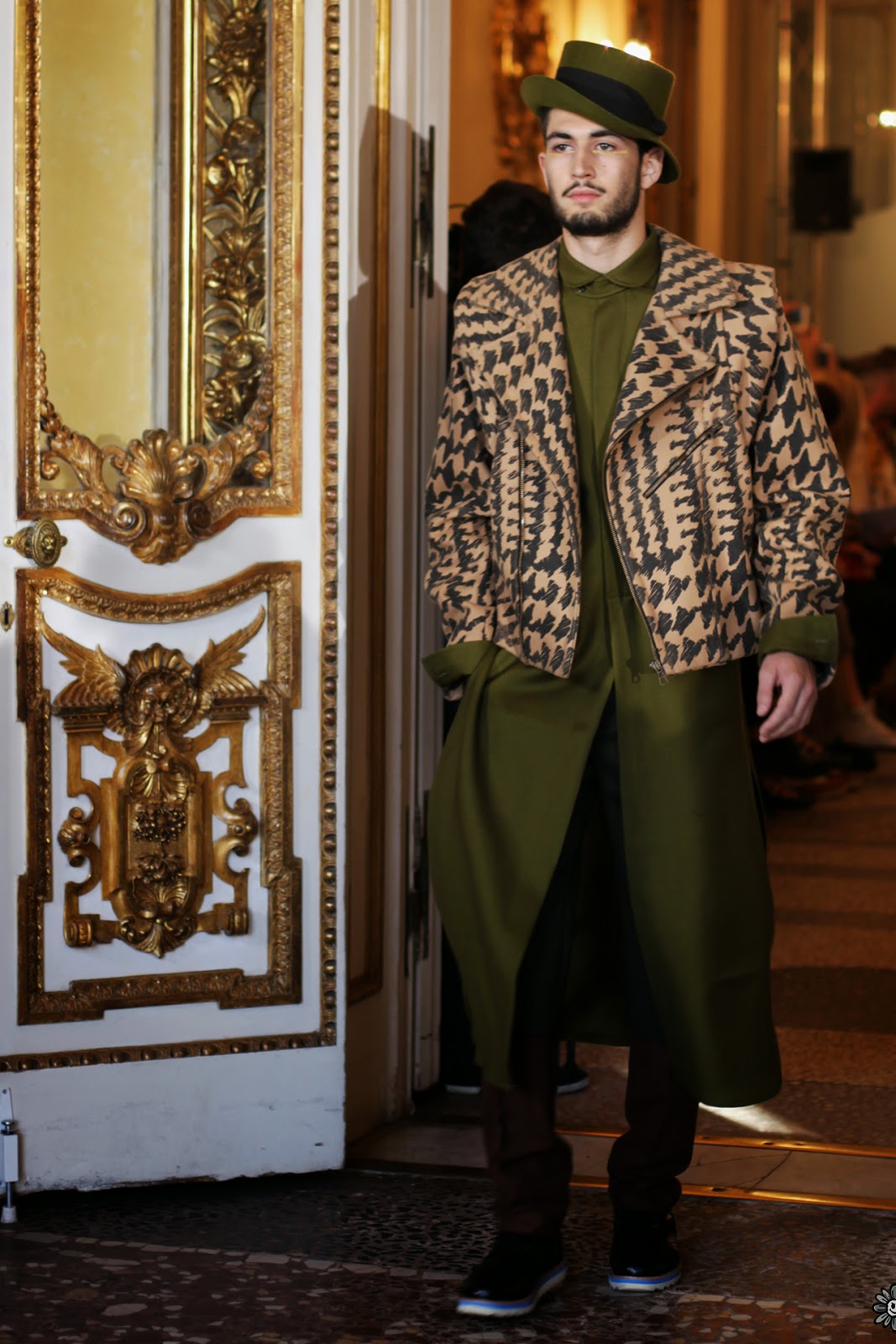 You know me and my seeming relentless going on about the break up of menswear traditions.  Here's another effort that attempts to step outside that box.  Do I think this succeeds entirely. No, i don't the proportions are odd.  The clothes all look just a tiny bit too big for the model, but not over-sized enough to look deliberately so.  I like the tunic piece, but I wish the trousers under it ended sharply rather than bunching at the ankle.  The sleeve length on the houndstooth jacket is a bit too long; again, not long enough to look intentional.  Its an interesting concept, and it nearly works for me, just not completely.  Cleaned up I could easily see a look of this sort making its way into the Attire dialog. 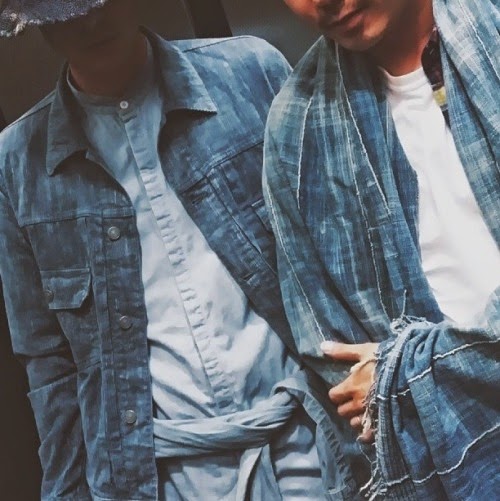 Serge de Nimes is the original name for denim.  Made first in Nimes, France, and dyed with indigo, it was meant as hard wearing material for working people.  It is still one of the most widely used fabrics in production, with garments of every description being made of it.  Most of us know that it came first into wide usage when Levi Strauss in the 1800s started using it to make blue jeans, but since that time it ha gained ever widening usage, becoming one of the primary materials from which the Attire language gets constructed. 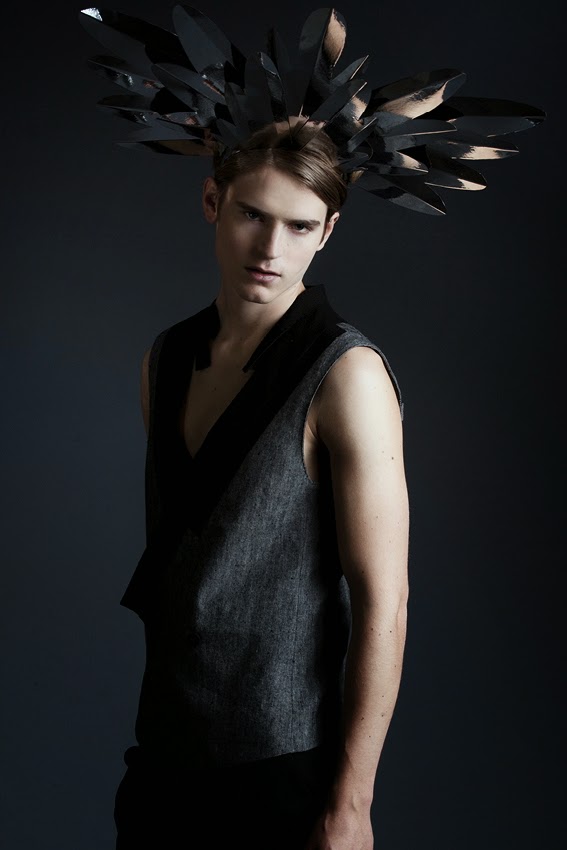 These was something about this image that drew me back to it repeatedly, so much so that I had to share it to you all.  That feather crown/headdress/hat is poetic in its expression.  Sure, its unlikely to see an real world usage any time soon, but as a visual point maker, a way of drawing the viewer to the face, its a wonderful tool.  I honestly can't tell whether those are feathers in use or some other thing shaped in a feather-like way. And in a sense that only adds to its appeal for me. I want to know,a nd the mystery hooks me in. 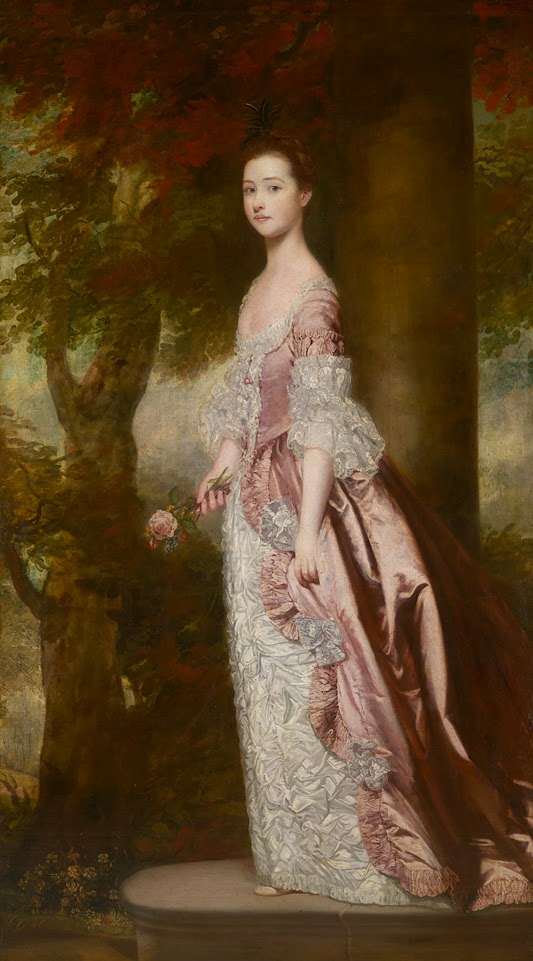 Next up, this portrait by Sir Joshua Reynolds of Miss Susanna Gale painted in 1763-4.  This painting interests me because, yet again, we are in one of those transitional phases between pronounced looks.  We have lost rigidity of the prior decades, and the clothing has softened.  The main elements that will dominate women's clothing for the next 35 years are all present.  the half length sleeves, ending in cuffs, with lace. the low square neckline, the stomacher, the center front opening to the gown and the highly decorated petticoat.  All that will happen from this point will be variations on these pieces size and decoration, until the Revolution in France changes everything. 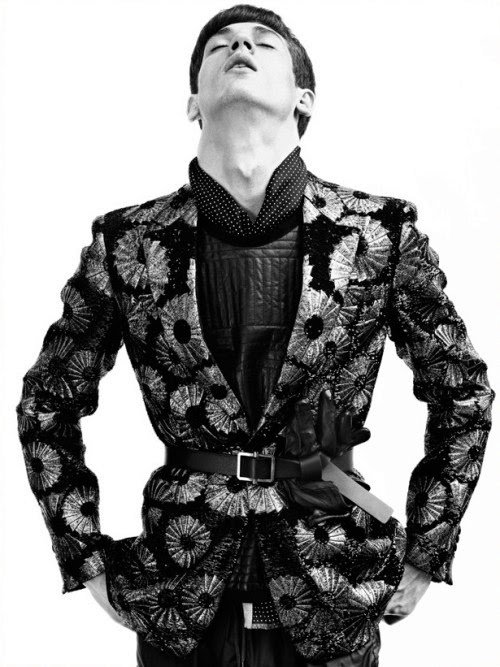 For the gent with tons of moxie, might I suggest this Chinese metallic brocade jacket?  I am not sold on the quilted vest under it, but paired with the right things this could be Liberace fabulous.  What would you wear it with?  Cummon, now, you know you wanna try it on. 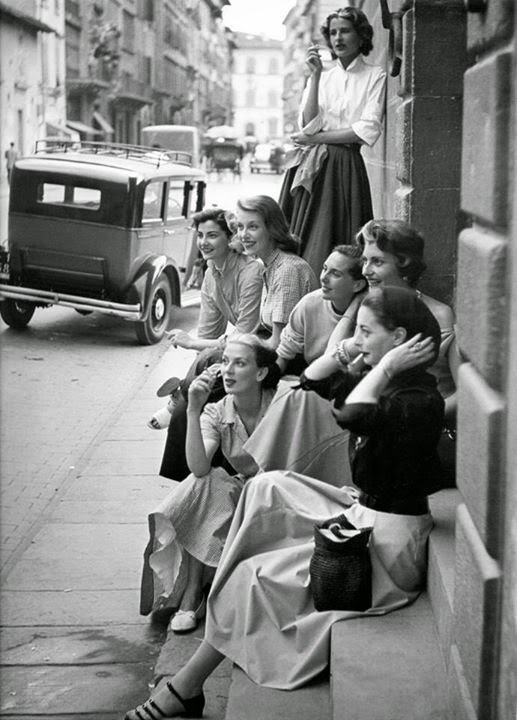 This casual shot was taken by fashion and celebrity photographer Milton Greene, just post war, and its marvelous for how it shows working women, and how they really dressed to do their jobs.  The clean simplicity of their clothing, and the no nonsense feel to all of it tells you that these are women with things to do.  I'm dying to know what they're all responding to. 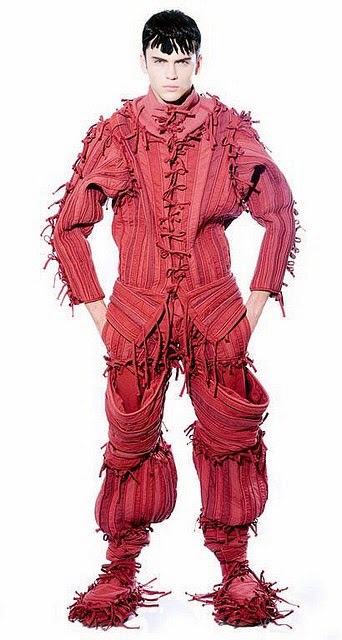 And to finish out our scatter for this week, something deeply strange, hard to fathom, and really pretty wackadoo.  Rosalb De Mura sent this down the runway in 2010.  Its rare for me to say this, but even I am having trouble finding anything of worth in this effort.  Sure its edgy as hell, and clearly falls in the arena of the avant garde.  I can even see where some of the inspiration points come from. the tied on sleeves, are taken from the Renaissance fashion for detachable sleeves.  In fact, the repeated use of ties harks back to that period entirely.  And those booties/shoes?  I know they are meant as runway styling.  Can you imagine trying to walk safely in those?  How often would you trip yourself up on your own laces?  Sometimes even I have to shake my head and say, "whatever, dude".

That's it for this week, my friends. Have an awesome weekend!