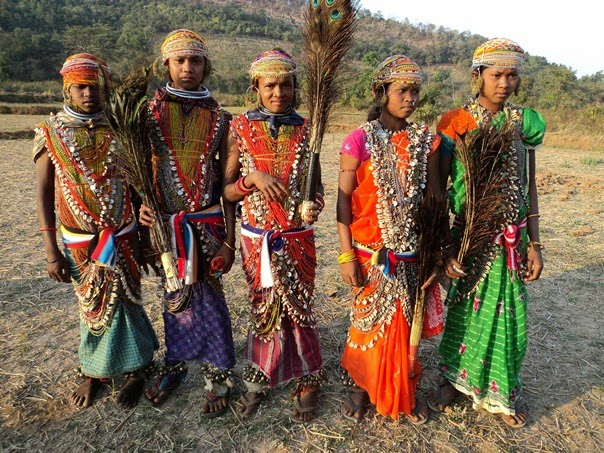 First up, this image.  These are traditional clothes for people of Chile of the Los Lagos and Los Rios regions of the country.  I was struck by the relative lack of differentiation between the sexes, and the fantastical use of color and adornment that they display.  Such a subset of the language of Attire really should get  more broadly spoken. This is magnificent.  As usual, I am awestruck by the endless variety, and creativity of human persons. 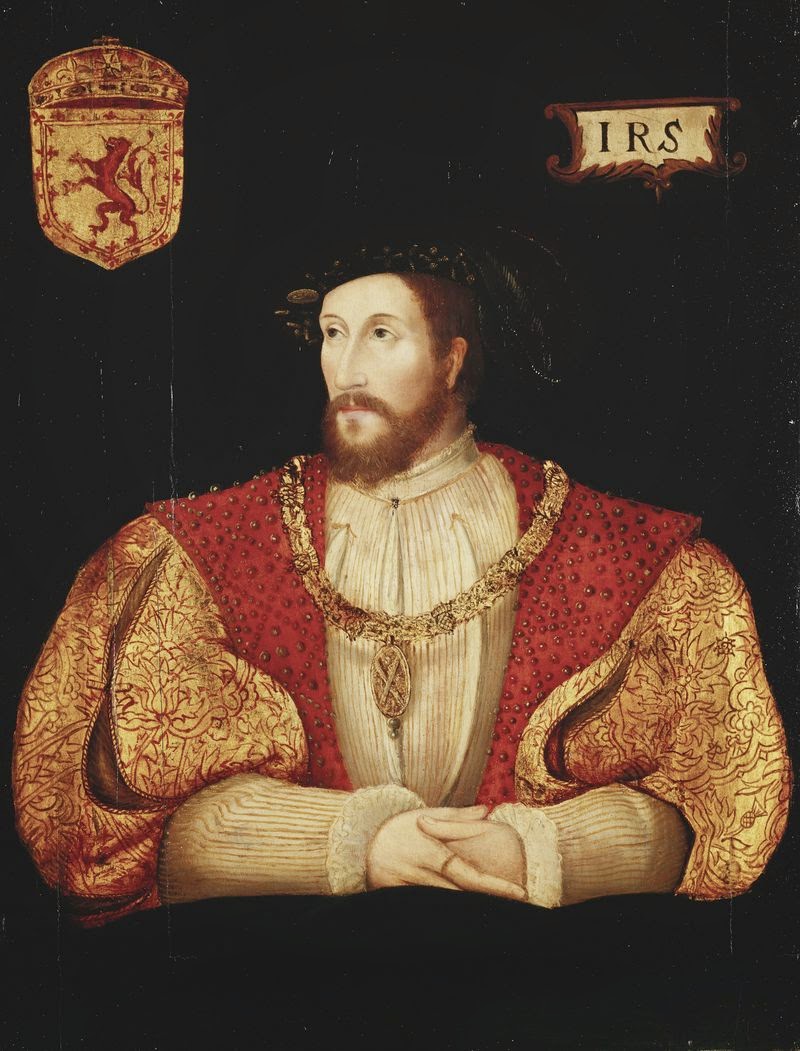 This is a portrait of James V of Scotland, painted around 1540.  Its interesting to me because, since Scotland was never a vastly wealthy nation, even her kings could not define themselves with too much visual panoply.  James V, here presented, could by his dress. be a noble born person of most places in Europe at the time, but does his apparel define him as King of Scotland by just seeing him? Not really.  Were he in the court of his southern neighbor, Henry, he would be seen as one of many well togged courtiers, nothing more.  I don't mean to belittle him as a monarch or as a member of the Scottish people, only to use this as an example of how well Attire communicates, without words.

Our desire to make ourselves unique knows no limits. We will do all we can, all we may, to reach that end point, where we are without copy.  These jeans, prosaic garment that they are, are loaded to bear with layers and piles of patches, each one adding to the sum total of what is conveyed to the observant viewer.  Nothing wrong whatever with giving those who see us a glimpse of our own complexities.  In fact, I think its rather a good idea. 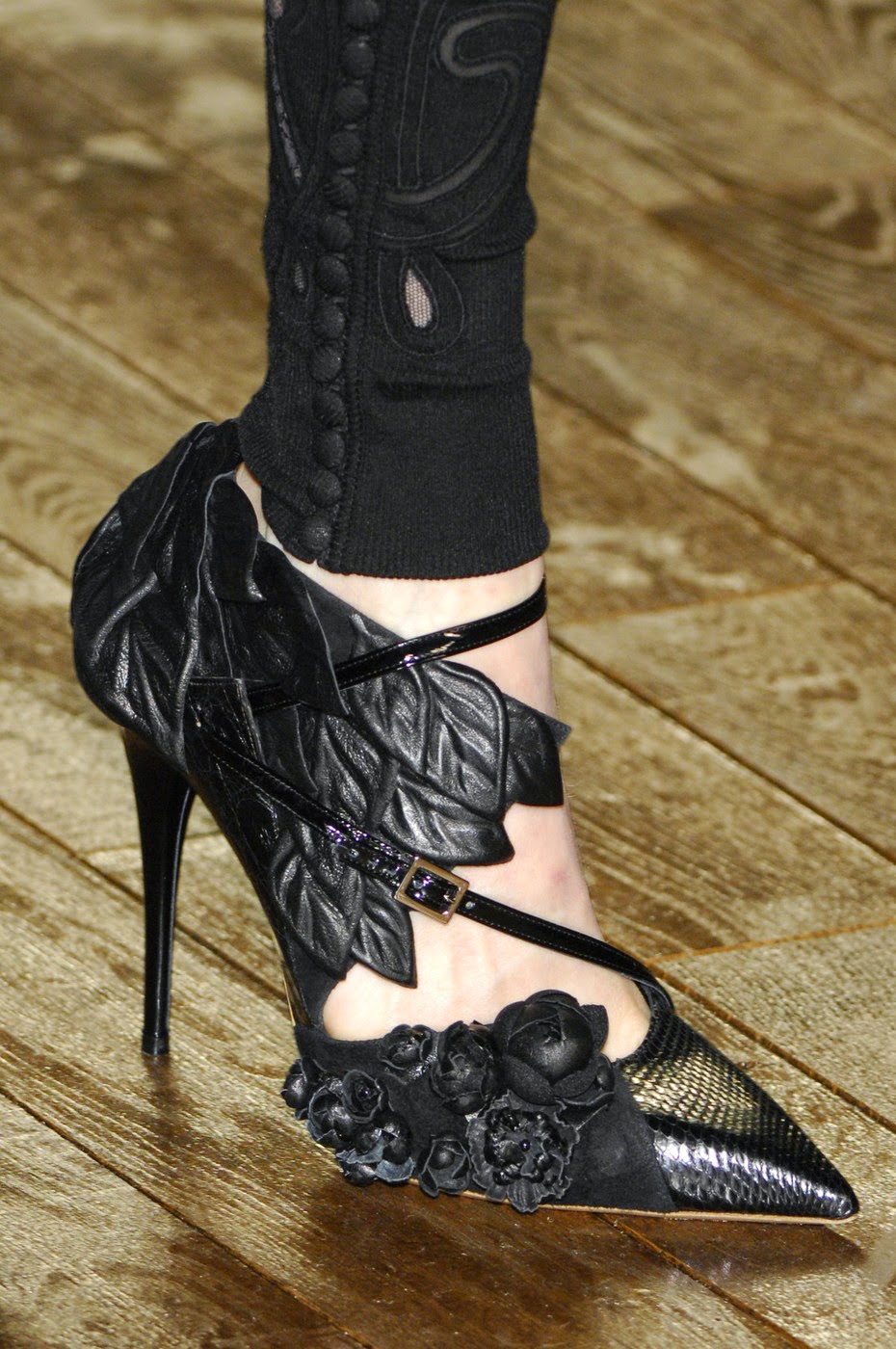 These shoes were on the runway for Chloe in 2008.  They spoke to me. Why?  Because, apart from their lack of comfort, and insistent placement of women in a sexual role, there is something darker, denser, and more troubled looking about the final look of these.  The black leather leaf appliques, and the floral forms near the toe look less like organic forms that are pleasant, and more like some kind of unsavory growth, taking over.  I know that in the world of accessories no single thing gets more attention, or creates more variety than shoes for women.  These, honestly, disturb me, and not just because of the crazy high spikes. 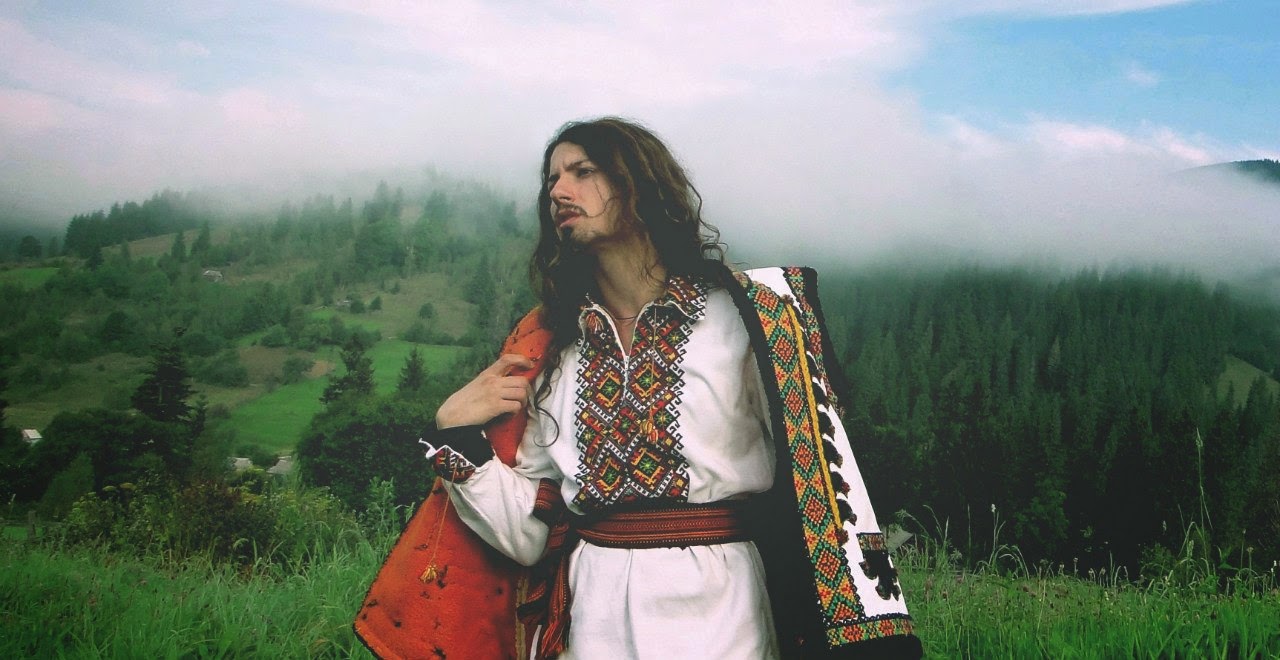 I don't honestly know if this young man is really a part of the ethnicity he is presenting, whatever it is.  But the fact remains that in these clothes he is fully embodying the spirit of the spirit of the garments and accessories he has on.  What does that mean for the rest of us?  It means that all of the world's cultures are there for us to glean from if we wish. We need only approach them with respect and understanding to make them work for us. 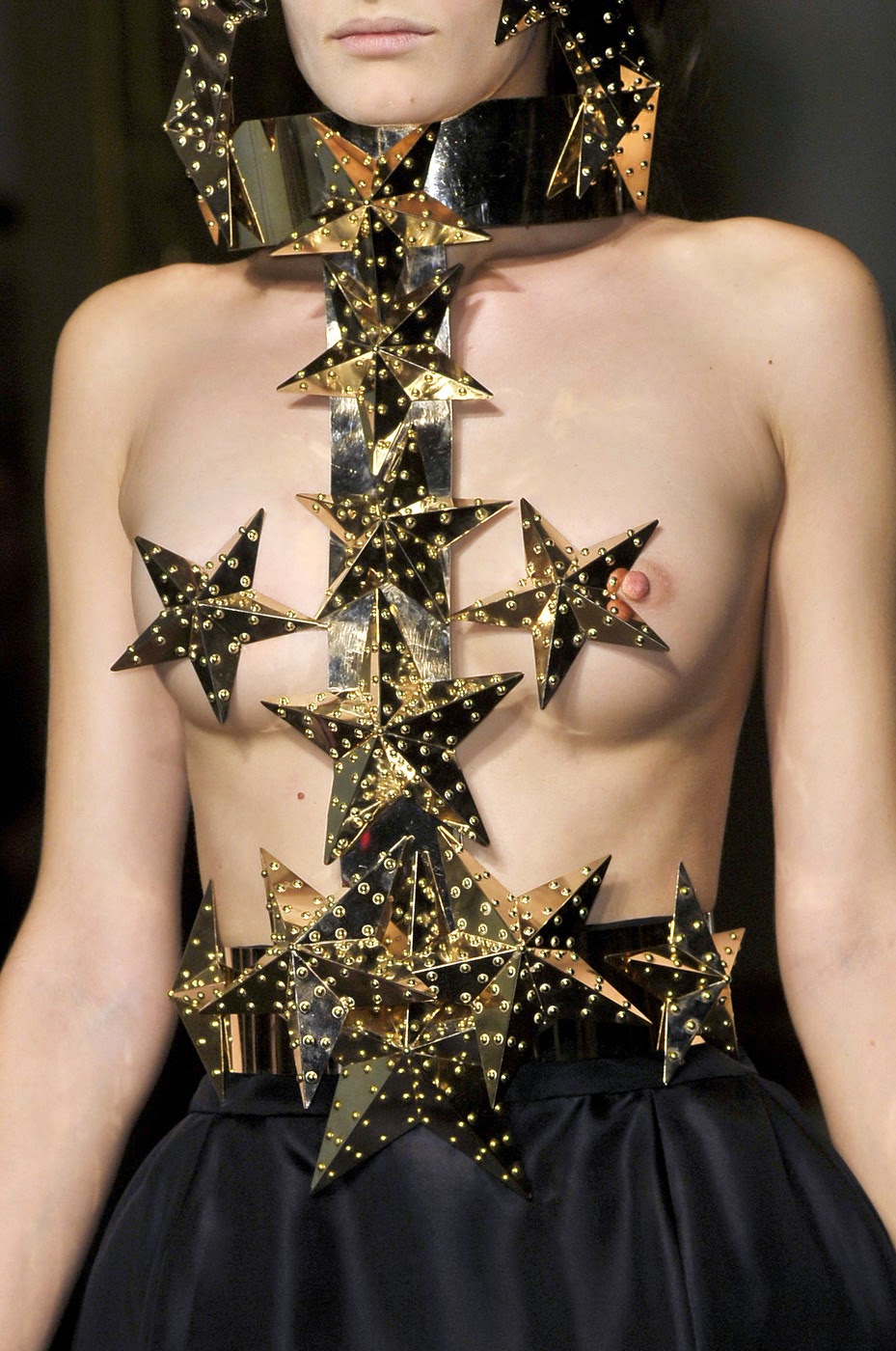 In 2010 Francesco Scognamilglio presented this runway look to the public. Daring? Sure. Avant Garde?  Without doubt. Utterly unwearable?  Certainly.  I present this because not all experiments result in success.  This is one of those times.  Sure, its an intriguing image, but its relevance in the Attire language is seriously limited.  It won't become a spoken word.  And by the way? OUCH!

This remarkable portrait is of Mary of Modena when she was Duchess of York to James, Duke of York.  It was in 1675.  What makes this essentially equestrian portrait unusual and worthy of commentary is that her apparel is entirely indistinguishable from that of a man.  Even her hairdress is completely male given the styles of the times. The concept of gender fluidity is not a new one by any means, but that it was presented in a permanent form in such a way as this is remarkable.  I want her waistcoat.  And she looks ravishing. 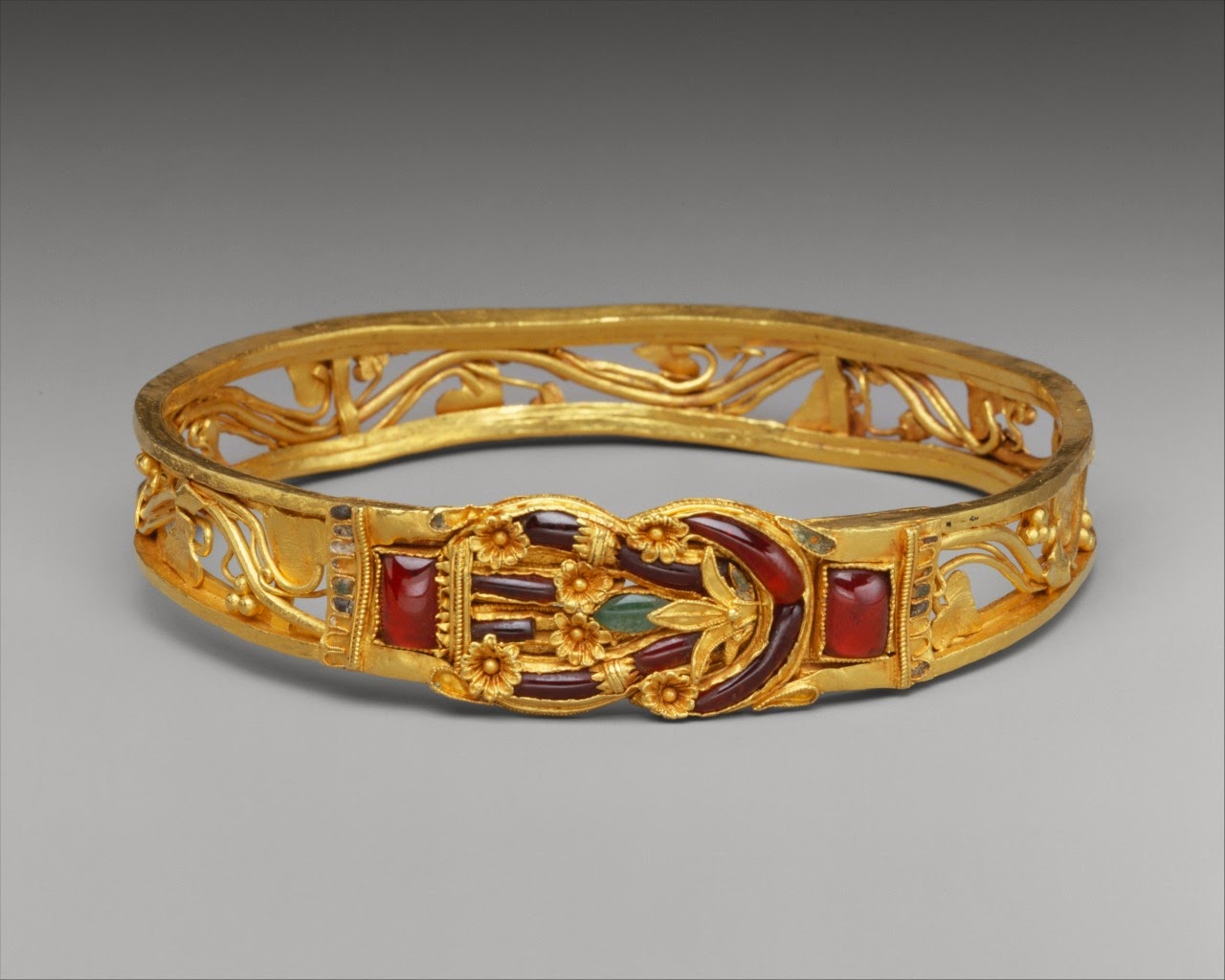 This armband is from the Hellenistic Greek period of the 3rd to 2nd centuries BC.  Made in gold with garnets, emeralds and enamel, it is 3. 5 inches in diameter and is a wonderful example of the level of artistry available to the folk of the time.  Just look at the detail of those tiny flowers.  This is very fine work indeed; for any era.

Women get to wear some truly awesome shoes.  These 16th century shoes were meant to say one thing, and one thing only.  WEALTH.  The person who wore these fabulous shoes was a person who needed to do no work whatever. She. or even he, since the differentiation between footwear was a lot less clear in those times, was a person of position, style and influence.  Must've been damned uncomfortable though. Then again, how much time did they spend actually standing?

Two looks from Alexander McQueen's final show, his 2010 Spring/Summer collection.  Ever on the cutting edge of tech, McQueen used digitally printed textiles extensively in this collection. And he was one of the first to mirror them, creating a colorful Rorschach pattern.  But the right hand outfit intrigues me most, with its exploded view of the interior, where the plain, flat, bland fabric of the outer, gives way to the marvelously colored interior. 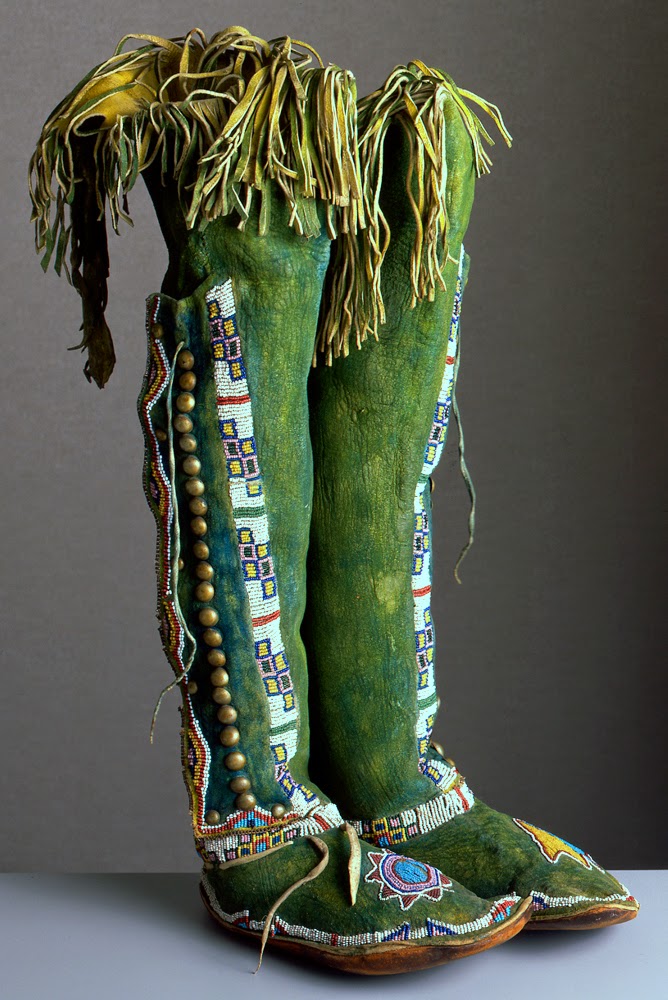 I am routinely set back on my heels by the fantastical skills and artistic achievements of peoples we, as Western culture folk, tend to think of as somehow lesser.  They aren't. Not by any measure.  Take a look at these knee high green suede moccasins.  These wonderful things come from the Kiowa people.  Migrating from Montana, to Colorado, and then to the Plains, settling eventually in a reservation in Oklahoma the Kiowa are known for the fineness of their craftsmanship.  These moccasins stand as a testimonial to their skills, artistry and vision.  We more "cultured" folk, should look at these with humility.  Wonderful in every respect. 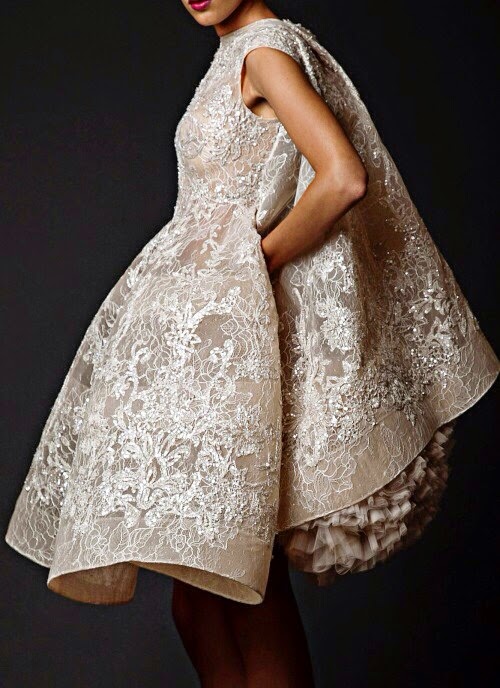 To close this scatter, this wonderful piece of couture from Krikor Jabotian.  Honestly, I don't have much to say here, beyond the fact that I think this is sublimely lovely, perfectly constructed, and more than a bit avant garde at the same time.  The shape of the dress seems to somehow avoid the lower half of the model's body.  By that I mean, the skirt seems not to be around her legs, but in front of them, and the ruffle filled shoulder train seems also to avoid the lower body. Of course the reality is otherwise, but the illusion is fascinating.

I hope you all had a splendid New Years celebration.  And I look forward to filling your year with more of this crazy wonderful stuff.