So its time, once more, to dig your hands into the jumble box of my brain, and take a look at what you get.  Let's get to it! 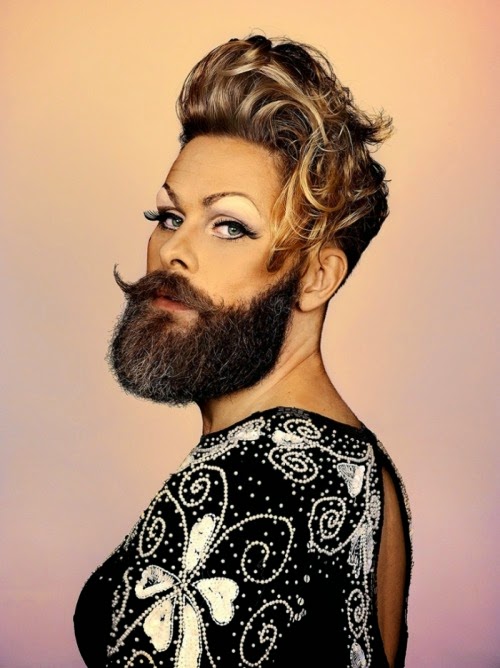 The concept of genderfuck is hardly a new one, but this image struck me.  The man here presented is gliding effortlessly back and forth across the arbitrary lines of gender identity, as our culture defines them.  When I see this, I'm struck that, without the eye make-up, and rather sedate beaded evening dress, we would have an image that would be considered significantly masculine. Add those two elements into the mix, and suddenly this undeniably male person, suddenly loses hold on their position in our brains.  Do I think that's a good thing?  Oh hells to the yeah, I do.  Besides, I think he's gorgeous, either way. 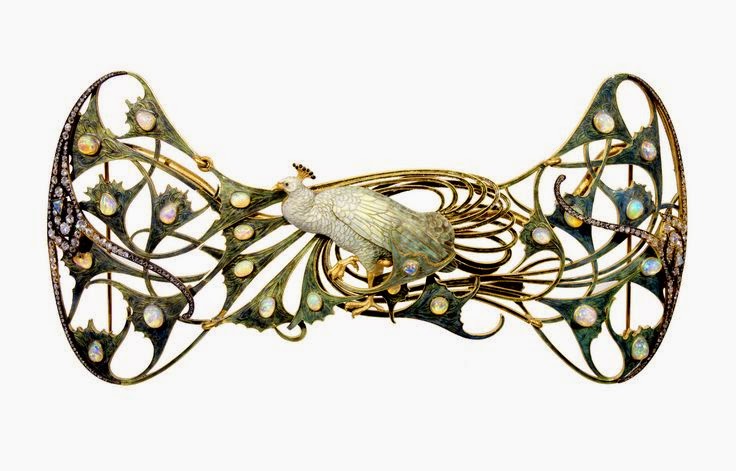 Few artists or designers understood the Art Nouveau aesthetic down to the bone like Rene' Lalique.  This pectoral brooch was designed about 1899, and is as perfect an example of what the movement embodied as anything I've ever seen.  The green enameled gold brooch is randomly scattered with opals, and the brooch is bracketed by curving sprays of diamonds.  I love that this has an overall symmetry, but that within the confines of the shape there is idealized natural form.  This is a stunning piece of work, and expresses a yearning that was felt at the time, for a return to more connection with the natural world. 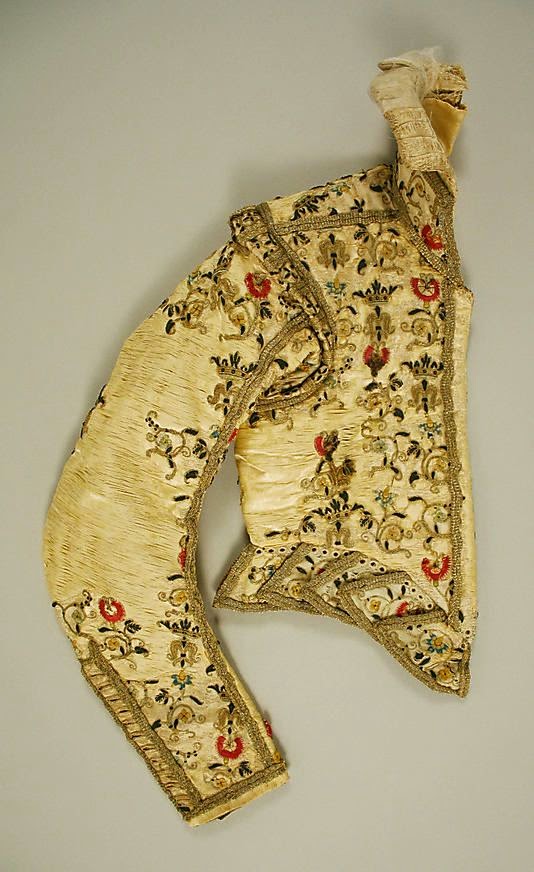 There are times when I yearn for other days. In this case its because the fashions of 1600 would have suited my frame right down to the ground, since I'm rather short waisted.  This doublet, of cream colored silk, has been both wonderfully embroidered with multicolored flowers, but every seam line has been trimmed with braid to cover stitching lines.  Its also interesting to me, since it shows how very differently sleeves were cut in that time.  In 1600, a sleeve was cut of two pieces, an inner, and an outer, with seams running down the center of the arm. Also, the sleeve was given a pronounced bend at the elbow, which afforded more range of motion, since they were cut so tightly. 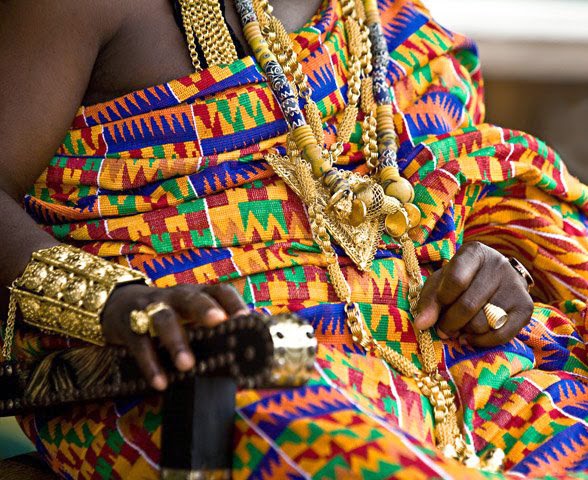 Our seemingly universal penchant for dazzlement never ceases to make me smile.  This image is so over the top, with that wildly intense patterned cloth, and the literal mounds of gold jewelry, that the eye doesn't quite know where to rest.  I think that, from a psychological perspective, that's one of the base parts of something being dazzling.  We cannot find a single element to focus on, since the whole is so complex.  The brilliant, multiple patterns in that textile keep our eyes in motion, and oddly, its a jewelry that ends up being the most restful place to look, though even there, there is a lot going on. 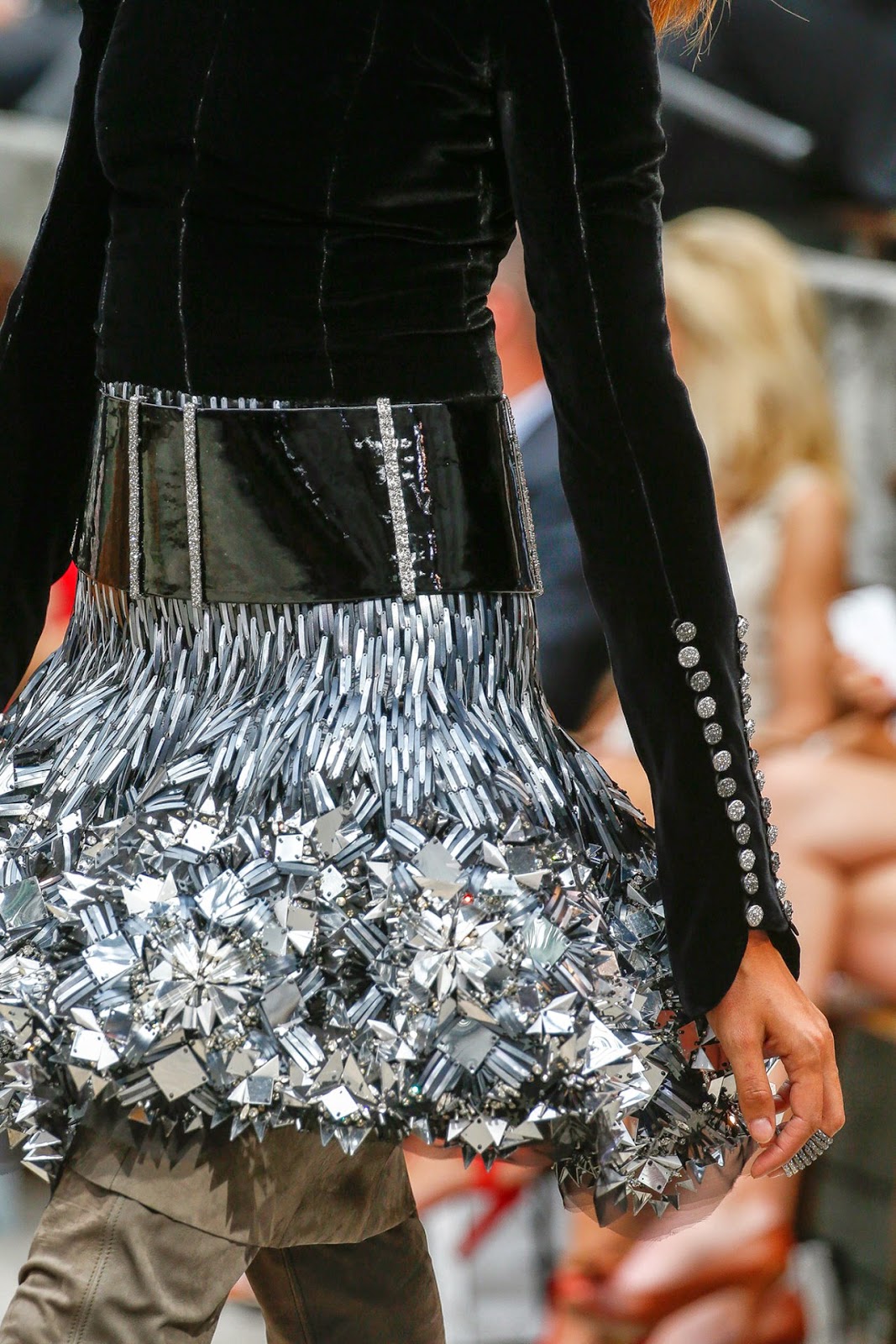 This is from a Chanel show in 2013.  What interests me here, is the sequin work on that pouffed skirt.  Its one of those times when technology, in the form of computer augmented design, and skilled hand labor, meet in the middle.  There will come a day when such complex embellishment work will be able to be done by robots, just not yet.  I love the fact that work of this sort, surface decoration on textiles, is always managing to come up with textures that exist nowhere else. 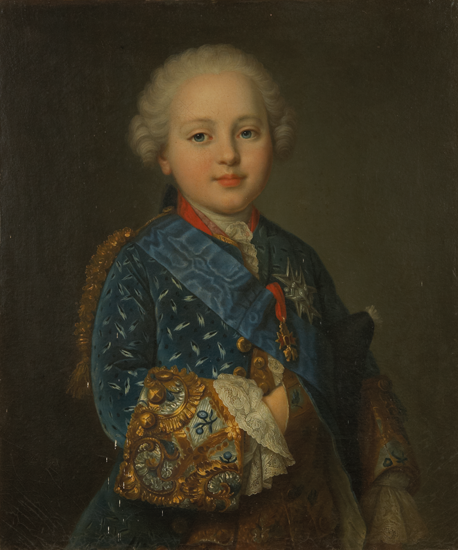 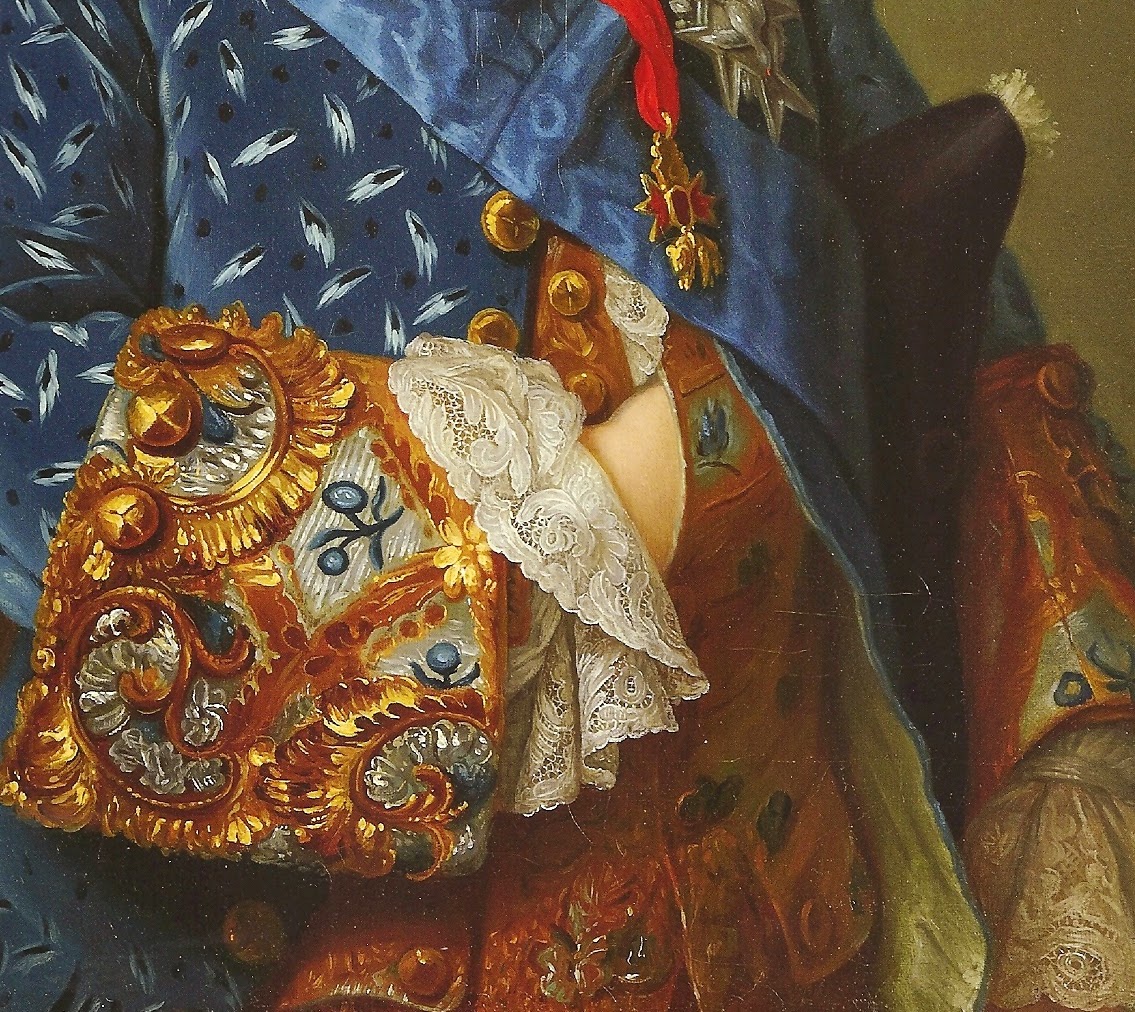 This is a portrait of the young Louis XVI, painted by Jean Martial Fredou that was done in 1760, when Louis was only 6.  This is practically a textbook of 18th century luxury, all in one little stiff shot.  The patterned velvet of the coat, the gold brocade of the waistcoat, those wildly embellished and gold worked cuffs, the sash, the medal, the order on his right breast, the exquisitely worked lace, even the tiny frill visible on his hat, all add up to one mighty statement of wealth and power, even though he was a small child.  His destiny to be king was made manifest. 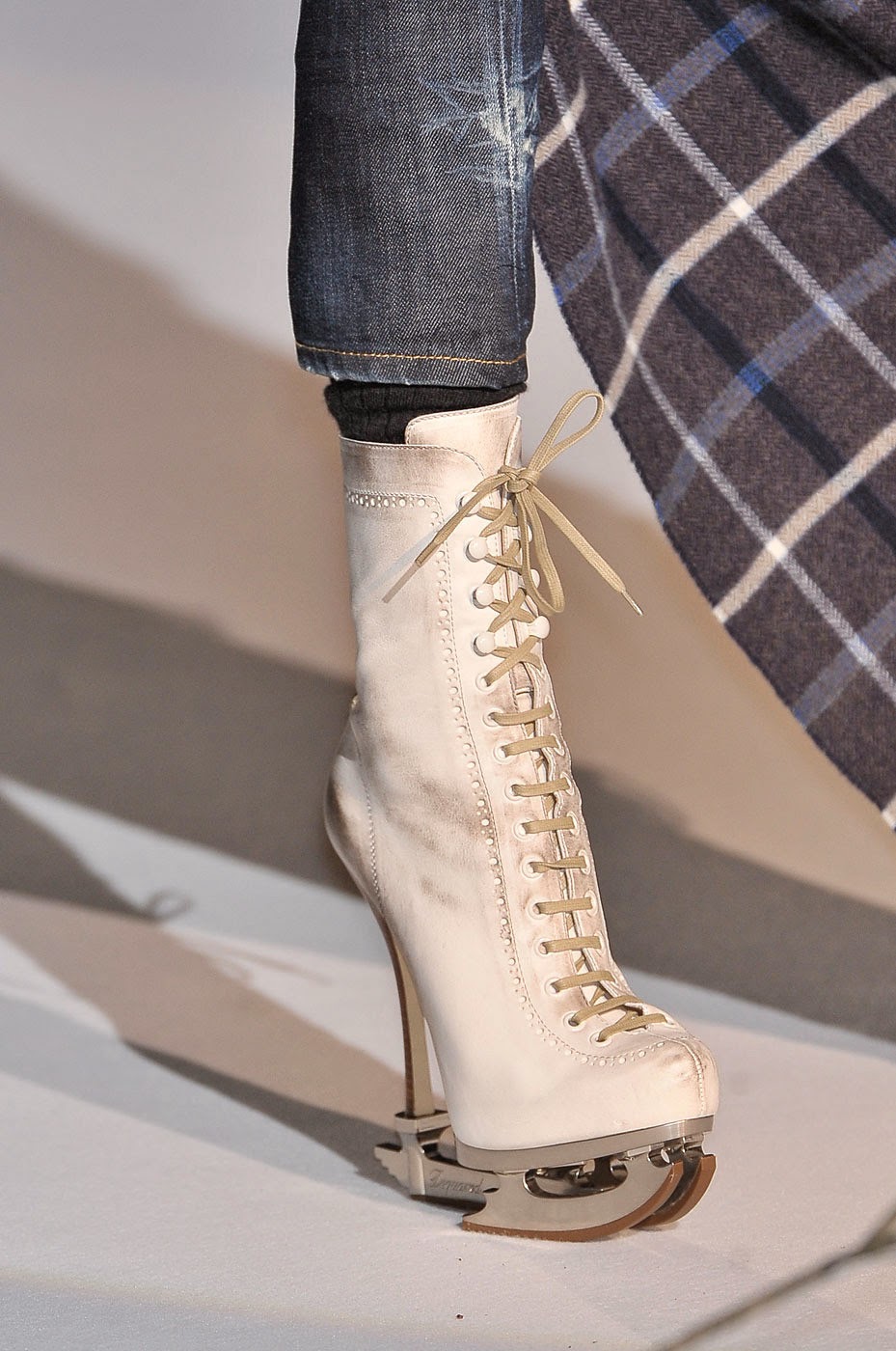 As a pair of shoes, these, made for a D Squared2 runway show in 2011, are dangerous, silly and strange.  They are also, however, a real world expression of surrealism, bound up, quite literally, with a healthy dose of fetish.  Really rather fascinating, actually, how these project so many different things at once.  Skating, sex, danger, and nostalgia, are all wrapped up in this single image.  And this is part of why I find Attire so compelling.  There is so much information crammed into each word in the language. 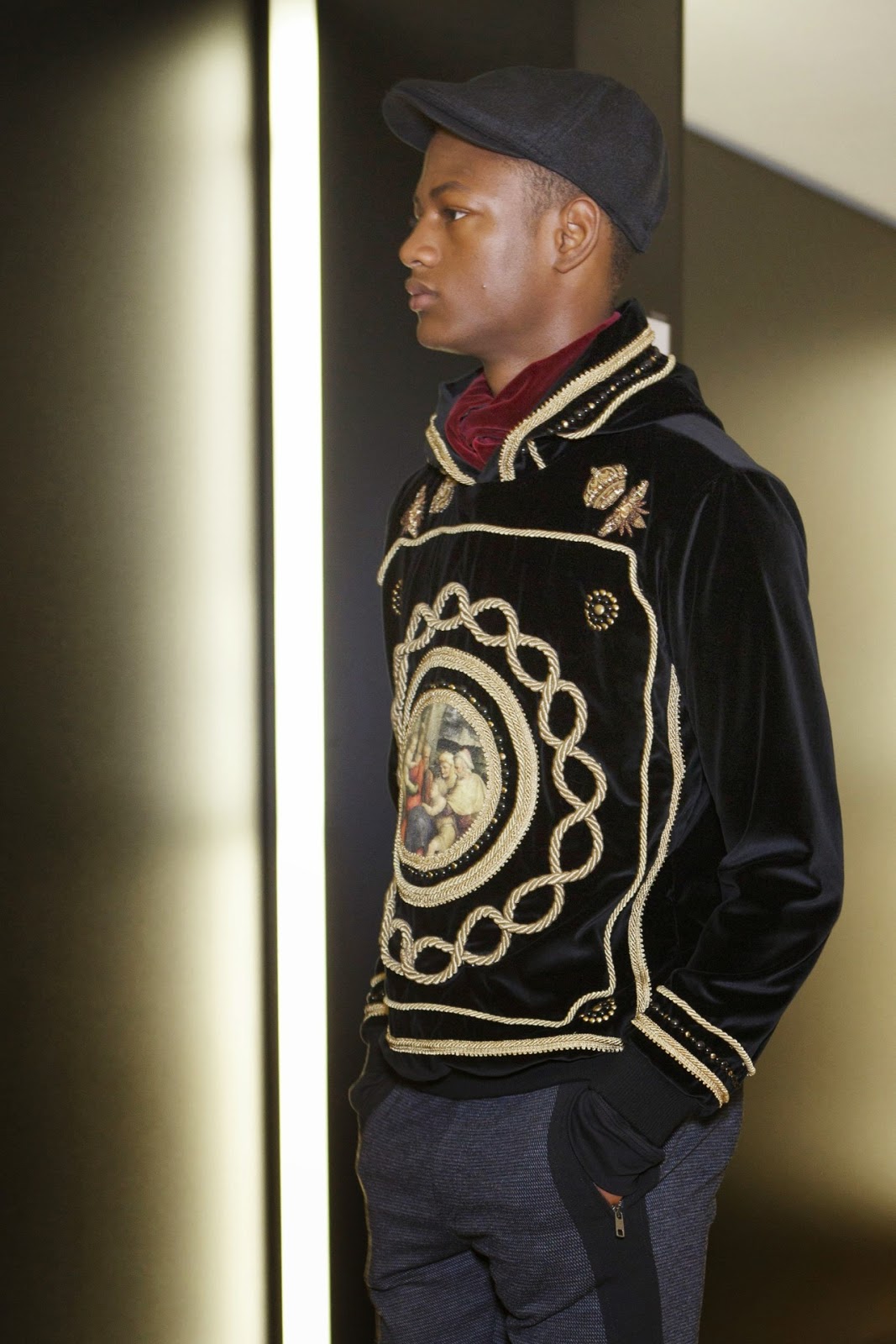 This is a Dolce & Gabbana jacket from their F/W 2015/16 collection.  There are things that I like about this, particularly that its messing with old school military uniform styles, and skewing it into another direction with the soft material and the Renaissance art in the central medallion.  What doesn't entirely work for me is the scale of the trimmings, in particular, the rope, because the essential stiffness of that rope trim makes the softer, more mobile fabric behave strangely.  That may have been the intention, but for me, its a near miss, though I love the idea. 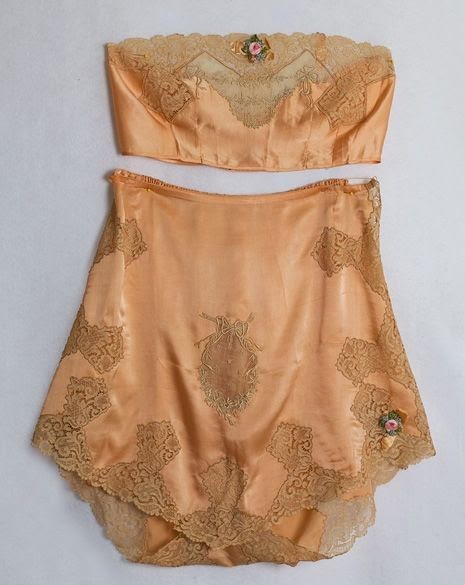 Boue' Soeurs made this set of very fine underthings in the 1920s, when women's lingerie was going through substantial changes.  As we moved further into the century, underwear and sleepwear changed right along with the outerwear, sometimes moving forward, like this does, faster than the times required.  But when a lady was in privacy, a good deal more latitude could be permitted.  Apart from the brevity of these pieces, its their flawless workmanship that stands out.  Exceedingly fine silk charmeuse has been expertly worked with lace insertion, and tiny roses.  An incredible piece of hand labor, and a vision of the future. Sometimes, a garment is not about function in any realistic way.  And sometimes that is precisely what we have in mind.  Occasionally, sexual allure is the only point to a garment.  This Adidas hoodie offers no protection from the elements. It exists to display a hot body and advertize a brand, nothing else.  Pretty man, packaged for consumption. 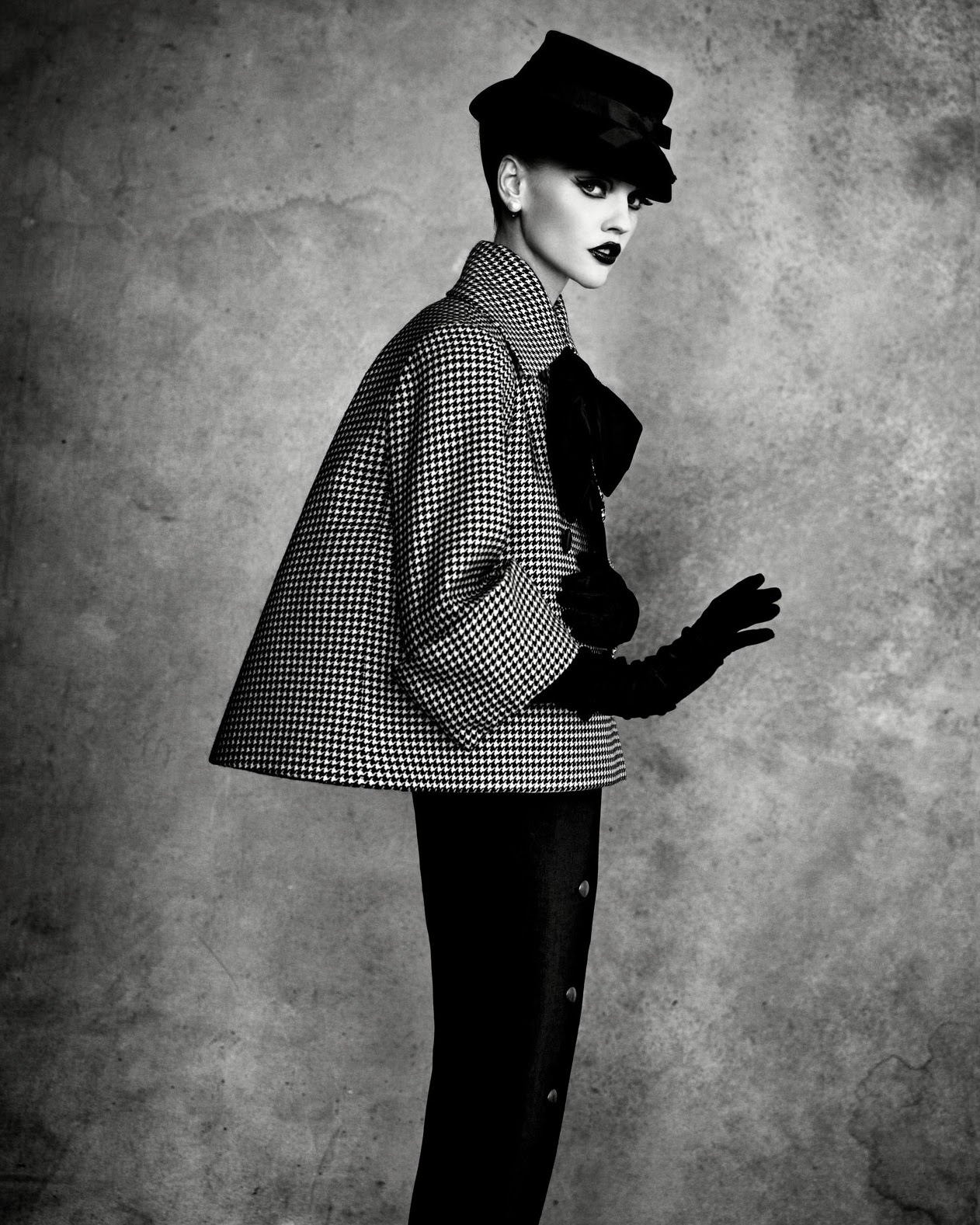 A while back Dior did a campaign in honor of their anniversary where they re-shot some of the most recognizable early Dior clothes on contemporary models.  This shot is of a suit called Aventure, and what strikes me so about this is how totally contemporary it looks, even though the model is posed in a very old school way.  It looks chic, modern and sexy as hell.  That is quite a tribute to the staying power of excellent design.  The tweed swing coat is wonderful, and paired with that slim, buttoned skirt, the counterbalance of volumes is perfect. 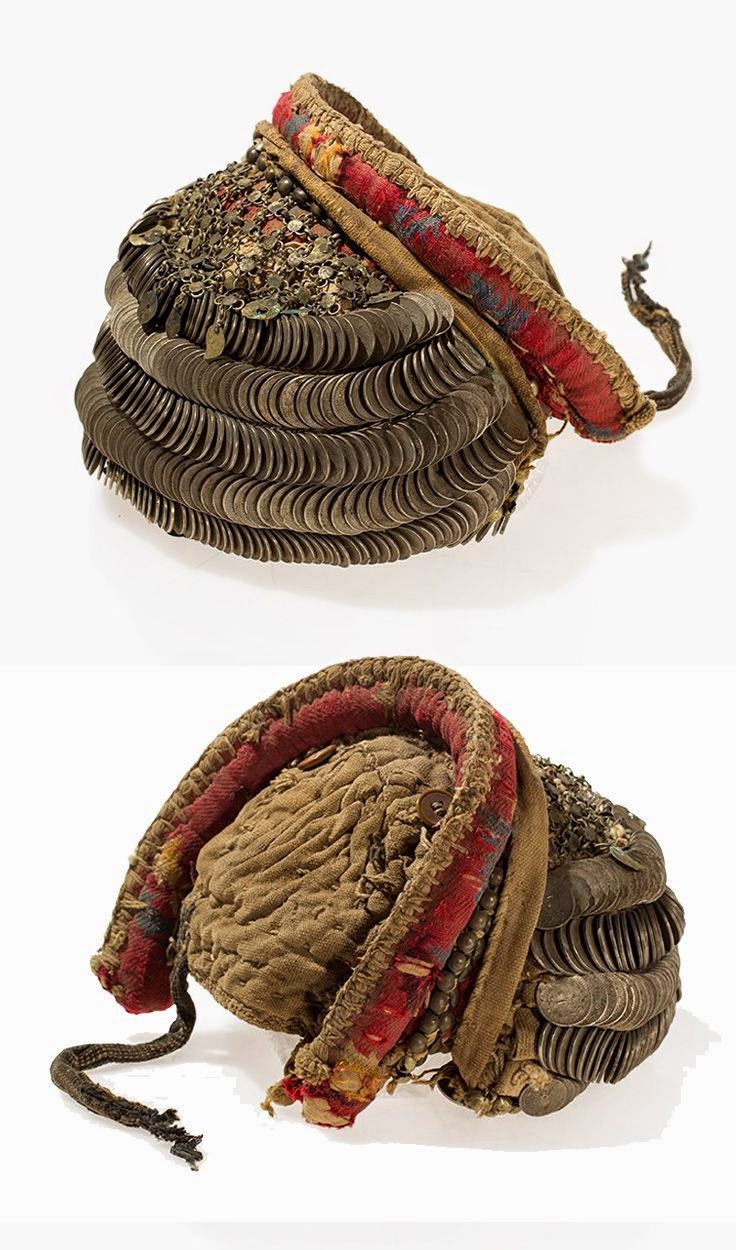 As a final entry today, this amazing bit of headgear.  This is a Turkish Bedouin headdress, from the late 19th century.  Made of colored wools, and heavily coated with both iron jingle bells and iron coins, this head piece must have made a very appealing sound while worn. And it also stands as an example of how, even among groups that live vastly simpler lives that we do, there is still a strong impulse to express extravagantly, within the confines of the available materials.  This is quite a lavish statement to wear, and perhaps, when your life is so mobile, such expressions become more important, rather than less.

Well, that's what got dug up this week out of the jumble box.
Have a Magnificent Weekend, Everyone!