Here we go again, Kiddies!  Its time for another mad dash through my overstuffed head.  Damn, the things that get my attention.  I'm sitting here shaking my head as a type.  But by now, you're all used to my wanderings. I just hope you're enjoying them too. 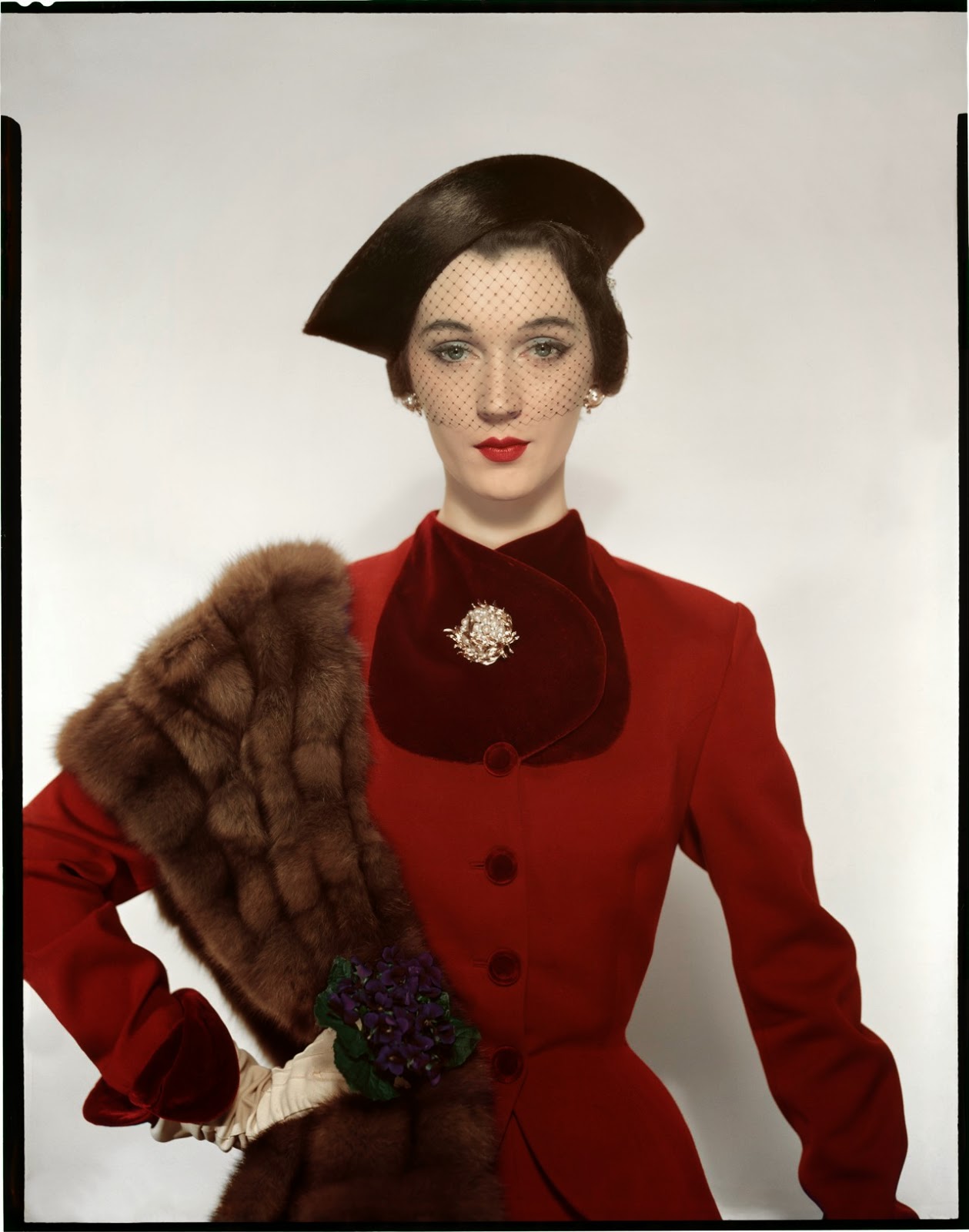 First up the incomparable model Dovima shot in 1950, by Erwin Blumenfeld for the August issue of Vogue.  Here we get a slice of prim and proper Dovima, a sort of styling they rarely gave her.  She has been styled to perfection here, and great model that she was, she's giving us all a serious dose of "Lady of Quality Who Is Not To Be Trifled With". And boy howdy, do I love that red suit with the velvet scarf collar. 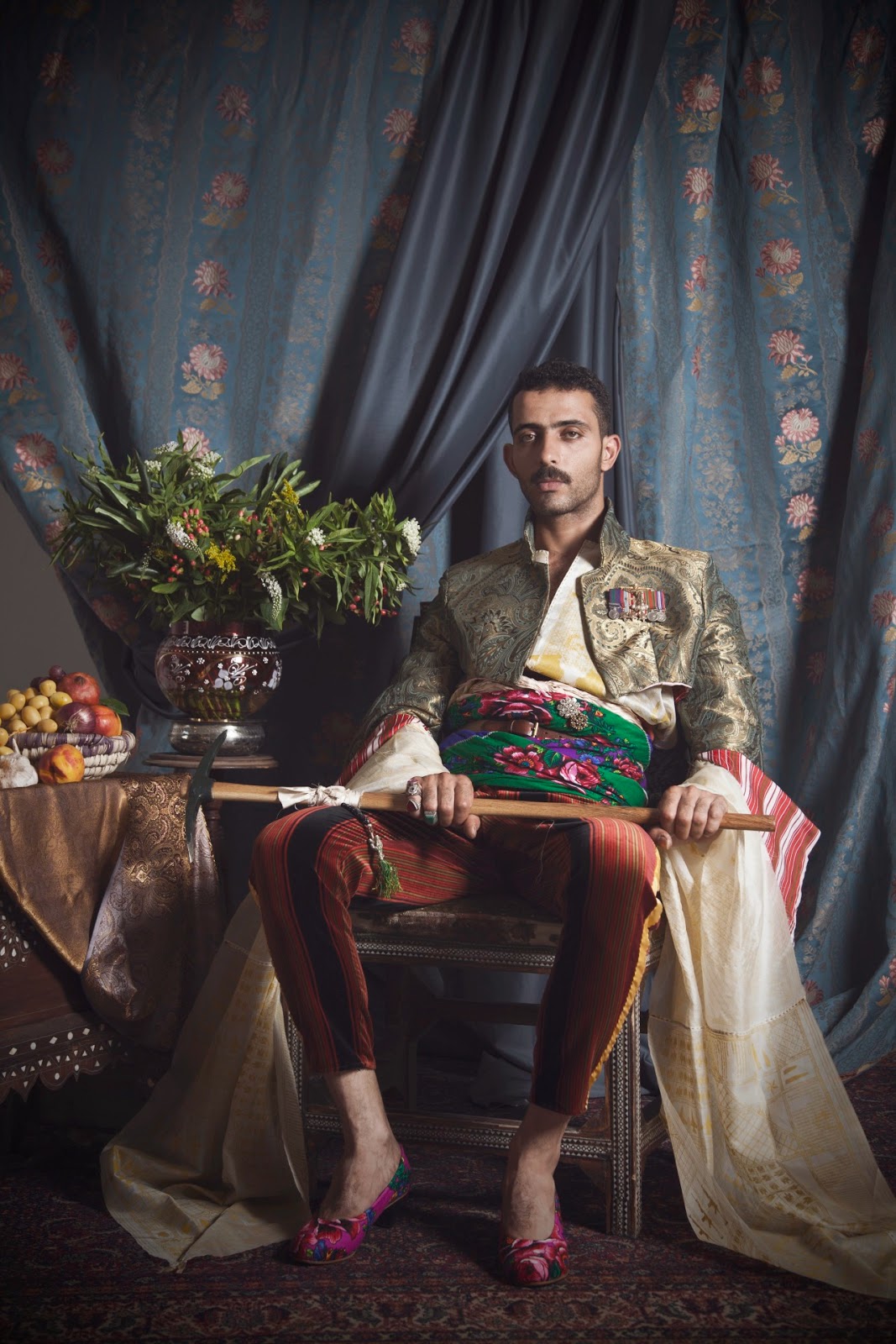 Another trip down cultural overlap lane, next.  This image appealed to me because its such a wild melange of differing influences, colors and textures, all working pretty well together.  As we continue down this road of mixed up societal references, we will see this sort of thing more and more often on the streets.  Not this exactly, of course, but ensembles we've created from all sorts of random bits, and snippets.  This look implied a traveled person who has a broad interest in the world and its doings.  He's not afraid of mixing both its highs, and its lows, together to create something new.  If this was not a staged shot, I'd say bravo to him. 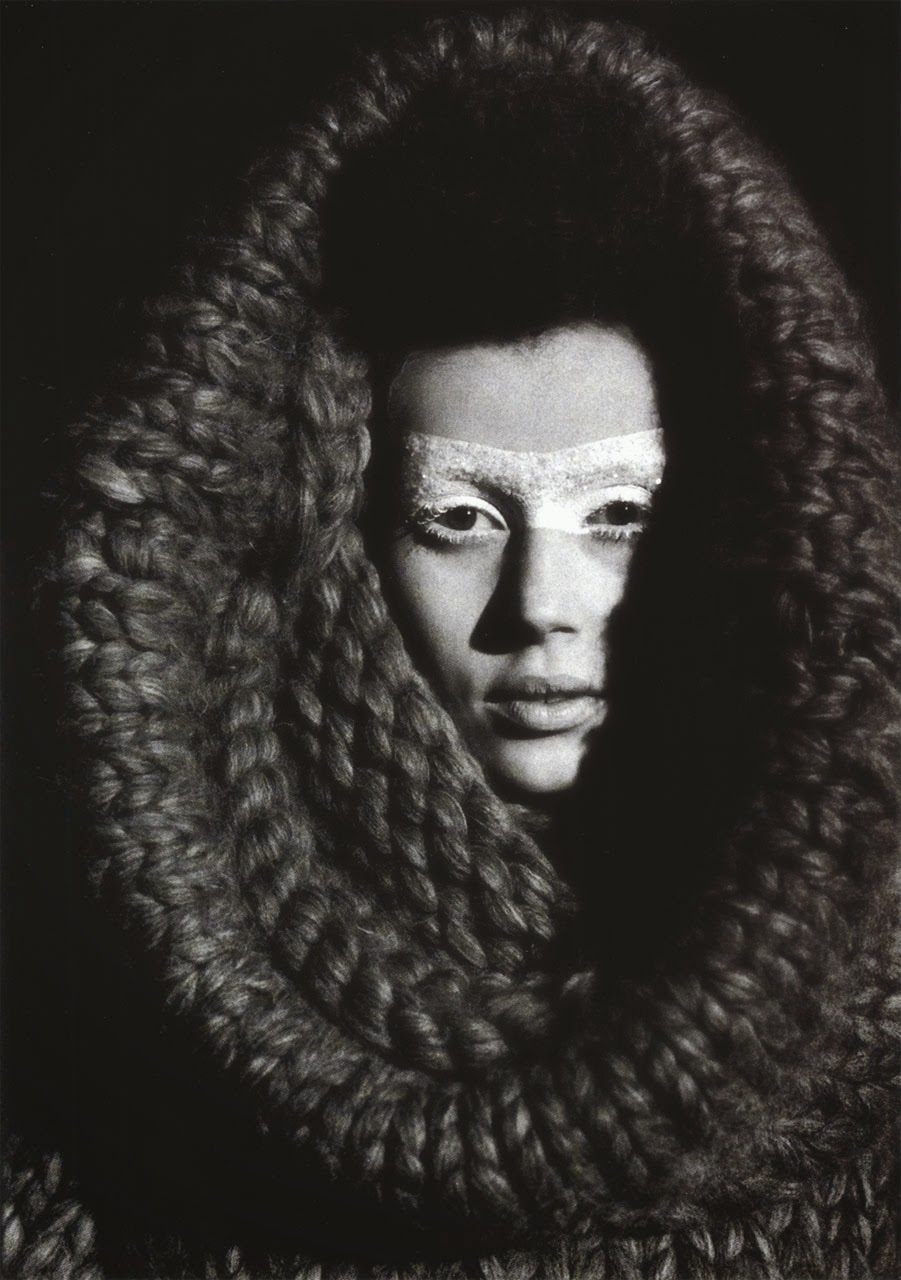 McQueen.  Fall/Winter 2000-1.  As trippy and odd as this runway look is, there is something really compelling for me about it.  The gigantic scale of the hood, with the model's head emerging only slightly, makes it seem to me that its not clothing at all, but that she is some sort of hybrid creature, part human, part something else entirely; capable of pulling her head inside her body, like a turtle.  One of the many things I appreciated about Alexander McQueen during his short, dazzling career was that he never forgot that a concept, no matter how intellectual in part, had to have an obvious emotional component in order to connect to the viewers.  This does that for me in spades.  To me, that relationship between the intellectual and the emotional is what makes for truly great design, and as such, for clothing that can help us express ourselves in the real world. 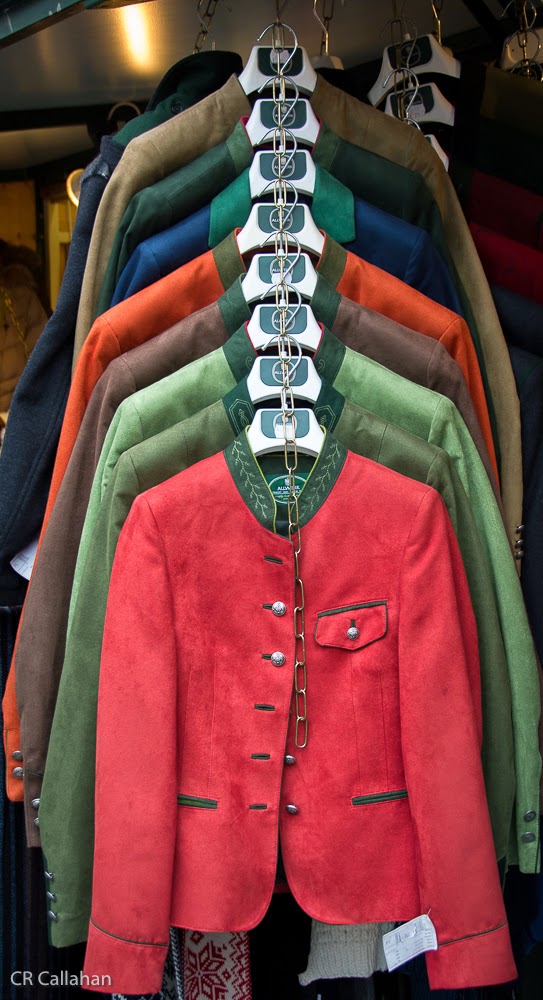 A gaggle of Austrian jackets.  Every culture maintains certain words within their subset of the Attire language that relate to them and their people, only. This style of jacket is a uniquely Germanic thing. There are variations all over Europe, but the ones here are common to Austria, Bavaria and Germany.   One of the other things that makes this style a bit different is that its worn by both women and men with equal freedom.  Many of the close held cultural Attire words are distinct to one sex or the other. 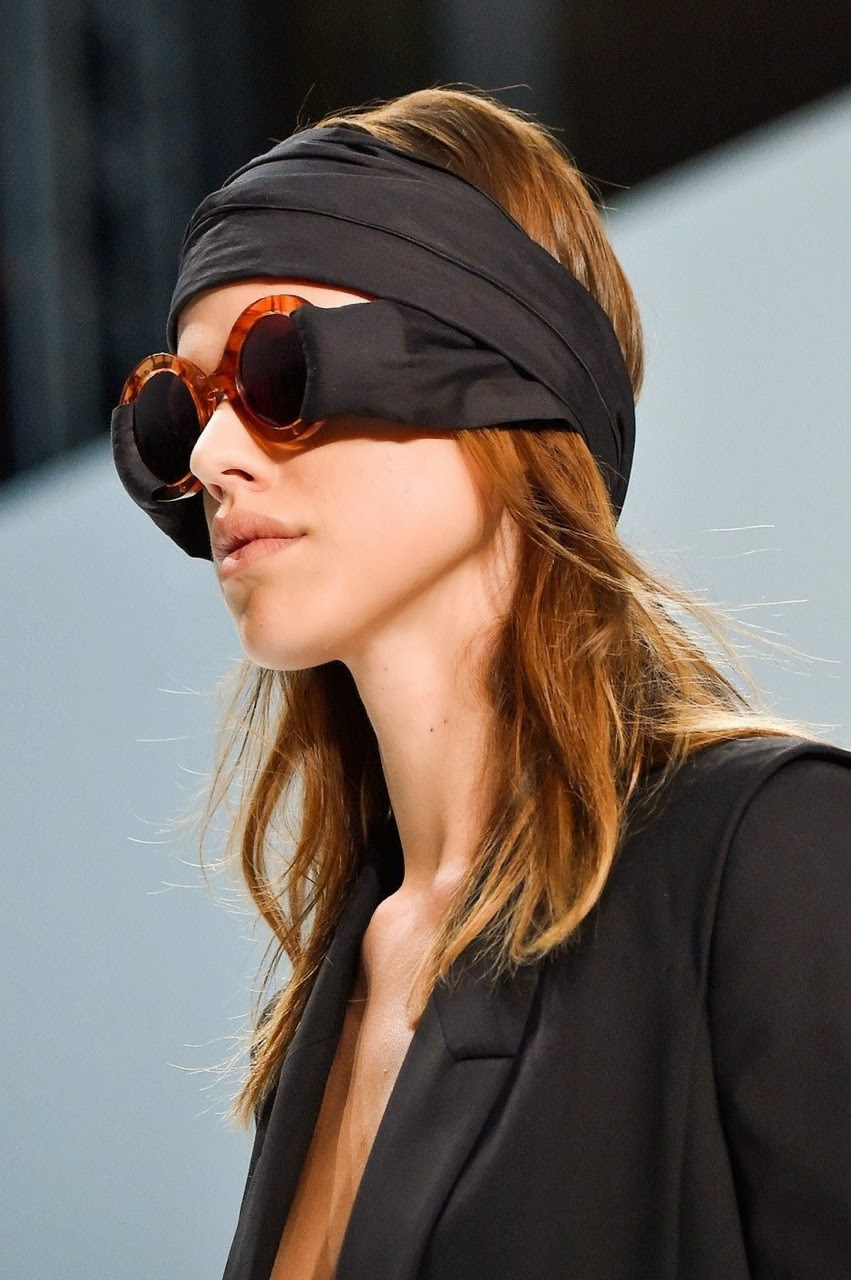 I do applaud anyone who toys with the conventions and sees new things among the different parts of what makes up our Attire vocabulary.  This combination head wrap and sunglasses, seems unlikely to step off the runway into common use, mostly because putting them on and taking them off would be a laborious process most wouldn't want to bother with.  But, as an experiment, and as a visual remark, I'm on board. 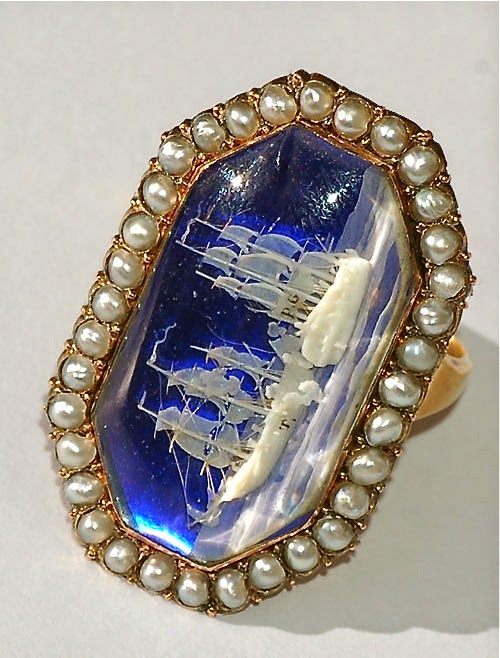 This is a gentleman's ring.  It was designed and produced in 1798-1800 and chronicles on its carved, and enameled cobalt glass surface, the Battle of St Vincent, in 1797.  Mounted in gold, and surrounded with seed pearls, such a ring would have been a very fashionable accessory for the gentleman who was either retired military, or wished to let everyone know both his patriotism, and his support of the countries fighters. 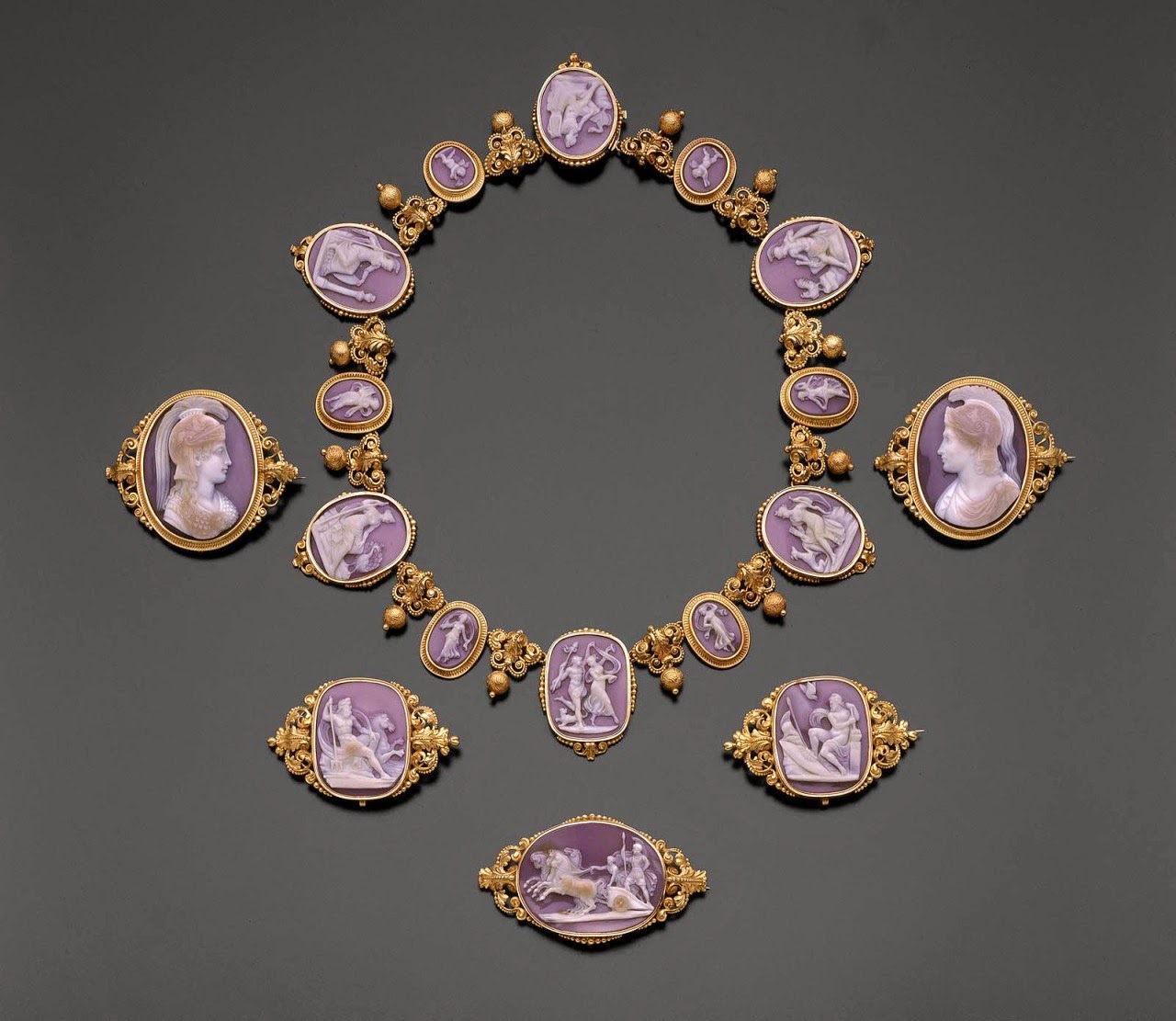 During most of the 19th century, cameos were enormously popular.  And certainly during the second French Empire, with its near obsessive fascination with all things classical, a parure of cameos like this would've been THE fashionable set of jewels to own.  Composed of a necklace and a series of pins, some of which can be attached to the necklace as pendants, its mounted in rose gold and carved from a (sadly not identified) lavender stone with tan veining. 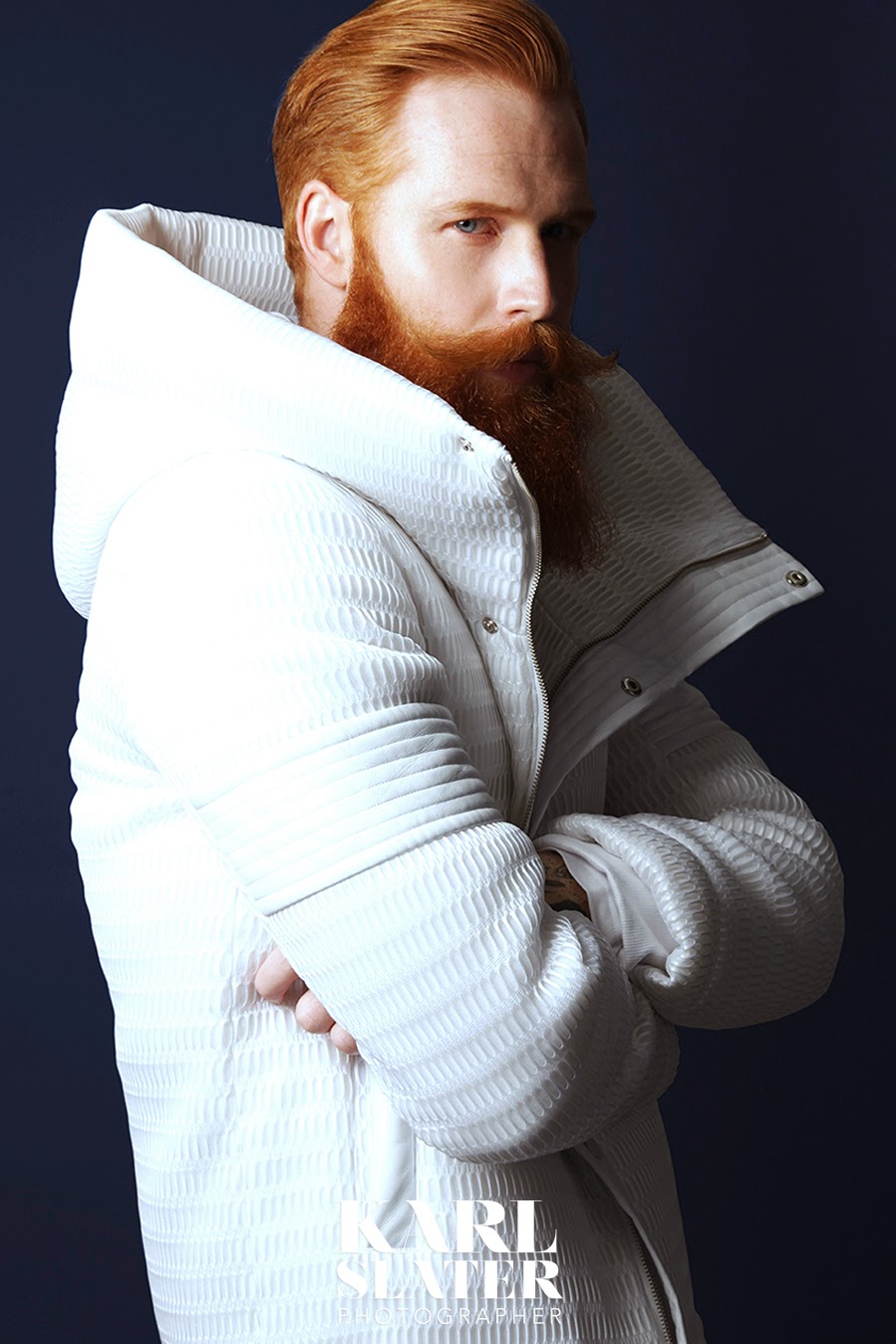 This Karl Slater design really got my attention. The coat is made from a really interesting textured white material, and I like the detail of the lateral quilted lines across the upper arm.  But what makes this work as a fashion image is the nearly literal fire and ice juxtaposition of the bearded, ferociously ginger model with the stark, architectural white of the coat. Perfect choice of model, pose and garment to make it all work wonderfully. 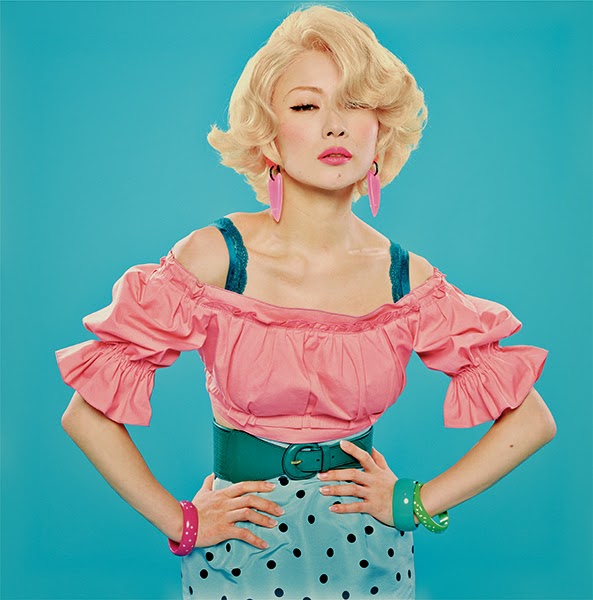 Japanese singer/songwriter Shiina Ringo, giving us the full Marilyn.  Certain images, certain persons in modern culture have become so iconic, that their images infuse themselves into, inspire the work of, artists, and others, all over the world.  If we were to be able to reach back in time and speak to Marilyn Monroe, and we could tell her of the profundity of the effect she had on those who came after her, even 50 years later, doubtless she would think it quite mad.  But there it is.  Sometimes, a person's sartorial image is so potent, speaks so powerfully to others, that it literally transcends time and place.  Marilyn Monroe is one whose visual statements, even though crafted largely by others, were of such power that 60 years later, they still inform the choices people make. 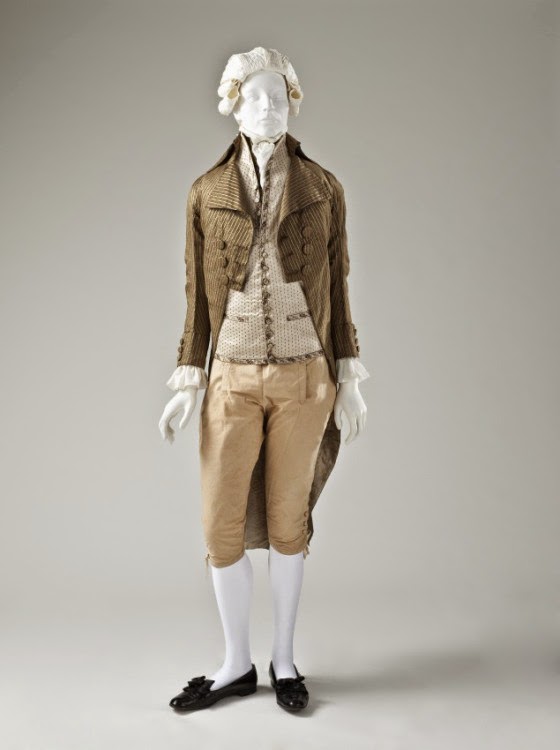 This gentleman's suit of clothes is from the early part of the 19th century and made in its entirety in England.  Forgiving the dummy which isn't quite the correct proportions, there are some interesting and odd things about, here.  The break point of the waistcoat, low as it is seems to draw the waistline downwards, below its normal position.  However the coat, with its double breasted cut, is so high in its waistline break that the actual natural waistline is in some unformed area between the two.  And that is actually why this works visually.  The differential between the low waist indicator of the waistcoat and the high one of the jacket makes us define the waist exactly where it belongs, even though there is no line drawn there apart from the trim on the pockets.  As Spock says "Fascinating". 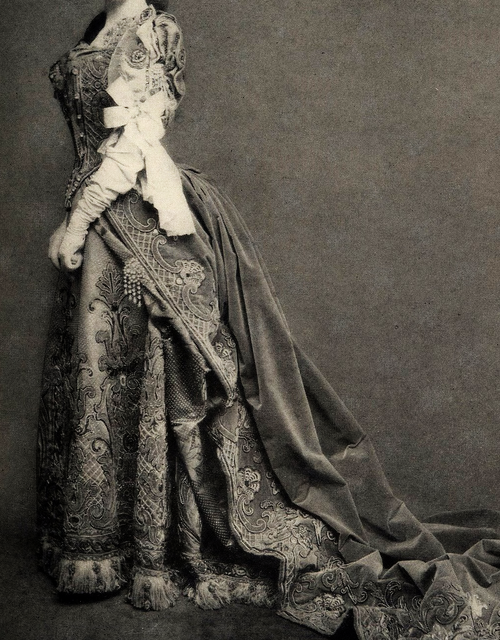 In 1890 a photograph was taken of this Worth dress.  Its remarkable for two reasons.  First, it chronicles nothing but the garment, the person is clearly of no matter.  Second, it was rare enough for a couturier's work to be chronicled at all, and much less so in a way that maximized the ability of the viewer to see every detail of the design. This photo shows a dress which bears every hallmark of a Worth design.  Dense detail, operatic drama, over-scaled embellishments , and above all, the very finest of textiles, all make us understand that this is the work of Charles Frederick Worth, and no other. 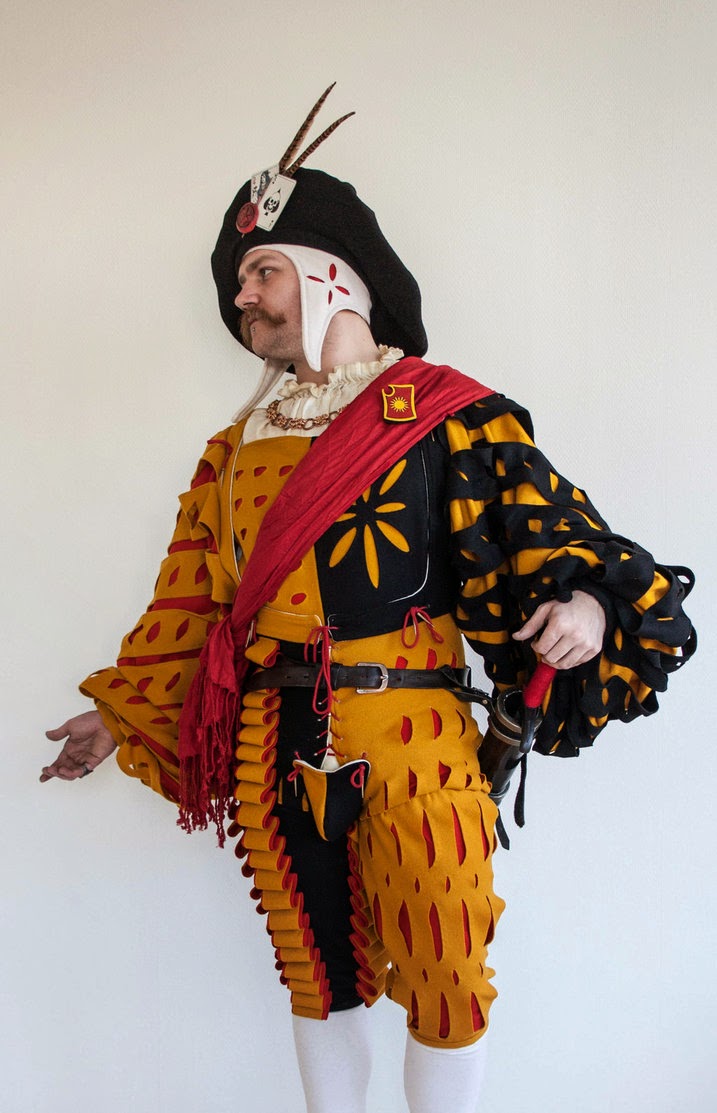 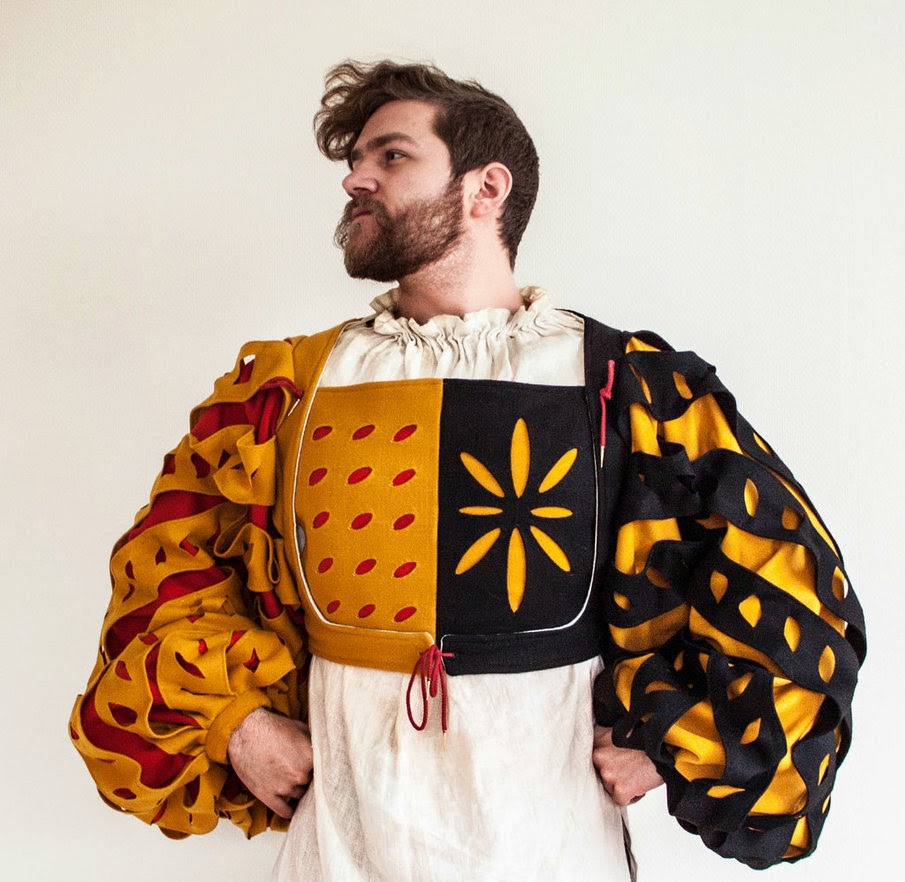 I don't typically post things that are contemporary costume efforts.  This one is so good in terms of how it delineates the Landsknecht style of Germany, and eastern Europe in the Renaissance, that I had to share it.  There are two things, though, that I must mention.  One is the dye colors.  Such perfectly flat, and intense shades, were not available to the people of Europe at the time.  Also, the perfectly flat, sharp edged finishes of the garment owe everything to sewing machines and modern irons, neither of which existed when the Landsknecht style was in vogue.  The Landsknecht grew out of the apparel of soldiers and mercenaries who got their clothes slashed in battle. It became fashionable to slash more and more, deliberately. Eventually, even the stockings were slashed, exposing either bare leg beneath, or a second layer of stocking of a contrasting color. This fashion spread across Europe as a desire to carefully cut fabrics in regular patterns, to reveal the lining beneath, and lasted in some form for over a hundred years.  Whoever the person is who made this costume, they deserve praise for their research, and their skills.

So, that's all folks, for this week's scatter.  I will have more to share of course. Have an Awesome Weekend All!