This is the 40th time I've let you roam about in my head on a Saturday.  I hope its fun for you, it is for me, I gotta say.  And I do truly enjoy sharing these things with you, for their beauty, humor, and possibly informative aspects.   So,... lets DO this! 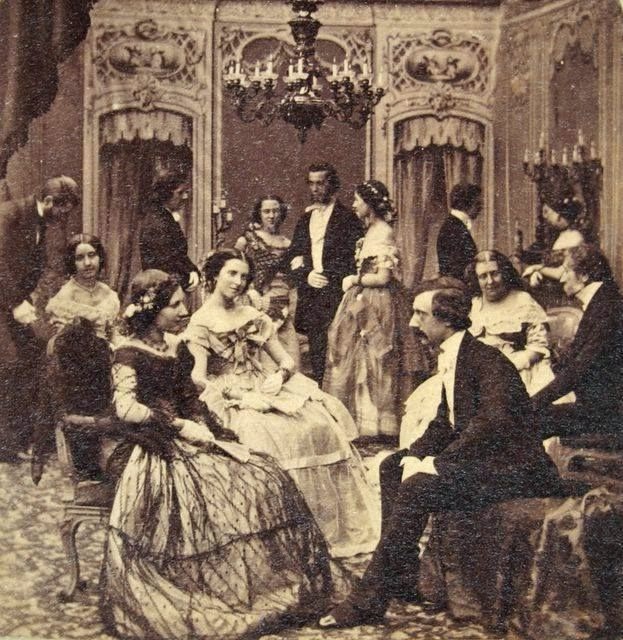 This first image is an early photograph, of a evening ball, held in the 1860s.  What really appeals to me here is that we get a rare look at people in their apparel, not as artfully, or stiffly posed as is the norm for studio images that survive that time.  The men's clothing is largely indistinguishable, since by that point menswear had fully ossified into the pattern it still holds to a significant degree.  The only things that identify one man from another is their head and facial hair choices, and their neck wear choices.  The ladies, of course, are much easier to identify, as there is such a broad range of pattern, texture and decoration between them all.  You can clearly see the dominant silhouette of the day, and the most popular hair style.  Also, we can see how a huge crinoline operated in the real world; again much different from the aspect we see in studio card images that survive. 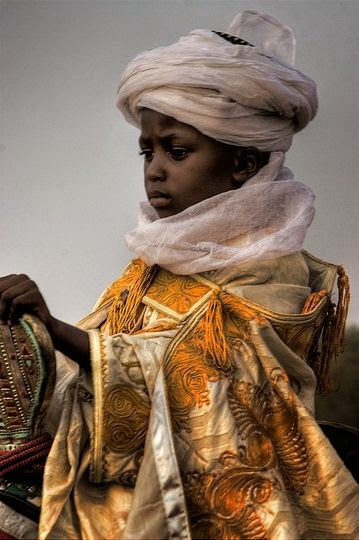 I found this Ethiopian child's image beguiling.  In his beautiful cord work embellished burnoose, and sheer fabric turban, he's like a princeling from some fairytale.  Our apparel surely has the power to lift us away from the ordinary, given the chance. 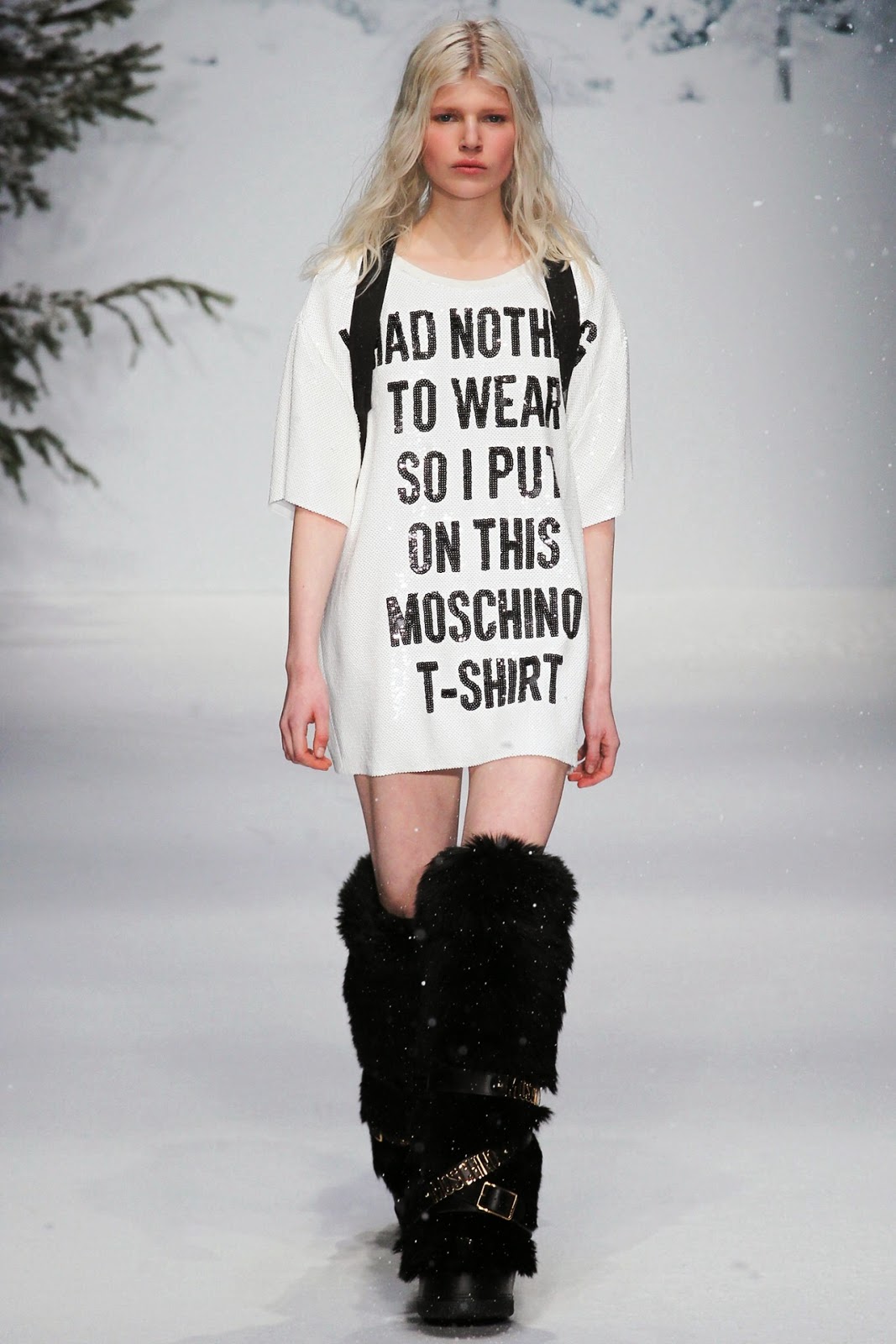 Mkay, so I rarely weigh in in a negative manner here, I know, this is an exception. I found this effort from Moschino both a cheap shot, and rather absurd.  I suspect the intent was some sort of irony laden satire.  To my mind it doesn't work. For me it comes off as a vulgar advertizement, smack in the middle of a runway show, where none is needed.  Plus, those boots?  Really?  Where and for whom would those be appropriate?  Also, the notion of someone who can afford Moschino clothing making a statement of that nature is insulting in the extreme to people of lesser advantage.  Rant over. 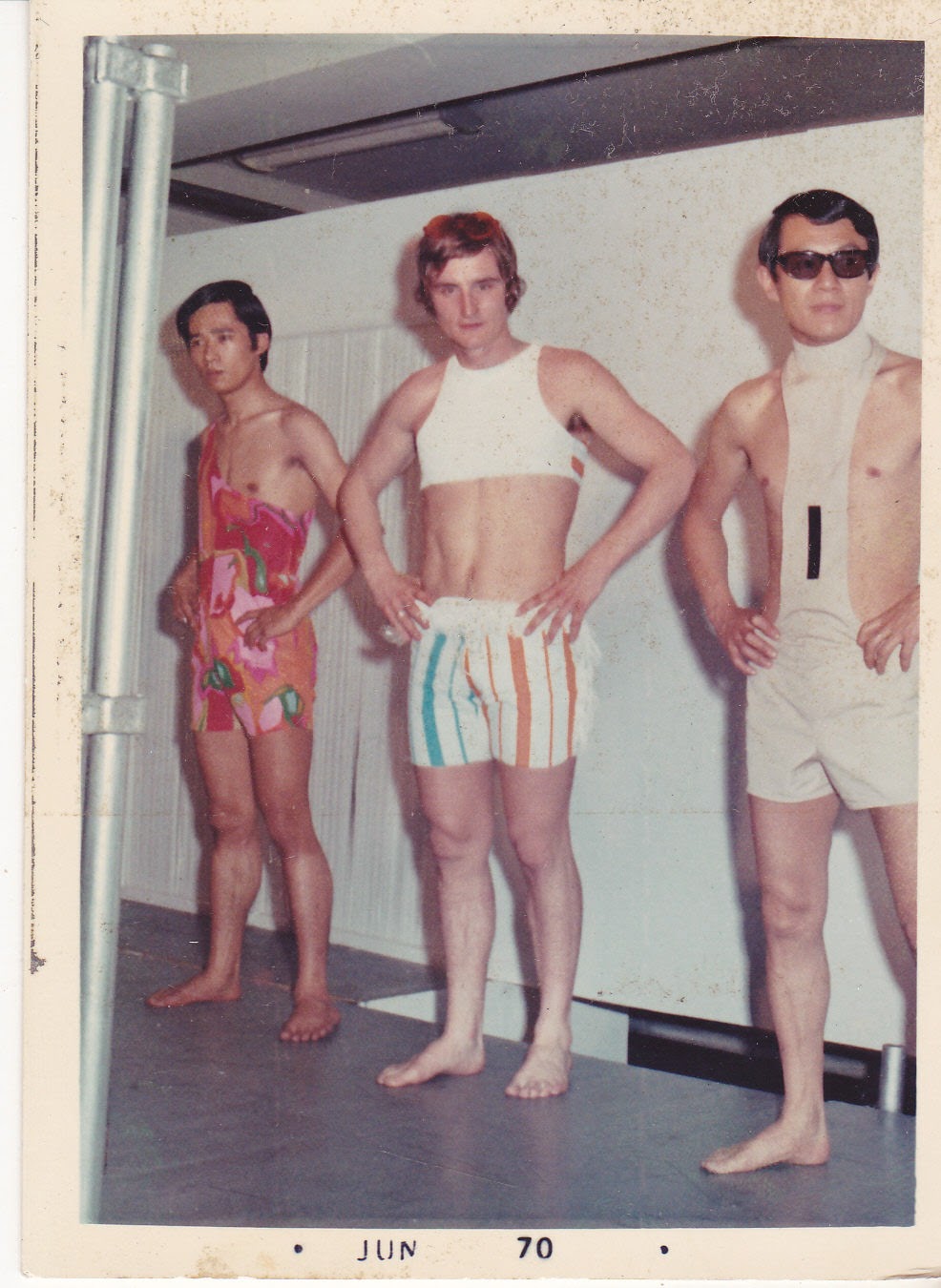 Periodically I come across an image of someone's efforts at Avant Garde clothing from another time. I always find them charming and a trifle naive.  This is just that sort of thing.  Shot in the 60s, this set of fellows are showing off some edgy menswear, that doubtless never got worn anywhere in the real world, but such experiments are vitally important, even when they don't fully work.  I particularly like the outfit on the right. A play suit with an attached dickey front and turtleneck collar, gotta love that. 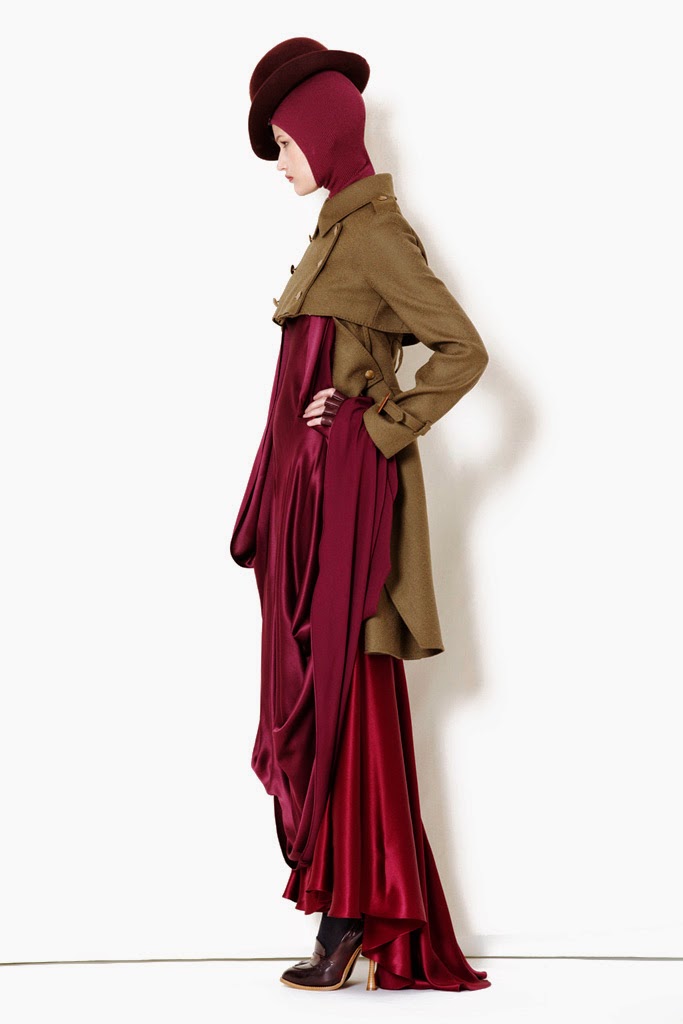 In 2009, Alexander McQueen did a collection that was a meditation on the intersection between tailored and draped garments. using his incomparable tailoring skills, (he often cut and sewed things with his own hands, even after his rise to fame), he paired immaculately assembled coats and jackets with fluidly draped, intensely hued dresses and pants. As a visual statement, this one exists outside of time or place. it is entirely itself. And as a goal for any of us in our Attire expressions, I think that is the ultimate. 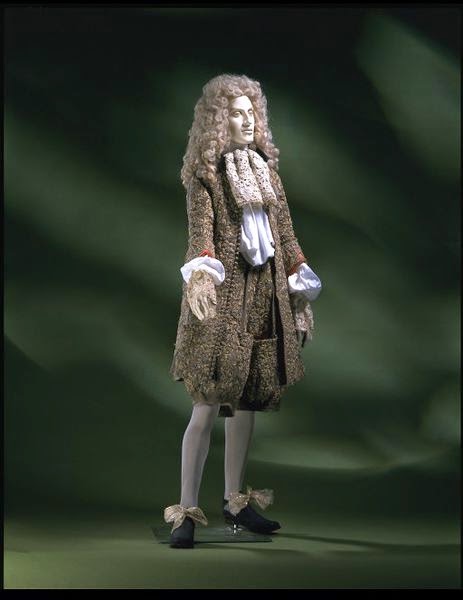 This gentleman's suit comes from one of the times in history where the proportions of the body were deliberately skewed away from natural lines to create a different combination of shapes, the 1670s.  The waistline is very high, obscured under the huge shirt. The sleeves of the shirt, enormously long, end with lace cuffs that almost fully cover the hands.  The sleeves of the coat, however, end somewhere on the forearm rather than the wrist, creating an odd visual confusion.  Both the periwig, and the falling lace bands of the collar are extreme, creating an impression of greater size to the head, at odds with the rest of the body.  All in all, it was one of the odder times in men's fashion history. 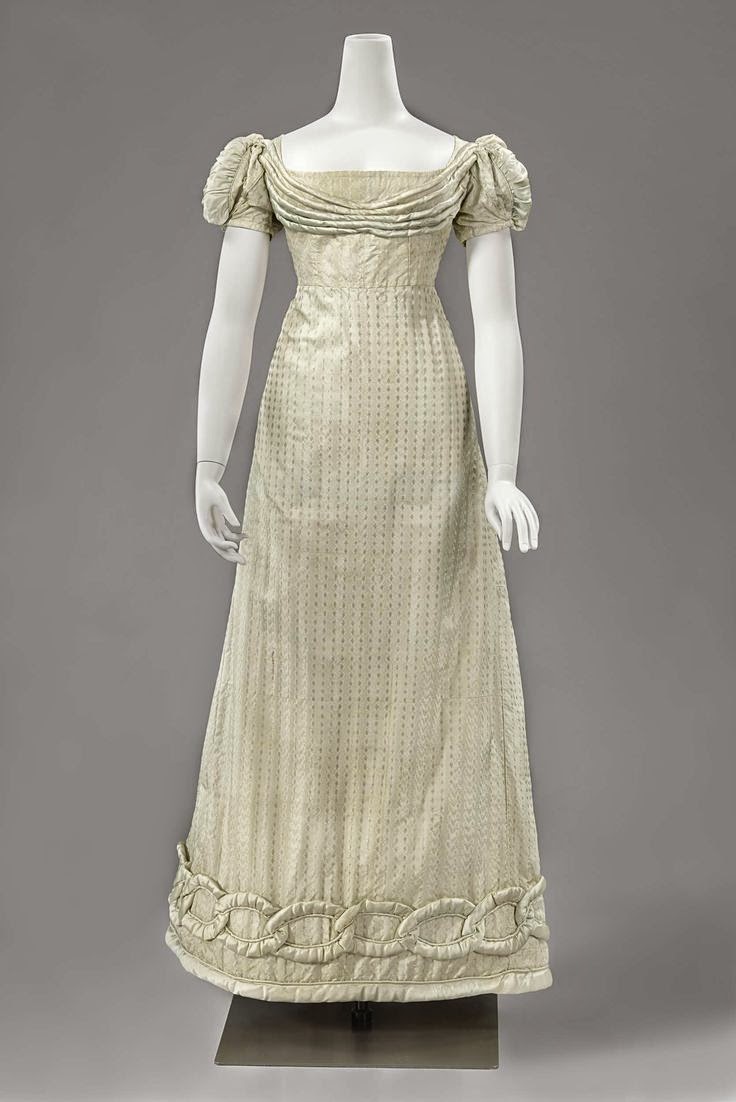 1815 saw the beginnings of the shift towards wider and ever wider skirts for women, after the great deflation that happened at the end of the 1700s.  This charming dress, would've been worn for evening, or to a ball. It bears all the markers of its time  The slightly conical skirt is decorated en roulade, with puffed bands of stuffed bias cut material, and a padded hem, which gave skirts a rigid appearance. The bodice and sleeves are elaborately worked with more en roulade trimming, with puffs, and with fine pleats.  The sleeves bear the vestigial beginnings of the vast sleeve volume to come in another decade.  And the waist has dropped a bit from its position directly under the bust, to something closer to the natural point. 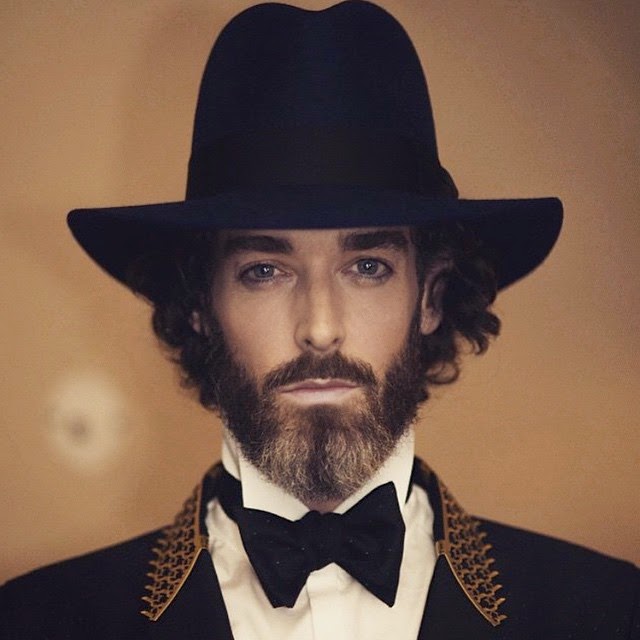 Now and again an accessory comes along that breaks with tradition, by mimicking it to a degree. This metal collar, which clearly is meant to be detached and worn with whatever coat one wishes, is exactly that.  By aping the shape and function of the coat collar, but rendering it in metal, and as a discrete piece, it becomes jewelry, and also an accessory that could have broad use.  I can see something of this sort gaining footing in the Attire language, and most especially, for men.  It could imply an armorial aspect that I think a lot of men would find themselves okay with.  Thoughts about this? 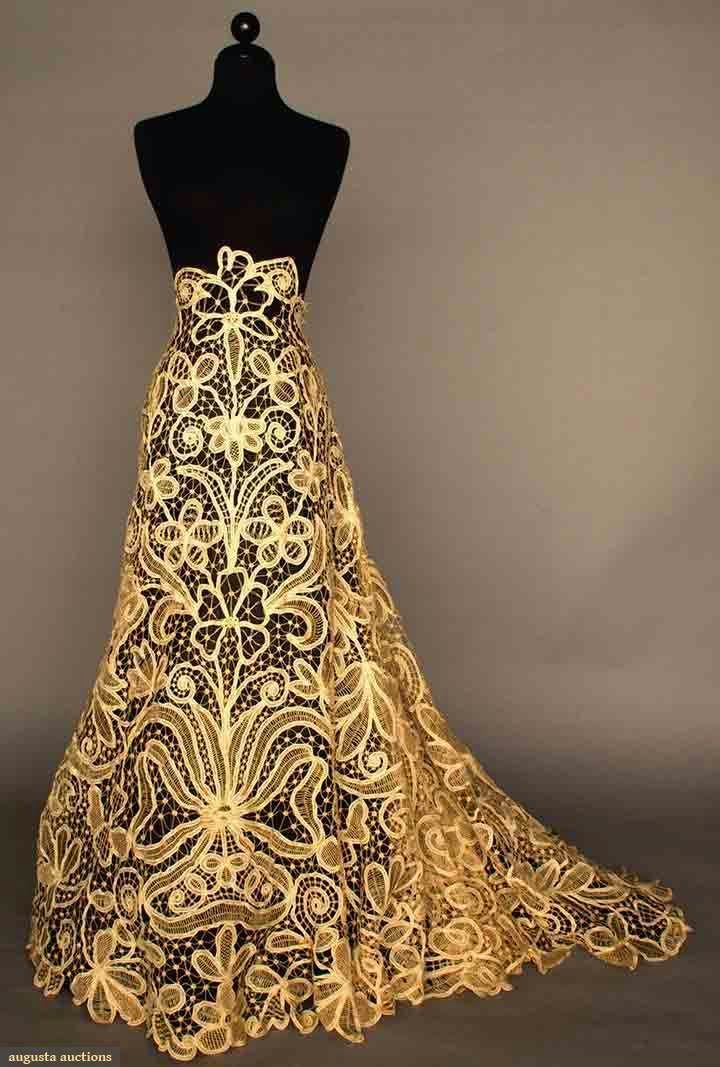 This skirt, offered by Augusta Auctions, is entirely of Battenburg lace, also known as tape lace.  Tape lace is made by taking the narrow, and very mobile white cotton tape and joining it together in patterns using threadwork.   Such skirts were often made to measure, and had non-repeating, large scale patterns on them, as this one does.  Very likely this would have been paired with a matching bodice, and possibly a jacket or coat.  Such things were considered very fine summer or resort wear.  And the lady could alter its impression by changing the color of the underlayer, so it had some versatility, along with its fashionable appeal. 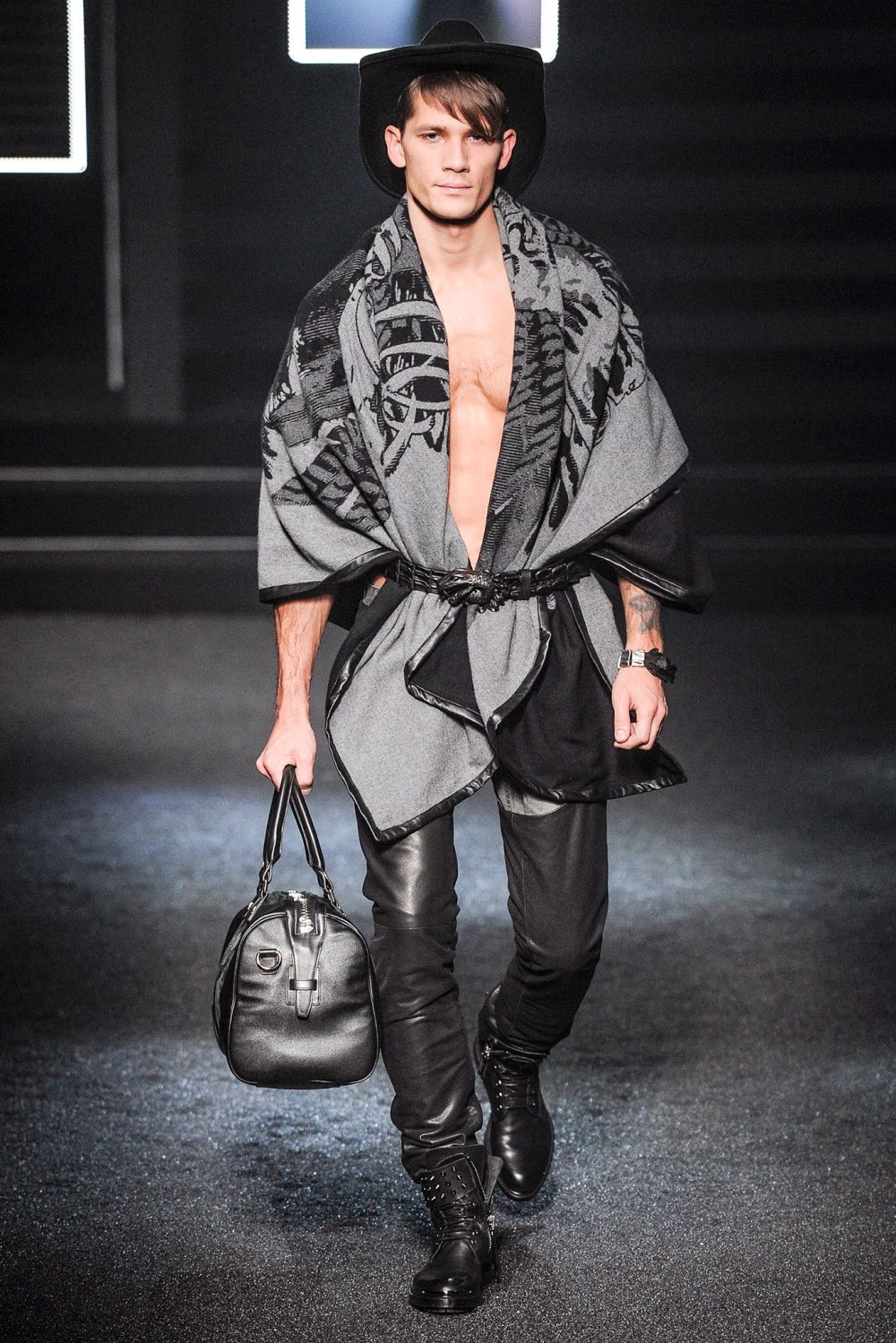 Here's one of those times where what I see isn't what would first jump to mind.  Sure, the outfit is rather silly.  That's not what I'm focusing on.  What I'm seeing is potential.  The way that blanket wrap has been laid over the models shoulders and held by a belt is a concept that could be explored far more effectively.  Men's clothing tends not to rely on the draped aspect of Attire, so introducing a draped garment that could express many different things, based on how it was draped and fastened, and what material it was could birth a whole new way of men thinking about clothing their upper bodies.  Jus' sayin' is all. One of the things that seems to be spreading across all of the Attire language is a willingness to experiment with color on color, and pattern on pattern.  In prior times, ensembles like these would have been considered wrongheaded, or just plain tasteless; but our constant exposure to other cultures and ideas, is broadening our understanding not only of each other, but of the subtle relationships of color, pattern, and texture, that create the base structure of the Attire language.  Looking at this young man, we might never consider that these two bold patterns would work together, but they do.  The colors have the same intensity, and the patterns share a level graphic boldness. 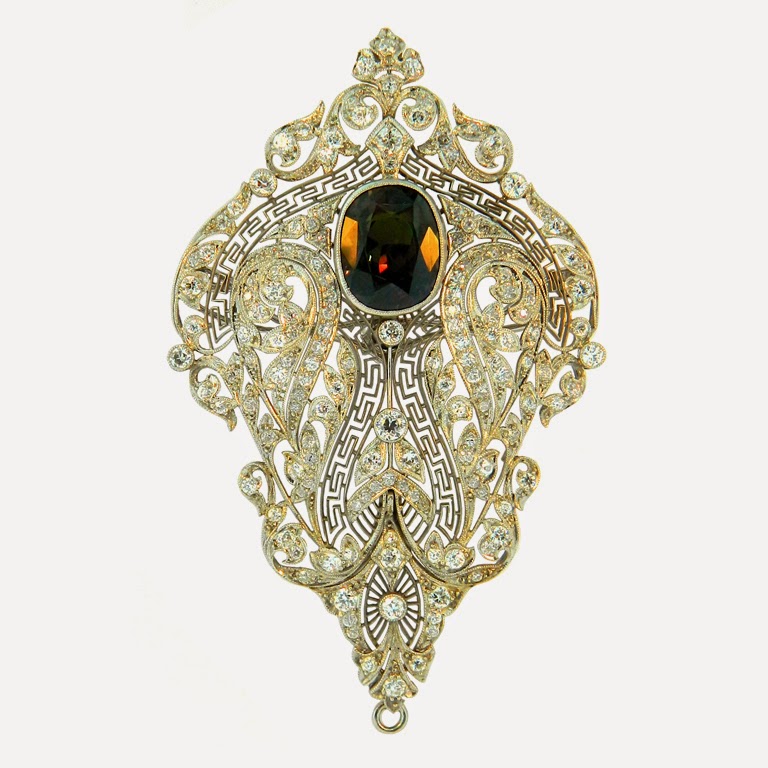 Sometimes I do find the internet frustrating.  This Alexandrite, diamond and platinum brooch/pendant is listed again and again as being Art Deco.  I'm not entirely sure that's correct.  Also, if you note the small jump ring at the bottom of it, that to me implies that this image is actually upside down.  If that is in fact a ring to thread a ribbon or chain through to hang the pendant. Then again, there is visible a pin bar through the open parts of the brooch that is consistent with it being right side up.  In any case, after scrolling through pages and pages of references to this image, I haven't found anything conclusive.  Me?  Miffed. But only slightly.
And that finishes us up for this weeks Scatter.  Have an Awesome Weekend, all!
Posted by Paul G. Ellis at 4:03 AM