The fin de siecle was an amazing time.  It was a time of the wildest extravagances, amidst enormous social, and political upheavals.  In just another decade of time, the social conventions that had ruled the lives of most people in the western world would being to collapse, to be replaced by simpler, more straightforward ideas of behavior and personal appearance.
This Worth dress, when I first caught sight of it, called out to be shared with you all.  Its a wonderful example of precisely the attachment to convention, and to conspicuous consumption, that marked the whole Victorian period, and that was so resolutely swept away in the coming years. 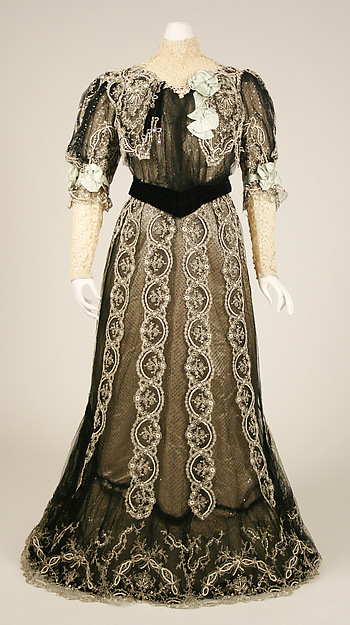 Looking at this dress, with its sequins, laces, and abundant decoration, we might think of this as an evening dress.  Its not.  This gown would have been worn by a woman of the very highest station in life, for receiving guests in the afternoon, or perhaps for visiting those same people at their homes. Both the high collar, and the long sleeves, mark it as a daytime garment, regardless of how sparkly and fragile it may be. 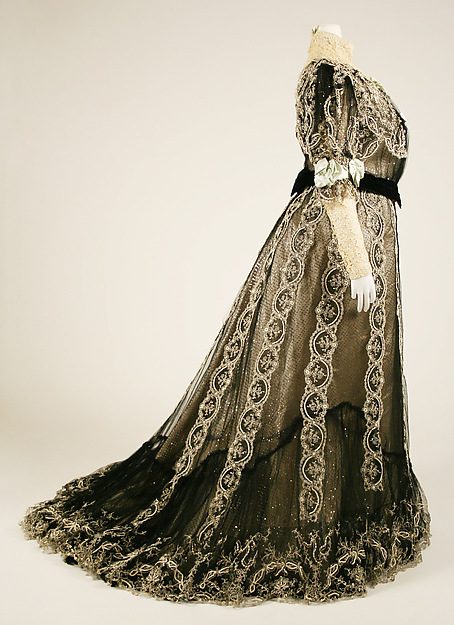 Made up in silk and cotton, the dress conforms in every respect to the silhouette of the day. In fact, devoid of the over dress, the cream silk under dress would be utterly unremarkable.  Everything that makes this so special is happening on that outer layer of black cotton netting. 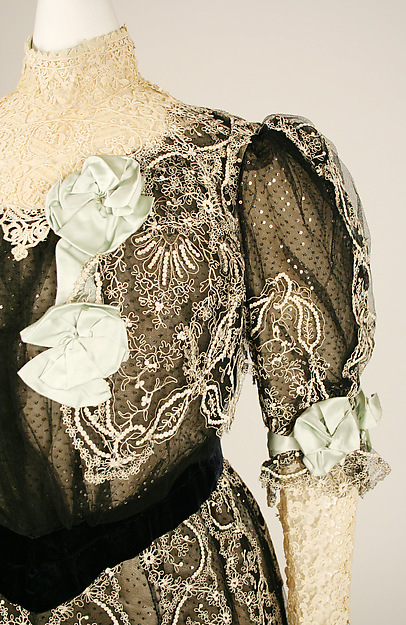 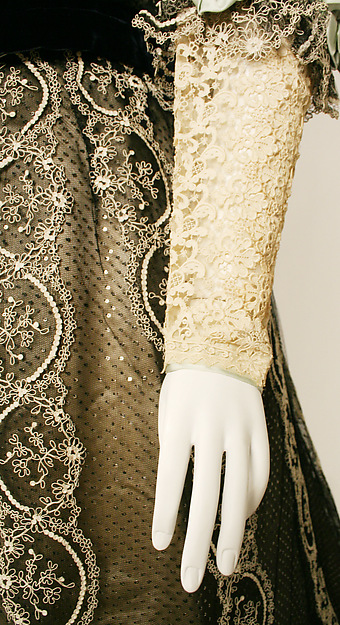 Starting at the neck, there is a high standing collar, and dickey of cream colored lace, mounted over the same cream silk as the under dress.  The bodice is designed to appear to have a bolero jacket, which is a layer of the cotton netting extensively embroidered in while silk floss, in a pattern of floral garlands. On one side of the bolero there are a cluster of velvet ribbons with rhinestone tips, on the other side, and decorating the sleeves, masses of white silk bows. There is also a gathering of the netting in the center front to give the fashionable pouter pigeon shape to the bodice, and the lower sleeves mirror the same lace treatment as the collar. 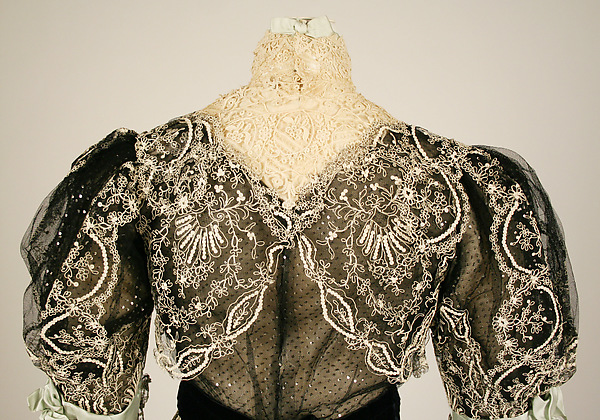 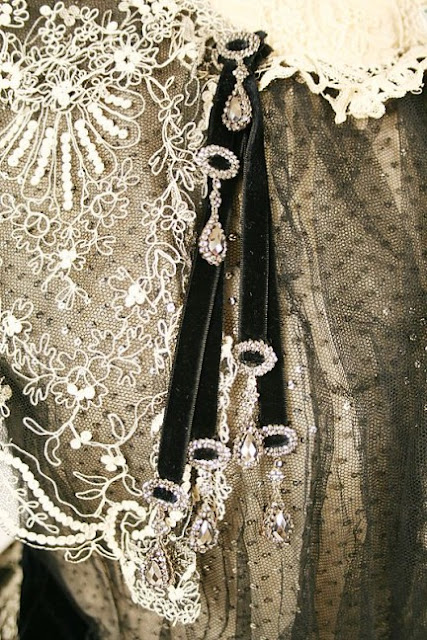 The black cotton net is regularly embroidered with tiny silver sequins that are applied separately from each other.  The application process known as lunette, where a hook like a crochet hook is used to make the process go much faster, by sewing applications on with a continuous thread, was not used, which means that this dress took a whole lot of time to complete.  There are thousands of the 5 mm sequins, regularly spaced over the entire surface of the netting over dress. 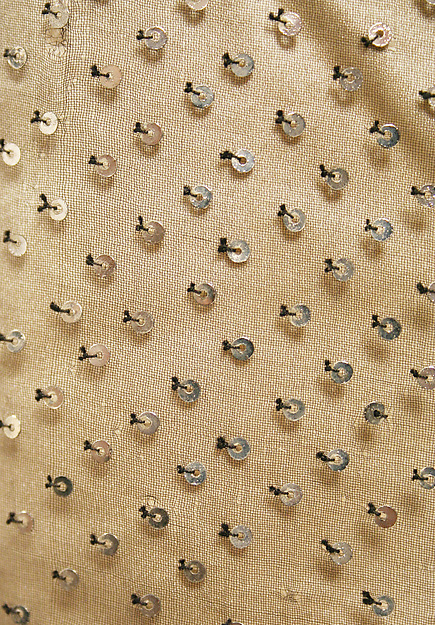 Whew.
Below the pointed black velvet waistband the skirt has vertical bands of silk floss embroidery that match the pattern in the bodice.  These end shortly before the deep band of embroidery at the hem, which is of a different colored floss, and in a different pattern. 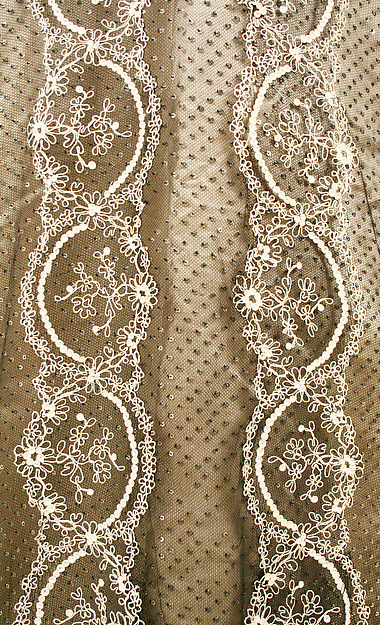 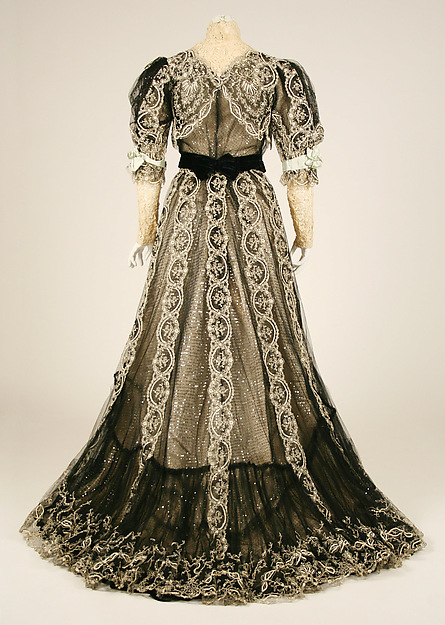 All in all this was a dress for a client who was absolutely certain of her place in society, and of what was expected of her, at a time when correctness was much more important than content, and assertion of station was absolute.  That such a fragile creation has survived in such remarkable condition, means that it was gently worn, and carefully tended.  Surprising too that it wasn't demoted to dress up clothing for the children, at a later date. 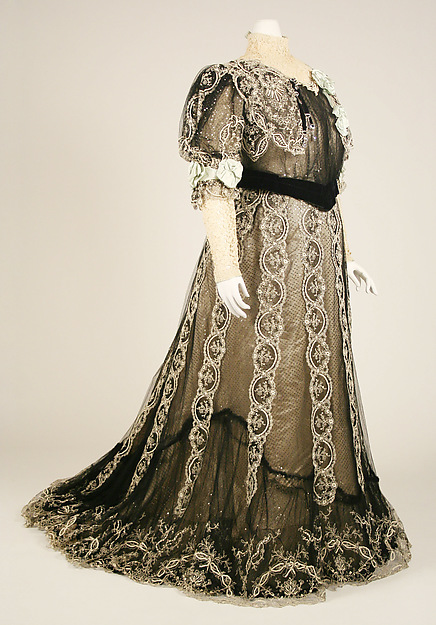 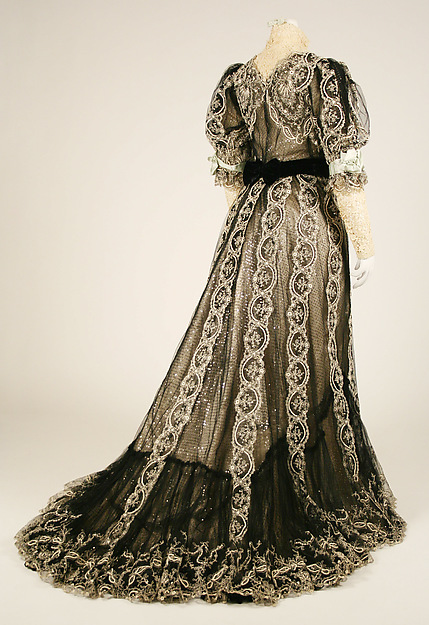 By 1916, just 10 years later, clothing like this will have almost vanished.  Though there would still be luxury, embellishment, and extravagant detail, it would express itself differently, and with considerably less command.
Posted by Paul G. Ellis at 7:47 AM