Well, well, well. Here we are again, staring into the murky recesses of my noggin.  Yep, its that time again.  I've got some interesting things to share this week, so lets go! 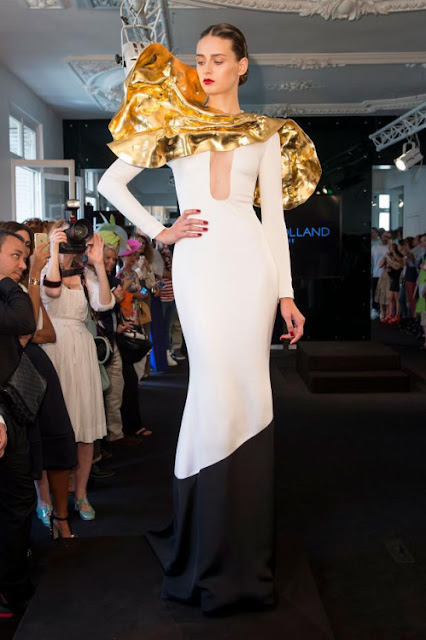 What looks to be part of this white and black evening dress is in fact a piece of jewelry.  The gold plated aluminum piece is a huge sculpture that frames the model's face in the way that a vast hat might on top of her head.  I love the fact that the piece is created to look as though it was caught in mid motion.  You can practically feel a breeze.  As a side note, do I think that's the right garment to pair with that amazing jewelry? Nope.  There are just enough design elements in it to distract from that collar.  Plus, the plunging neckline doesn't help.  I would have preferred something in a single color, even a very dramatic one, with a high neckline.  But none of that stops this collar from being amazing. 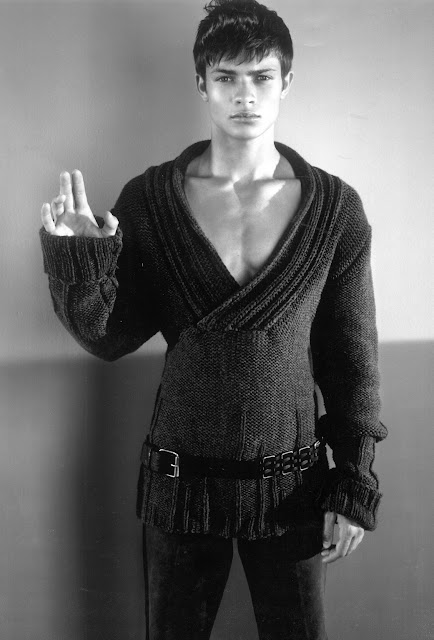 This is one of those design mash ups that I find intriguing.  There are hints of early medieval tunics in the placement of the belt low on the hips, but also whiffs of the 1970s, when belted sweaters were a thing.  The broad expanse of man cleavage, framed by that gathered shawl collar takes it to a sexy place, yet the bulk of the sleeves keeps it from going sleazy.  Its an interesting concept garment, but probably only for someone as young as this model.  I won't be giving this a try, myself. 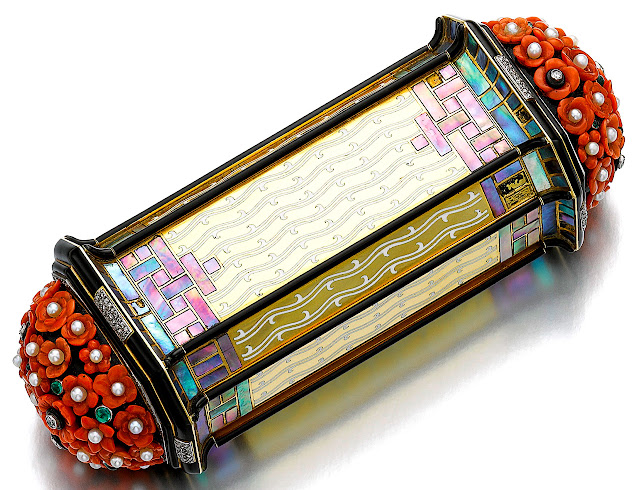 In 1925 Cartier made this remarkable object. Its a vanity case, so it was meant to hold powder, lip rouge, eye liner, and blush.  Its made in gold with extensive inlays of mother of pearl in the Chinese Deco design.  The black enameled bars separate panels of undulating lines in white enamel, and the twinned ends are domed shapes of coral flowers with pearl and diamond centers, and a scattering of emeralds between.  What envious looks the lady who owned this must have gotten in the powder room when she pulled this little item from her bag. 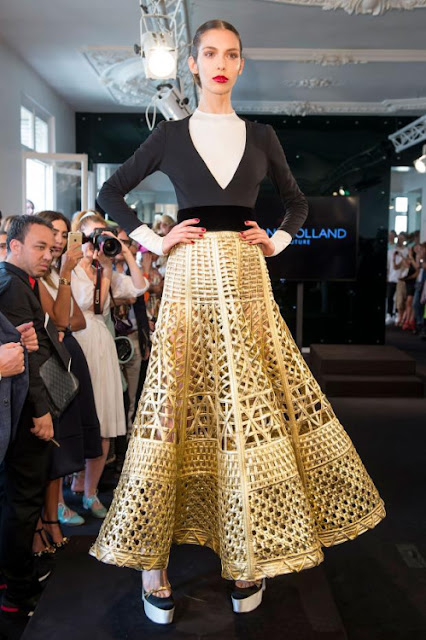 Sometimes its technique that takes center stage.  In this case Rosie Assouline took the classic methods of chair caning, and translated them into this amazing gold skirt.  Trust me when I say there is some pretty impressive math going on here to make this possible.  The doubtless hundreds of yards of gold passementerie strips are perfectly connected and woven. this is masterclass stuff.  And its one of the few times that the see through thing is not only intentional, but appropriate.  Brava! 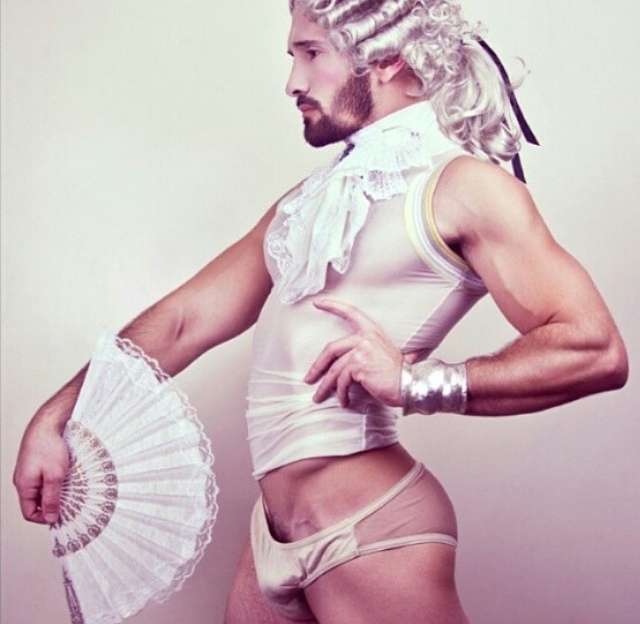 Okay, so this image is a trifle silly, I get that.  But what this brought up for me is how potently this image speaks.  Its the individual apparel words that drive this picture to the destination it gets to.  If not for the combination of elements, from the 18th century styled wig, to the low slung tighties, this would simply be a pretty picture of a pretty man.  But layer the disparate messages of each of these apparel words onto him, and there is instantly a great deal more.  Its a rather absurdist example of what I mean when I talk about the power of the Attire language to communicate. 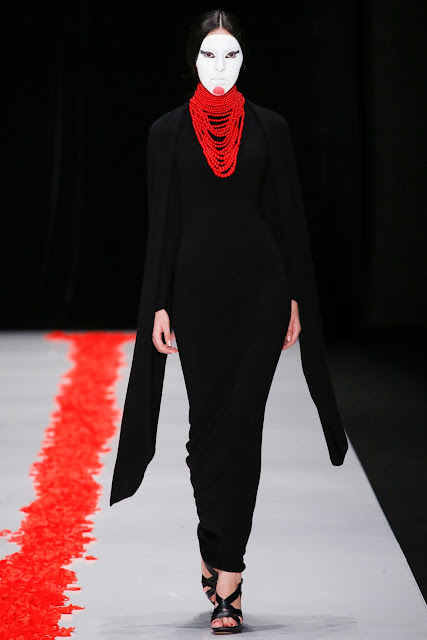 Dimaneu sent this down the runway recently in their nearly all red and black,  profoundly stark collection.  Though in other parts of this collection the white Noh theater inspired make up is jarring and overplayed, here it is the perfect, if operatic finishing touch.  This is an image that is powerful and fascinating in its impact.  The model is an enigma, yet looking away is almost impossible. 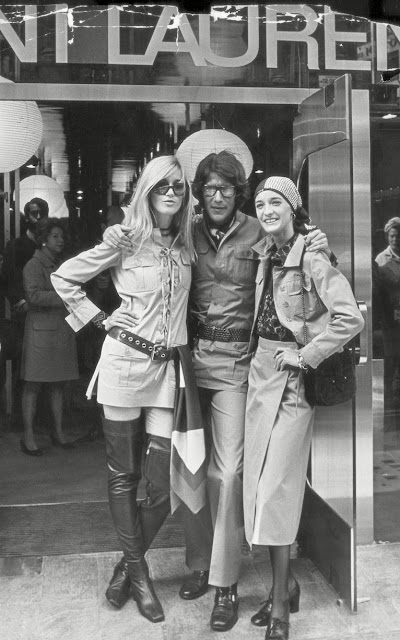 Working your brand is nothing new.  Yves Saint Laurent knew exactly how to forward his work.  He wore it himself.  This picture, taken at his salon in Paris has him with Betty Catroux, who was his principle muse and one of the house models was done in the 70s, right when he produced a collection of safari inspired clothes that was an enormous hit for the house, and was the beginning point of his clothing moving into all levels of production. 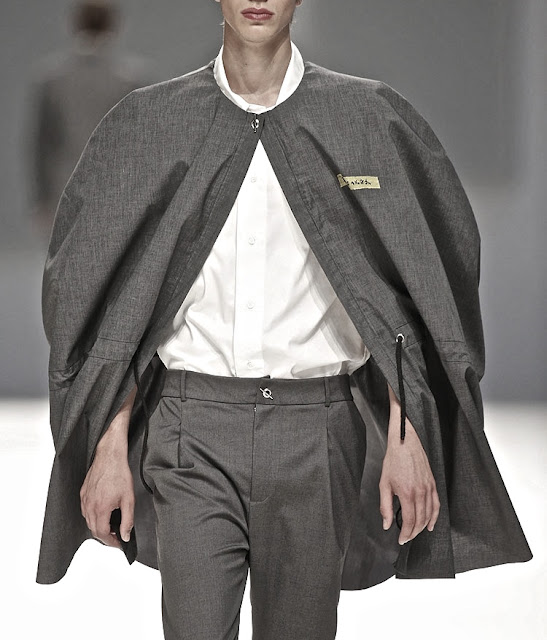 Here's another one of those looks that could easily be classed as gender free.  Isometric put this out for their 2015 Fall/Winter collection.  The pants and shit are of no real note; been there, seen that.  Its that oddly dome shaped cape that kept me coming back to this, and finally resulted in my including it here.  In particular, I want to know what that cape looks like closed, with that drawstring pulled tight and tied.   I would also like to see that same shape and design rendered in another few textiles to see how adaptable it might be. 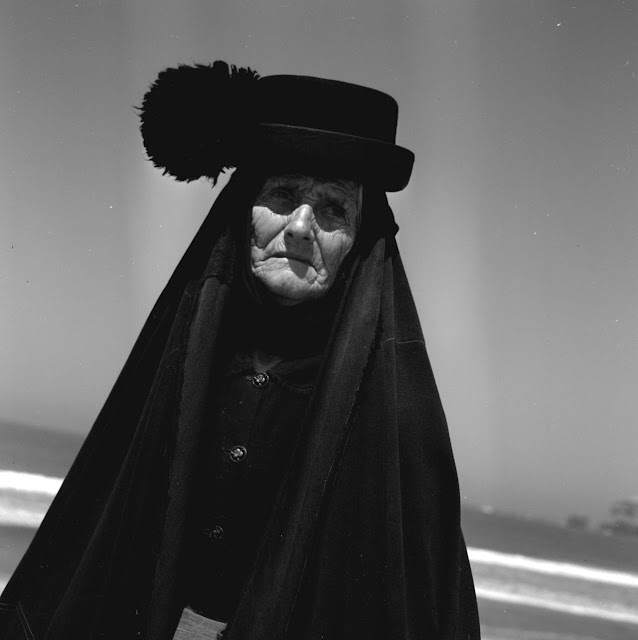 Sometimes an image is so powerful that, even though I don't understand the meaning of the apparel words in play, I am riveted.  This 1954 portrait of a woman was done in Nazare', Portugal.  I do know that she is wearing the traditional Portuguese widow's cape, so that takes us part of the way there.  The severity of the nearly featureless surfaces make her wonderful face stand out so that we are drawn right into her thoughts and emotions.  And, I suppose that is what takes us the rest of the way on our journey with her. 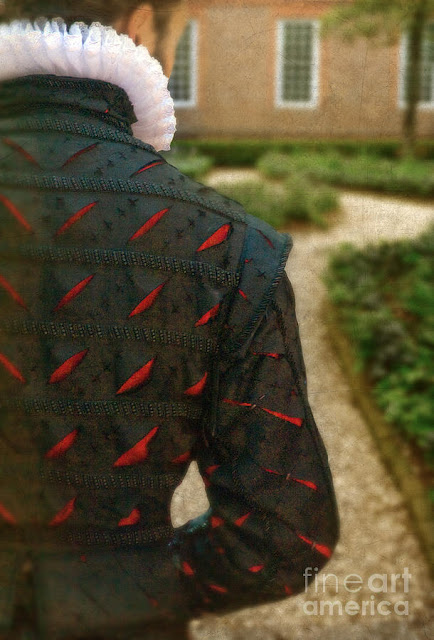 This is a very well done costume, referencing the style points of the Elizabethan period.  In especial the widespread fashion for slashing and pinking is very well rendered here.  Slashing, by cutting regularly spaced slits in the surface fabric was meant to emulate the cuts to their clothing that soldiers got during battle.  Pinking, the smaller cuts dotting the fabrics surface, was meant to copy the breaks created by swordplay.  Modern pinking sheers get their name and purpose from this time and practice.  Tailors and dressmakers had special scissors, with different sorts of shaped teeth, to create pinked cuts, and decorative edges to fabrics.  These days only the zig zag toothed scissors remain in use. 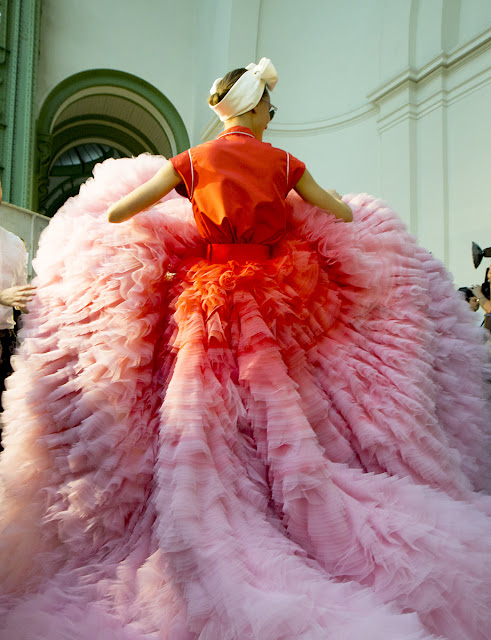 When I clapped eyes on this I gasped at the outrageous amount of material in use here.  There have to be a couple of hundred yards of silk chiffon in this layered, ombre', ruffled skirt.  Of course, such levels of extremity can only exist within the couture.  And I gotta say, pairing it with a 40s inspired head wrap and cap sleeved blouse is cheeky, fun and makes the whole thing considerably less dead serious.  Though the technical skill to create that skirt is jaw dropping. 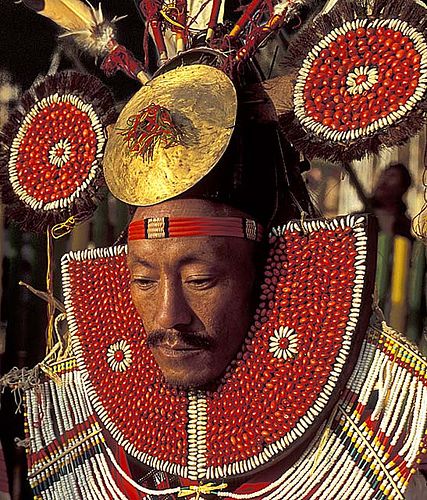 This last entry is another dip into our transformational thing. We love it. We love making ourselves over into something else. We love taking our normal real world persona, and subsuming it beneath layers of iconography.   This is a Naga man, from the Chin state of Mayanmar.  The meanings of all of the elaborate trappings he wears, beautiful and outlandish as they are, are opaque to me, as they would be to most Western viewers.  What we do understand though, is that we are seeing something involving ancient traditions, probable rituals, and likely deep spiritual connections or origins.  So even though we cannot understand all of the message here conveyed, we still get that part that belongs to the universals within us.

Well that does it for this weeks Scatter; so go on out there and have a great weekend!