More than half way through the year already. YIKES.  And oh, by the way, for those of you in the USA, Happy Independence Day.  Go get some potato salad and a burger and watch some fireworks today.

But I have Scattering to do, so let's to it! 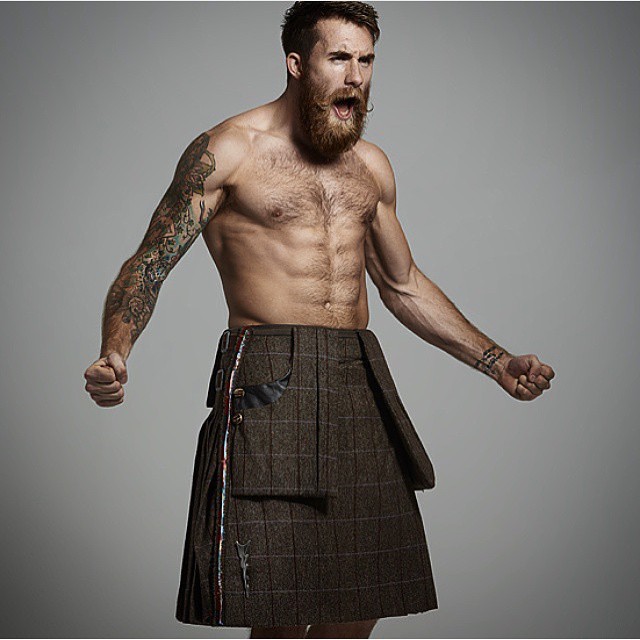 You all know that I wore kilts exclusively for nigh on a decade.  I've moved away from doing that constantly, but I still find the updates on the form interesting, particularly those that include pockets, so that the sporran becomes obsolete.  This one, with its large scale cargo pockets looks hugely practical, and the toned down plaid keeps it from being a direct steal, though it does bear the other traditional elements of structure, the flat apron front, the two side buckles, and the rear placement of all the pleating.  I could happily live with out the rather silly, mock aggressive pose of the model.  We don't need to proof you're a man, dear. 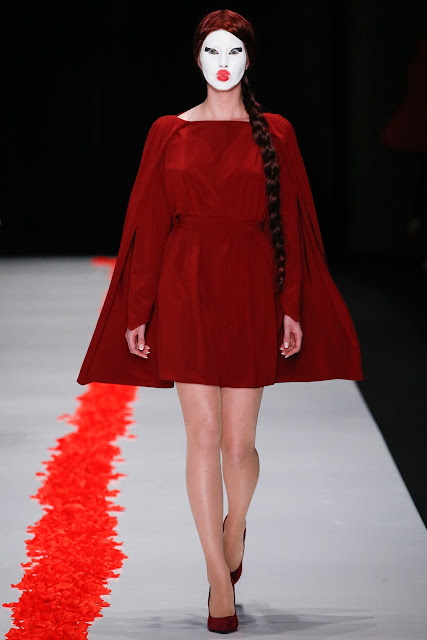 Dimaneu, Fall/Winter 2015 collection.  There are times when I just want to shake the people who create runway styling.  If its so emphatic that you stop noticing the clothes, then its a fail.  The ensemble here is actually a really good one, and is enormously adaptable, both in fabrication and in sizing.  But the stark Kabuki-like makeup is very much at odds here, and pulls the focus from where it needs to be. 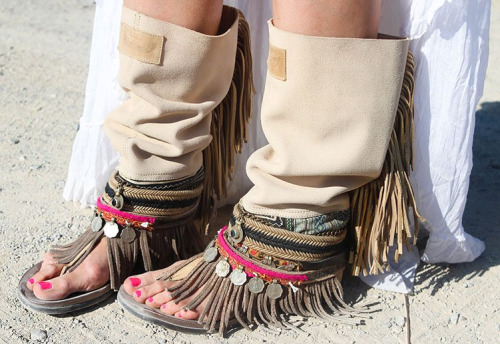 When I saw these, I admit to being puzzled.  But they are undeniably evocative, with the fringes, coins and other elements.  What doesn't quite work for me is the bare expanse above the body of the sandal.  That said, its an interesting take on a footwear conception, mashing up sandals and boots.  Tell me, what could these be worn with? A natural elegance, coupled with spiritual focus.  The dervish tradition of dancing oneself into an ecstatic trance state is helped along by the vast skirts that extend from under the coats Dervishes wear.  They actually perform a real function, helping the dancer to stay balanced and spinning at a constant speed, since the weight and volume of the skirt adds its own momentum to the process.  The featureless white of the ensemble, has only one accessory detail, the slightly conical hat. It is a visually stunning outfit.  And its simple white is a strong psychological indicator of higher purpose, purity of motivation.  Watching Dervishes dance is simply mesmerizing. 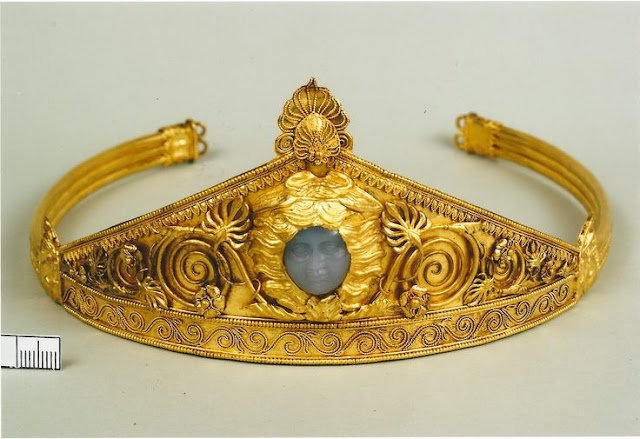 This is called the Scythian Crown,  Found in the Russian Steppes region, it dates from about the 5th century BC.  Surely if you want something to last you make it out of stone, but if you want it to really, really last, metal is the material of choice.  The level of workmanship is extremely high, and the glass medallion in the center front is lovely.  The entire body of the crown is solid gold, and has managed to survive over two millennia, nearly unscathed.  That, in and of itself is remarkable. 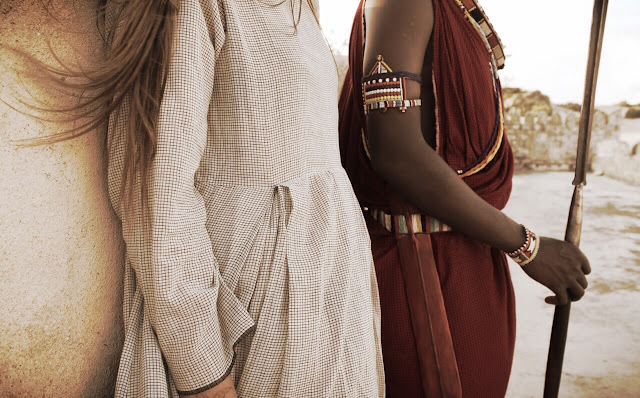 This image, when I came across it instantly made me think of the variations of the Attire language, and yet how they could help us to communicate across cultural boundaries.  We have Western World meeting Tribal Culture, and yet there is a synthesis here, a simplicity which implies connections that could be created.  I muse about such things, often.  The what ifs of Attire.  Sigh. 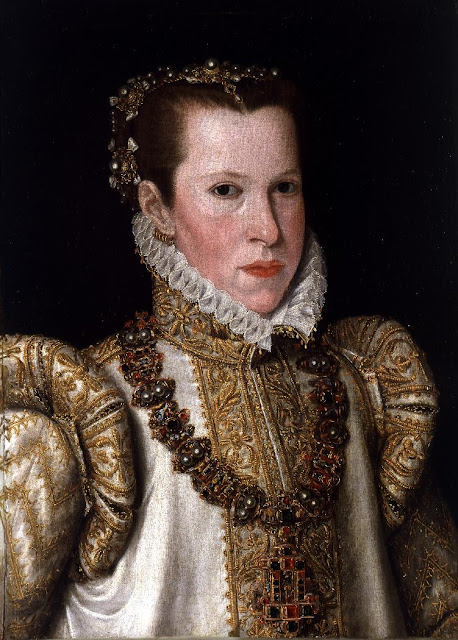 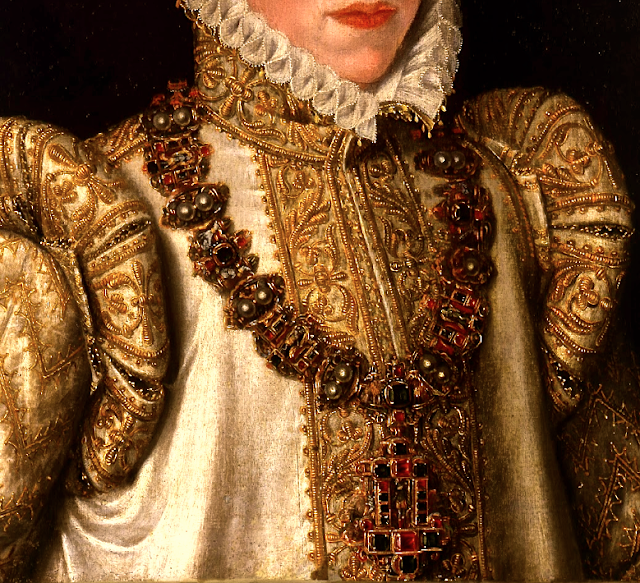 So very often these sorts of royal portraits were far less about depicting the sitter, whoever they may have been, than they were about depicting the power and importance of the throne they occupied.  These images of a portrait by Anthonis Mor of Maria of Portugal, from 1550, displays, especially in its feverish attention to detail, the rigidity, formality, and wealth of the Portuguese court.  Maria is virtually immobilized in the stiffness of her heavy garments.   But then, having armies of servants made immobility a non-issue for such folk.  In fact, it was expected of them. 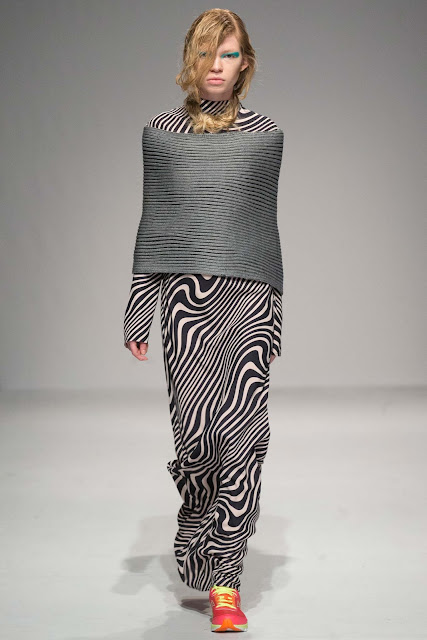 Op Art, re-emerging as apparel.  We had a short lived love affair with it in the 60s, when the Op Art movement spilled over into high end clothing design, creating dazzling, sometimes eye searing patterns that confused the brain about what lay beneath. This effort from DMDV does that admirably.  And though not a thing is revealed, its actually powerfully sexy.  Such strong patterns aren't for everyone, but for those with the moxie, why not? 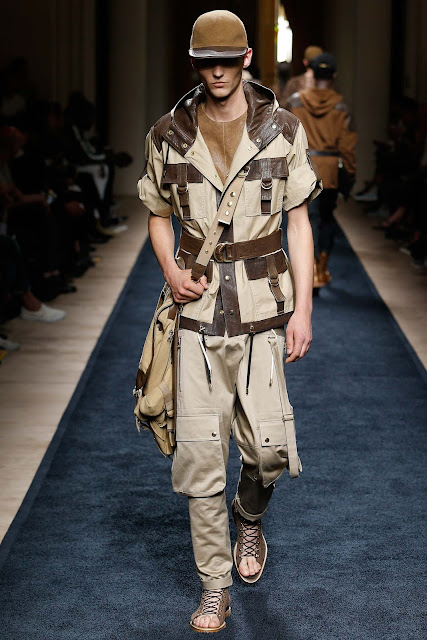 Certain tropes keep getting presented; the adventurer, in this case.  He tramps through steamy jungles, tracks deadly beasts, and remains fearlessly unflappable through it all.  Of course this iteration from Balmain is not intended for trekking any jungle other than an urban one.  And certainly the open fronted boots would be a really foolish choice for any real world adventuring.  But the overall look is great, even if it is a trite. But it is, to an extent a sad commentary that this image of manliness is one we still cling to so strongly.  Fearless hunter, intrepid explorer. A dazzling example of the bead workers craft.  Valentino, Fall/Winter 2015.  It looks like there are 12 panels of bead work on that skirt, each one would have been worked separately, by different workers.  Plus each sleeve, piece, and the bodice panels would all have been worked by another person.  So in the case of this dress, very likely 20 people were involved in the accomplishment of the decoration, before it was shipped back in pieces to Valentino, to be assembled. Wow, just, wow. 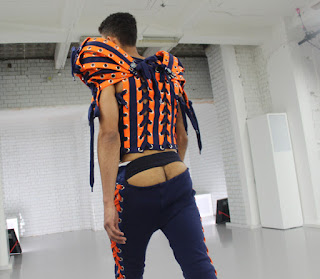 Speaking of recurring, and rather silly tropes, this effort by Sibling from their S?S 2016 menswear collection.  The bound straps jacket clearly gets its shape from American football gear, but as a real world effort, I cannot imagine this anywhere outside of a club.  And the cleavage pants?  I mean, why not, if you've got the bootie for it.  Again though, highly unlikely anywhere but a night club. 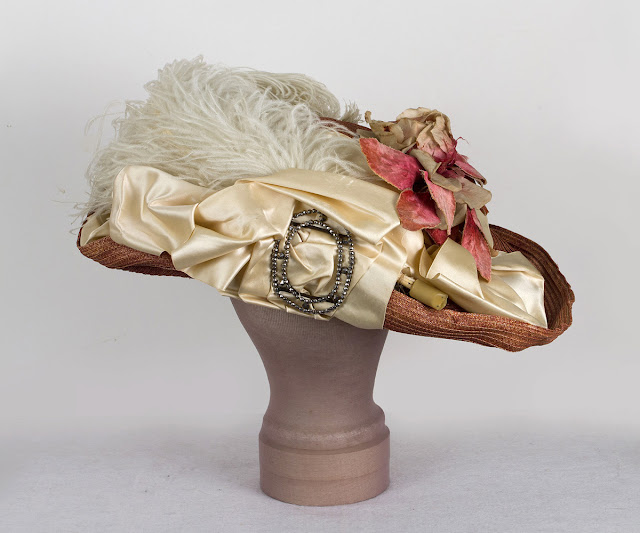 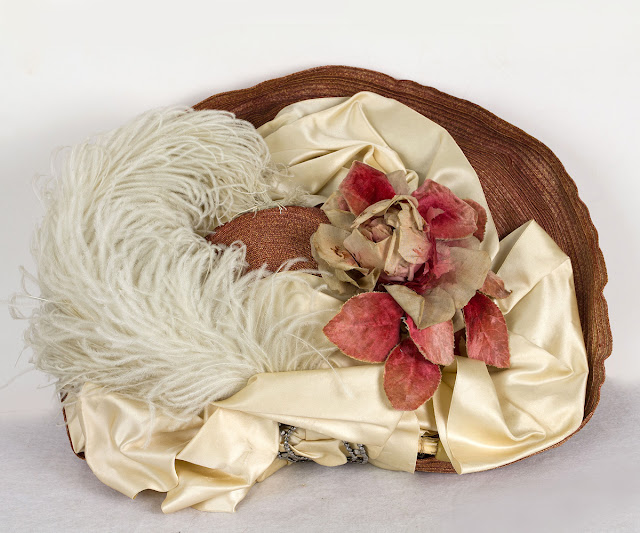 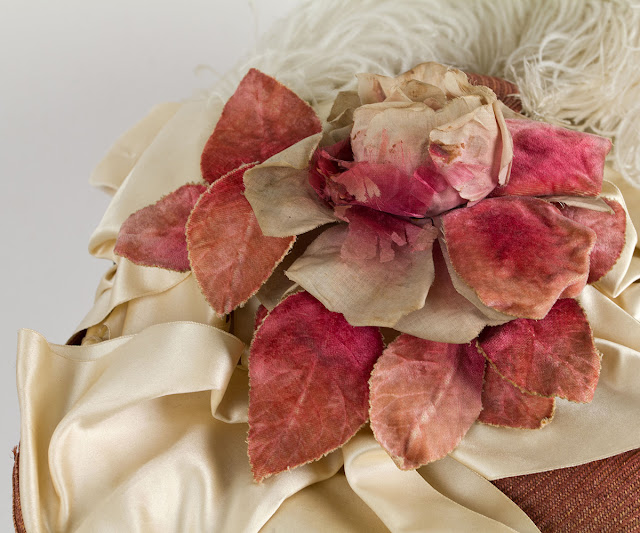 Finally today something lovely form the days when hats were of supreme importance to a lady.  This one is from about 1900.  A wide brimmed straw nicely tuned up and held in place with a huge cut steel buckle, it also sports a gorgeous silk and velvet flower, and a few perfect white ostrich plumes, placed atop some cream colored silk satin.  The brim is nearly 18 inches across, and it would have been worn with the buckle on one side.  Like many, I wish hats would come back.  Oh yes, I do.

Well that does it for this week!   Have a delightful Holiday if you plan to celebrate, and a wonderful weekend in any case.