This week there is such a jam up of gems and jewelry that I thought I would do an all adornments scatter post for this edition.  I just know how you all hate looking at shiny objects, so I will get right to it, shall I? 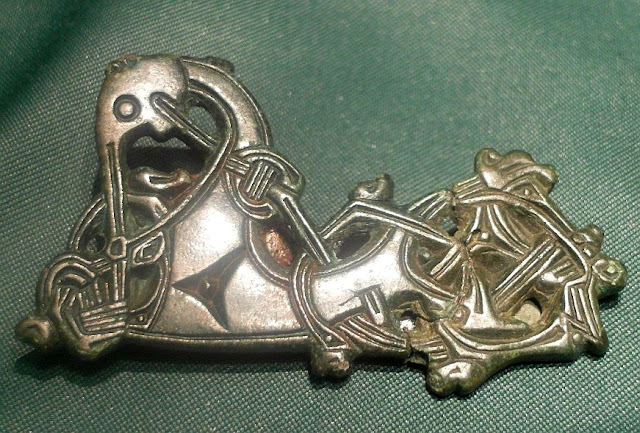 This is a Norse animal brooch from the 9th century, making it over 1200 years old. It was discovered in Vestfold, Norway and represents an unknown, possibly even fantastical animal. The  style of it is pure to the Norse artistic tradition, and it has a vigor in its design that is admirable.  I love the twisting knot-like shapes, so much like the Celtic tradition of the same times.  Amazing find, this. 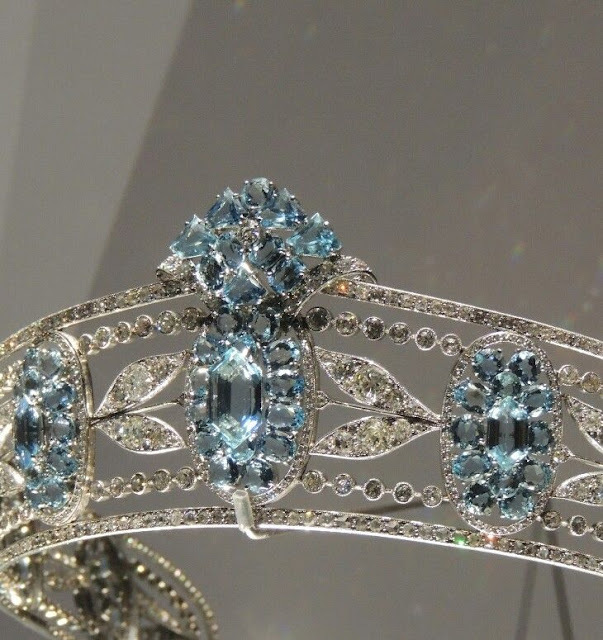 Segueing into something dazzling, a tiara from the firm of Cartier.  Made up in 1930, this Laurel Tiara is on a platinum frame, with antique, and rose cut diamonds, set off by clusters of flawless aquamarines as stylized flowers. Since its from 1930, this would have been worn low across the brow, rather than atop the head, so its classed as a bandeau tiara.

Hamsa is the name of the hand of Fatima, the daughter of the prophet Mohammed. It has become one of the most potent symbols for good fortune in the Islamic world, and also symbolizes faith, patience and power through endurance. Khamsa, is the Islamic word meaning literally, five, as in the five fingered hand.  This beautiful work here is a necklace and a brooch both depicting Fatima's hand as talisman's against difficulty. 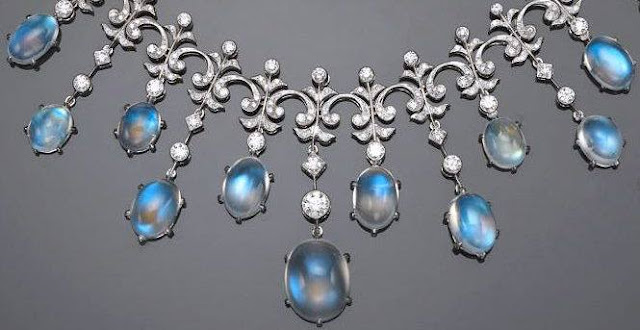 Around 1904, this delicate and glorious necklace was created.  Sadly, its provenance is lost in a morass of pintrest and tumblr postings, so I can't find the maker, or prior owner/s.  It is unique in that very few pieces of high end jewelry employ moonstones in such profusion.  Typically moonstones were used as central focus points in jewelry design, so this is quite a rarity.  These is something almost mesmerizing about how the moonstones deal with light.  Its as though clouds keep moving into view and parting.  Fascinating piece. 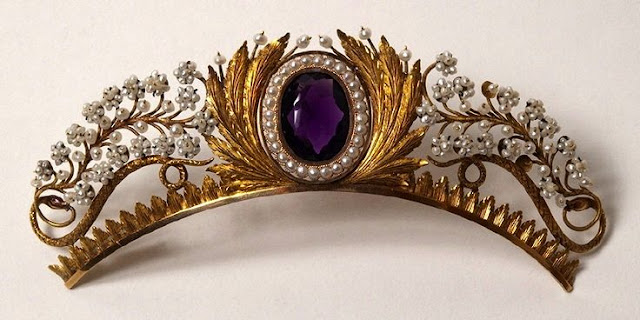 During the first half of the 19th century this grandiloquent tiara was made. In gold, with dozens of pearls forming lily of the valley sprays, and wheat sheaves on either side of the central, perfect amethyst, this might have been a tiara that was meant for the latter stages of mourning, when purple and white could be worn.  Also, wheat sheaves, symbolic of the harvest of time, and lily of the valley, sometimes used as a symbol of the ephemeral nature of life, were images used in mourning jewelry of the time.  That said, this tiara is transitional enough that, worn with other than mourning apparel, it would have been considered appropriate as well. 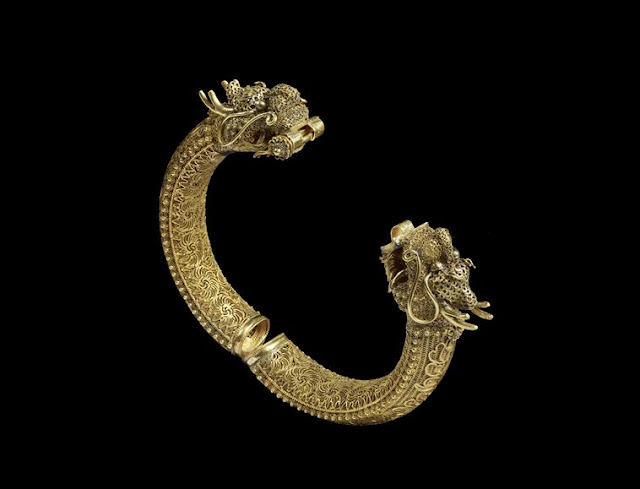 This gold dragon bracelet is a beautiful example of a single people's design aesthetic at work.  You can see the palaces and artwork of Thailand in every bit of this.  The way the dragon heads are rendered, the nature of the filigree work, are precise depictions of the artistic thought process natural to Thailand.  We can learn so much just looking at something like this about how a group of people think and feel.  Plus, this thing is just plain gorgeous. 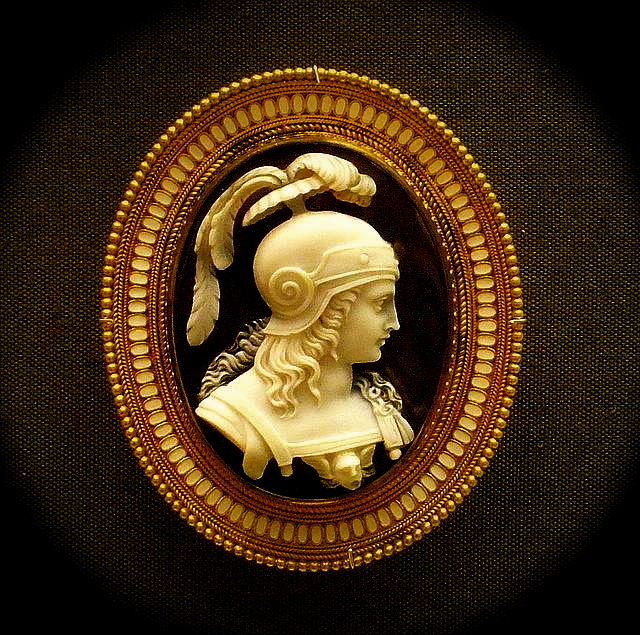 Made in 1860, this onyx cameo brooch is a  splendid example of the highest levels of bas relief carving that can be brought to bear on a small bit of stone. The distinctly classical styling of the gold frame as well as the subject of the cameo, would have made this especially attractive to ladies of a strong romantic bent.  Reading romantic poetry, or working on the latest romantic composer's piece on the piano, this brooch, pinned to milady's blouse or jacket would have completed the picture.

Colloquially known as a service stripe, these sorts of shiny Art deco bracelets were made up for every level of purchase from low to high. This one is of diamonds and pearls in a platinum frame, with a single square, carved emerald.  Service stripe was a rather pejorative term really, since it implied what the lady wearing it had to do to get one.  And of course the more of them one had, the more questionable her morals.  Naturally this less than complimentary connection didn't stop anyone from coveting, and wearing bracelets like this, even if they were just glass stones in pot metal. 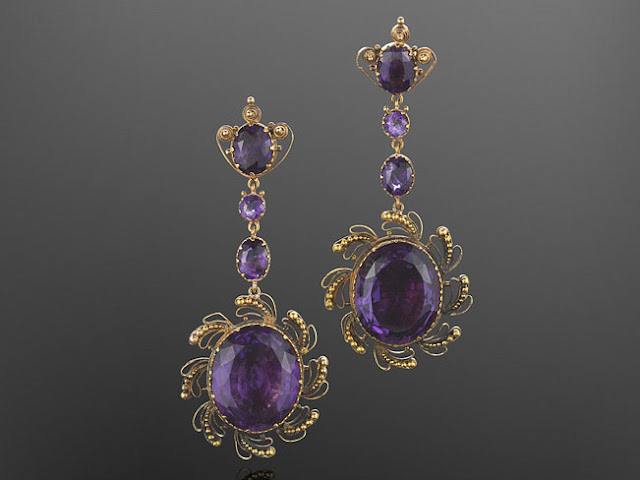 Next to emeralds, my favorite gemstone is the amethyst. This is a pair of Georgian period earrings from 1820, made in England. The cannetille pendant frames are gold.  Similar to filigree work cannetille utilized fine wires and narrow strips of metal to achieve its effects.  I just can't stop staring at that luscious purple.  Call me a color whore, go ahead, I don't mind. 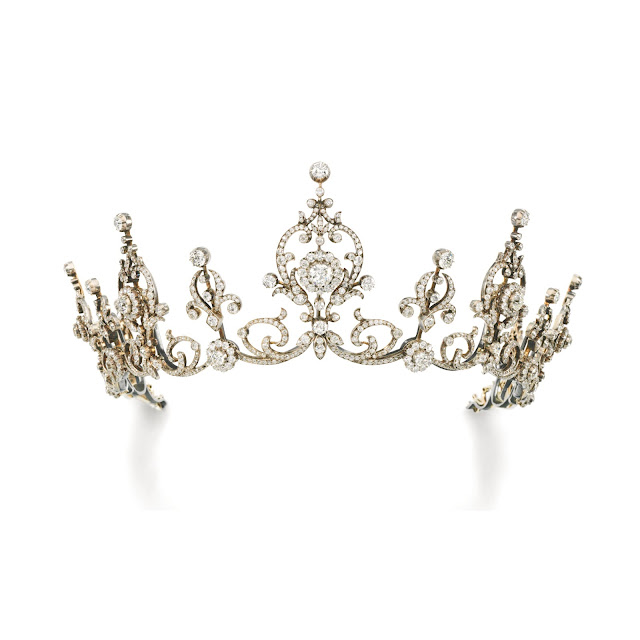 This convertible tiara was made in 1900.  It could be worn as you see here as a hair adornment, or, using the tiny articulations in the frame, used inverted, as a dog collar style necklace.  It would probably ahve been rather uncomfortable as a necklace with the points of the tiara heading down into the base of the neck.  But, beauty is pain, so what do I know?

Meanwhile back at the service stripe counter there's this little number. over 230 center drilled ruby beads, with platinum and diamond spacers, and a platinum and diamond clasp. Whew this must have set daddy, whoever he was, back a few.  I actually find it interesting because the slight irregularity of the ruby beads creates a juxtaposition, perhaps unintended, with the precise lines of the clasp.  Luscious, yes?  Yes. 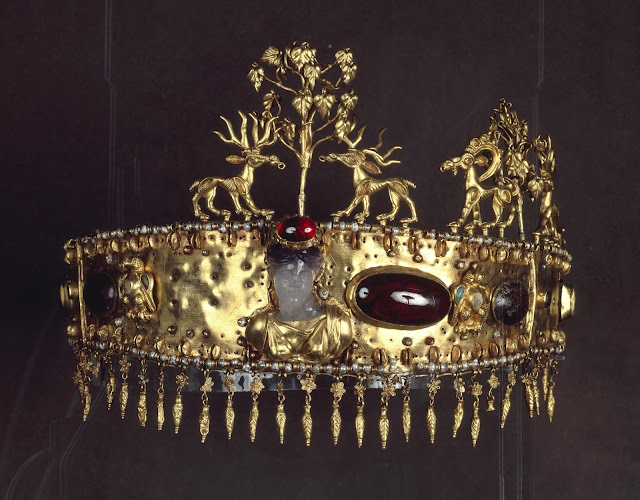 The final piece today is a remarkable find from the Khokhlach Barrow, near Novocherassk, Russia, in the Rostov region.  It was made by people of the Sarmato-Alanian culture, then in residence in that area, around the 1st century AD.  The central face is cast glass, and the diadem bears several precious and semi precious stones including amethyst, almandine, garnet, and turquoise, with pearls and coral as well.  We can credit its amazing condition to its having been hidden in a burial mound for the better part of 2000 years.  Surely, if it had been discovered very much earlier than its 19th century revelation, it would have been broken apart, the pieces sold, and we would never have known of this remarkable thing.

I hope that was enough shiny for you for this week.  Personally my eyes need a rest. (smile)
Enjoy your weekend, all!
Posted by Paul G. Ellis at 4:54 AM