Round and round we go and where we stop, well, you know perfectly well where we stop. The interior of my fevered little brain, for another dip in the Scatterland pool. 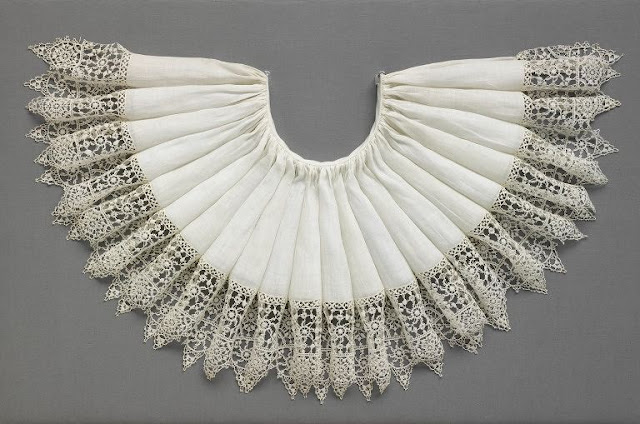 This beautiful ruff collar with a hand worked retticella lace edge is first up. This collar comes from later in the period where ruff were worn, after Elizabeth Ist started wearing her ruff split in the center.  So this collar would've been first, heavily starched, placed over a wire frame called a supportasse, and very likely pinned to the bodice or jerkin at the two front points, to keep it from shifting around.  The main body is of fine cotton lawn, and properly ironed it would have stood out in perfectly even rolls.  It was far more common for a ruff to be of some plain stuff with an edging of lace that otherwise, lace being so very expensive.  Only the most wealthy people could afford an all lace ruff.  That said, considering the width of the retticella lace edge, this was still made for someone with quite a bit of disposable income, or massive unpaid debts.  As a visible symbol of wealth and rank the lace ruff collar is tough to beat. It was frightfully expensive, fragile, easily soiled, and cost a good deal to maintain. 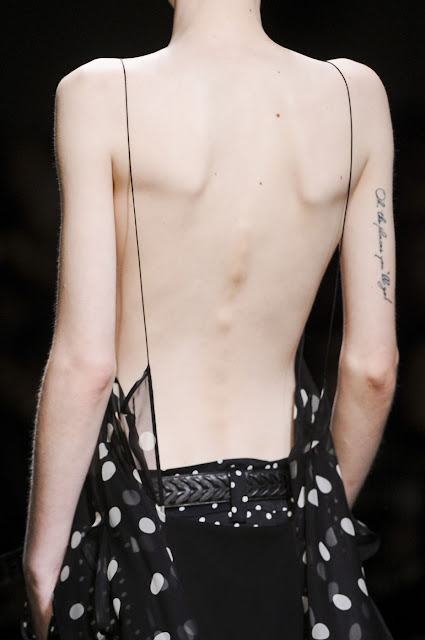 Next up is this detail image of a Haider Ackermann dress from 2013.  What I thought of instantly was, oddly enough, bridges, and the tension of cables supporting a road bed.  The same principles of load bearing and stress are in play here, even though the designer probably never gave it a thought consciously.  Its easy to imagine the chiffon structure of the dress front swaying gracefully with every movement as the narrow cord straps adjust to differences in body position.  Apart from the body con aspect of this, it must be damned sexy in motion.  I do love the interface of fashion, engineering, and architecture, which this most certainly is. 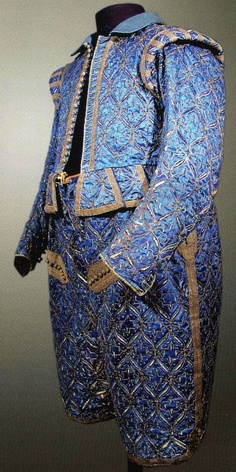 This man's suit is from the point shortly before the doublet disappeared for good, the 1650s.  The peascod belly doublet, with its strange protuberance over the lower abdomen is gone, the waist has ascended to just under the ribcage, the codpiece has vanished, and the shape of the breeches is taking on the leg of lamb shape it will have for the next decade.  Within the next 30 years, the doublet is gone, to be replaced by the first iteration of the suit that we are still seeing now.  At first the doublet will retreat under a coat, becoming the sleeved waistcoat, then it loses its sleeves and is gone forever. 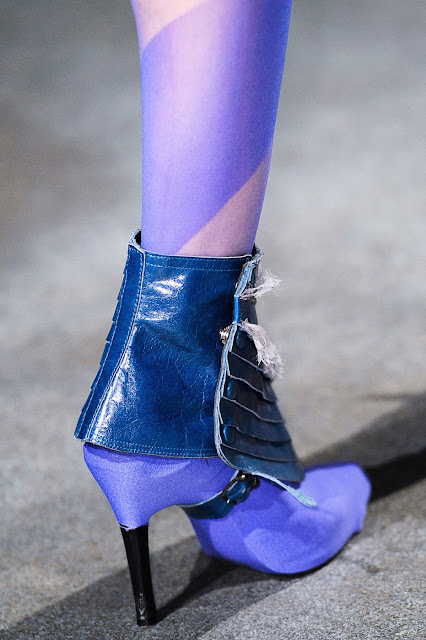 Spats.  Now here's a word that has nearly vanished from the modern Attire language.  And I have to ask myself why.  They perform two functions, which is already a good thing.  They can offer protection to expensive shoes, and, as here, they can be an evocative accessory that adds to the whole visual composition in play.  I'd love to see spats make a return, and I think they could. It will only take the right combination of styling and presentation to get people to take note.  In fact, spats could become the DIY project of choice for many.  Its a small amount of materials, a bit of velcro, and your good to go.   Hmmmmmm, maybe I will have to give it a go my own self. 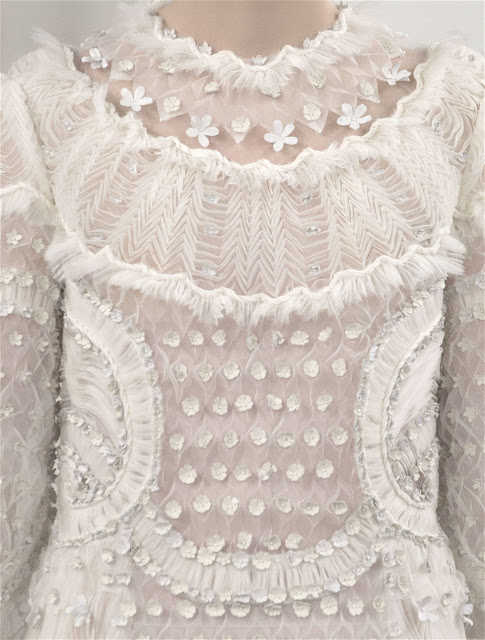 When I caught sight of this Valentino detail image my head started to hurt, and I got a serious case of couture envy.  Both the headache and the envy stem from the truly astounding level of skill on display here.  Its tough enough to work with fragile fabrics like chiffon, that love to slip and slide everywhere, and literally move if you breathe too hard, but to manipulate a textile like that in this many ways is absolute tour de force skill.  The white silk chiffon here has been tucked, shirred, pleated, smocked, and ruffled.  Only after all that did it get silk flowers embroidered in it.  I am in awe.  I bow to the people responsible for this bit of amazement. 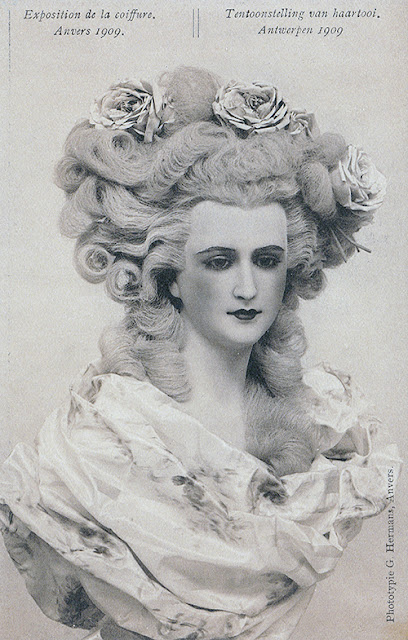 In 1909, at Nancy, in France was the Exposition Internationale de l'Est de la France, which included among the exhibits a display of the different hair dress styles of history. Using wax portrait busts, the human hair wigs were carefully dressed to accurately as possible recreate what was the fashion at various times.  This image is of a coiffure that was fashionable at the very end of the 18th century, just before the French Revolution.  In reality such a style would have been composed of both the wearer's own hair and masses of false hair, which was quite often, horse hair. 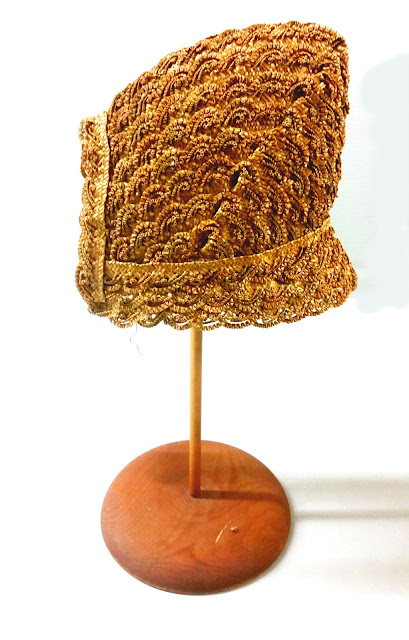 Charming is the word that leapt to mind instantly.  Its a child's bonnet from the 1800's.  The way the straw is plaited in those repeating arcs is amazing.  And a piece like this would have been sturdy enough to get used by successive children and probably get passed to a daughter for her kids.  The poke bonnet style was prevalent for many decades in children's clothing, so its impossible to date with any accuracy. Most likely, though, it was made between 1830 and 1870. 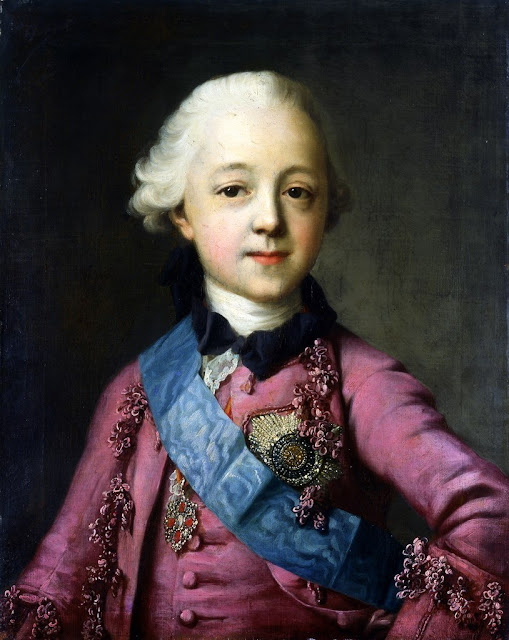 In 1764 Virgilius Eriksen painted this charming portrait of the then Grand Duke Paul, son of Catherine the Great, who went on to become Emperor Paul I of Russia in 1796.  At the time this was painted he was 10 years old.  What has always intrigued me about paintings of this sort, is how they show that children were not treated in any way differently in their manner of dress.  Young Paul is here attired in everything that would accompany an adult male of high status.  The suit, shirt, cravat, and powdered hair are all entirely correct, as well as the sash, and the various order badges he is wearing. The large badge over his left breast is the Order of St Catherine.  I also love that the powdered hair makes his age oddly indeterminate. He could be anywhere from 10 to 40.  Emperor Paul I reigned only 5 years, from 1796 to 1801, when he was assassinated. 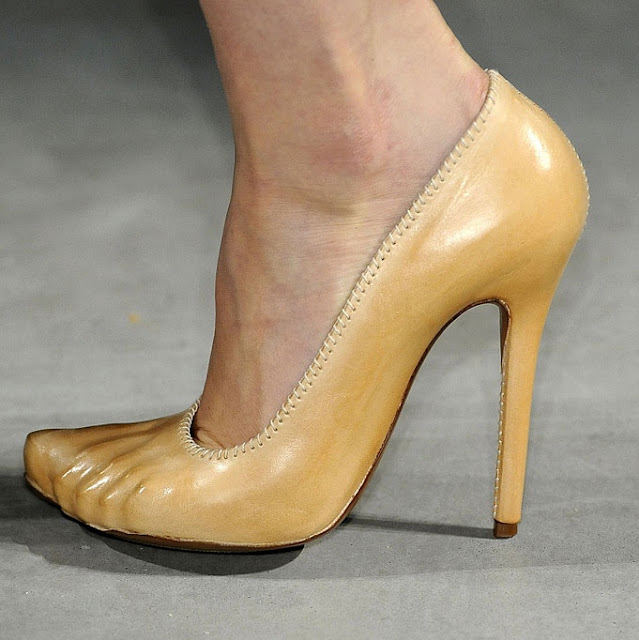 Oh, but I do love surrealism, especially when, like this, it's a bit discomfiting.  This is a close up of a shoe used in the Alexander McQueen F/W 2009 collection, and though there were other versions of this shoe in the show, this one is the most disturbing looking, since its so close to a skin color.  That disturbance is helped along by the heavy outer stitching that calls to mind sutures, and Frankenstein monsters. 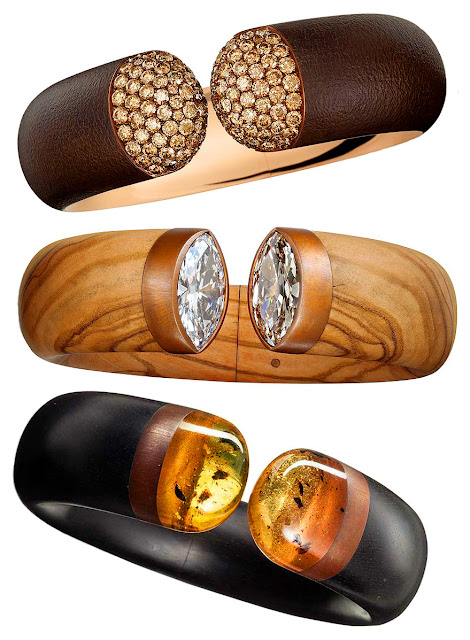 Jewelry, just like any other aspect of the Attire language, changes and develops new expressions to adapt it to changes in our society, and our view of ourselves.  These three bangle bracelets were designed by Hemmerle and are entirely of this time.  The top one is copper and gold, with the currently popular brown diamonds.  The middle bangle is olive wood, with diamonds mounted in copper rings.  And the bottom bracelet is ebony wood, with cooper banding holding amber pieces.  The spare nature of these, coupled with the use of copper and wood place them squarely in our current day.  Years from now, someone will be able to look at these, without knowing anything of them, and place them in time. 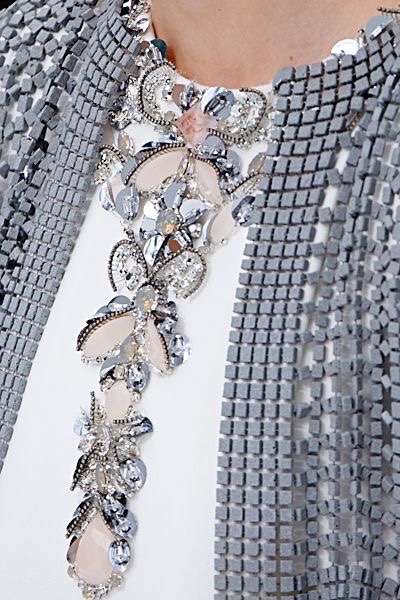 One of the things that will mark couture clothing from this time is the scale of the embellishment work. In particular the use of very large scale rhinestones will mark this time.  Its a visual example of the need we have of late to up the ante in all sorts of ways to get and hold attention in our overstimulated world.  Also, I think the jacket made entirely of cubed beads is kinda awesome.

And finishing the Scatter for this week is this jaw dropping example of the thirst for power, and the desire to make sure that no one is in doubt of its presence in the room.  In 1713, jeweler/artisan Matteo Treglia designed and created this bishop's mitre for the bishop of the San Gennaro cathedral in Naples, Italy.  Its not made of material, its gold, heavily embossed with scrolling vines, and decorated with dozens of rubies and emeralds.  There is also a narrow padded velvet band to cushion the head that runs round the base.  There would be no chance of misunderstanding who held the reins of power when this accessory was in use.  And that is entirely the point.  The absolute power of the Catholic church, through the person of the bishop, made manifest in metal and gemstones.

That rounds it up for this week's Scatter, now get out there and have a great weekend!