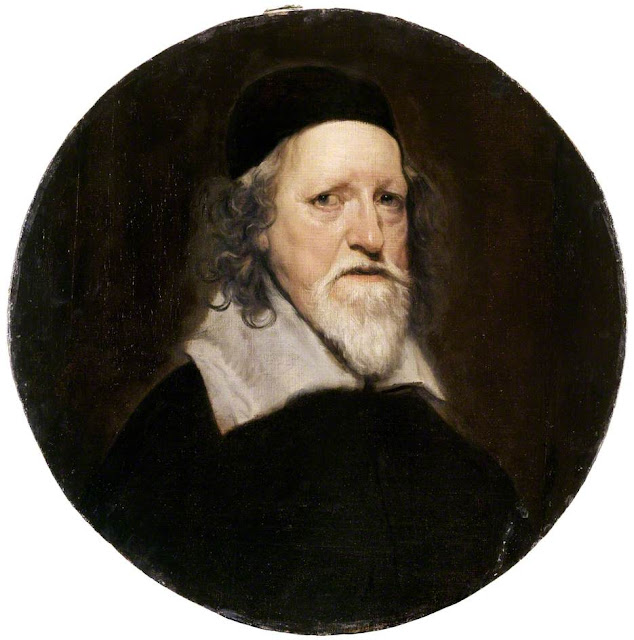 Overlapping from the 16th century into the 17th, the career of English architect and designer Inigo Jones is primarily remembered for his Vitruvian influenced buildings in and around London, most of which still stand, and formed a base line for a great deal of work to come later on.  What he is less known for are the extravagant and amazing masque costumes that he created, mostly by royal command, for the numerous masques being held a t court at the time.  The modern conception of a costume ball or party is the descendant of these court productions, which were part theatrical performance, part dance, and part feast. 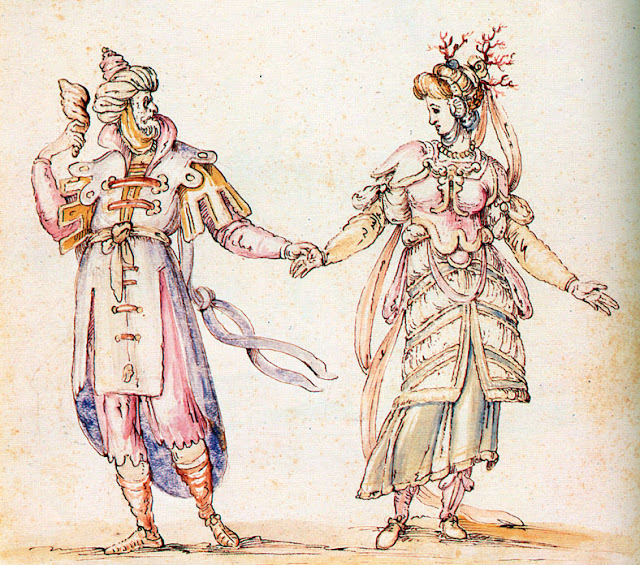 The reason I bring this up at all is as an example of the extremity of symbolism that is possible within the Attire language when it is intentionally done. Sadly, all but the most superficial of the symbols present in his work are faded from our knowledge, since so many of those symbolic references were unique to their time and place.  And its true too that it was commonplace for these fantastical characters to be announced so that viewers had a clearer understanding of what they were viewing.  So, even for them, these were densely packed with meaning, and took time and good observational skills to pick apart. 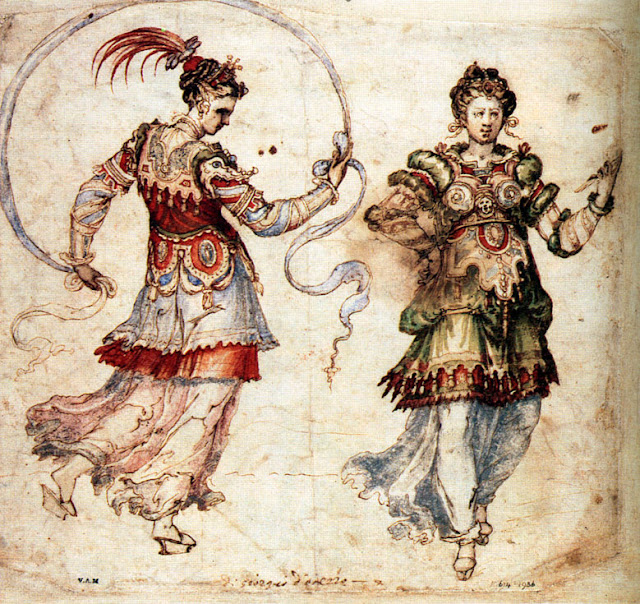 Mixing contemporary clothing styles and silhouettes, with a wild array of real and imagined apparel ideas from other cultures and times, his costumes conveyed an otherworldly feel to the viewer. As well, rules of propriety were significantly relaxed, allowing bare breasted looks, and cross dressing for both genders.  Its a splendid series of examples of how much we will endure to transform ourselves into something other.  Its also a unique look at the level of detail, and the amount of cash that was routinely leveled at these events.  The sketches you are looking at would have been made up in the best of materials, with tremendous attention to the details. 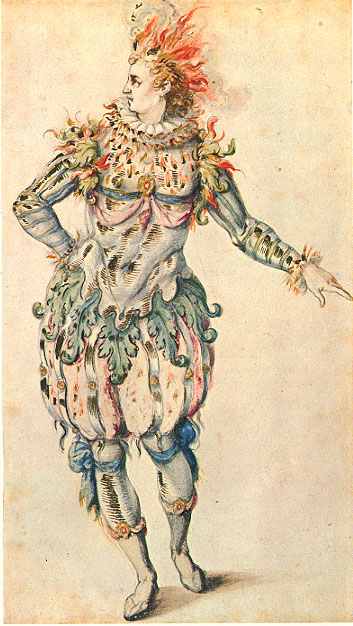 This costume is meant to represent a star.  To our eyes there is little if anything to imply that, beyond the flame like bits about the head. 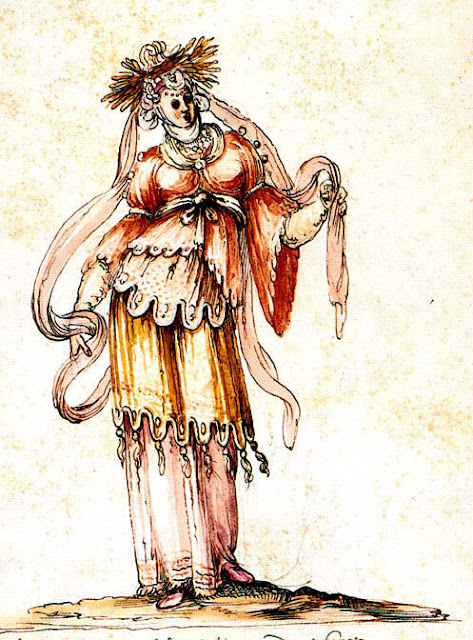 And this costume, from the La Pellegrina masque is meant to be a muse.  Though the relative softness of the design could imply the classical toga or chiton, I'm at a loss to define which of the 9 muses this is meant to be. 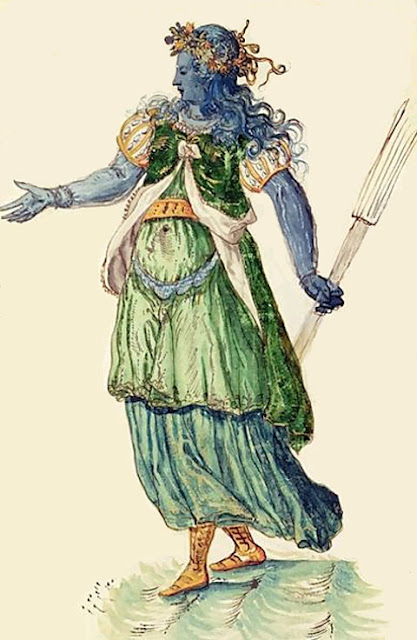 With the blue skin, and the green tones of the costume, that this is Oceania is easier to get on one look, though the other symbolic references in her headdress for example, are opaque to us.  Interestingly, this costume comes from a production called "The Masque of Blackness".
Though many of Jones' sketches remain, few of them tell us precisely what was intended, so we are left with a series of tiny mysteries, each one lovely, in its own way, and full of information to give us that we may never decode. 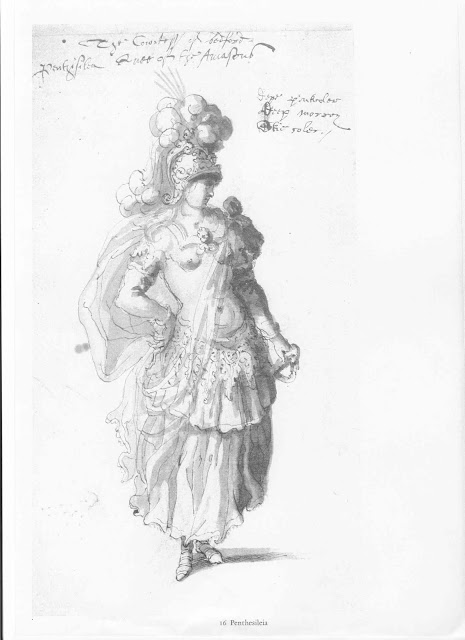 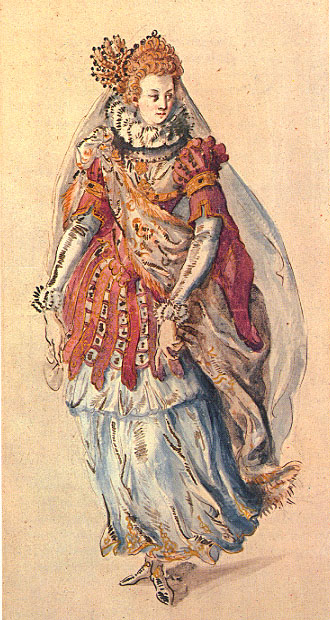 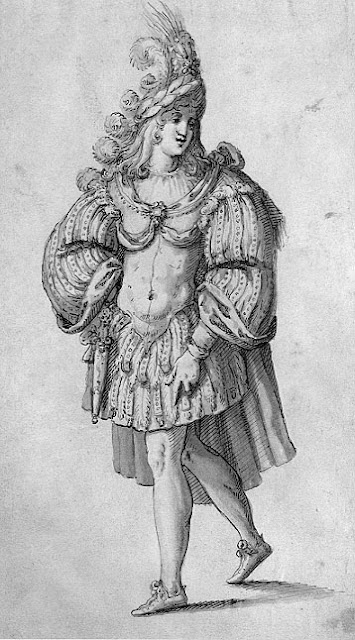 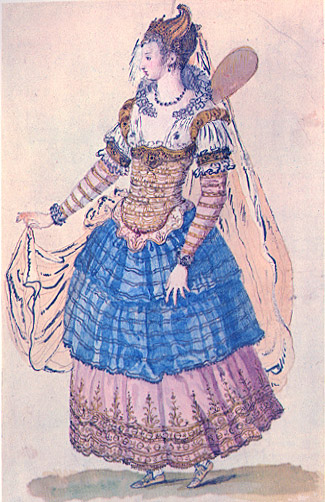 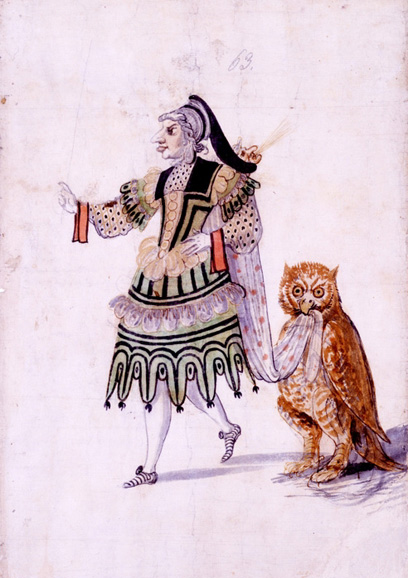