Dang these weeks are zipping past me of late.  I seems that no sooner do I post the Scatter, its time to assemble another one.
But, with that, Onward! 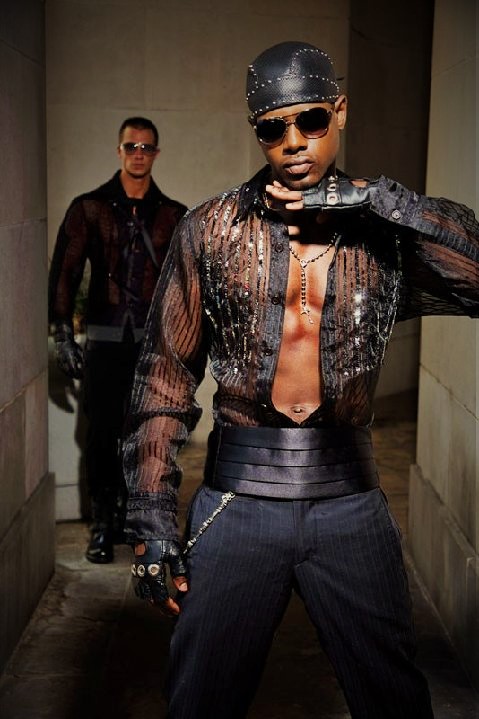 First up today.  Its pretty evident that the designer's intention here is to give us a hot steaming helping of overtly sexy, with a big side dish of dangerous.  And that's great.  Surely the real reason this look works at all is because of the model, who knows exactly how to work it.   In terms of the individual words being employed here, there's a lot being communicated, and a good deal of it is at odds, which is part of why we get a danger feel from it.  There's a visual tension created between the lower half of the body, which is pretty classic formal menswear stuff, and the upper body where we are getting full on glitzy gangsta.  Pinstriped pants, and a cummerbund on the bottom, then a sheer striped and sequined shirt, fingerless gloves and a studded leather skull cap, all working to create a sense of edge, sexual dominance, and lack of acknowledgement of authority.  Outside of a club situation, I can't imagine where that shirt would really work, but what do I know? 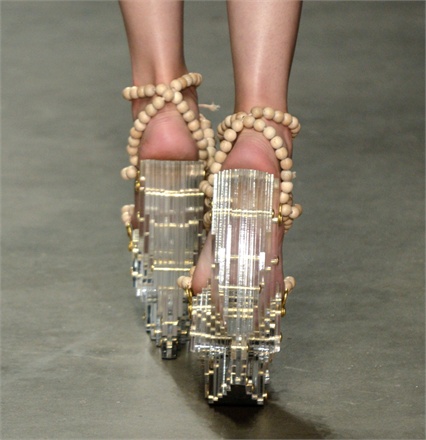 Winde Reinstra designed these to be worn for one of her collections.  The Netherlands based designer is known for her avant garde approach, and her love of sharp edged, often crystalline looking forms that appear in her work in all manner of iterations.  These platforms are constructed of lucite crystals that are joined with metal rods passing through them.  Comfortable?  Probably not.  A profound visual remark? Absolutely, and wearable art, as well.  Go, Winde, Go! 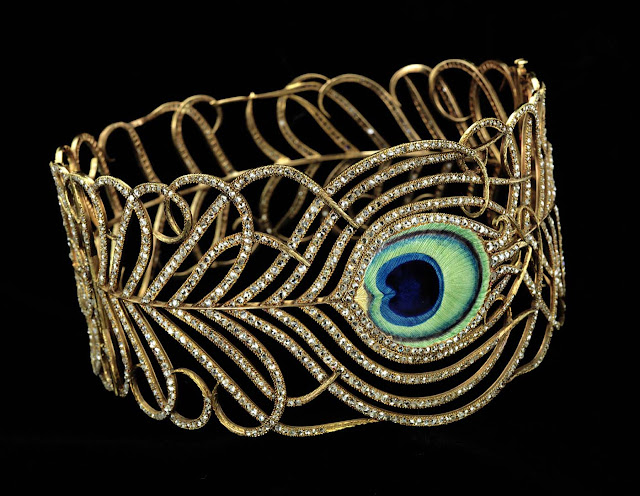 In roughly 1900 Mellerio Dits Meller fashioned this wonderful choker.  The inclusion of the perfectly rendered enamel peacock feather eye in the design is what makes this something really special.  The marriage of the natural seeming, and the created, both in harmony to make the feather eternalized, take it to a different place of beauty, and also turn it into an item of fantasy.  A wonderful Art Nouveau piece with a delicious integral design. 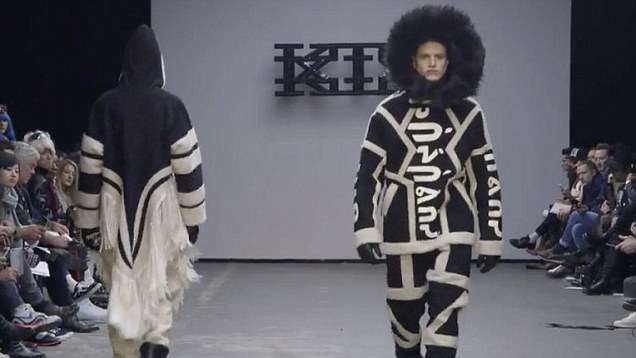 Design firm KEZ, who recently took part in the Agender department pop up at Selfridge's in London, has a firm commitment to an avant garde approach.  These two, ostensibly menswear looks jump all over the place with their multiple disparate cultural references.  But the overall expression conveyed remains harmonious.  I particularly like the fringed coat.  The balance and movement are terrific.  the forward facing design seems a trifle over-thought, too many things going on for my taste. Remove the text like shapes in the center, and I'm fine with it. 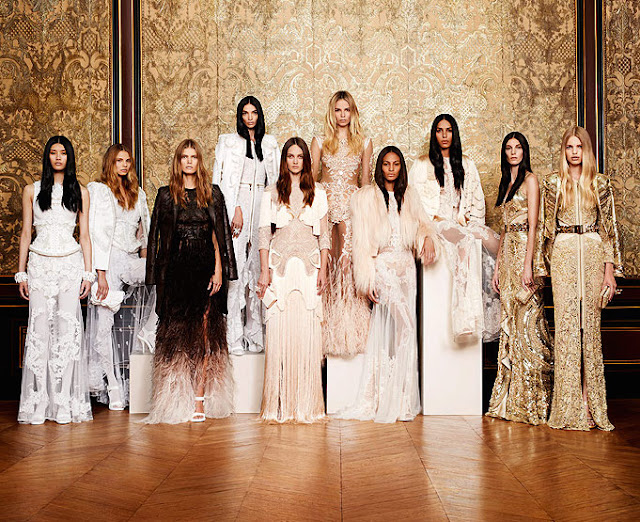 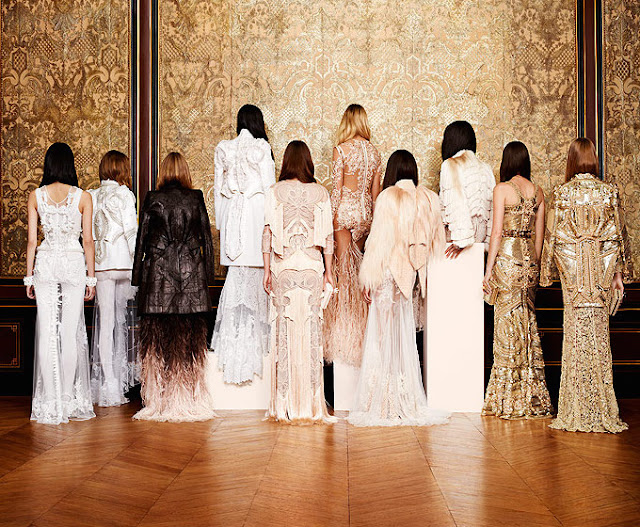 Houses don't all that often do collection shots where you can see the concept fully.  These two images are from the Givenchy F/W collection for 2010.  Viewed in a cluster like this its much easier to delineate the various ideas being presented.  Take a good look and see what you can come up with.  There's a number of things in play here. 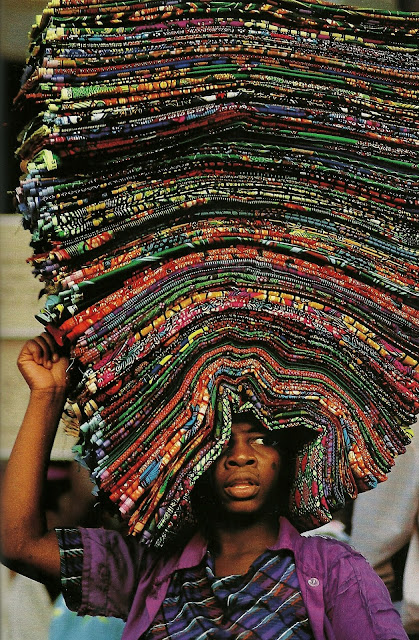 An advance apology if I'm getting a mite preachy.  We, most of us, me included, don't spend all that much time considered the hidden costs that appertain to the ready availability of endless numbers, and types of garments, and accessories.  Its well that we pause now and then to recall, who, and how many spend their lives in toil, so that you and I can shop at H&M for cheap trendy clothes.  Sure, not everyone who works in a clothing factory somewhere is maltreated.  But a huge portion of them are.  And all the corollary folks who take part in the process, they too have burdens, often unacknowledged.  Jus' sayin'. 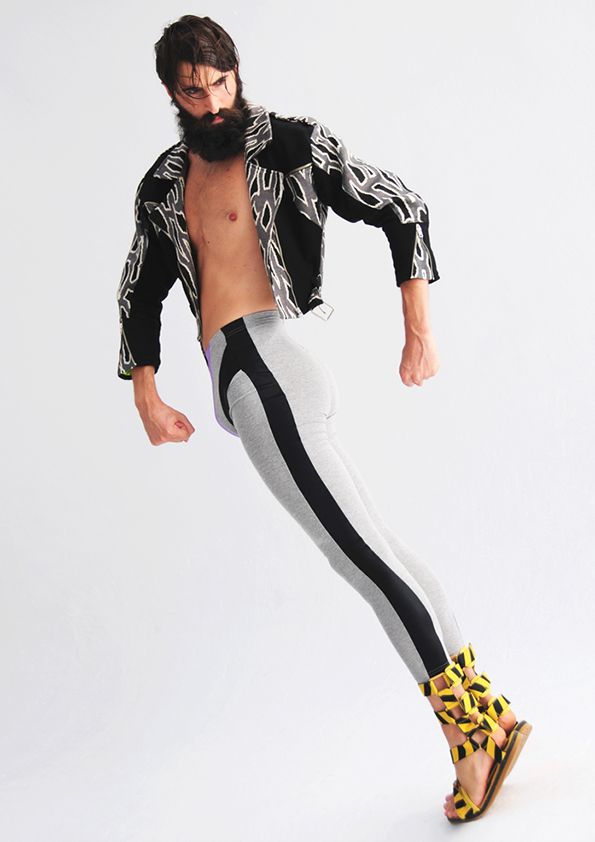 When I saw this I thought, hmmm, is spandex making a comeback?  Then when I saw how the stripe on the tights was positioned, I started recalling the old mail order catalogs for gay men that sold more frankly provocative clothing than was found in shops.  Gotta say, I rather like the caution tape sandals, and the jacket is pretty cool, too.  Spandex, however should be employed with extreme caution.  Mister man here, gets away with it, naturally: but a lot of us?  Not so much.

I've written about the power of color before many times.  This really struck me though. Rising from nearly black at the hem, the color slowly, steadily intensifies, till that brilliant red takes over.  Its like looking at the mercury in a thermometer go up.  There is a palpable heat that this conveys, which is helped along with that rather kinky looking bustier.  Its fascinating that as your eye goes from top to bottom, or bottom to top, the feeling you get subtly shifts, fading, or strengthening, depending on direction of view. 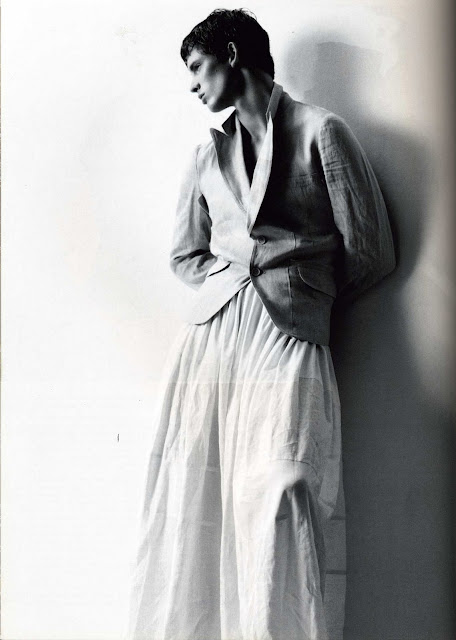 I really like this look a lot.  Of course, partly because of the man skirt thing, but there is a simple easiness to this that I think could translate effectively into real world usage.   Certainly skirts for men in western culture are continuing to gain ground, so this has much less edge than it would have 10 years back. And the choice of material, unpressed white cotton shirting, gives this a kind of slouchy, "I'm a dude who doesn't care much about clothes" feel to it, where a more formal material would have made this less accessible. 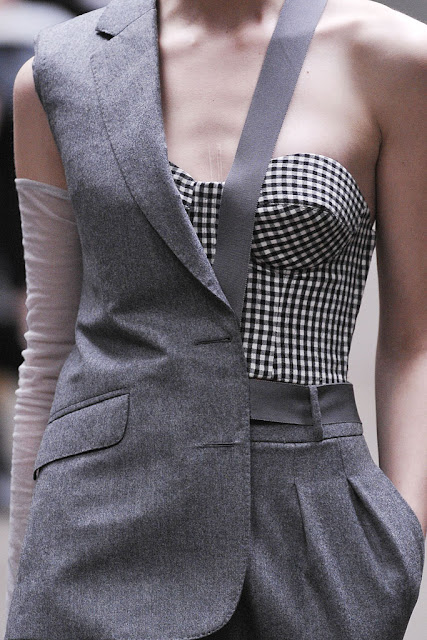 To me, this effort by Richard Nicoll is less about wearability, and more about making a social comment.  As a garment that half jacket is ultimately an absurdity, with not functionality in real world terms, but if you want to look at this more closely, there is an attempt at commenting on gender roles being made.  Do I think its entirely successful? No, I don't there is something I can't put down precisely that seems off.  Perhaps if the strap, which is obviously there to keep the half jacket from falling open, went round the waist, instead of over the shoulder, it would be more cohesive. 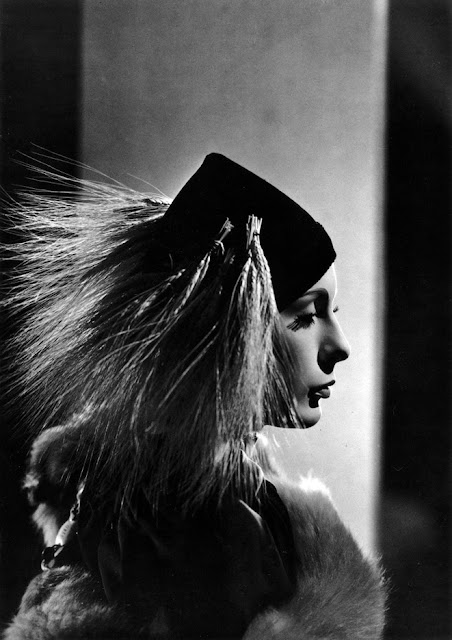 George Hoyningen-Huene shot this in the 1940s.  Its a simple cone shaped cap, with bunches of Egret plumes on it.  Of course its illegal to harvest egret now, but in the day, such plumage was pretty commonplace among the stylish set. This one though, with multiple bunches of feathers, must've been mighty pricey.  The juxtaposition of the smoothly featureless felt hat body, and the roughly tied bunches of feathers makes this a dramatic expression, only heightened by the strong lighting, and serious look of the model. 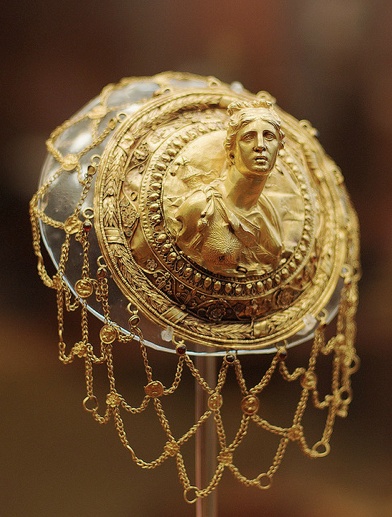 Last up today, something from the 3rd century BC, in Greece.  This golden object is actually a hairnet.  The cap structure has a bas relief of Atremis with her quiver of arrows.  The gold chain net is decorated with cabochon garnets.  It must have required quite a few hair pins to hold that heavy a thing in place on the head.  And looking at this makes me wonder what other things the lady had on when she wore thing marvelous thing.

Well, that's it for this edition.

Have a wonderful weekend!
Posted by Paul G. Ellis at 4:26 AM