Happy Saturday, All!  Its time for one of my favorite things of the week.
Scattertime!
Let's get cracking. 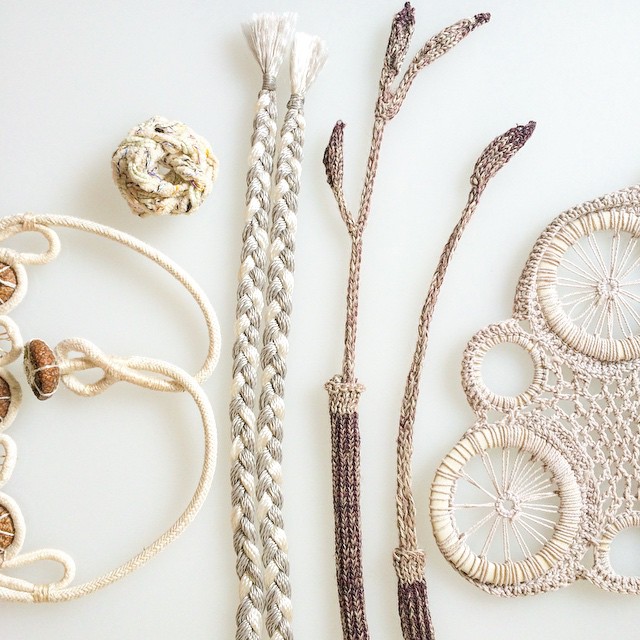 First up, when I saw this image it got me thinking about first causes, and what has transpired due to them.  In particular, the first cause of learning how to spin fibers into thread.  The possibilities we unleashed due to that simple invention are nearly limitless. Woven, braided, knitted and crocheted threads have created near all of what we put on our bodies, as well as filling our homes, our work places, and the transport we use.  Yet, all that vast and varied stuff, with so many applications comes down to fibers, spun into thread.  Something that simple has not only made a multiplicity of things possible, but has created work of many millions of people the world over.  And all because, of thread. 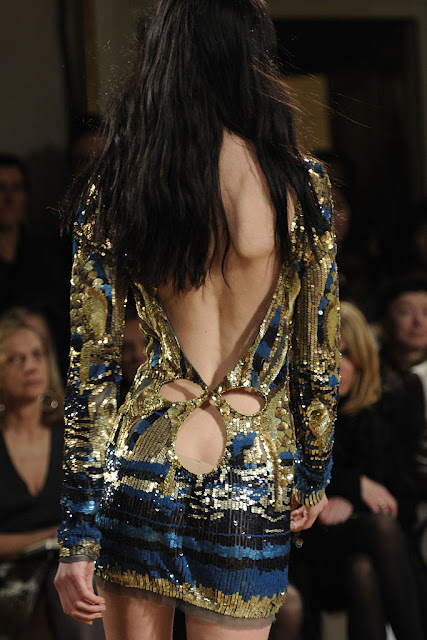 We have, most of us remarked that great wealth does not always include great taste, or style.  And not every couture designer always brings the best of taste to the runway.  Its rare that I would single out a design to point and and say. "Ick".  This is one of those rare moments.  I have no issue with its being short, or trimly designed, or body conscious.  Though such elements mean the potential client list for this is small, very small.  And I can applaud the use of color, and the quality of the embellishment work.  What I find dismaying is the clearly intentional, but ill-considered cut outs.  In particular the center bottom one annoys me because it dips below the model's panty line.  Look, if you are gonna do a butt crack reveal, then own it and give us the show.  Don't get coy on us at the last moment.  And then there's the sheer strip attached to the hemline. Its as though the designer wanted to say, "See? Its not really THAT short."  Um, yeah, actually, it is. 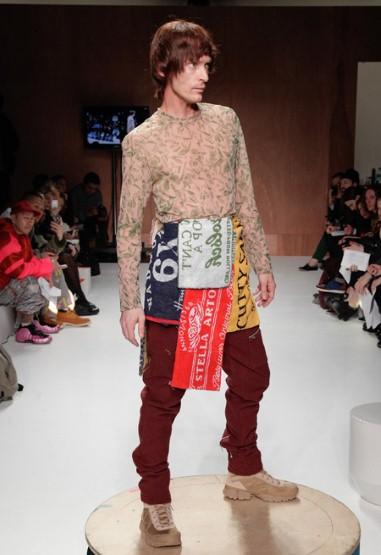 Intention is vital in design, things need to have a communicable meaning in order for us, the viewers to be able to get the idea being transmitted.  In this case a fairly conventional ensemble of long sleeved tee and trim cut pants is augmented with a hip wrap of disparate advertizing logos.  What I'm not getting here is the connection point between those things.  The outfit and the hip wrap, to me, at least, do not really communicate with each other, so I'm not able to understand fully what it is that I'm seeing.  If you get the message here, do let me know. 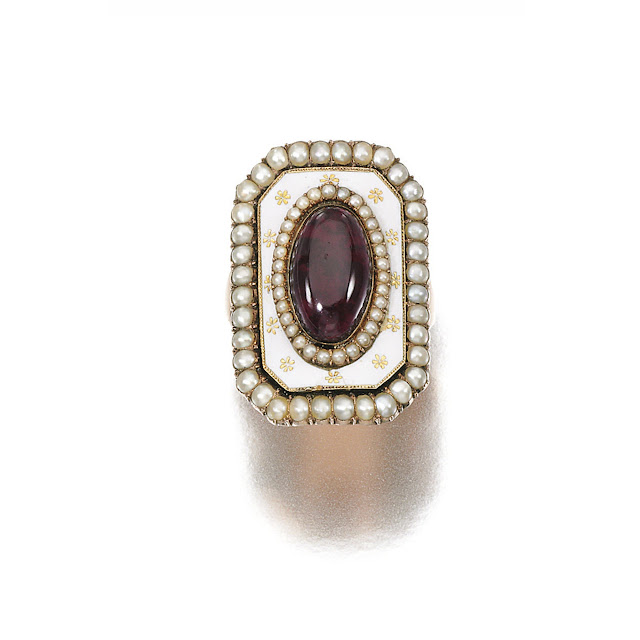 Not all mourning jewelry is black. This ring, from 1788 is made of yellow gold, with a plate of white enamel, decorated with seed pearls and surrounding an oval cabochon, foil backed garnet.  The back of the ring bears this inscription: 'J A died 10th August 1788 Aged 17".  Its a piquant reminder that people, young people died, often, back in the day.  Perhaps it was the real understanding that a loved other could be snatched away in a moment that made people ritualize the mourning process so much.   And apart from this piece's loveliness, there is the story it has to tell about love, and loss.  Beautiful. 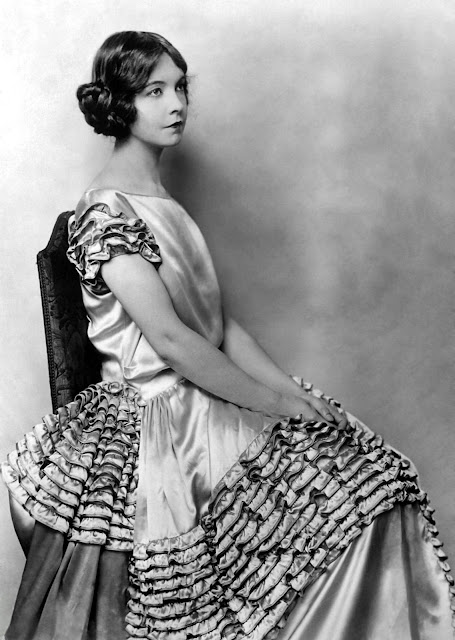 Actor Lillian Gish was known as quite a stylish lady, apart from her work as an actor.  And she was one of those who eschewed the Flapper style, and the Garcon' look for the softer, more feminine Robe de Style look promoted mostly by Jeanne Lanvin.  This satin frock is heavily decorated with parallel rows of ruching in the same satin material, that, were she standing, would accentuate the width of the Robe de Style skirt. 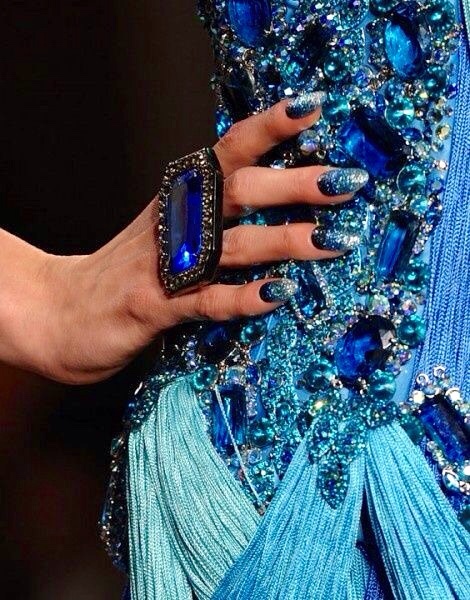 At the couture level, one of the things that has become a thing, of late is the use of ever larger, chunkier, rhinestones as part of the beadwork embellishments done on evening wear.  Its an interesting idea, and allows greater texture and complexity in the work.  Its also gotta weigh a considerable amount, when you think about how much all that leaded glass weighs.  But, beauty is pain, we are told.  I love the colors here, and I would love to see the entire thing, but this was found on tumblr, and a google image search has gleaned no info on who did this, or where it comes from. 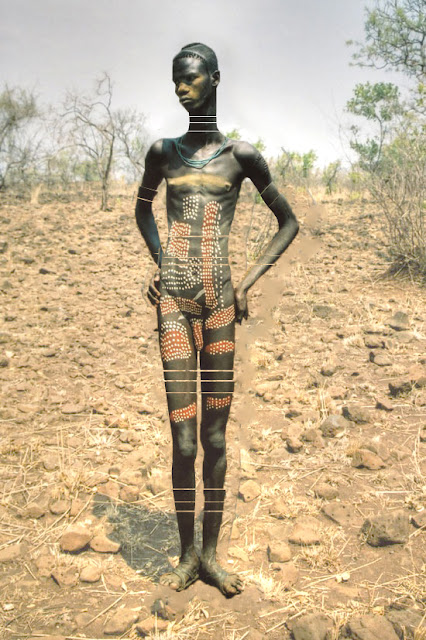 It took me a minute when I first saw this to determine that the image had been deliberately stretched to increase the subject's height. (thanks, photoshop)  But that aside, I was instantly struck by the body ornament involving colored mud and paints.  Its is surely one of the very first things we ever did, one of the first Attire words we ever devised.  And it makes me smile when I think that there are many places in the world where those same apparel words are still being used every day. 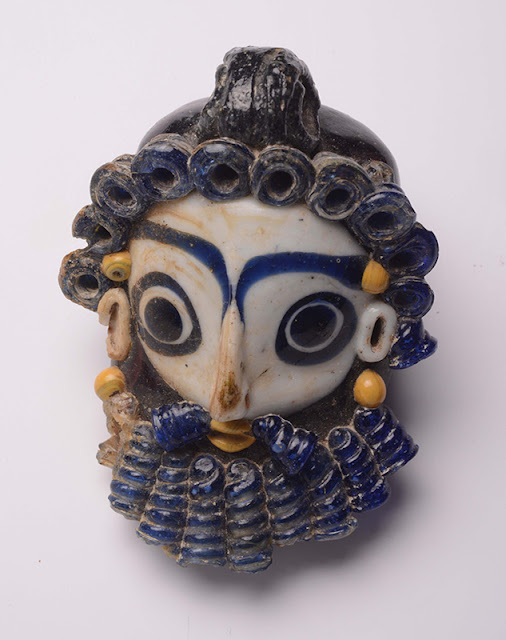 This is a real antiquity.  Made in the 4th or possibly the 3rd century BC this is a bead in the form of a man's head, made out of glazed glass paste.  It was found in Carthage.  There's something that feels lighthearted, lyrical even about the way the face is presented.  Certainly there is no intention to be serious, or menacing.  And the image, small as it is gives us a look at men's hair dress, and beard dress, that is supported by other images from the same era.  Men of status often wore their beards in ringlets, and the head hair, like that of women, was also worked in regular curls. 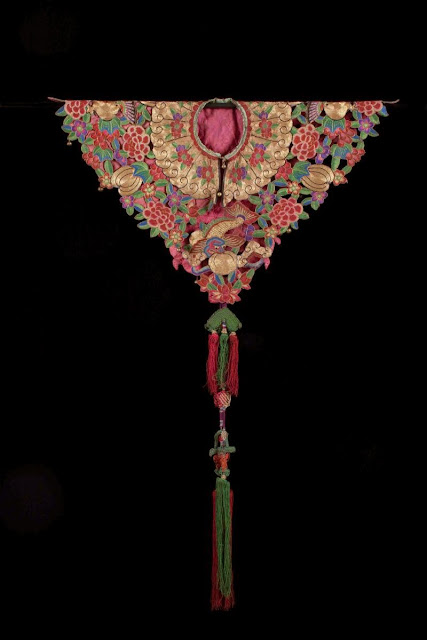 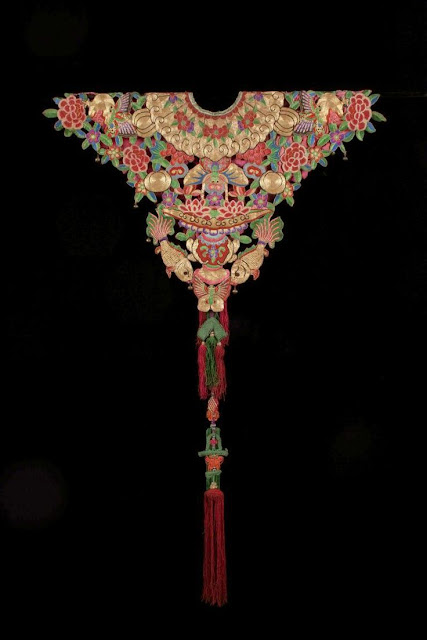 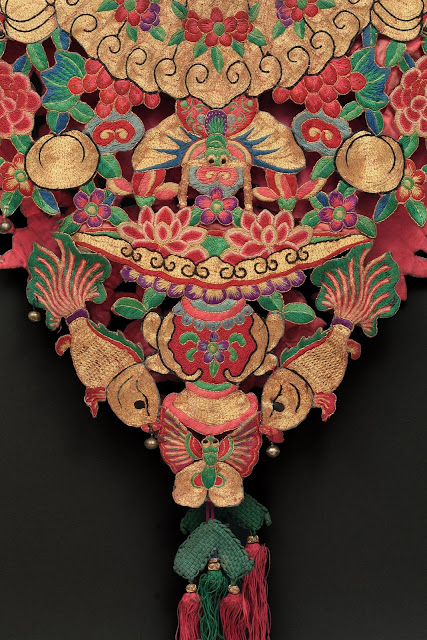 A fabulous thing is from the late Qing Dynasty in China, the final ruling Dynasty before it became the Peoples republic.  Its a lady's festival collar, and measures 38 inches tall and 25 inches wide.  So the bottom of the tassel would nearly sweep the ground.  The forbidden stitch embroidery was not permitted to be used outside of the walls of the Imperial city. This example is worked in an auspicious pattern of flowers and butterflies.  And the huge tassel is meant to sweep away evil spirits as the wearer walks. 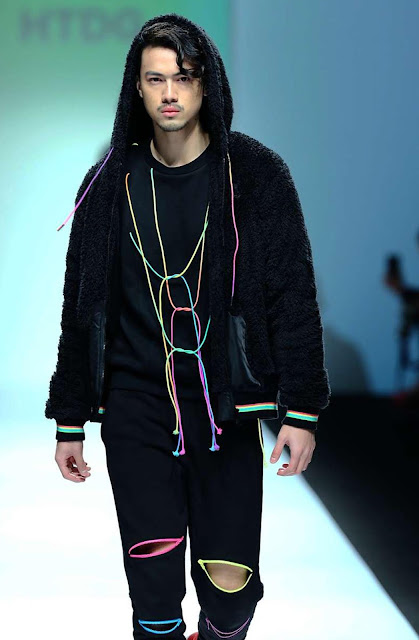 HTDG F/W2015.  Neon colors are back, children.  Yup, just when our retinas had recovered from the scorching they got in the 80s.  Mercifully, at least in this iteration, its small scale enough to be doable by most.  My only quibble here is I would find the design more interesting if the horizontal zips on the pants went clear around allowing them to be zipped off at different lengths.  And I like the jacket a lot, even with the neon striped ribbing. 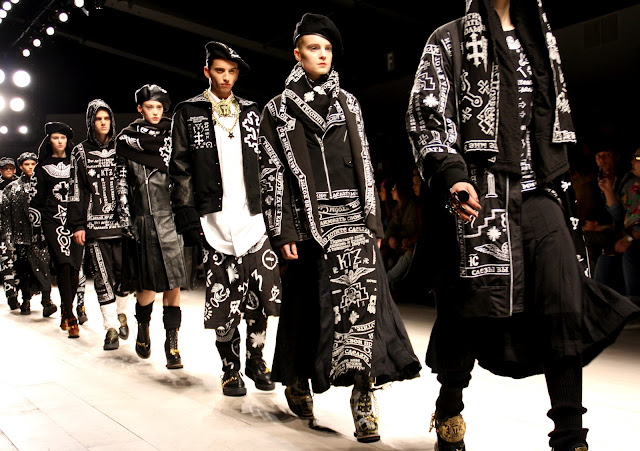 Avant Garde design house KTZ sent this collection of menswear down the runway in 2012.  Plastering the work with tons of religious symbols from many different beliefs, the collection has a good deal of emotional power; challenging us, even more with that aspect, than with the often unconventional garments themselves.  Its an adroit maneuver, really to draw the attention away from the structure of the clothes, which presented otherwise might make people resist.  But the imagery is so compelling that you have to look, and look closely.  I can see lots of things in this runway image that, devoid of the over scaled imagery on them, would actually be very workable clothing for those of the edgy mindset.  Bravo to KTZ.
And to round out this edition of scatter, something simply glorious.

The term jewel means more than a stone. it used to be used to describe any individual piece of the jeweler's art.  This remarkable piece is called the Apollo and Daphne jewel. It was created in the 16th century of rose gold, yellow gold, and several colors of both opaque and translucent enamel, all surrounding a large brown agate cameo.  It was altered in the 18th century to include the three pendant cameos, one encircled with rubies, the other with emeralds.  A truly dazzling piece of work.  People amaze me, constantly.


Thass all folks!  Have an Awesome Weekend!
Posted by Paul G. Ellis at 3:43 AM