During the years immediately past the Civil War in America a major shift began with regard to the silhouette of women's clothing.  Where for the prior two decades the bell shape of skirts had been doing a steady expansion, the apex of what could be done with the technology to hand had been reached and a consequent deflation began.  First, the skirts narrowed a bit on the front and sides, and the extra volume began to be moved to the rear, as a trained effect became fashionable.  it was the precursor to the first iteration of the bustle to show itself. 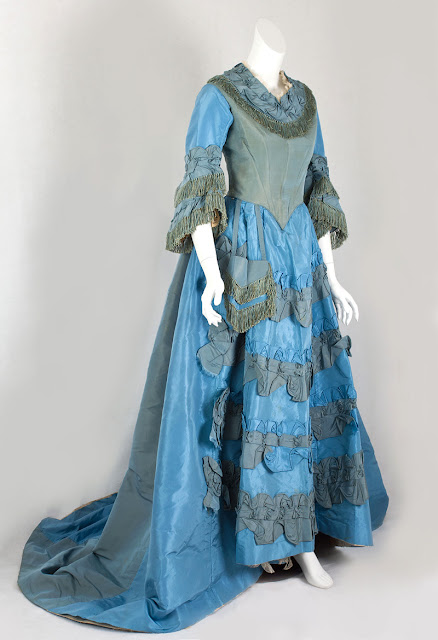 This two piece day gown of silk is made up in two aniline dyed shades of blue, Cambridge Blue, and the brighter, more emphatic Bleu de France.  The 3/4 length pagoda sleeves are a hold over from earlier styles of the 1860s, and the placement of the decoration on the skirt front recalls the styles of the 18th century. 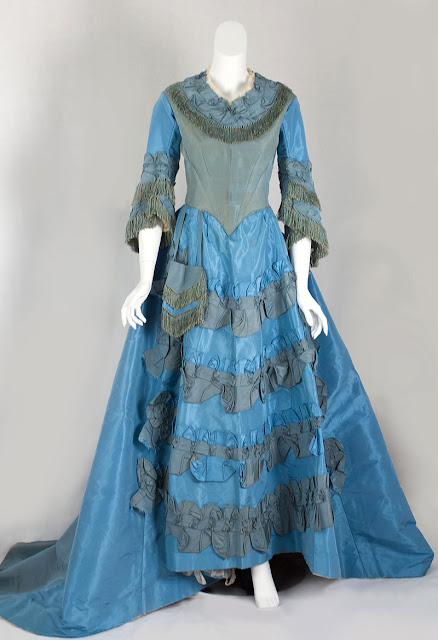 Apart from the self decoration involving both the fabrics, the only other material in use is fringe, decorating the collar, cuffs, and the charming waist mounted bag.  Sadly, the elaborately worked trimmings are crushed from storage.  So its difficult to imagine how this gown would have looked in its prime.  But try to envision all that decoration standing out and away from the body, adding significant drama and texture. 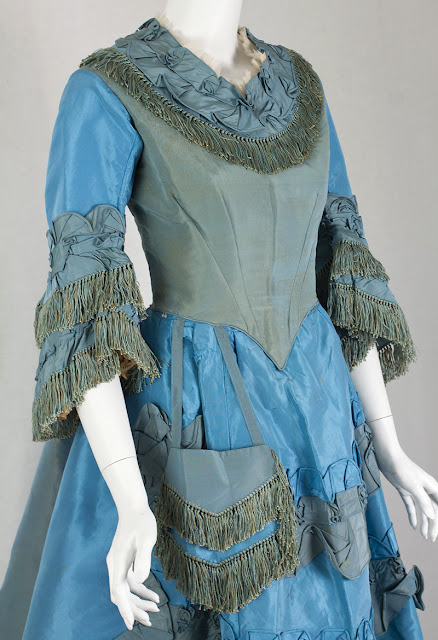 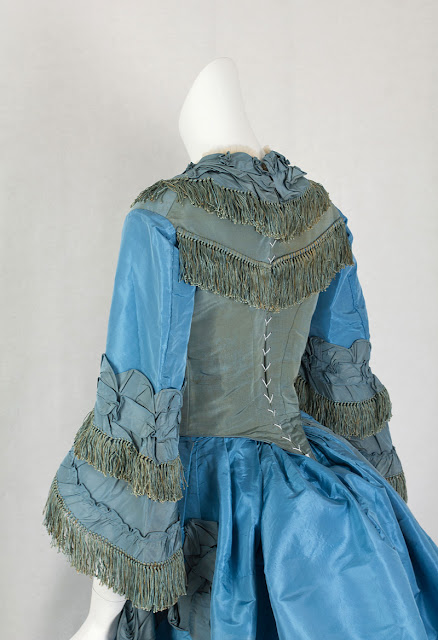 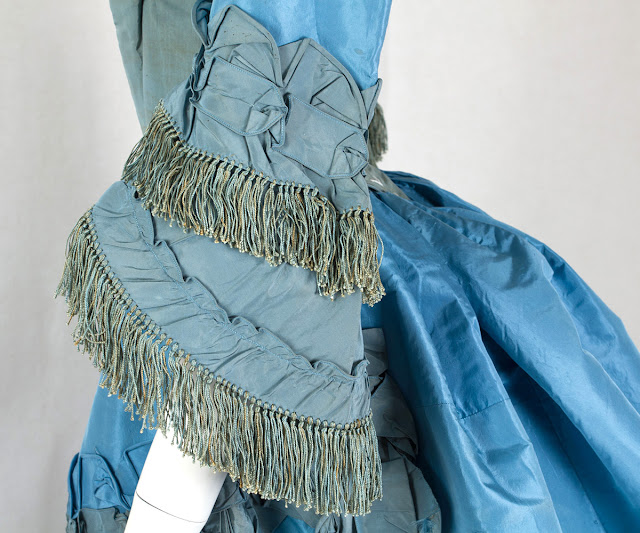 As aniline dyed garments of the time go, this one is remarkably restrained. The combination of the two blues is subtle, and very effective, even considering some fading. 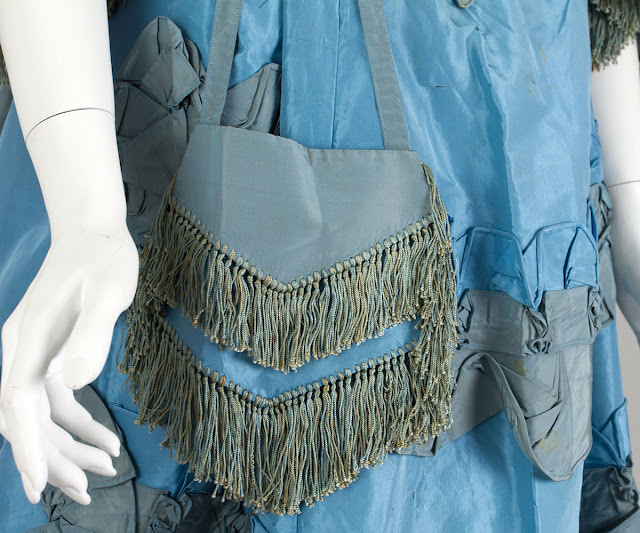 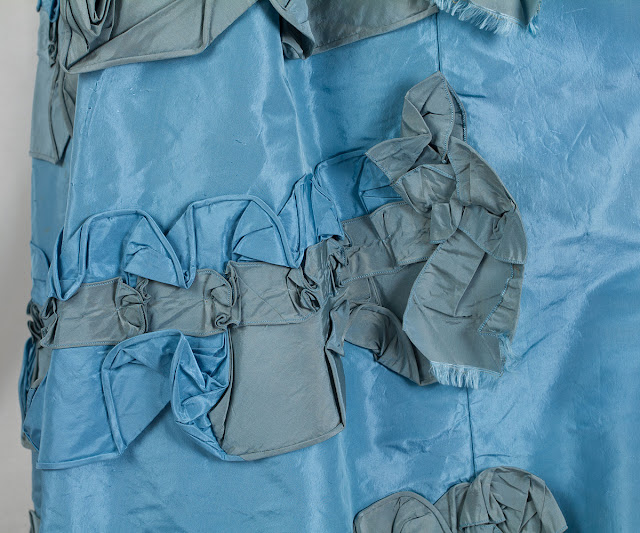 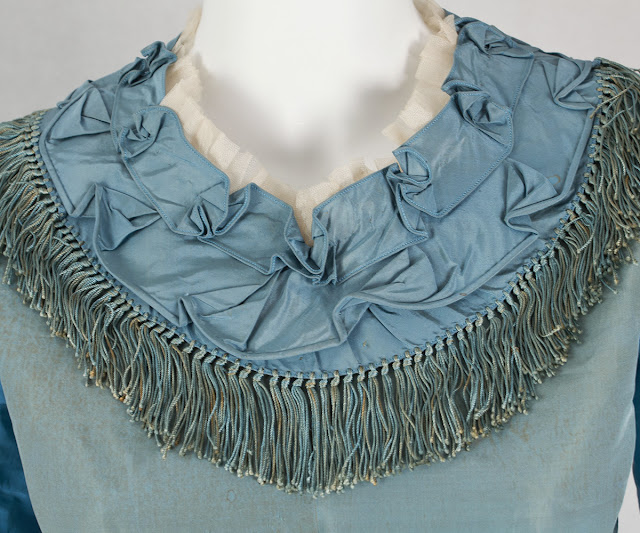 A dress of this sort would have been worn by a middle to upper middle class lady, while she was tending the daily tasks of organizing the household, and doing what chores she felt had to be dealt with herself.  Though it is, by the standards of the time, not an especially formal dress, it would have been acceptable as town wear, for errands, and also for receiving milady's daily round of callers.  It would not have been considered appropriate, however for making calls to others. 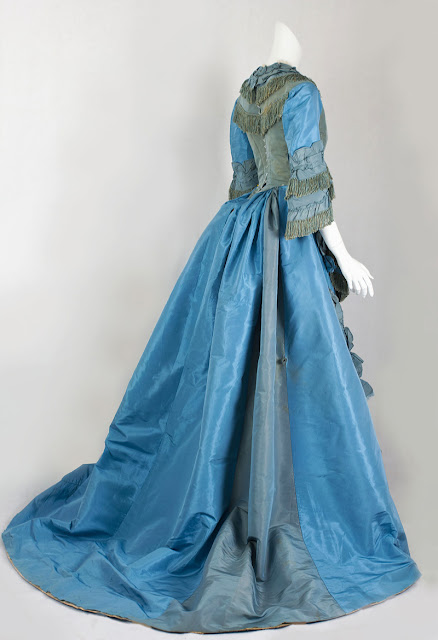 All in all, a charming dress, well executed.
My thanks to Vintage Textiles for this one.
Posted by Paul G. Ellis at 6:45 AM