I was in middle school, high school, and college during the 1970s. And yeah, we really did think that what was out there to wear was slamming hot. We did.  Come on all you 70s kids out there, you remember.  It was only later that we woke from our delusions and looked with horror at what had sartorially transpired; at what we had oh so willingly clapped on our backs. 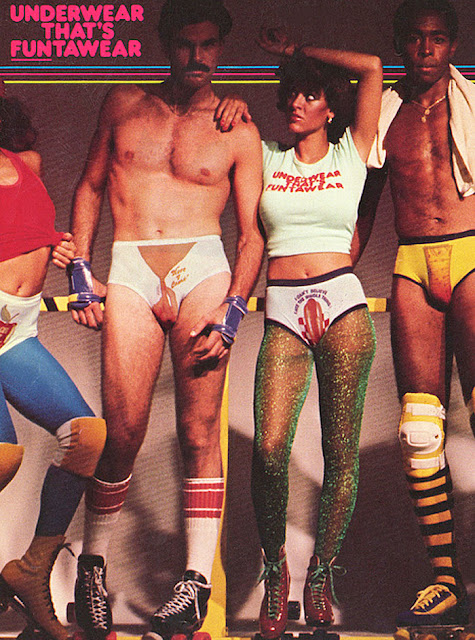 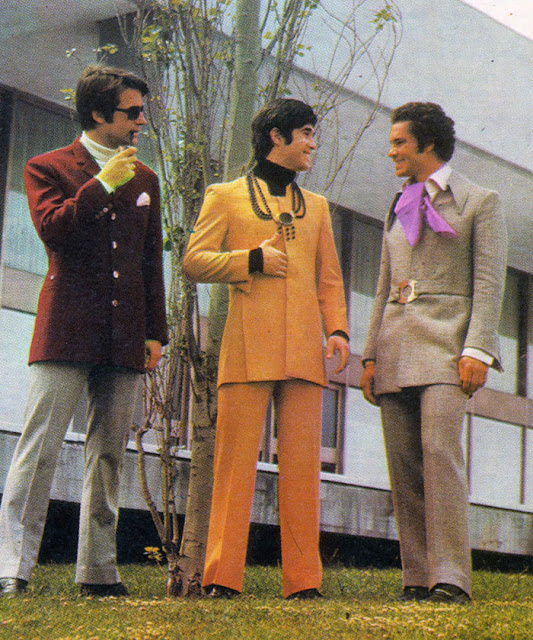 Its really a toss up who got the worst of it, the ladies, or the gents.  Today though, I'm gonna side with my brothers in double knit.  See, what had been going on is that we were dealing with the latter days of the Peacock revolution, in menswear.  Color, experimentation with pattern, fit, and garment type was running wild.  Its no wonder really that so many of those experiments would be really quite tragic failures. 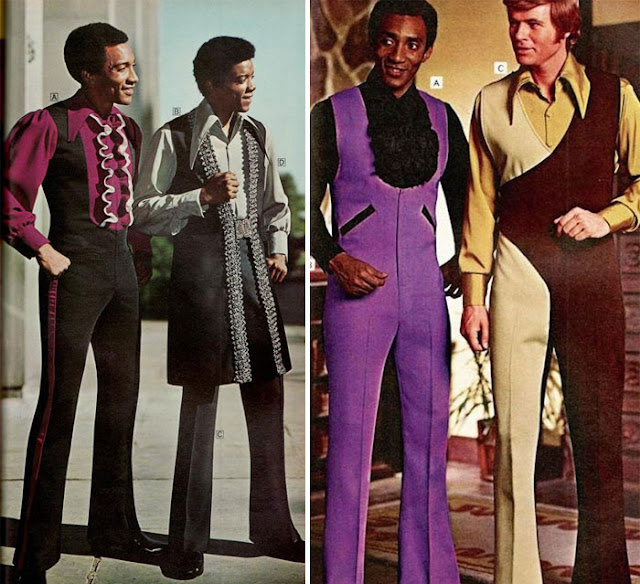 There were some major experiments that took significant hold, culturally.  First,  home knitted and crocheted sweaters, vests, and ponchos.  Yeah those crocheted ponchos did actually get seen on the street.  And many a guy had a sweater or two from some well meaning loved one, sometimes with belt loops, so you could do the belted tunic sweater thing.  I certainly had one, though mine was store bought.  And of course most of these things got made up in the fairly new acrylic yearns that were out there.  Scratchy, lumpy, and difficult to make up smoothly, those yarns were the ubiquitous material of choice for home knitters.  Why?  The colors were bright, and the yarns were inexpensive. 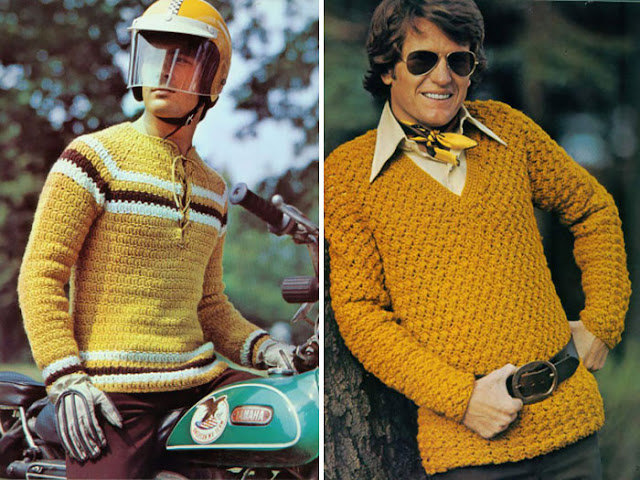 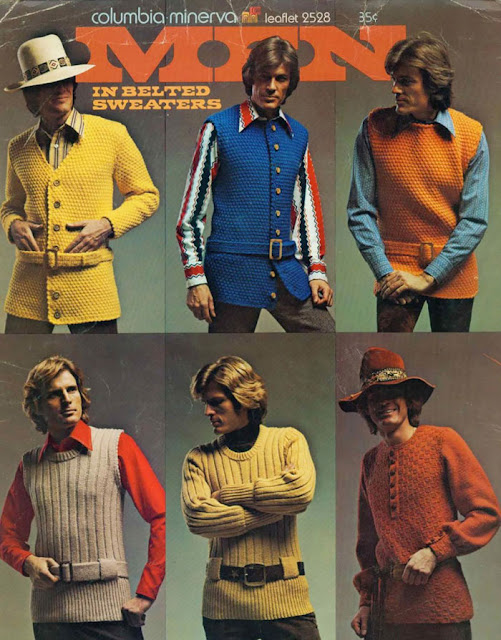 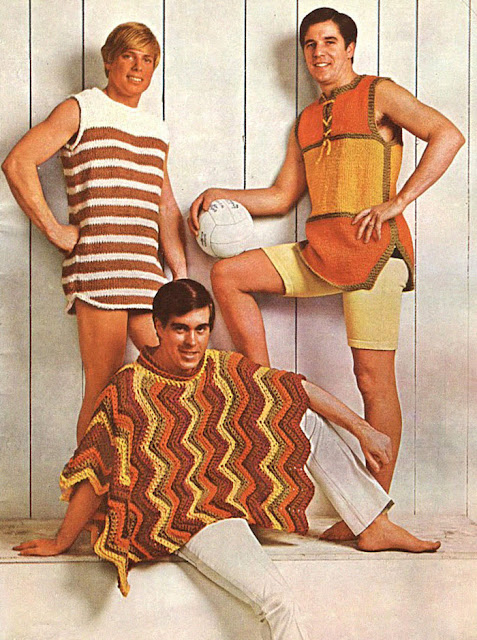 Next up was underwear and lounge wear that got lots of experimentation.  Colorful, often matching tee shirts and briefs, tricot lounge pajamas, and all sorts of more overtly sexy underthings began to appear, admittedly, mostly in those catalogs aimed at gay men (though no one would admit that's who they were for).  And of the various things that got trotted out, fun, sexy underwear was the only thing to become a continuing part of the menswear lexicon of Attire. 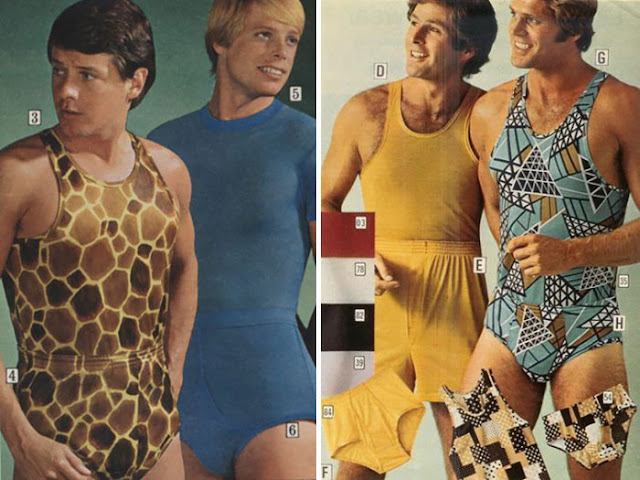 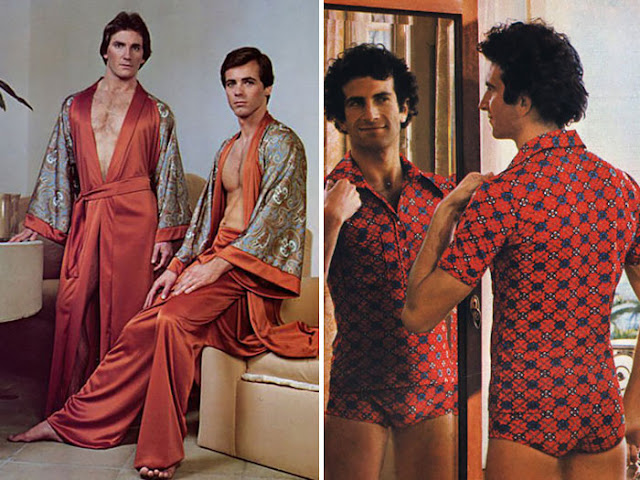 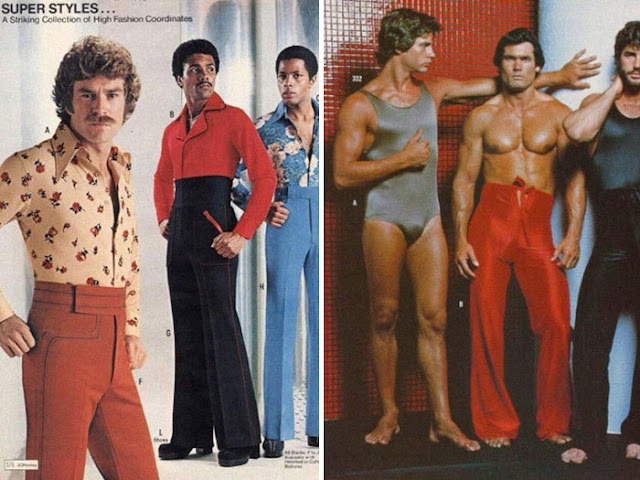 Polyester double knits.  Ah, how much, and how far they spread.  They were uniformly uncomfortable, stiff, and nearly impossible to maintain well.  They held onto stains forever, snagged with the least provocation, and if you made the mistake of leaving them in the dryer a few seconds too long, wrinkled, eternally. And yet, everyone had clothes made of this material.  My unlamented High School graduation suit was a three piece, embossed double knit suit, in mint green with dark green top stitching and lapels wide enough to allow me to take to the air.  I still shudder thinking of how stylish I felt. But I did feel so, because, at that moment in time, I was. 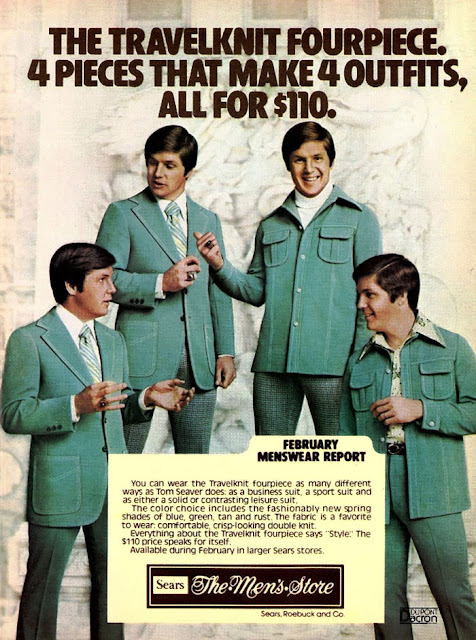 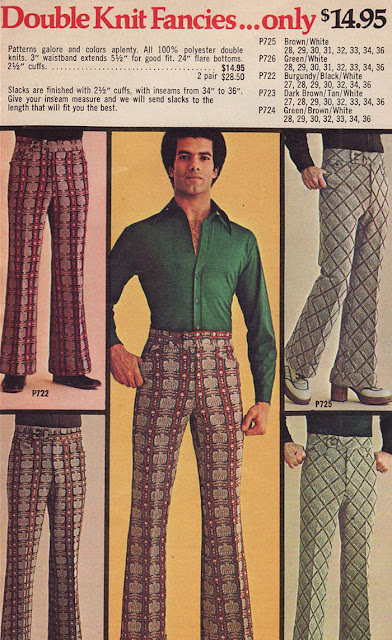 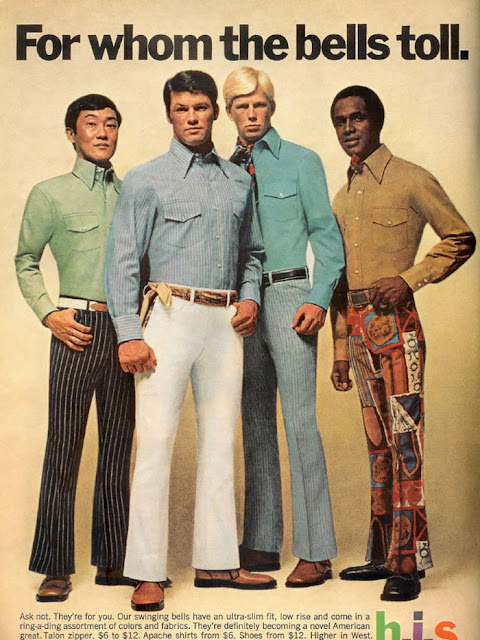 And that's part of the point.  Regardless of how silly, ill considered, or down right stupefyingly ugly a fashion might be, if it taps something in us that connects, we take it up, for a while.  To me, such things are like slang terms in spoken languages, they have their usage, and their short lifespan. Its only a few new Attire words each decade that get to stick around, because what they contribute to the overall worn dialog is significant.
So, though the 1970s was full to overflowing with new ideas, and new Attire words, clamoring to be taken into the official lexicon, only a few things remain, but transformed by time.  The rest of these notions, deliciously silly, can rest in our minds as reminders of how each time creates its own definition of attractive, hip, and stylish. 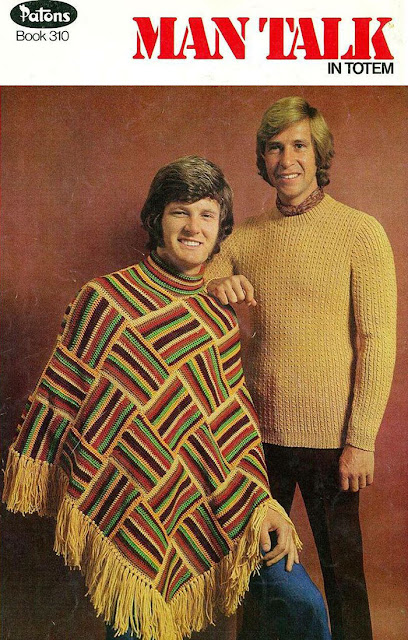 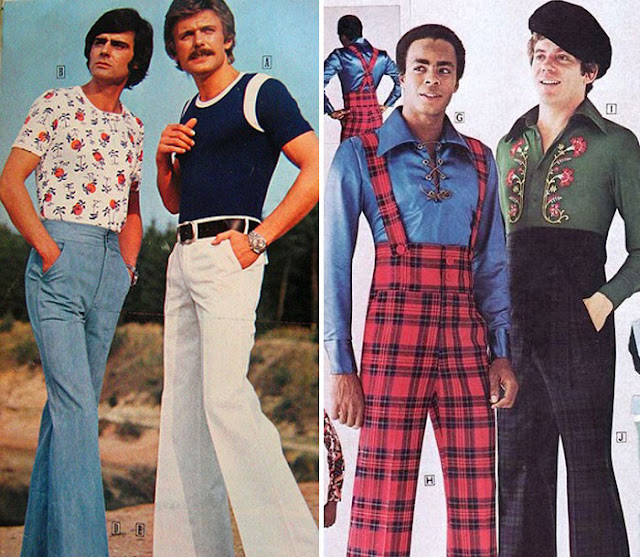 Post Script:  I want to thank my friend Mary for hooking me up with these unintentionally hilarious images.  Soon as I saw them I knew what I had to do. (grin)
Posted by Paul G. Ellis at 3:31 AM