Hello again, my friends. The wheel of the week has turned once again, bringing us back to Scattertime.

Here are the things clogging the systems of my addled brain this week.  Honestly, I wish I could do three times as much of this, considering how many things I find that seem worthy of comment.  There are, sadly only so many hours I can give to this pursuit.  So here's your round dozen of randomness for the week. 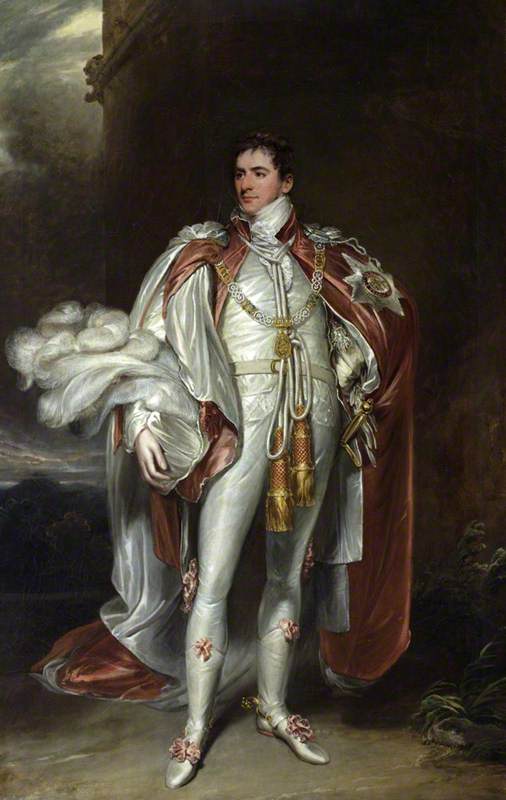 This painting by John Hoppner done in 1804, is of the Honorable Sir Arthur Paget.  He's dressed in full high court regalia, suitable for a visiting monarch, or a royal wedding ceremony.  The trousers conform to the prevailing taste for extreme tightness, making it appear that he only has on some sort of leggings.  The matching white satin boots, trimmed with pink bows, rather offset the unsubtle cue of the gigantic tassels hanging precisely in front of his crotch.  He has on his order collar, and the satin cloak is embroidered with a massive badge, quite likely the order of the Garter.  Portraits of this sort were meant to chronicle the position of a nobleman.  This one is trying very hard indeed to elevate the supposed position of the gentleman portrayed.  As an Honorable, he was fairly low on the noble totem pole, but this image does all it can to give him importance.  His hairstyle is on point with the early part of the 19th century, with its deliberately, and romantically disarranged styling. And I really with I could see that vast plumed hat better.  It appears to be a high crowned, satin covered hat with a rose colored ribbon cockade holding that towering spray of curled ostrich plumes.  He probably looked rather silly in it. 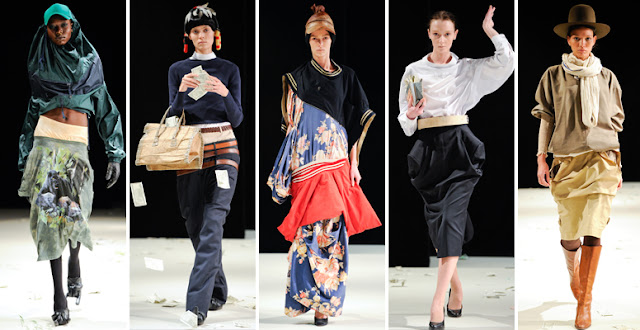 Designer Miguel Adover loves messing with proportion.  I find that a lot of these are interesting for that reason, and because they mix unexpected textiles together.  Adover's voice is one of the newer ones, and he's taking this globalization idea and really running with it.  For me, the faves here would be the center, and the one to its right.  I also love that he's taken the idea of low slung, elastic waisted garments and turned them on their head.  Intriguing work.  And I think he will speak to a lot of the newer generation. 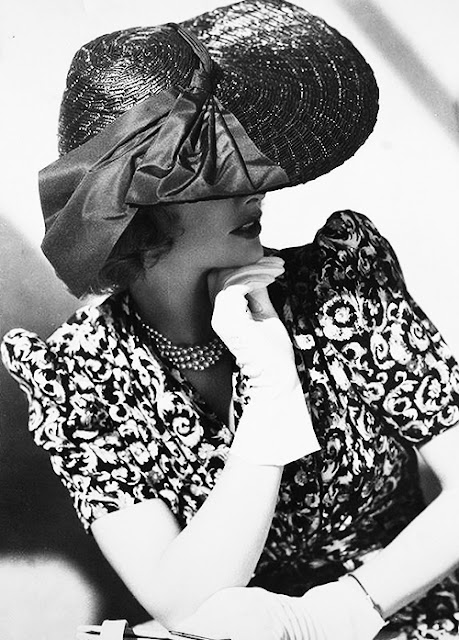 For as long as there has been a fashion industry, there has been a connection between famous beauties and actors, and presenting fashion to the public.  Back in the day, top level actors were dressed by couturiers, not only for the street, but for their stage roles.  And many is the actor who posed for the camera to promote both their career and the designs they were asked to wear.  That continues today, and has only ramped up now that actors are working with stylists who establish relationships with design houses so that every time their client is photographed, they are wearing something new.  I find it interesting that actors on one hand are happy not to be in thrall to studios, but are all too willing to enmesh themselves in this other way.  Who is this? Why its none other than Lucille Ball in a fashion shot from 1940. 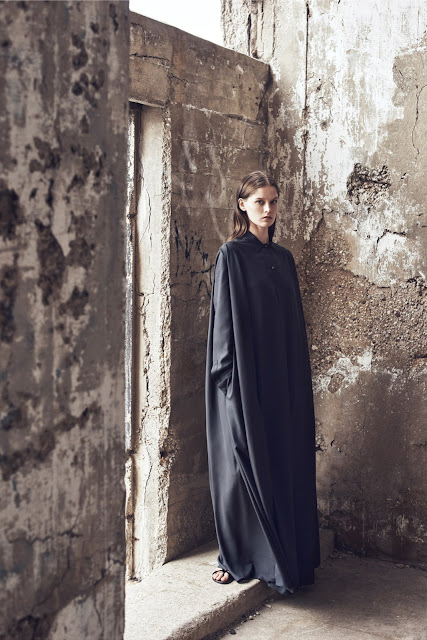 Monastic simplicity can be a powerful thing.  This resort outfit from the Row somehow manages to be both subtly sexy and primly intellectual.  Its a kind of dressing that I could easily see working its way further into the daily Attire dialog.  It can be worn by anyone, at any age.  Sure its not groundbreaking in the sense that people have been wearing similar things for literally thousands of years.  But in Western culture, its pretty much evaporated. Perhaps we should re-visit this as a rational option in our busy world. 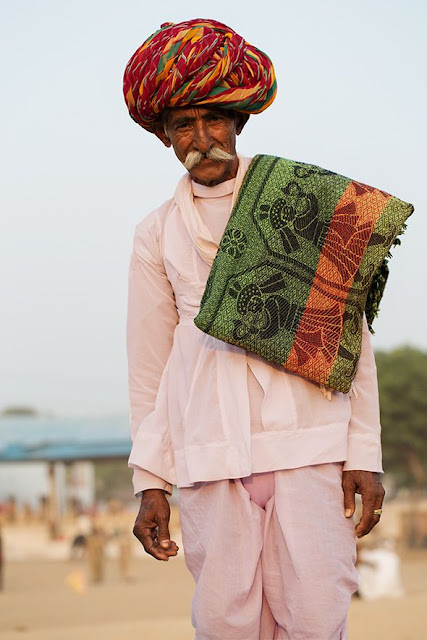 This gentleman from Pushkar, India just made me smile so much.  It reminded me of what Diana Vreeland said. "Pink is the beige of India".  But the other part, which I am sure was entirely unintentional is the harmony between the brilliant pattern of his turban, and the larger pattern of the blanket over his shoulder.  It puts me in mind of how eloquently we can communicate with pattern, especially if we learn to combine them to good effect.  Our sartorial language would be far less interesting, and less expressive without pattern in textiles. 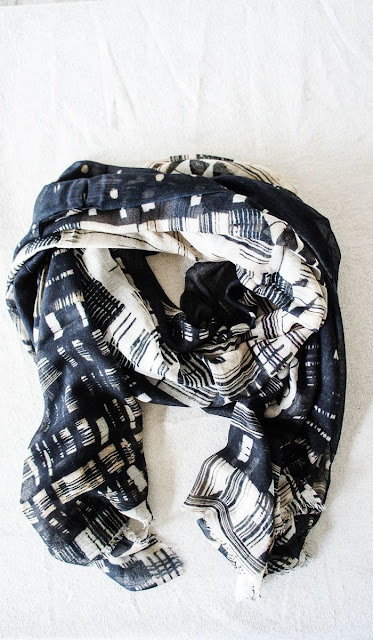 Indigo.  Its one of the oldest dyestuffs know to humankind. And though we cannot know for certain, it seems to have emerged from India.  What is interesting to me is that Indigo has been around as a dye color for so long that it has developed a deep connection to us psychologically.  We might not be able to voice just why, but there is something about that tone of blue we find stable, comforting, and satisfying.  Perhaps its simply the easy familiarity of it, since it appears in nearly everyone's wardrobe in one way or another.  Any way you choose to see it, that color is profound in its effect on us. 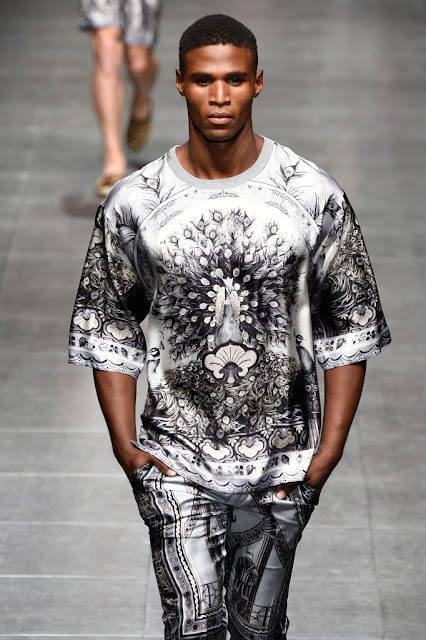 Computer printing in textiles has taken what would have once been wildly expensive and made it accessible to a much broader range of people.  Precision printing like that here on this Dolce & Gabbana ensemble required exact handling, and high level machinery to produce accurately without bleeding, smearing or printing off true.  Computer controls and robotics are leveling that field, bringing more complex prints that are cleaner, and more clearly printed than ever before possible.  Just another way that the Attire language is being pushed along by technology. 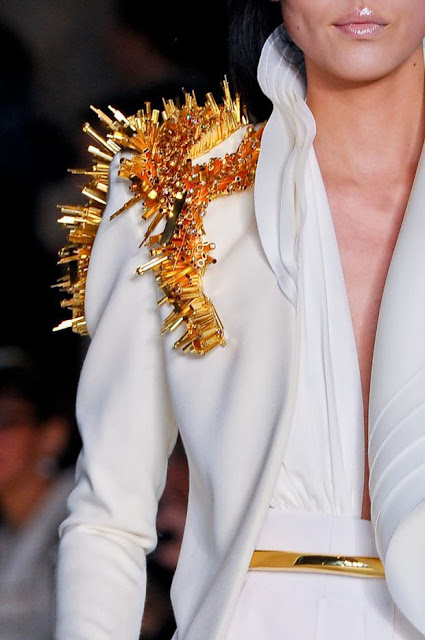 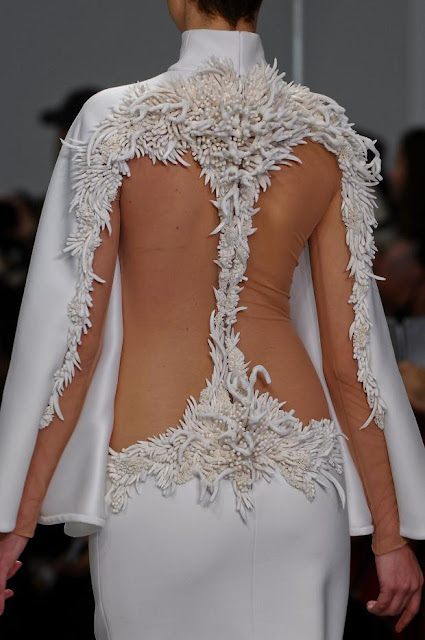 Surface embellishment seemed for a time to have gotten stuck in time.  It became for a while the province of staid, conservative people.  Designers like Stephane Rolland are changing that, using new techniques, new types of beads and sequins and thinking entirely differently about where and how to do this work.  These two images express some of what is out there being done.  Deeply sculptural, and inspired by natural forms like crystal clusters and corals, these two detail shots make the point, beautifully.  I can't honestly say that I'm in love with the dress with the illusion sleeves and plunging back, but I admire the embroidery work absolutely. 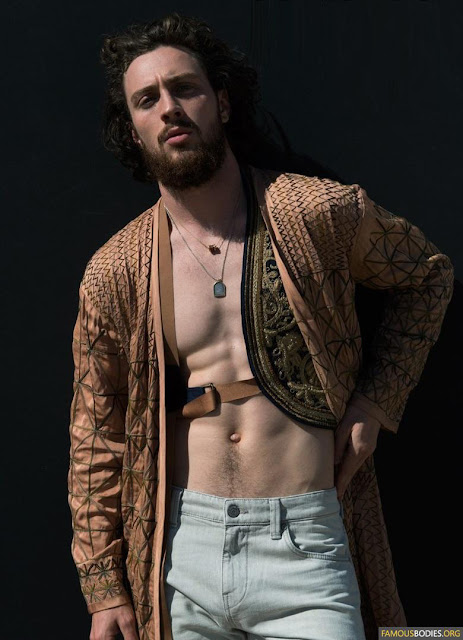 This embroidered harness thing just keeps getting brought out in men's fashion editorials.  This image, from Flaunt magazine  has it placed under a coat, where its been shown over jackets and coats before.  As an accessory, its an interesting idea.  And I could see it actually taking off as a popular item, particularly if that embellished part has a pocket in it for your phone or billfold.  Also, I do like its being paired with that floss embroidered coat.  And add a simple cotton t shirt, rather than the bare chest and I think a lot folks could be on board. 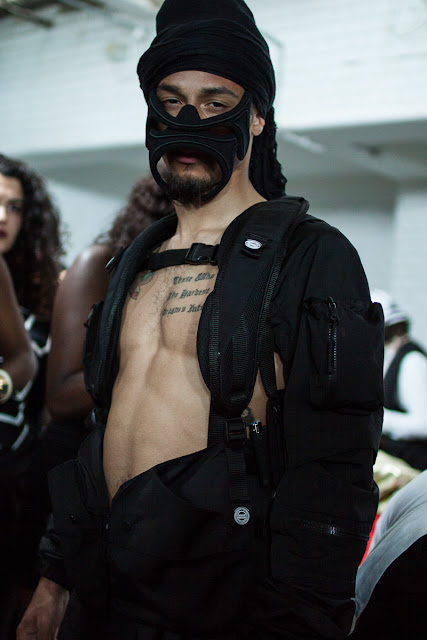 This look, by Nasir Mazhar is something of a head scratcher to me.  That the face mask thingy is clearly a runway only idea, and it muddies, rather than emphasizes the idea behind the apparel. I get that we are going "Urban Guerilla" here, possibly even survivalist.  And as such it could actually have traction in the real world with those folk.  The unrelieved black, though, makes getting a sense of the true structure difficult. 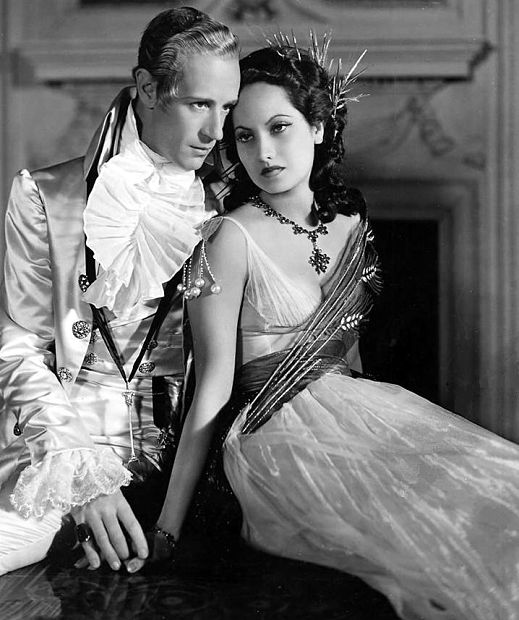 Leslie Howard and Merle Oberon, dressed as their characters in the Scarlet Pimpernel.  We are supposed to believe that this is very late 18th century England.  And there are aspects of this that express the time, though the exaggeration of it is extreme.  But given the time this was made (1934), and the foppishness of the lead characters public persona, I can forgive it.  Where things fall flat is in Oberon's costume.  Her gown is essentially a straight up evening frock from the 30s.  Only the organdy sash, her hair and jewelry define time here.  Still, faults aside, this is great work.  Thanks, MGM! 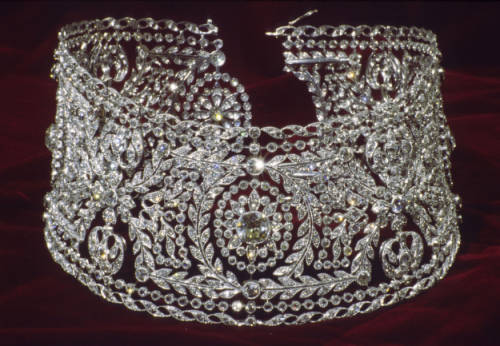 Last up today this crazy piece of dazzle.  Dog collar chokers were very popular at the turn of the century, and they appeared in many iterations, including this incredible one that belonged to heiress Bertha Palmer.  A lady wearing one of these could barely move her head, but who cares?

Well, what can I say after that?
have an awesome weekend all!